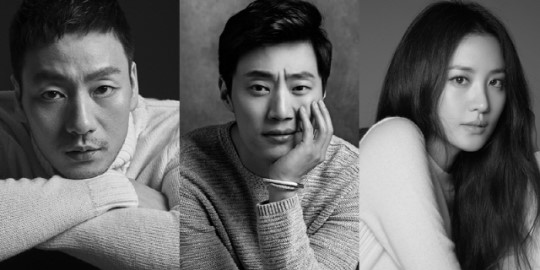 The title comes a mythological creature from Greek mythology: the Chimera, a fire-breathing monster with the head of a lion, the body of a goat, and the tail of a snake. In the drama’s story, the three leads will be working together to investigate an old mass murder case — called the Chimera Incident — and to track down the “Chimera” behind the deaths. The initial incident happened back in 1984, when an explosion accident became the start of a series of murders. However, this past case becomes a crucial starting point as a similar situation is now reoccurring in the present day of 2019, more than 30 years later.

The three actors will also be playing characters that seem to be related to each other in some way. Park Hae-soo’s character Cha Jae-hwan is a man who spent his childhood in a public institution and grew up to become a police detective in the violent crimes division.

Lee Hee-joon plays Lee Joong-yeop, whose character was adopted as a child and relocated to England with his new family. After becoming a doctor, he returns to South Korea and becomes involved in the Chimera investigation.

Soo-hyun (who also goes by the stage name Claudia Kim) plays the character of Yoo Jin. At a young age, she was adopted by a family in the U.S. As an adult, she joins the investigative team having once been a profiler for the FBI.

The broadcasting station has not yet been confirmed for Chimera, but the drama is currently being planned to air in the latter half of 2019.

Okay, this is exciting.

Firstly, this actors aren't explosively-popular ones. I can attach the boys to about two good stories each, and I don't know the actress. But something tells me that means they're really going for talent and uniqueness over anything else.

Secondly, chimeras? Awesome. Just joking, though, I did actually read the whole article. 😆
I love me a really great, heart-pounding thriller, and I haven't really caught one since Mistress, or Signal before that. Does the future finally hold good things...?

I love the cast already and if done right the story can be quite engaging by it's genre...I just hope OCN picks it up as the plot is right their alley...

Yess! Excited to have Park Hae Soo back in dramaland. He and Lee Hee Joon are my favorite actor but I don't remember I watched any Claudia Kim work before but I'm looking forward to seeing them.

This has me wondering whether the serial murder is a case that happened in real life? (Just like some of the cases in signal and voice)