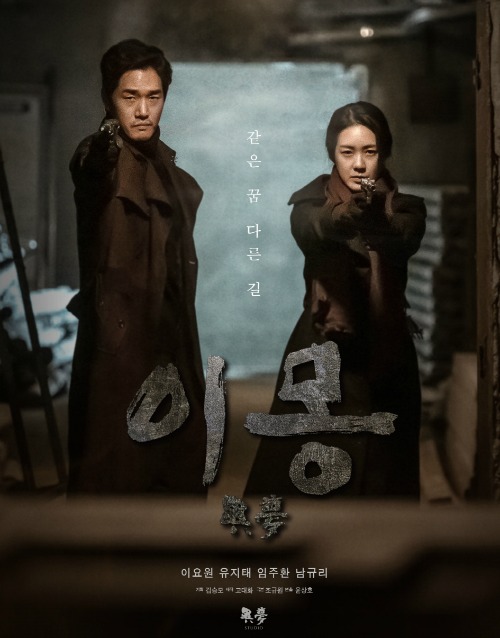 Reasons to watch: Different Dreams is an epic historical spy melo about the Korean independence movement brought to us by the director of Legend, Yoon Sang-ho, and the writer of IRIS, Jo Gyun-won. Taking place in Seoul, Shanghai, and Manchuria, the drama is set during the Japanese colonial era of the early 20th century. Yoo Ji-tae will be playing the drama version of real-life Korean independence fighter and leader, Kim Won-bong. Lee Yo-won will star opposite as a young doctor named Lee Young-jin. She was born to a Korean family, but after her parents were killed she was adopted by a Japanese family and raised as a Japanese woman. However, in adulthood, she decides to join the independence movement and begins a double life. While she works as both a doctor and secret agent for the resistance, she meets Im Joo-hwan, a Japanese prosecutor. He develops unrequited feelings for her while acquiring an admirer of his own, a jazz singer played by Nam Gyu-ri.

Hopefully it won’t be heavy on the unrequited loves and romance... I like this time period and the main cast so I’ll probably check it out.

and is it too much to hope that they include at least one requited love story--even if it means taking a little bit of creative license?

I'm so looking forward to it

I'm fascinated with this time period in Korean history so I'm excited about this new drama. I hope it's easily available to watch and not one I need to hunt for in the dark and risky web sites. (missing DramaFever)

Check again, it's going to be on Viki!

It will be on Viki

Saturday? This Saturday? Yoo Jitae is coming back this Saturday? Am I ready?
As for Lee Yowon and Nam Gyuri, I recently watched 49 Days to fill my Jung Ilwoo time between episodes of Haechi. Both exceeded my low expectations (unchanging blank facial expression by Lee Yowoon, overacting by Nam Gyuri) and I enjoyed their performances. Meaning they're no longer on my Do Not Watch list and I'll be able to enjoy this new show. Yay.

Japanese colonial era? Im Joo-Hwan?? How did this fly under my radar? Sad that he’s again reduced to “second lead with unrequited love,” and I hope the story will be much more than the love polygon, but I guess I’ll have to at least give it a chance.

Ohhhhh intriguing but my cup's way too full right now. If it turns out really good, I'd pick it up.

I was thinking Gaksital + Age of Feeling but I didn't want to jinx the show. If anyone blames me, I'm gonna point to you first.

O__O I didn't even realize the Joowon connection. They're such different classes of drama. *throws in Cantabile for maximum confuscation*

It sound like an interesting show. I hope it gives it aroma of it feeling.

I feel like I should be excited for this, but between the writer of iris 2 and the time era(post-jeongjo? with no jung hyun min? goodbye.), I'm noping the f out of this one.

Is Im Joo-hwan being typecast? He was the second male lead with unrequited love in all the dramas I've seen. I guess it can't be helped lol, he does have that SML package: tall, handsome, soft facial features, can act conflicted characters with crazy eyes when betrayed/ turned jealous. I hope he can get some breakthrough role because he seems to be capable of more than just a nice and/or pathetic SML.

He’s been main lead in a couple shows, but not recently. He is capable of so much more, and it makes me so sad. :(

Melo? A spy drama that's also melo? Um, I'd expect it to be more of a spy thriller, so this should be interesting. I love this era, both kdrama and cdrama and it's on my coming soon on Viki.