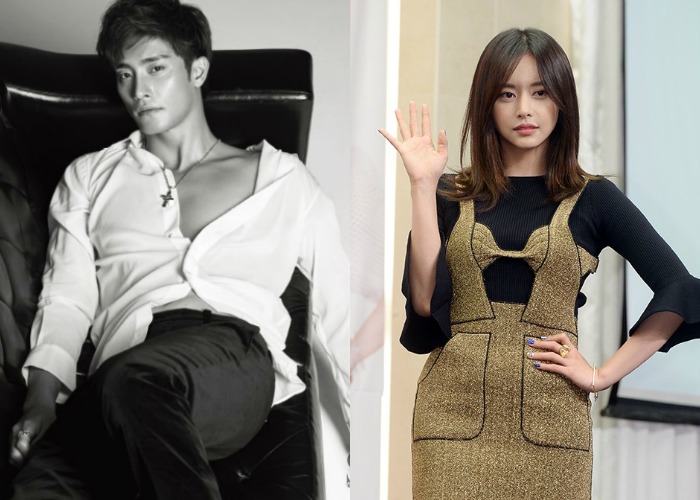 Sung Hoon (Can You Hear My Heart 2) and Han Bo-reum (Memories of the Alhambra) have confirmed they will be playing the lead roles in the upcoming MBN drama Level Up.

The rom-com will follow a restructuring specialist, played be Sung Hoon, as he joins a struggling game company and works to save it. He joins forces with Han Bo-reum, the game company’s CEO, who’s both a hardcore gamer and a talented game developer. She has a burning passion for gaming, but while Han Bo-reum runs hot, Sung Hoon runs very cold. It’s inevitable that they would butt heads and bicker like crazy, but there’s an attraction that eventually blooms.

Sung Hoon’s character is named Ahn Dante (shout out to the classical music fans among us!) and his career has only seen highs. He’s a star at his firm with a 100% success rate, which is how he comes to take the reins of said struggling game company. He’s chic but aloof and doesn’t wear his heart on his sleeve.

Han Bo-reum will play Shin Yeon-hwa, the founder and hardcore gamer who enlists Sung Hoon to help save her company. She begins to create a new game in an effort to save the company–as well as to satisfy Sung Hoon.

This will be the first lead role of Han Bo-reum’s career. The only role I’ve seen her in was Memories of the Alhambra and she was flat-out vile, so I’m looking forward to seeing her as a cool and lovable character.

PD Kim Sang-woo and writer Kim Dong-kyu are attached to the project. Level Up will premiere on July 10 in the Wednesday-Thursday slot on MBN.

Will Shin Yeon-hwa mess up Ahn Dante's tempo of operation?

How do you like my lame classical music joke, with a little EXO reference, @stroopwafel? 😅

Oddly enough I read Ahn Dante as Al Dente and thought it was a cooking reference.

Music, food -both things we need to survive body and soul so both are winning, @cloggie!! 😆

Anybody watch Sung Hoon's I Picked Up a Star on the Road?

Yes, I did. Thoroughly enjoyed it and it's whack sense of humor.
Also, second lead is just delicious!

Yes, even in the midst of my drama slump I watched the whole thing! Several levels of crazy, but I think Sung Hoon did really well in it. And I still want that rooftop apartment for my own!

Wasn't it gorgeous? The view was drenched with color-crayola brights everywhere!

Ohh, she's going to be a programmer. The programmer me dearly hopes that she won't end up like the female lead in Blade Man, who is an insult to all female programmers.

Sung Hoon's pretty but he's such a bad actor. He was so flat in "My Secret Romance".

If you had seen him in "Five Children" or the secondary character he played in "Oh, My Venus" you would not think that. And he was really good in the short episode drama "Noble, My Love".

"My Secret Romance" suffered from bad writing - and wasted the talents of a number of good actors.

I've seen "Oh My Venus" and I still think that.

I blame Song Ji Eun and the writing for "My Secret Romance".
120 ep of "Sweet Home, Sweet Honey" has convinced me she can bring down the acting of Laurence Oliver.

the pairing is interesting and i'm really excited to see han bo-reum again, crossing my fingers it won't disappoint!

At least one commenter has complained that Sung Hoon is getting type-cast. That is not always a bad thing: John Wayne was typecast. If being type-cast gets you a lot of lead roles then it is not a bad thing at all.

But I still says that it is totally unfair to the rest of us for any man to be that good looking.

Meh about the MBN station and the plot.
I like that the girl will be the gamer and developer though.

Sung Hoon is so fine to look at. I liked him in Oh My Venus, but could not finish My Secret Romance (the cringey writing).

Quite happy for Han Bo-reum as i like her a lot based on her previous roles even if she played her fair share of evil ones(she was great in Go Back Couple)...I see another Ahn Dante,NGM should meet him and make a duo...

I really liked Sung Hoon in Oh My Venus, but then I watched My Secret Romance and his acting just wasn't that great :/ I'm slowly watching his most recent drama, and his acting is better but.... still leaves me wanting a bit more if that makes sense

I really haven’t liked any of Han Bo Reum’s roles, and I’ve seen many many. I know it’s not her fault because a side cast can only act what they’re dealt. Hope her character is more likable this time.