After getting into an accident, a bumbling office worker thinks the murder diary he's picked up actually details his own serial killings. As he tries to convince himself that he's a deadly killer, he comes in contact with the actual madman who wants his diary back.

After getting into an accident, a bumbling office worker thinks the murder diary he's picked up actually details his own serial killings. As he tries to convince himself that he's a deadly killer, he comes in contact with the actual madman who wants his diary back. 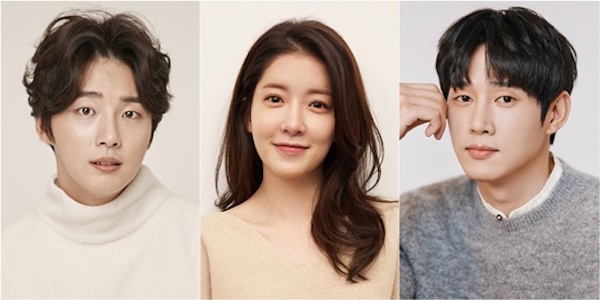 Get ready to explore the mind of a killer in Psychopath Diary! This tvN drama recently secured its main lineup, and it looks very promising: Yoon Shi-yoon (Nokdu Flower), Jung In-sun (My Secret Terrius), and Park Sung-hoon (Justice).

Psychopath Diaries begins with a bang—Yoon Shi-yoon, who plays a hapless timid guy, witnesses the scene of a murder. Whilst running away, he gets into a car accident with Jung In-sun, who plays a neighborhood police officer. The accident causes Yoon Shi-yoon to lose his memories, and he wakes up not knowing who he is. The only clue seems to be a diary of murder that was clenched in his grasp.

Under the delusion that he’s the owner of the diary, Yoon Shi-yoon begins to believe that he’s a psychopathic serial killer. Meanwhile, the real killer, played by Park Sung-hoon, grows increasingly nervous that the evidence of his crimes may fall into the wrong (or maybe it’s right?) hands.

It’s going to be interesting to see how Yoon Shi-yoon goes from pushover clerk at a trading firm to predatorial would-be psychopath. I’m also curious to see how that would change his interactions with Park Sung-hoon’s character who is the director of the trading firm.

Furthermore, if My Secret Terrius is any indication, Jung In-sun will make a great spunky cop. She has a great backstory too: she followed her dad’s footsteps to become a police officer, but becomes disillusioned when he falls to disgrace for a momentary mistake. From then on, she lives strictly in the realm of practicality and realism, until she meets Yoon Shi-yoon and begins to investigate this unfolding murder case.

Upcoming Tuesday-Thursday tvN drama Psychopath Diary, PD Lee Jong-jae (100 Days My Prince) and Ryu Yong-jae (Liar Game, Time Between Dog and Wolf), will begin airing in the latter half of this year.

Jung In Sun ginally in a good drama.... Can't wait

Amnesia again, but this sounds like it could be hilarious.

I always thought that Enrique would prepare Yoon Shi-yoon well for a psychopath role.

Not my precious Enrique!!!

Awwww for his sake I hope he can amnesia out his smug role as part of Next In.

What is "Next In"?
Nobody needs to know.

Uh, I'm of the belief that Enrique was his psychopath role.

I nearly choked on my water I love you egads.

I'm glad I have company.

Sorry about the choking.

True. An adolescent growing up with a deep sense of isolation becomes an overachieving adult who is also an unapologetic panda suit wearing exhibitionist....it is not difficult to draw that conclusion.

i really try to scrub that drama from my mind. thank u

Not sure about the plot, but after seeing what he could do in NOKDU FLOWER Yoon Shi Yoon has what it takes to nail a psychopath role.

I thought his evil acting part was weakest from him in Nokdu, but I was nonetheless impressed by his performance, he is very talented actor and I'm glad to see him so soon in new drama.

He didn't overreact or go the evil route. His character was changing with the brutality of war and battling with his confucianism and trying to be patriotic in what he thought was a logical way. While suffering ptsd.
And he showed that all really well.

Okay Park Sung-hoon, what you trying to tell us buddy?

Jung In-sun's involvement really has lowered my interest in this show. Drama or comedy, she is the same and neither really are good.

Damn,,this sounds amazing,if done right it will be wow!Hope they will deliver the grim and dark!

this sounds like a great premise and handled with care could be done amazingly. alsooooo YSY is a great actor, he's grown so much

Ahhhhhh, I was so excited but Jung In Sun is a no for me, I'm just not a fan, SIGH

I hope this is a dark comedy. I want a fun serial killer drama, not a serious one.

Jung In Sun has been killing it huh? After My Secret Terrius, she's been on a variety show as a host and slowly raising her profile. Terrius was disappointing for me, given that So Ji Sub was in it. Also mind blowing to me was she's been working since she was very young, and was the girl in the last scene of Memories of a Murder :O

Oh my gosh! This premise sounds.... so heart clenchingly painful to watch!!!

The only clue seems to be a diary of murder that was clenched in his grasp.

Wait...if he was in accident, a bad one since he lost his memory and he has a diary clenched in his hand..won't the cops apprehend him? I mean...he must be the first suspect right. So will YSY's character be in jail or mental institute until he recollects his memories and proven not guilty? Hahahaha

Love the writer a lot but not a fan of him making these "safe" casting choices considering he's bludgeoned me twice with surprise musical actors with his last 2 works >_>;; I wouldn't even be surprised if this occurs again, and I'm always down for his plot paths

Hey guys, guess what! After examining my brainwaves Ryu Youngjae decided to club me again with another musical actor villain by batting me out of the field like a goddamn cricket ball, you're welcome

this sounds hilarious, I love this role for yoon shi yoon

The way Park Sung-hoon is playing his character in Justice, he'll certainly have no trouble playing the criminal here.

I wish Park Sung Hoon wasn't a criminal (again). I loved him so much in Review Notebook of My Embarassing Days with Jeon So Min, and he plays a romantic lead so well I wished he would do more of that kind of role. Also, His relationship with Na Hye Mi was what made My Only Ally bearable.

But I am so down with Yoon Shi Yoon as a psychopath after Nokdu Flower because that is the only time he has an expression.

The same director with 100 DMP??? Another memory lost drama for the PD after handling the character of Kyungsoo as Woondeuk??...

I will wait for this one... Yoon Shiyoon fighting!!!