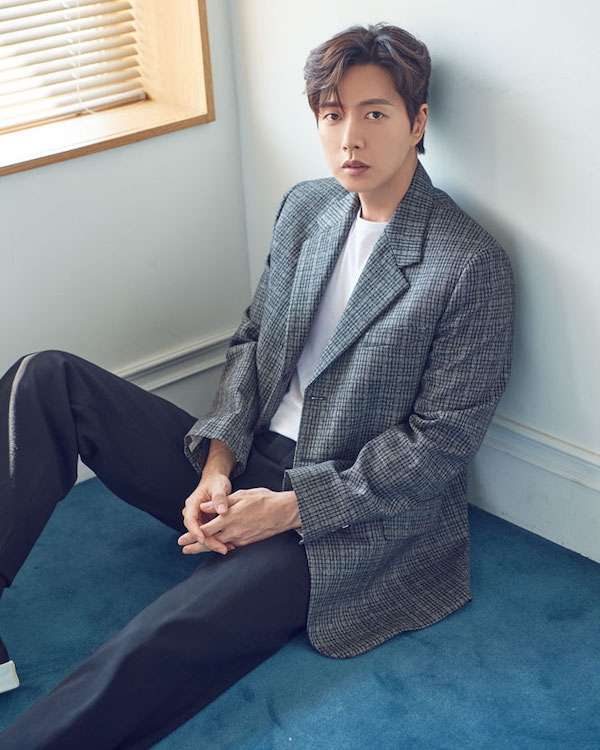 With his KBS drama Forest settled and off to a promising start, it looks like Park Hae-jin is itching for his next project. Recently, he confirmed that he will be co-starring with Kim Eung-soo (Chief of Staff 2) in MBC’s upcoming Old School Intern.

It’s a comedic-revenge office drama about what happens when a man finally gets a chance to lord over a previous boss, who made his life miserable during his rookie days with the his old school ways.

For the drama, Park Hae-jin plays a man who was immediately promoted to the highest ranks of a ramyun company after saving it from bankruptcy with his food innovation: “Hot Fried Chicken Noodles.” He rises to the position of marketing department head when his old boss, played by Kim Eung-soo, enters the company as a senior intern.

From that point on, Kim Eung-soo’s life becomes miserable, but as they go back-and-forth arguing over the best way to handle things, they learn from each other. Together, they learn how to appreciate their inter-generational differences and respect each other for their different skill sets.

MBC’s Wednesday-Thursday miniseries Old School Intern was written by Shin So-ra, who won the 2018 MBC Drama Screenwriting Competition with this script. It will be directed by Nam Sung-woo (Kill It) and begin airing in May.

Promising? Did you say Forest was off to a promising start? Sadly, I think the promos were promising, but beanies are losing enthusiasm after two strange and mediocre opening episodes.

I don't know, even that seem complementary.

I tried to watch it for PHJ but I will just stick to the recaps.

Promising ...Oppa in a bathrobe, Oppa in a towel...the promise of Oppa in full Oppa glory beckons. The rest....*shrugs*

I dropped before episode 1 ended.
And I’ve watched Melting me softly to the end.
So far for promising.

This was also me.

Those who finished melty should all get a medal 🏅

We really deserve it 💪🏻

You do. You really do.

Omg you deserve an award. How did you make it through last two episodes? I tried so hard to hang on but in the end I also gave up. It's a good thing that even a quarter of its total run is enough to validate my opinion of worst drama ever.

FF Button was my best friend.

This actually would be a premise I’d watch.

But I wouldn't trust that May release date.

You broke Oppa's heart. And mine.

@yyishere,
Can we look forward to another of your cameos in OLD SCHOOL INTERN? You blew me away as the strange wind in CRASH LANDING ON YOU. ;-)

Aside from being a ramyun fangirl, I also love Kim Eung-soo. He's one of my very favorite senior actors. I can just imagine him as a crotchety old geezer ruling the office with an imperious iron hand and running roughshod over a hapless rookie.

Maybe we'll even get an exciting nightmare action sequence courtesy of the KILL IT director as a competitor attempts to swipe the secret recipe for "Hot Fried Chicken Noodles" -- which are sure to become a big seller at PEGASUS MARKET. They sound delicious. Makes me wonder about PPL. It would be hilarious if this show ties in with a new product launch.

I'm crossing my fingers that we get a cameo by Dark Death himself, just to keep things interesting. In which case it becomes RAMYUN TO RAMYUN.
Or RAMYUN OVER GRANDPA?! ;-)

@katakwasabi @msrabbit @azzo1 The romance will be with the chicken, of course. Oppa co-habitates with a chicken on a farm. He starts to develop feelings for the bird. (Is a chicken a bird?) His hand shakes every time he goes to the chicken coop with his chopper. He realises he can't kill it. Can't make chicken noodles out of it.

Chicken is a bird. Possitive.
This plot sound really good.
I would be in for the chicken.

So he uses his genius brain to develop fake chicken meat out of wood. And it turns out, he's right in not killing the chicken. It turns out to be a long lost beloved pet of a conglomerate. He gave Oppa tons of money to buy that Forest land where he lives happily ever after with the chicken.

Oppa made that Hot Fried Chicken Noodles with his Fiery Hands!

Oppa wouldn't even need a wok! He can stir fry chicken noodles with his fire hands!

This fiery hand joke is going to replace Park Who Jin, isn't it? Poor Oppa.

I really hope it does.. the Who Jin joke hurts me a little 😂💔

The PD of Kill It, a new writer and the luck of Par Hae Jin?

Hey Kill It was at least fun... lol

Fun in the way of Arthdal Chronicles or Melting Me Softly...

You do it a disservice; it wasn't nearly as bad as those.

No no no. Those were disappointing & boring from the beginning. Kill it was FUN.
Nothing is as bad as Thrashy, not even Trashdal.

I don't think Arthdal Chronicles was boring from the beginning. It had a lot of potential and at least tried to do something new. I couldn't pass the first 2 episodes of Kill It.

Yup. I liked Kill It. It was such good trash that it became campy. It also made me emotional at various points. It had potential to be genuinely good before ep 6.

The major problem of kill it was the writing , the directing was really good I believe , came a works , editing and the music was great.

I like the story and will watch out for it because of Park Hae Jin. It got me with the intergenerational thing and expect it to be heartwarming.

This better be a crack show.

I'm sorry for Park Hae-jin, but every time I see his involvement in a drama it kinda turns me off. He has had such bad luck picking them, that I always trust his taste towards the bad

I liked Man to Man. It was a silly first ep, but his relationship with Park Sung Woong was so cute. Reasonable plot progression. My husband even liked it. I think the whole "oppa" thing was weird for him tho.

Oppa, you had me at chicken.

This actually sounds kind of fun.. I'll be watching it anyway, so!

You said that, too, about Forest...

I've already watched the first two episodes, when I said I was hitting Play yesterday, I meant it.. I will post my Oppa-gifs later today if I have time!

So excited. Are you going to post on the weecap? I know Oppa is waiting. Poor Oppa.

Don’t forget to shit post. I’ll be awaiting the gifs.

I'm not good at sh*tposting, but GIFs, that I'm good at!

Did you say the director of Kill it? Ha ha ha ha. Well KILL IT's direction wasn't bad so I guess there's hope for this.

Any feedback on his on going drama Forest? Is it any good?

By they way, just wondering Dramabeans didn’t comment about Moon Chae Won and Lee Joon Gi new drama. That was actually real news as out of the blue news for their confirmed drama casting with no pre-release ‘offer’ or ‘considering’ kind of publicity.

Maybe DB only report anything when they are paid. The LJG and MCW drama probably doesn’t need any publicity anymore.

I love it when rookie writers gets their script turn into reality via competitions! Will watch out for this.

I tried watching Forest, I loved the premise and the teasers, I couldn’t hold on after Ep.4, not even for Park Hae-Jin (I even liked him in Cheese in the trap). There’s just no chemistry between him and Jo Bo-Ah...and she’s never impressed with her acting.

At least this premise sounds interesting!

I couldn't stop crying when I did my lines in "HER NAME WAS MARY" written and produced by Liz Vice, FOUNDER OF " FISHGATE PRODUCTIONS." LIZ VICE IS NATURAL ALLOWING YOU TO FEEL THE SOUL, OF YOUR CHARACTER. I STILL GET TEARY JUST REMEMBERING.