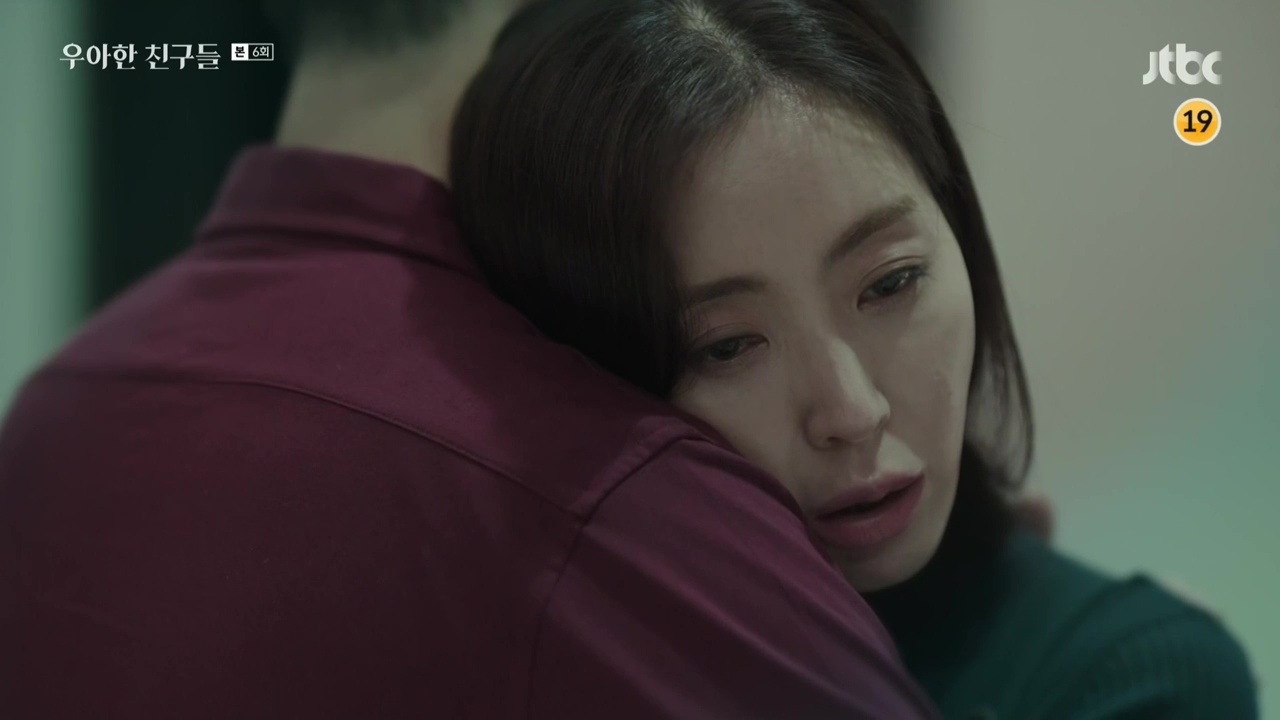 The wow factor is through the roof this week as Graceful Friends pulls the rug out from under us. Our murder has been committed, but things are definitely not what they seem. How much can we trust what we’re seeing? How much can we trust what our characters are saying? The drama undermines the things we’ve taken as facts, using a sleight of hand that’s literally dropped my jaw. 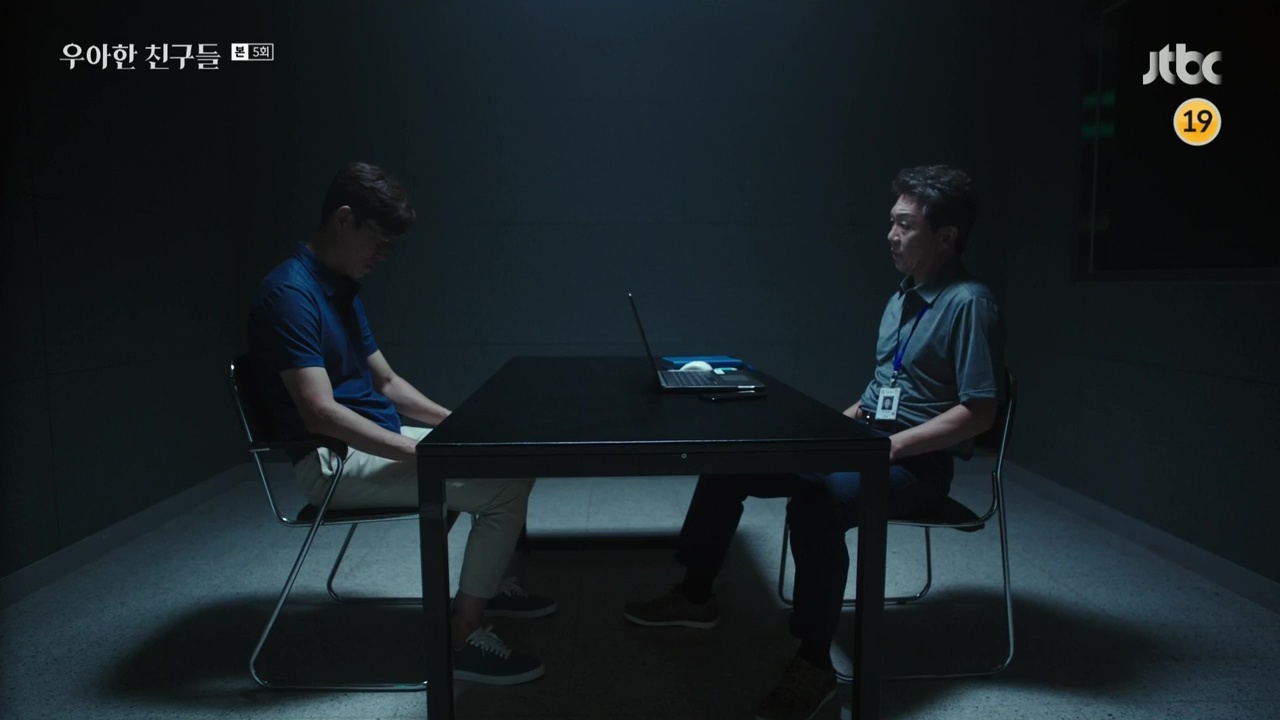 We open right where we left off last week: the aftermath of our friends at the crime scene of Kang-san’s gory death. Jae-hoon smartly calls the police straight away, while everyone else is in shock. We’ve seen this scene already, so we can believe what we’re seeing, right? Actually, I’m not so sure anymore. While he’s dropped to the ground in shock, Goong-chul notices Jung-hae’s necklace on the floor — and this is the first of many cracks in the story we thought we knew.

Once the police start investigating, more cracks start appearing: there are no fingerprints in the apartment at all, the CCTV has been out for four days, and even more shocking, Kang-san’s autopsy shows that cause of death was a strikes to his skull that happened before his fight/fall with Goong-chul. What the heck!? 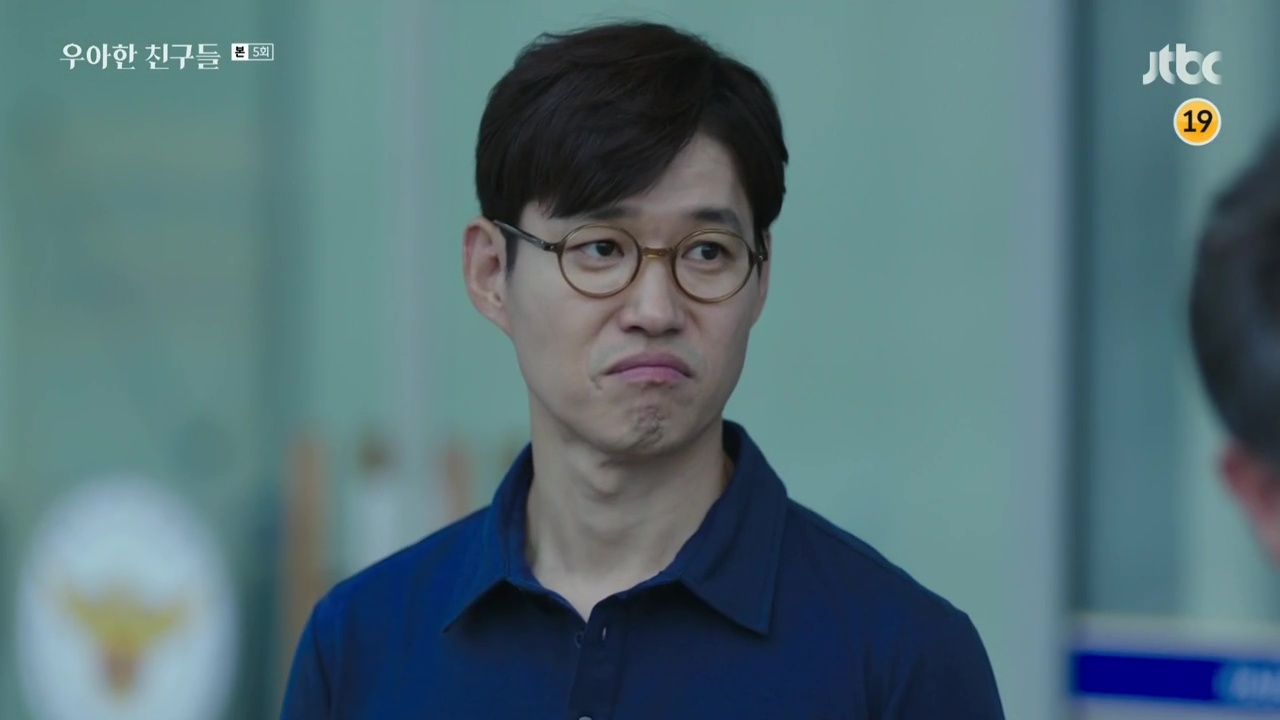 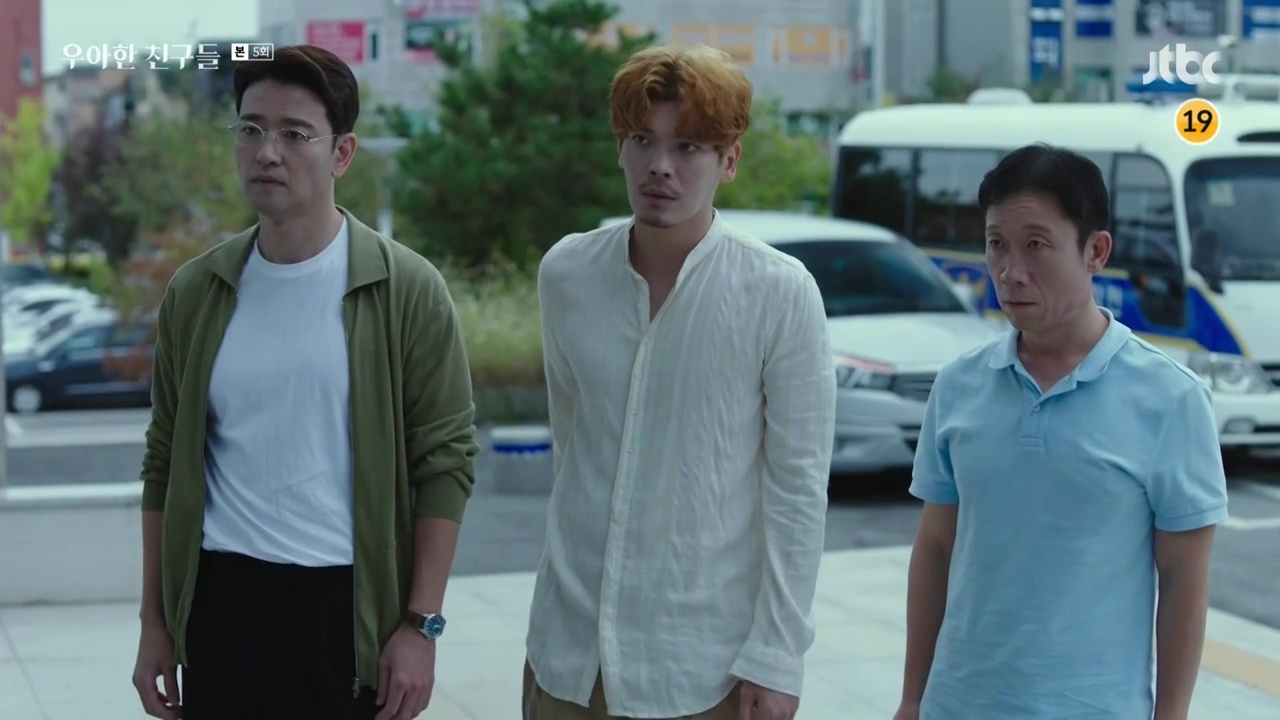 Goong-chul and his friends are questioned, and everyone remains tight-lipped — that is, until Goong-chul cracks and suddenly admits the truth: he went there in anger “because that guy did something horrible to my wife,” punched Kang-san in a fury, and he hit his head and died. But is this really the truth? I don’t know anymore than the police do. And our friends seem to know less than that. They are as loyal as ever to Goong-chul (we even get flashbacks of the incident 20 years ago to prove it), but there’s something disturbing about the whole situation. I no longer trust anyone.

Jung-hae is next at the police station — she turns herself in because she was at Kang-san’s apartment earlier that night and wants to come clean (or so she says). We get a playback of how the scene went: Kang-san is assaulting her and she’s struggling for her life, reaches for the first thing she can grab, and smashes him on the head with it before running away. Okay, this makes sense… but if Kang-san had such a fatal injury from their fight, how is he showering later when Goong-chul finds him? Beyond that, the police can’t find Kang-san’s cellphone(s), nor a trace of the trophy that Jung-hae used to defend herself. What is happeninggggg! 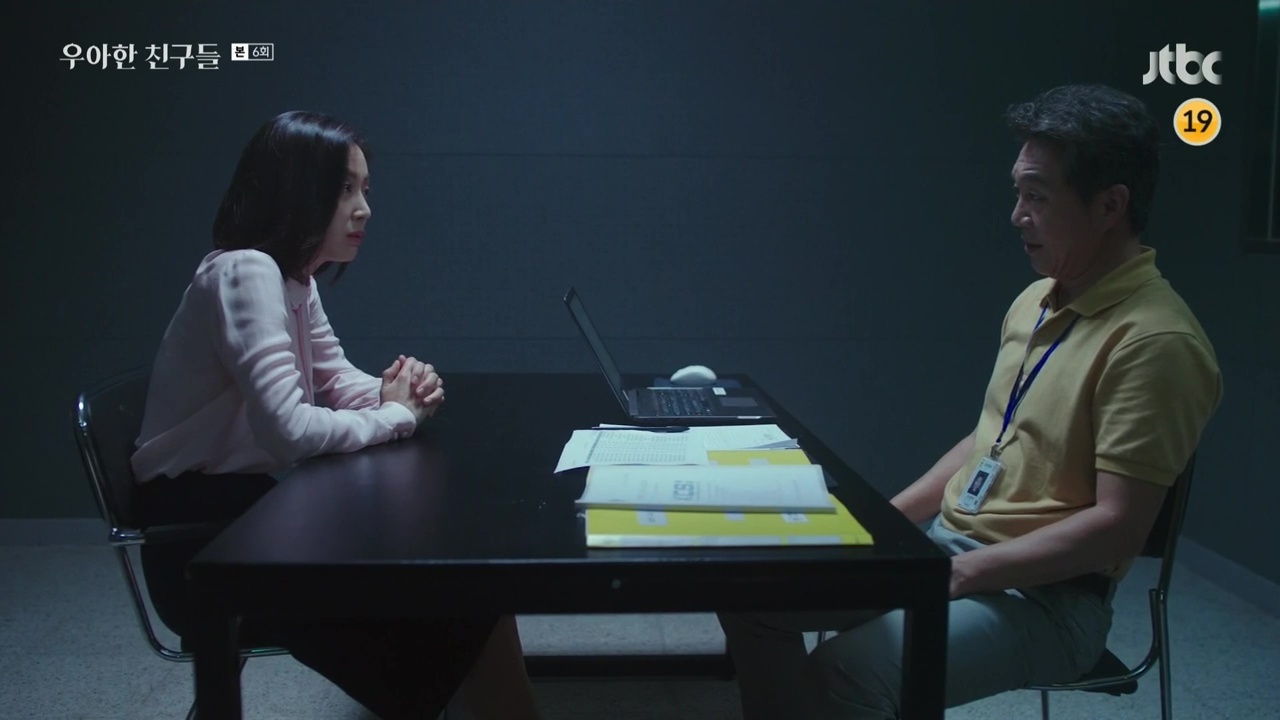 We’ve got two stories, equally believable, but both conflicting with each other. Who is lying, and why? But wait, there is yet another layer! Goong-chul receives a random video on his phone, and it’s the very scene that Jung-hae endured the night of Kang-san’s death. We see him assaulting her as described — except there’s no head injury. She merely bites his hand viciously and then flees the scene. All the while someone is filming this! OMG.

I don’t think there are enough exclamation points or italics to get across the total cleverness of this drama’s tricks. It’s the best kind of storytelling trick because we believe what we see — until we see something else, and are left with all these contradicting situations and so. much. suspicion. 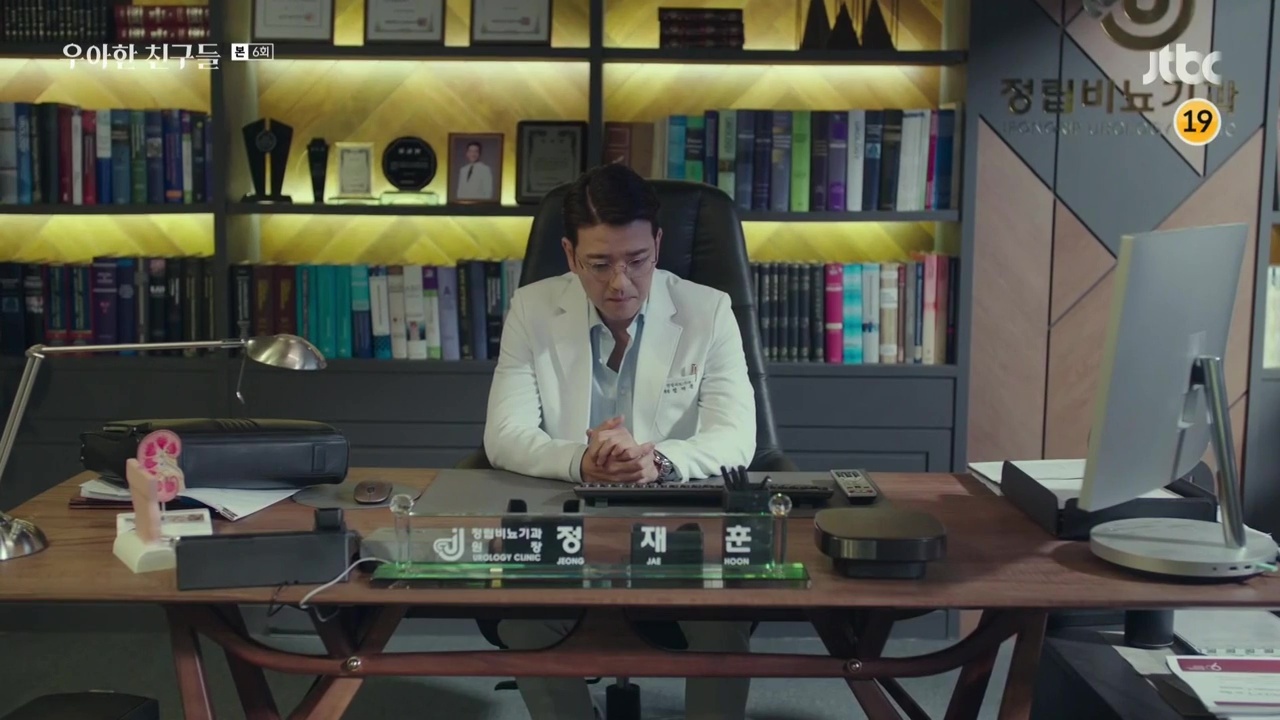 Front of the line for me right now is Jae-hoon. We’ve seen first-hand his fastidious ways, his possibly repressed feelings for Jung-hae, and at the end of this week’s episodes, we know he’s up to something. Not only is he in the market for the “best attorney” in town, but he’s nosing around the police station watching Jung-hae and Goong-chul. He’s also the mysterious “benefactor” character that Jung-hae has been practicing golf for… which makes me incredibly uneasy, since that very golf plot line was why Jung-hae started interacting with Kang-san.

For all our suspicions, we’re still left with the question: who is the murderer that left behind a perfect crime scene? We end this week’s episodes fourteen days after Kang-san’s murder, with no other clues in sight yet.

However, the story continues to deepen when Hae-sook returns as the new owner of our friends’ favorite neighborhood bar. I don’t get anything but bad vibes off of this woman, and I’m convinced she’s involved somehow. We shall see. 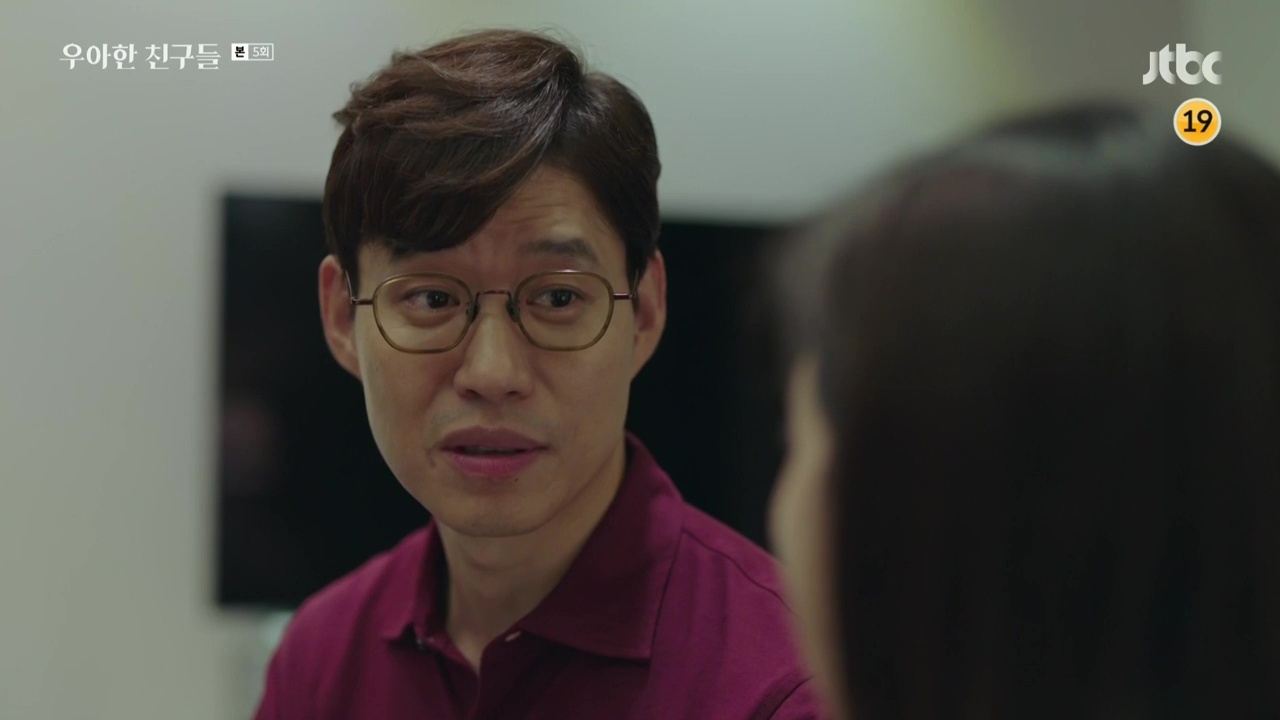 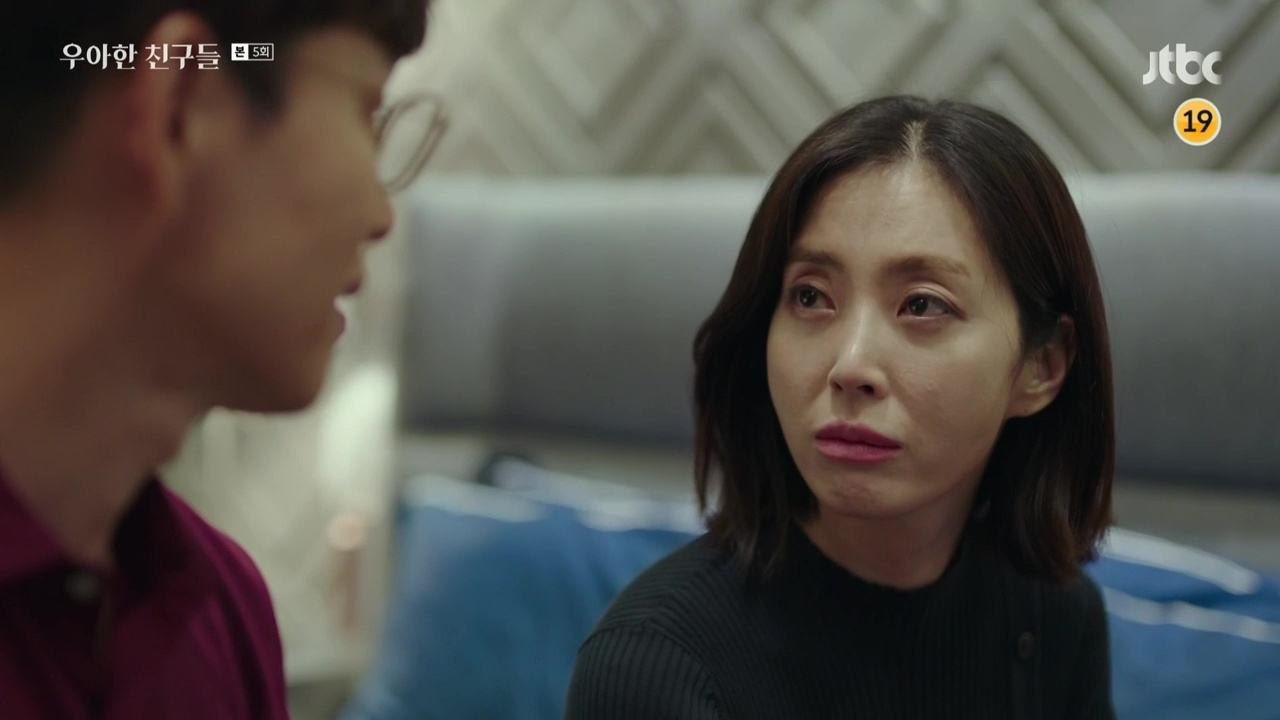 While the twists and intrigue and unreliable storytelling take up most of the plot, Graceful Friends is also an incredibly well-rounded drama. The heightened and dramatic moments are balanced with deep, intimate ones, and we get some great insight on how our friends’ relationships work, the dynamics of Jung-hae and Goong-chul’s marriage, and even a touching hike in honor of Man-shik’s birthday.

I continue to be impressed with how this drama can be hilarious, touching, and make my brain explode all at the same time, and yet still feel even-keeled. I love a drama that takes me on a ride, and when it’s a ride as good as this one, I don’t mind being tricked along the way, as long as the payoff is worth it in the end. And if our first six episodes are any indication, we’re heading for some more explosive reveals as the plot continues. 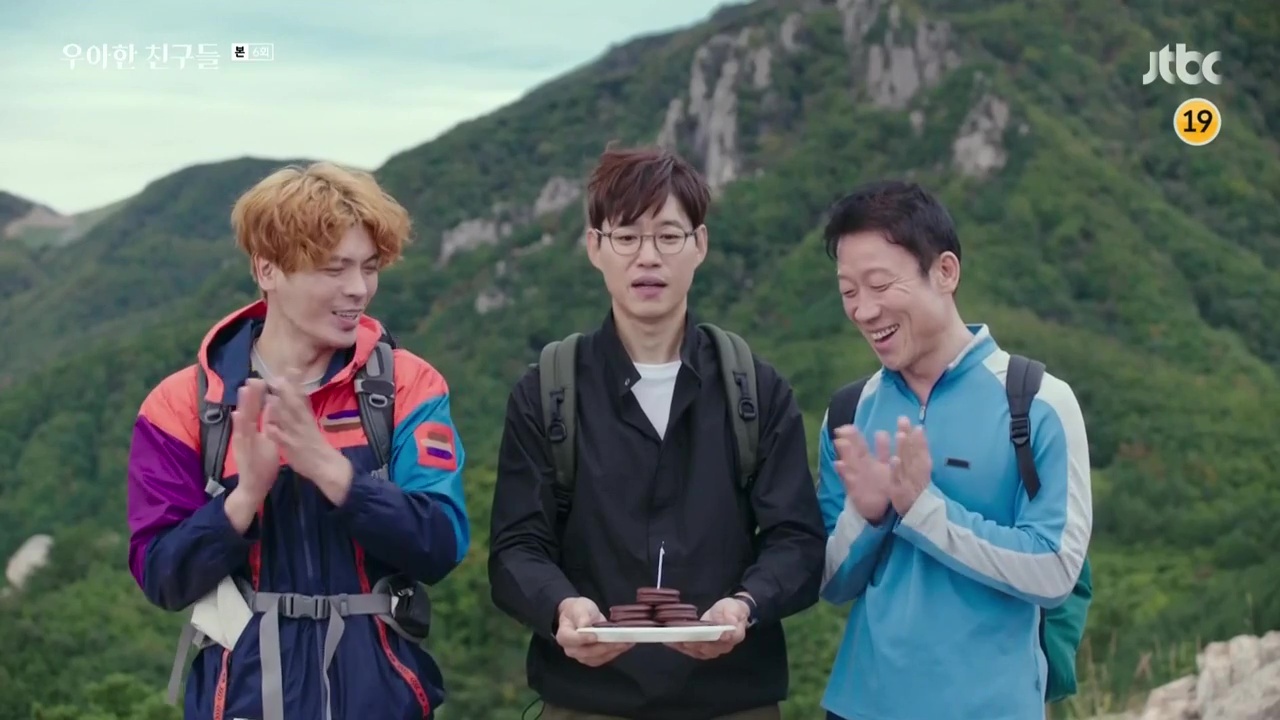 Man-shik's daughter broke my heart. I teared up when Hyung-woo said, "Our Soo-ah's all grown up." I appreciate Jae-hoon's offer to help her continue studying. "These three may not be competent enough to do that but I am."

I've been on the fence with this drama, but I liked this week's episodes more than the first four.

Jae-hoon seems the most likely candidate to be involved, but isn't that a little too predictable? The other two guys are too dumb to be involved.

Man Shik and that old lady and young woman have to fit into the story somehow, but I'm clueless about their roles.

@missh I agree Jae-hoon seems too easy a culprit, but GULP!!!!

I would be so disappointed if its Jae-hoon, that would just completely destroy the friendship, which is such a beautiful thing. I found myself keep looking for the scenes with his hands to find more clues. the acting is great in this! cant wait for more episodes

Hah, I was also being a hand detective.... No luck yet!

I recall saying that Jae-hoon was bad news the minute he appeared onscreen for the first time, back in that first episode. There's just something unsettling about him ..... but as other Beanies have mentioned, that is almost too obvious. Who knows! But there's no doubt he's up to something given that he's following Goong-chul and Jung-hae. And just what exactly is he going to do with those compromising photos of the director friend??

Wow...I wish it was the wife that killed him...I would love to hate her...because right now I am in extreme dislike of how she has pretty well handled everything from her cover-up with her husband after getting the photos, to the anger she feels at him now for even worrying that people might think she killed him.