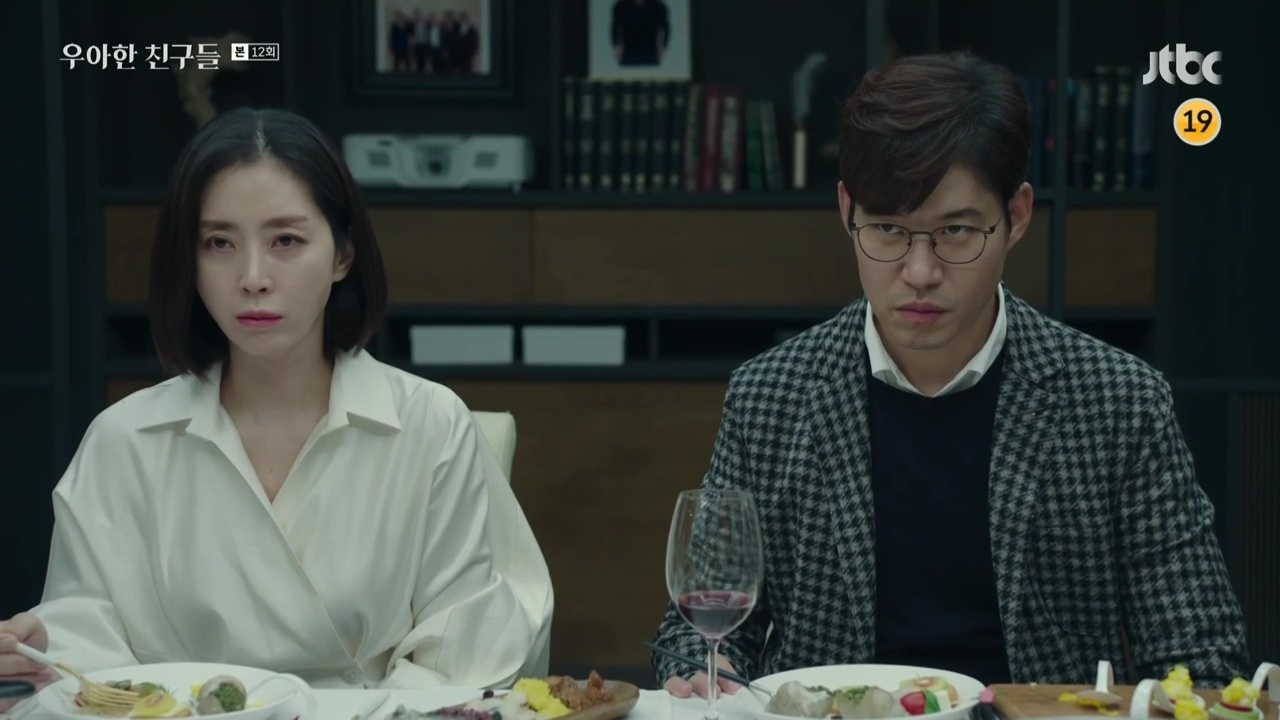 If last week was for pathos and understanding our characters, this week is huge nail-biting reveals and confrontations that give automatic goosebumps. Between new evidence in the hands of the police, and a lot of pot-stirring amongst our friends, this week is a big turning point in the drama — and in the lives of our characters. 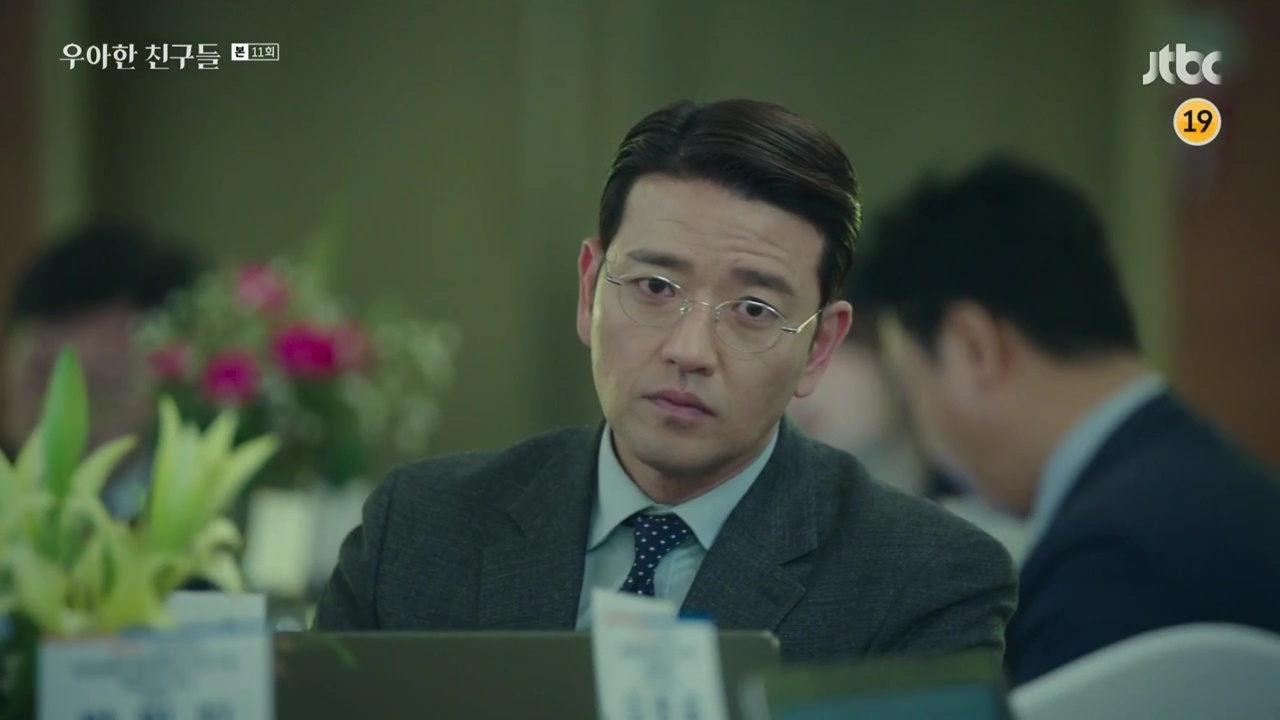 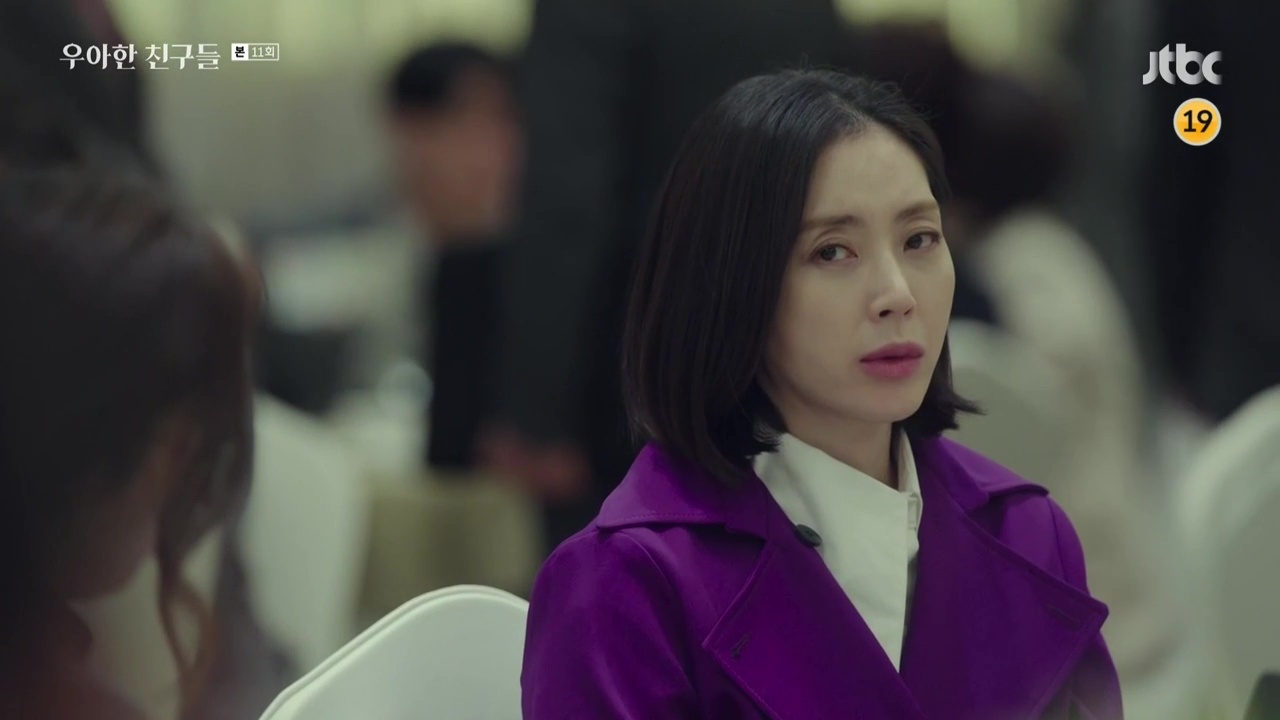 Last week we learned about Jae-hoon and Jung-hae’s past engagement, and his continued agonizing over her. This week, with the ground laid, we get a much clearer picture of Jae-hoon. It’s as if the drama is now willing to show us what was lurking around the corner that we didn’t previously catch on to.

First, for context, we see the shock when (in the past) Goong-chul announces to his pals that he’s getting married… and that they’ll remember his finance from college. Jae-hoon holds it together, but by a hair. I feel so bad for him! I don’t know what it is about Bae Soo-bin’s performance in this role. I know Jae-hoon is kind of a terrible man, but I can’t help but follow him around and feel his feelings. 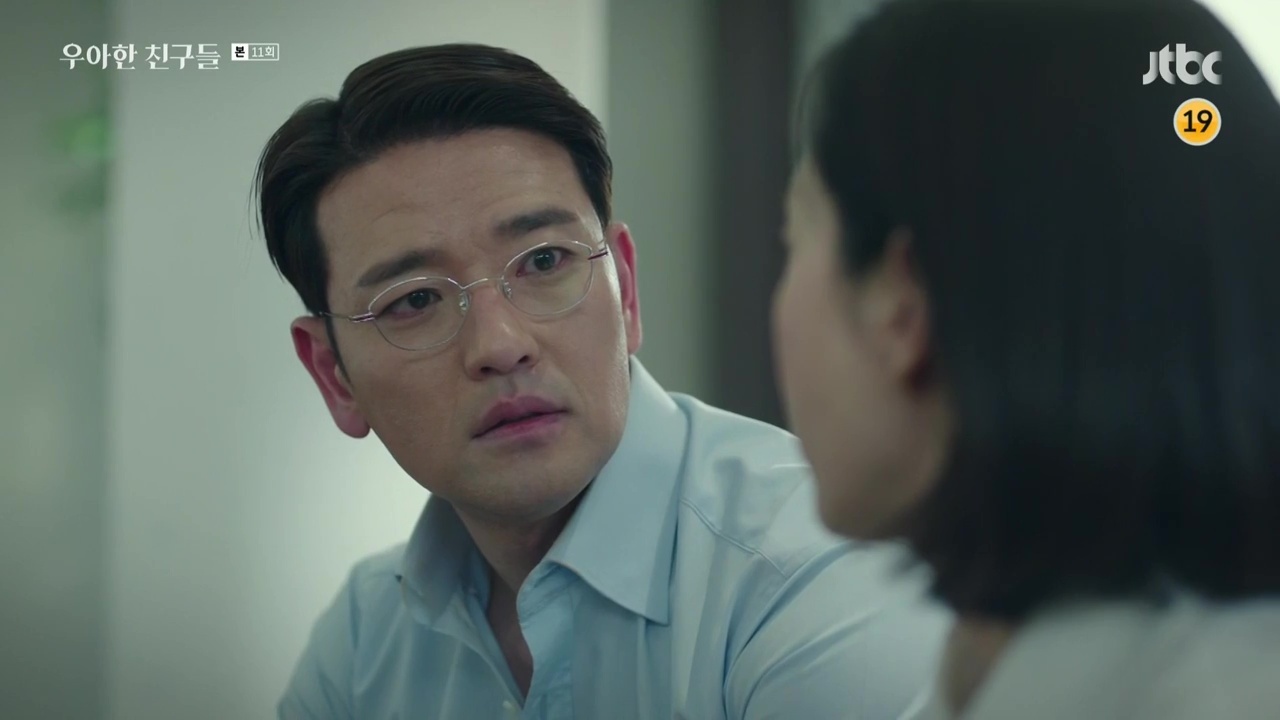 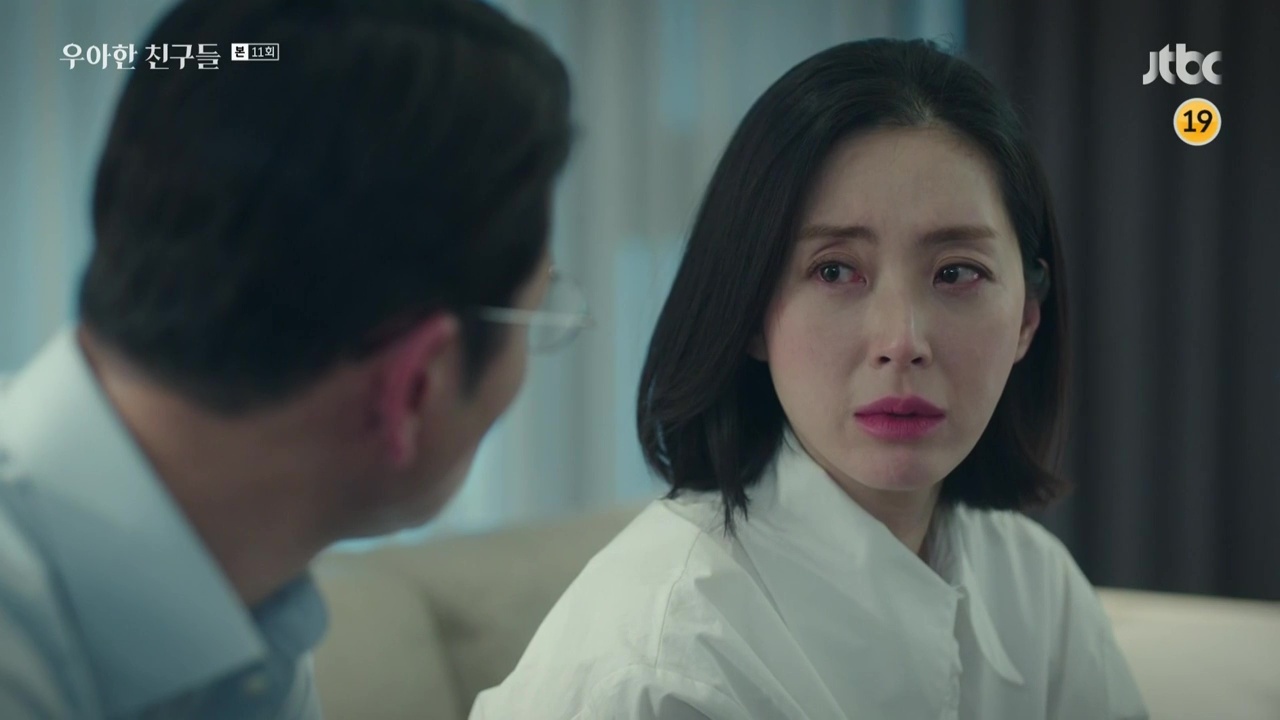 Those feelings are wide in the open, now. When Jung-hae and Jae-hoon attend the same work conference, Jae-hoon no longer tries to mask the charged looks he sends her way. After hours, he turns up at her hotel room with a bottle of wine, and ardent (yet super troubling) confessions of love. Jung-hae’s horrified and escapes his desperate lunge for her… but there’s something so sad and raw about this whole turn of events.

Is it seeing Jae-hoon’s desperation? Is it the fact that we understand his heartbreak and emotions but at the same time can’t condone his behavior? Is it because it still feels like there’s something between them? Or is it Jung-hae’s coldness to him and faithfulness to her marriage that makes this scene so compelling? It could be everything. All I know is, it’s complex and amazing to watch play out on the screen. 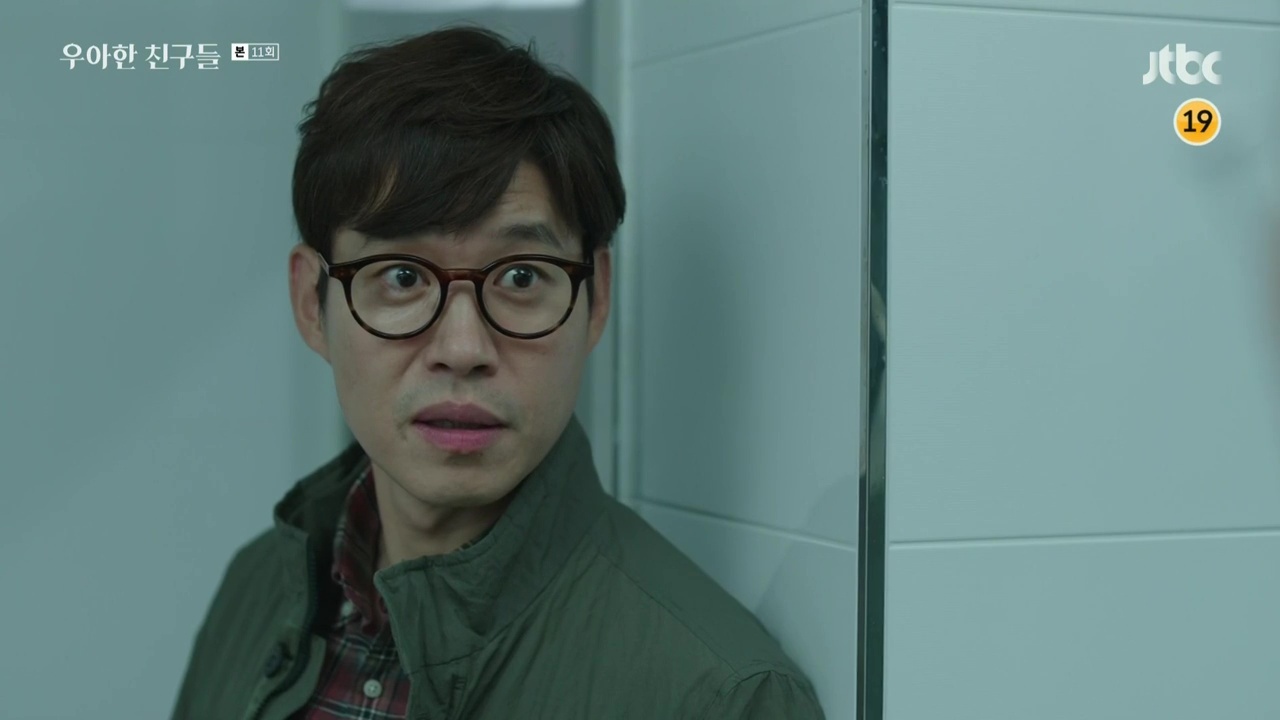 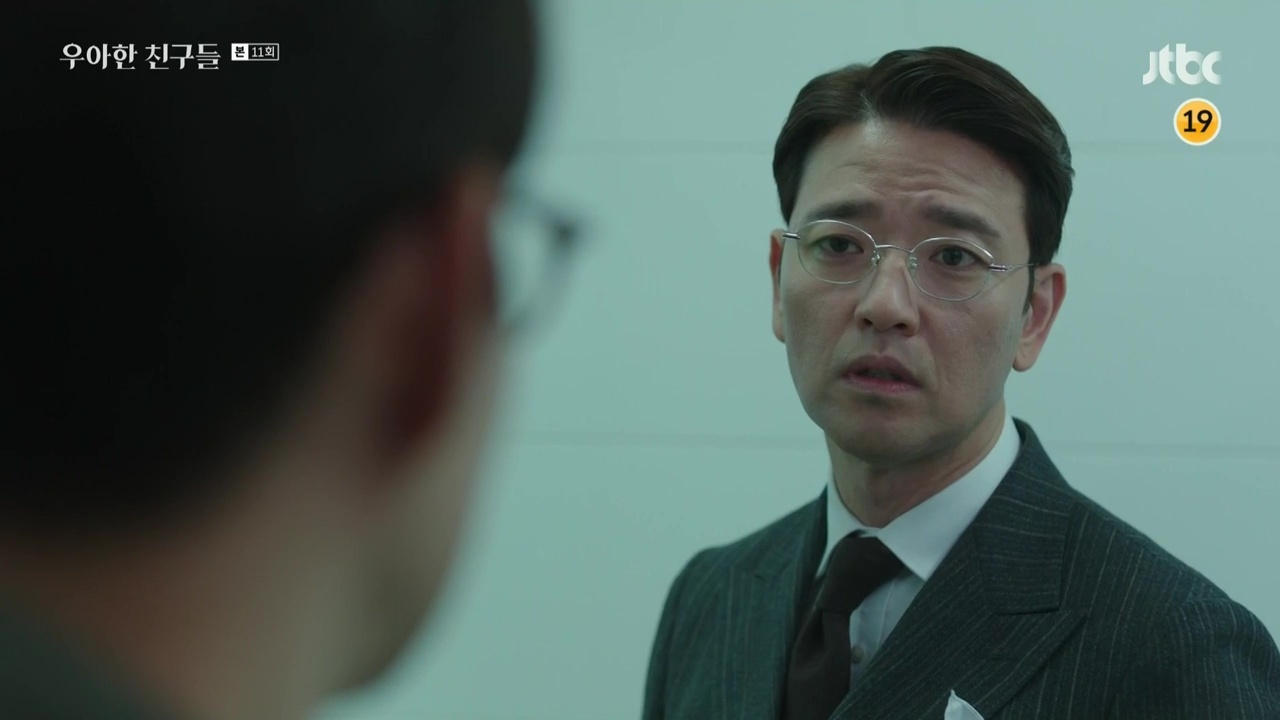 Even though we have seen Jung-hae rebuke Jae-hoon’s advances (in the past and present), Goong-chul is quite the bloodhound for possible infidelity. What makes his suspicions even more scary is that we’ve seen how crazy he can get — we got a first row seat at his rage as the story with Kang-san played out. I love that his character both has this boyish innocence that makes us trust him, and also this dangerous edge to him at the same time. We don’t know what he’s capable of when he reaches the breaking point; or, the hints have been enough.

But we can’t really blame Goong-chul for his suspicions. Not only is his marriage with Jung-hae completely lacking in any kind of communication (seriously, how have they survived all these years?), but he is slowly piecing the clues together. The mysterious golf benefactor. The way Jae-hoon jumped to protect the tripping Jung-hae. The way he seems to know about her past that Goong-chul never asked about.

The craziest part of his suspicions is that while he’s actually pretty accurate, it doesn’t occur to him that it’s completely one-sided. He’s so quick to doubt his wife, he doesn’t consider the possibility of his friend being obsessed with her for umteenth years. What’s touching, though, is that even though there are struggles in their marriage, we see them both remain faithful to each other this week — Jung-hae refusing Jae-hoon’s advances, and Goong-chul extricating himself from Hae-sook’s grasp before he reaches the point of no return. 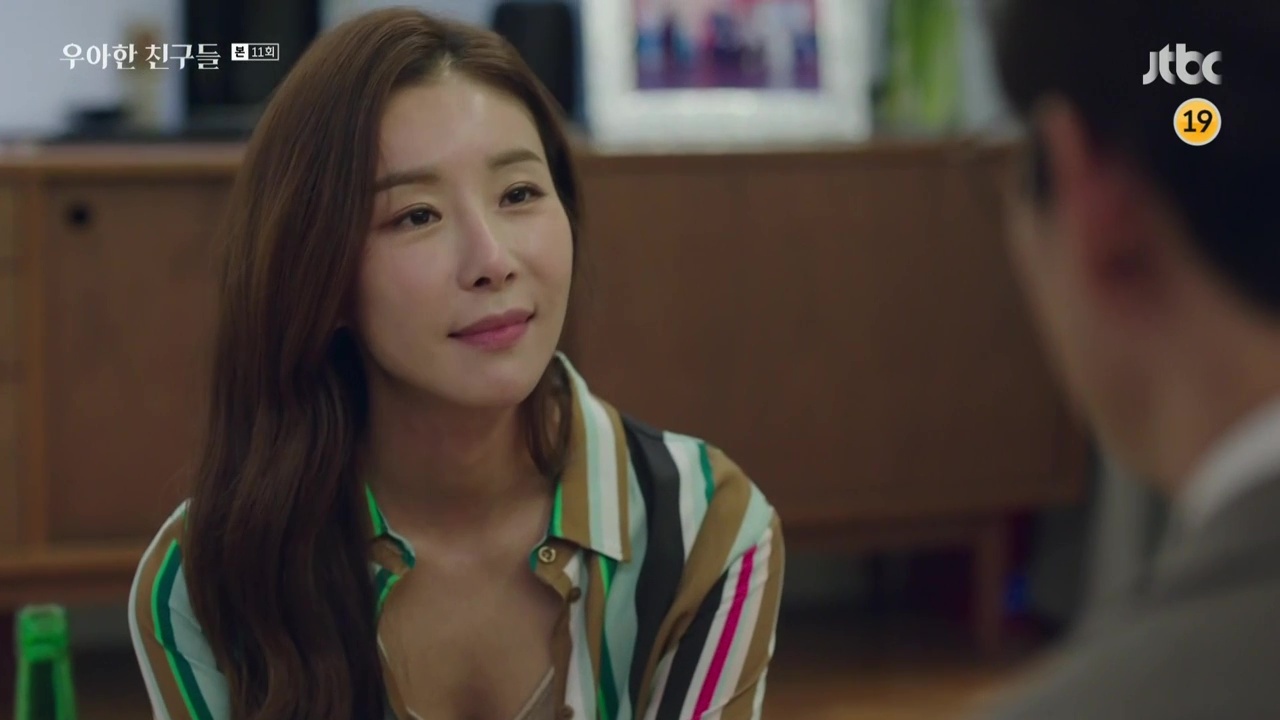 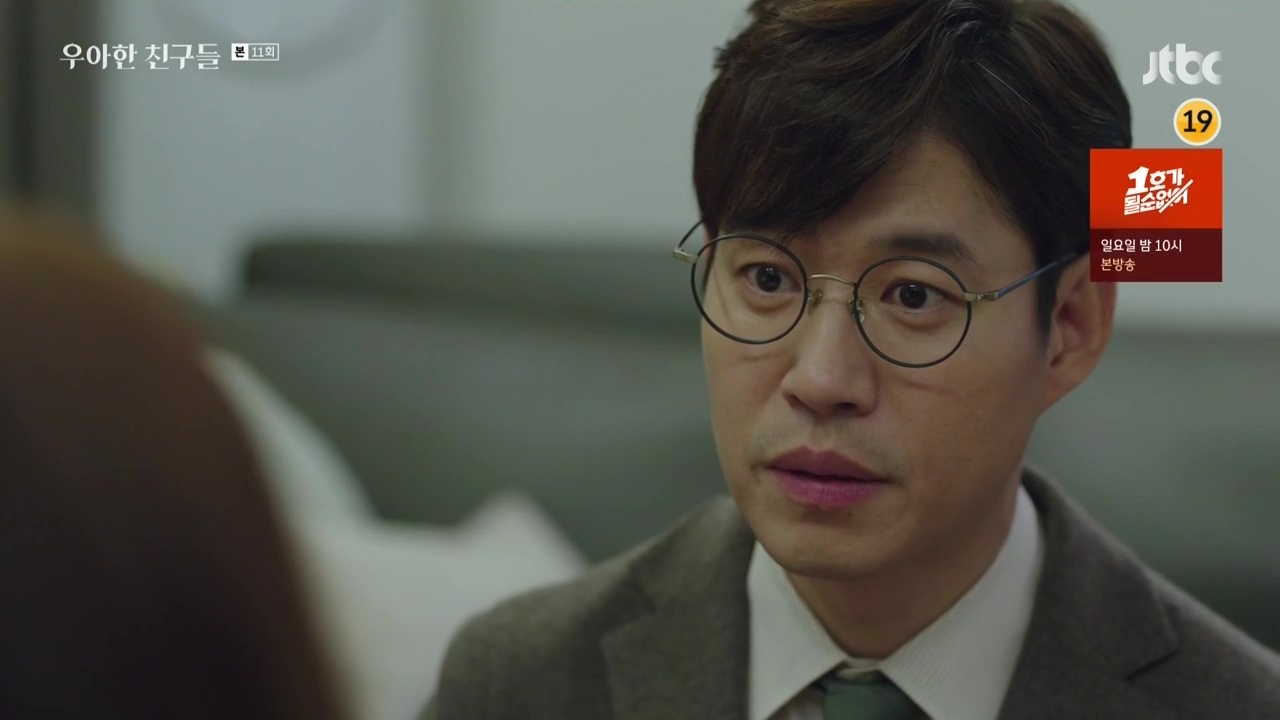 Graceful Friends has this way of handling its drama and reveals — it’s not that they’re always subtle, but they’re delivered with so much subtle tension that it makes for an incredible watch. How do they keep it going, week after week? I think the answer hit me this week during the insane dinner party our friends had: it’s the tension and conflict on the surface combined with the intense subtext that flies high in each scene. It’s almost as if there are two planes in the storytelling at all times, and it heightens the experience.

For instance, during the dinner party, we have everyone acting like normal, chatting, and being friendly — even Hae-sook and CHOI MO-RAN (Lee Yeon-doo), Jae-hoon’s ex-wife. Both of these women are masters at manipulation. Mo-ran starts it out talking about her divorce from Jae-hoon two years ago. 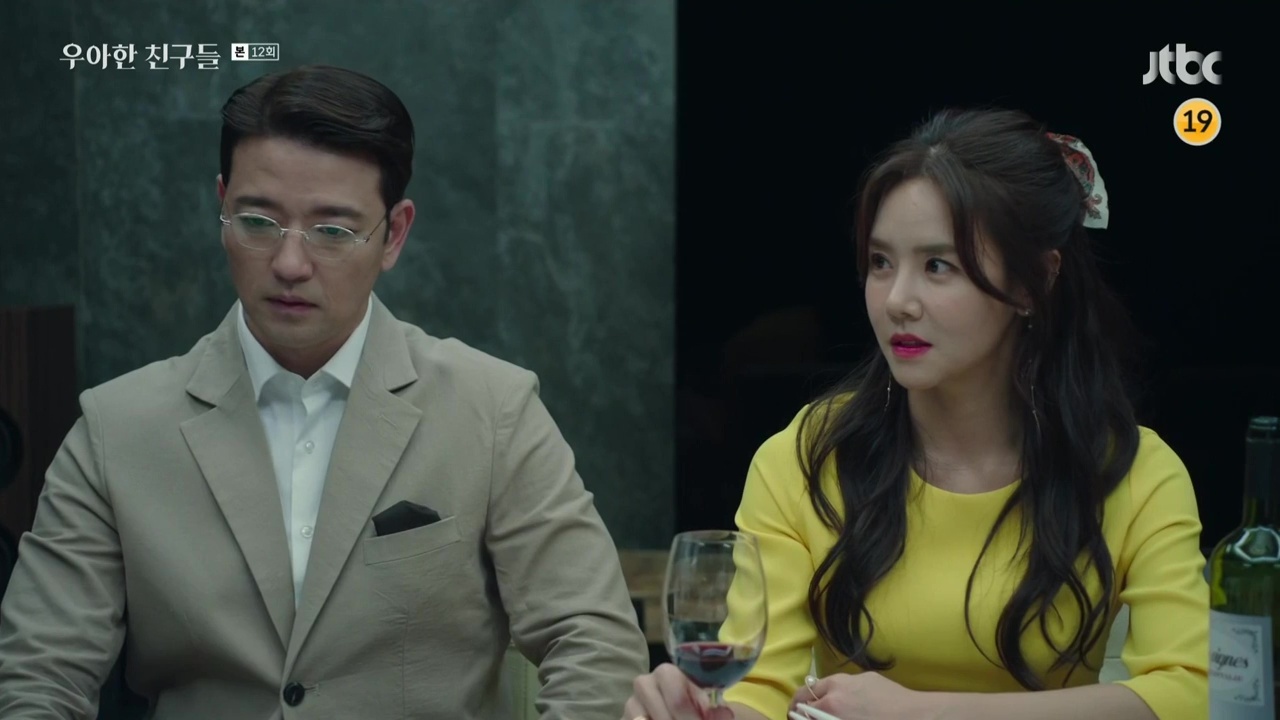 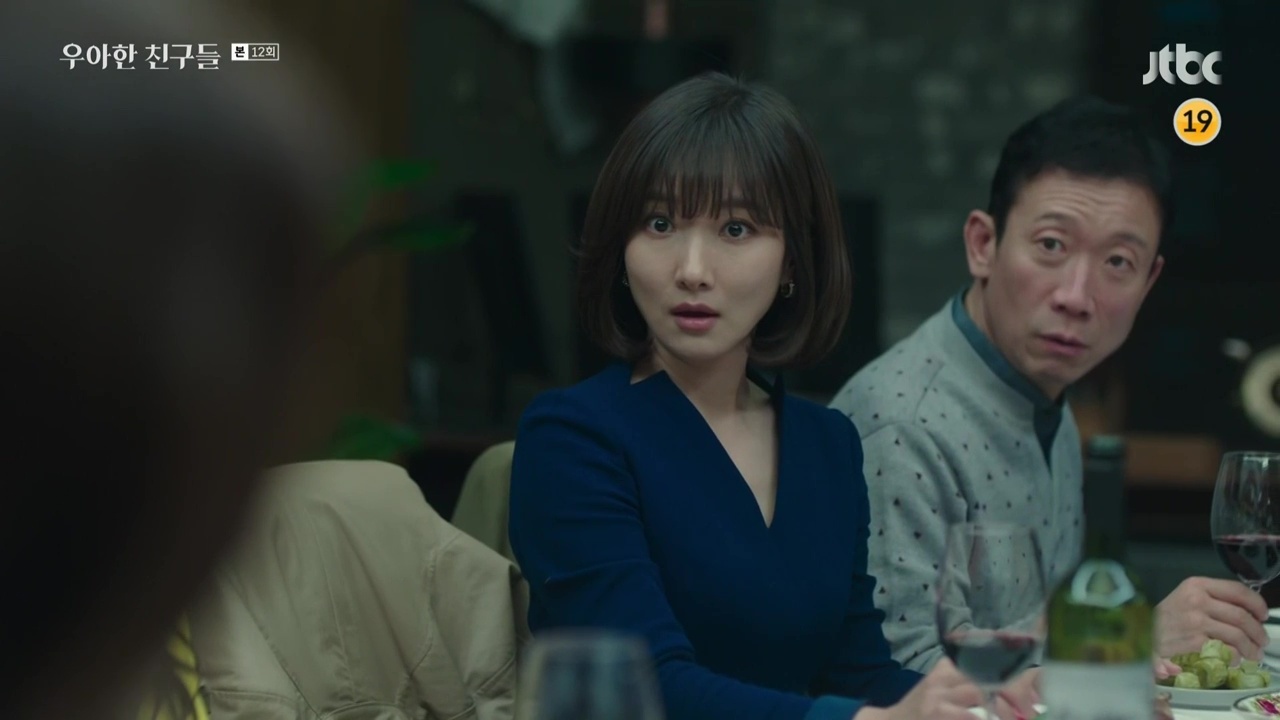 We were led to believe Jae-hoon abandoned her after she put on weight, but this week we learn that it was Mo-ran who filed for the divorce. With an innocent face that is actually Not That Innocent, she says the reason was that Jae-hoon said someone else’s name when he was having sex with her. She even hints that that person could be sitting at the table right now.

You could cut the air with a knife! Mo-ran plays it off like a joke, but she knows very well what she’s doing. Jae-hoon looks like he’s about to pass out, Jung-hae look nauseated, Goong-chul is suspicious, Hae-sook is smug as hell, and Kyung-ja (arguably the wisest amongst these friends) tries to break the tension and change the subject. Then, Chun-bok’s wife asks a silly question and suddenly Jae-hoon spit-takes his mouthful of wine all over Jung-hae. It’s the final mortification for her and she retreats to the bathroom… only to come out wearing the shirt that Jae-hoon rushed to lend her. Gosh, the scene is just loaded with subtext and tension; it’s definitely one of the best scenes in the drama, with its intense push and pull of hints, interjections of humor, metaphor, and flat-out drama. 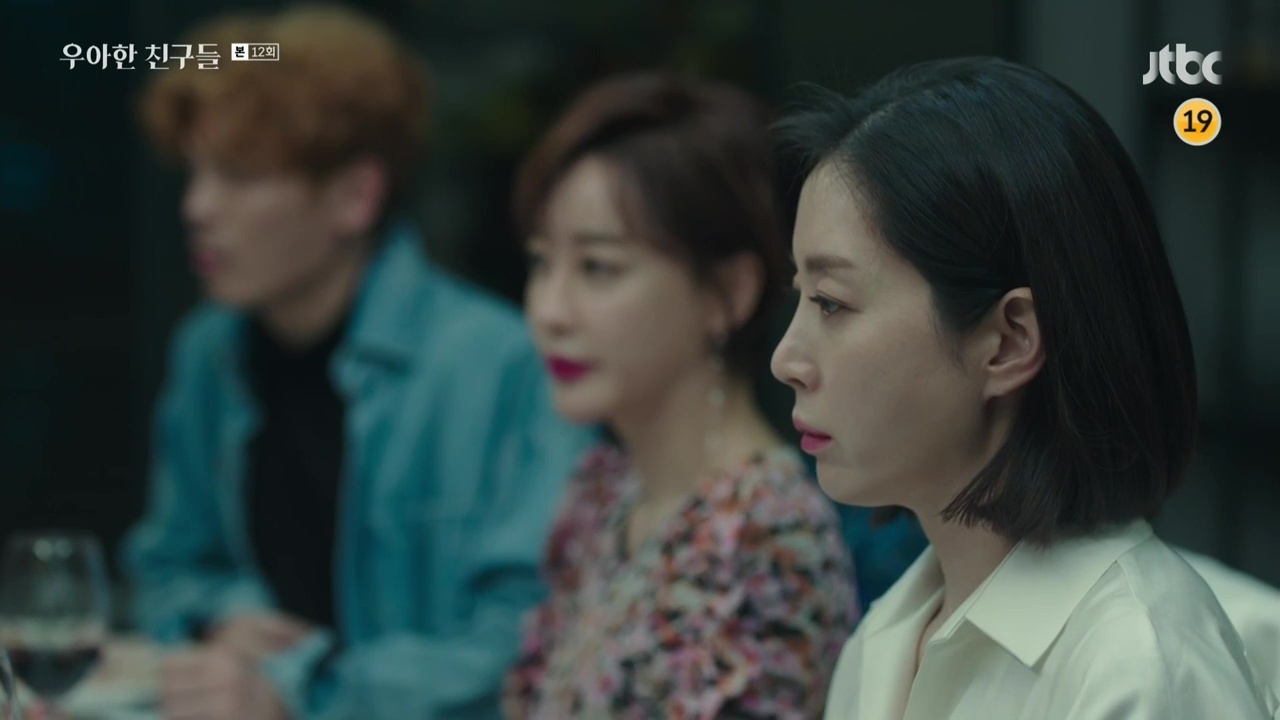 We end this week’s episodes with a return to the murder that opened it — except this time, we’re seeing it from yet another perspective. We’ve had Goong-chul’s version of the story, along with Jung-hae and Hyung-woo, but now we get Jae-hoon’s — and it’s just a constant barrage of nail-biting reveals. The police get their hands on an incriminating recording, thanks to Kang-san’s escort friend, and it proves what I’ve been hoping was not going to be true, even though everything has been pointing to it for a few weeks now: it was Jae-hoon that hired Kang-san.

We see flashbacks of their deal making, and interestingly, Jae-hoon is very specific about what he wants Kang-san to do, as well as his intention: to break up Jung-hae and Goong-chul’s marriage. Obviously, all of Jae-hoon’s strict rules are completely ignored by the insane menace that is/was Kang-san. We know where the story goes from here, but it’s interesting to see it from a new starting point, and see how differently it colors the way things play out. 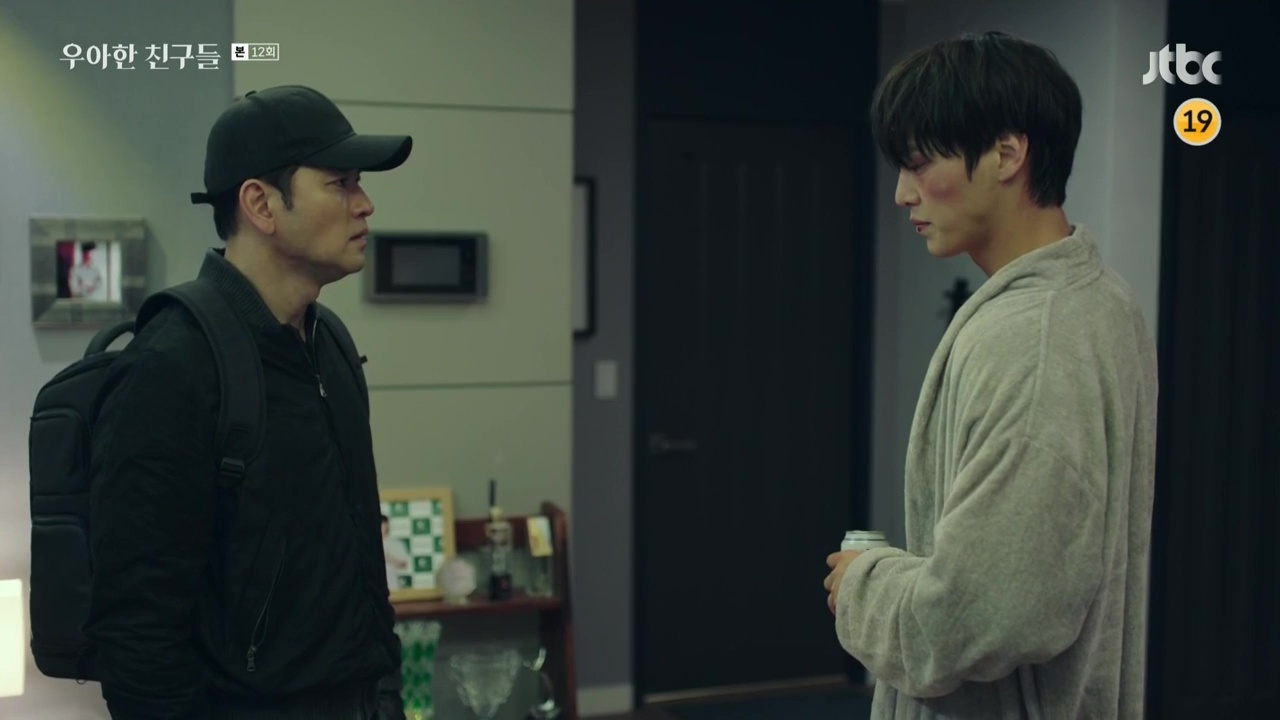 We follow Jae-hoon as he’s trying to abort the plan gone awry by sneaking into Kang-san’s apartment on the night of his murder and witnessing the parade of people that go in and out that night. Even though everything points to Jae-hoon being the murderer, he denies it. His horrible attorney brother is defending him, so goodness knows what will happen in that interrogation room next week.

And while we’re on the topic of “rooms,” there’s more to Jae-hoon’s not-so-secret secret room than meets the eye. At the end of our episode, Goong-chul remembers Jae-hoon’s joke that there’s a secret room within his “obvious” secret room, and Goong-chul scours the room to find it. Just as he’s pulling open a secret panel, the episode ends. What! It’s the worst (meaning best) cliffhanger in recent drama history. Between that, all the existing tension, and Jae-hoon’s crazy smile to Goong-chul when he’s arrested, I can only imagine what else lies ahead in our final weeks. 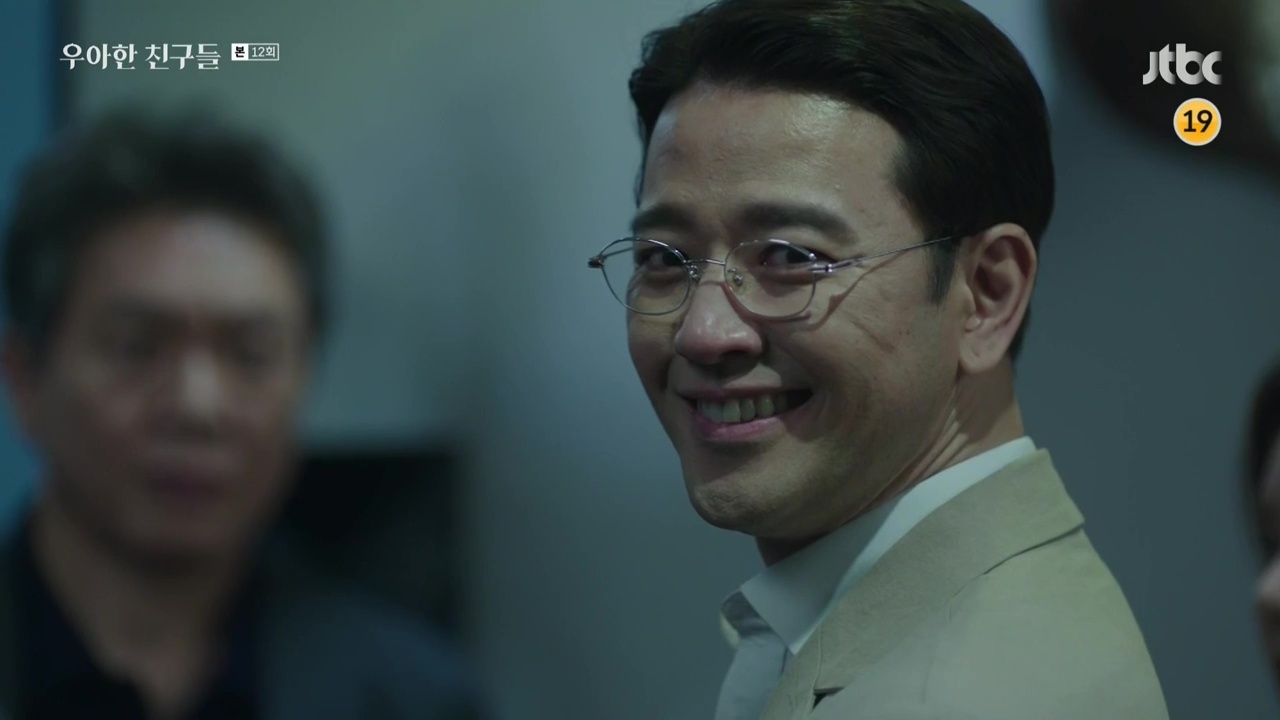 I honestly feel bad for Goong-chul, how can he not know that his friend has been in love with his wife for 20+ years. And even worse, how can Jae-hoon do that to his best friend. He got married, and should've moved on. My favorite character in this drama is definitely Kyung-ja. She knows what up, and is wise about it. She does everything for her husband. This drama definitely doesnt measure up to Sky Castle, or World of the Married, but interesting enough to keep me going.

I think the most insane thing about this show is that people want Jung Hae to be with Jae Hoon. Like...dude stalks her and hires someone to break up her marriage, gaslights her husband, and assaults her knowing the guy HE HIRED assaulted her. I just can't.

If Jae Hoon didn't kill Kang San, I give up trying to figure it out lol. I just hope it isn't a disappointing reveal like in Misty (which, when I think about it, had some thematic similarities to this show).

This week's episodes still good for me. I'm not gonna drop this thrilling show until the end because of episode 17 mystery left me confusing yet.

My clue for episode 17 was an only special.

What the heck was that dinner party?? Who knows what would've happened if Kyung-ja hadn't stepped up at that particular moment!

And @missvictrix, you ask a very good question, how have Goong-chul and Jung-hae survived together all these years? It's shocking that they are so clueless about so much. Then again, maybe I shouldn't be surprised .... after all, Jung-hae just figured out who has been sending her all those cards and flowers!