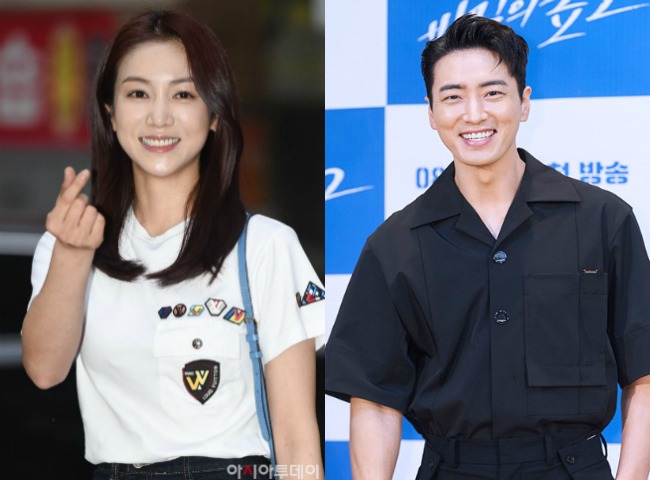 A new action-thriller is being planned on OCN called Dark Hole and casting has been confirmed for Kim Ok-bin (Arthdal Chronicles) and Lee Jun-hyuk (Forest of Secrets 2).

The story is centered around a small town where the black smoke of an unknown substance is found drifting out from a sinkhole. The people who breathe it in become infected by the smoke — turning into monster-like creatures — and the world becomes a battleground in the fight for survival among the remaining humans.

Kim Ok-bin takes on the role of police detective Lee Hwa-sun, who works in the investigations unit. She had no family other than her husband, but he was cruelly taken away from her by a serial killer. As she tries to chase down the culprit, though, she is lured by the killer to come to a small town and she finds herself in the middle of a different conflict. The once quiet town is in a state of chaos and more and more people are being lost to mysterious black smoke.

Lee Jun-hyuk plays a native of the small town, Yoo Tae-han, who works as a rickshaw driver. He has a carefree spirit and can appear silly at times, but he knows when to be serious and has a strong sense of justice. Although he had once been a police officer, he had to resign due to a misunderstanding, and he is still proud of his past experiences. His skills come in handy as well when he meets Kim Ok-bin and they team up to help save the townspeople.

As another installment in OCN’s ongoing dramatic cinema project, Dark Hole will be directed by film director Kim Bong-joo (The Phone) who worked with Kim Ok-bin previously when he was assistant director on Over My Dead Body. And scripts will be penned by writer Jung Yi-do (Hell Is Other People).

OCN’s new drama Dark Hole is currently being planned to air in the early half of 2021.

I am not sure about the rickshaw driver
Here:
https://asianwiki.com/Dark_Hole
LJH-1984’s character is described as working “as a wrecker driver”. A tow truck driver. (That is how I read it.)

Both LJHs were in The Lies Within, but they didn't have any scenes together! They finally got together at the wrap-up party and took a picture, hehe!

Thanks. I will have to dig around for the pic.

Lee Jong-hyuk (The Lies Within) was oldest than 1984-born Lee Joon-hyuk. The former was 48 years old while the latter was 36 years old.

This is why I just rewatch APAD like there's no tomorrow.

Super late reply, sorry! But IA. I ahem was researching his works, and in the early stages of his career he did more cheesy romantic work, so check that out on YT? Also he did a short drama about a wedding/bride thing, and he was more smiley there. It seems he's not oppose to romance work in his interviews, but the works he gets are thrillers. Fingers crossed, its a cute rom-com next!!

Please, LJH, don't be kidnapped and please keep all your limbs this time around.

thanks @bebeswtz for the tag...
but the plot is not for me... its sounds scary, gory and everything that I cant handle watching...
so I am not sure if ill be able to watch this drama...

Thanks for not forgetting me :(((

At least once this show is done the FL won't have to suffer the embarrassment of being known as "Kim Ok-bin (Arthdal Chronicles)".

P.S: This is only 6 episodes. Like the FL/ML pairing. Lee Joon Hyuk impressed me with a character in Stranger that otherwise would've been detested into a lovable character. He's one of those actors that may not hone the spotlight, but always a delight!

Thanks for the heads up on the number of episodes.
I am eagerly awaiting OCN’s SEARCH (Jang Dong-yoon) (available Oct 17 on Viki) which is also part of the OCN Dramatic Cinema project and after just checking SEARCH will have 10 episodes.

Lee Jun hyuk! I like how OCN has been doing shorter dramas. I'll definitely look out for this.

Happy to keep winning but pity they aren't the mutants :P

I saw a plotline on its Asianwiki page (https://asianwiki.com/Dark_Hole) and that city was Muji. I knew Muji was a fictional city and in real life, Muji also had all three real life locations (https://en.wikipedia.org/wiki/Muji_(disambiguation)): two Chinese places (both from Xinjiang) and a major Japanese retail company.

OCN dramas always seemed to fit my taste. I end up finishing all the drama's I watch from them which doesn't happen often nowadays. So I'll prob watch this too.

this is by stranger from hell writer wow

Me reading the title: omg omg omg please let this be a cute drama! I love these two!!

Me reading the article: :(