Park In-hwan pursues his passion for ballet at age 70 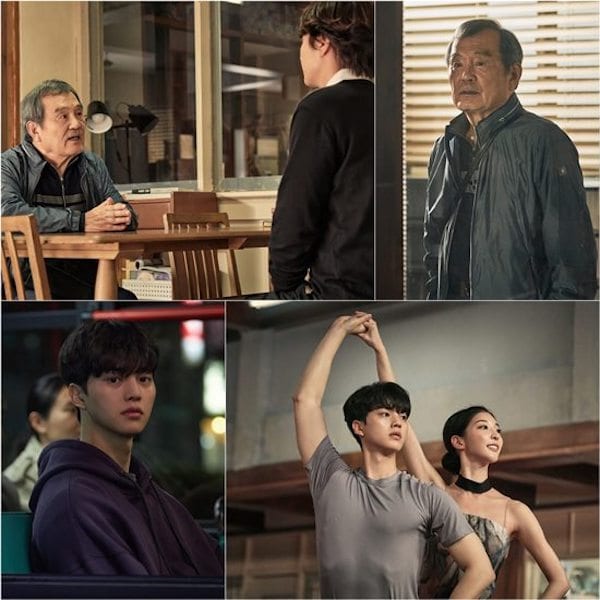 New stills and a teaser for Navillera, featuring Park In-hwan (Brilliant Heritage) and Song Kang (Love Alarm 2), have been released. This drama tells the story of a seventy-year-old retiree finally pursuing his dreams of ballet and a twenty-three-year-old ballerino regaining his passion for the art despite life’s vicissitudes.

The teaser begins with Park In-hwan’s seventieth birthday party. After he blows out the candles, a young woman asks him, “What did you wish for?” Na Mun-hee (Dear My Friends), playing his wife, answers for him, “To live without any illnesses and pass away. Isn’t that right, honey?” As she turns to him, his expression says that he might not fully agree.

Park In-hwan’s narration begins: “My days are too long. I don’t know what to do.” He finds a poster of Swan Lake, the ballet. His friend encourages him, “This is the time. Do what you want to do.” Park In-hwan attends the performance, and his eyes alight with joy.

We switch over to Song Kang, where a bunch of no-good ballerinos led by Kim Kwon (Leverage) come up to him and rile him up, “There’s a rumor your father’s getting out of prison. But you don’t have any right to live a good life.” His father calls Song Kang from a payphone, and Song Kang denies his existence.

Narration from Song Kang’s acquaintance sternly reminds him, “The national [ballet] auditions are right around the corner. Get your head together.” He falls and collapses in the dance studio, completely worn out. He sees Park In-hwan watching him from the corner, and frustratedly yells, “Grandpa, what are you doing here? You were here last time too. Why do you keep watching me?” Park In-hwan tells Song Kang, “Because I want to dance ballet.”

I'm really excited about this, really excited. I love the entire plot, but Song Kang is my worry. He does this pouty thing that can get really annoying.

And my worry are all those obvious cuts to hide that the actor isn't performing the ballet routine. It's quite ridiculous in previews when they show the actor's head in a closeup and then the body without head so you know it's a professional ballet dancer standing in for the actor. I'm sure they had a number of actors who were also ballet dancers but they were anonymous and a recognizable name was needed. It looks stupid, sorry. Took me right out of the preview.

I want to watch Billy Elliot now... But I know that I will cry...

I'm hopeful about this. I especially like that we're seeing a show about an older person trying to pursue a goal or a dream. That's new and very interesting. It's also something I wish for my own parents (particularly my dad, who is semi-retired at this point and who has struggling with what to do with his new spare time even before corona).

My thoughts exactly. The plot is unique, and the posters and trailers so far have been gorgeous. I'm also quite a fan of Song Kang tbh, and really looking forward to seeing him portray a ballet dancer. (Also, sending best wishes to your dad)

Sending best wishes to your dad too! I hope he finds something that is fulfilling

So excited for this. I hope Song Kang can keep up with much experienced Park In Hwan.
Never watch Song Kang before but he's hot these days, isn't he?
Park In Hwan won't disappoint, of that I'm sure.

OK, so 6 days to go. I will be watching this for sure.

Noooooo! I do not want Kim Kwon to play a baddie!! 💔

But betcha I will be rooting for him. 🙂

I'll be watching this for sure.

Oh.. I don’t wanna say this but this is the show I probably want to see the most. I hope I didn’t jinx it by saying that.

I'm SO excited to watch this... looks so interesting!

Thank you @tineybeanie for this piece. This might be the hook that draws me into watching tvN’s NAVILLERA available on Netflix (US).
I was vaguely aware of this drama but the pics of the leads and the trailer grabbed me. The story of an older man trying to fulfill a dream and a young man trying to pursue a dream could be really interesting.
Then there are the ‘maybe bully’ ballerinos. Nope. These are two characters I can root for.

I've been looking forward to this drama.
I really hope to be good!
But ballet is so hard to fake....

I don't usually watch slice-of-life genre, but I am eager to watch this because of the fresh theme