Contestants battle for survival and money in Squid Game 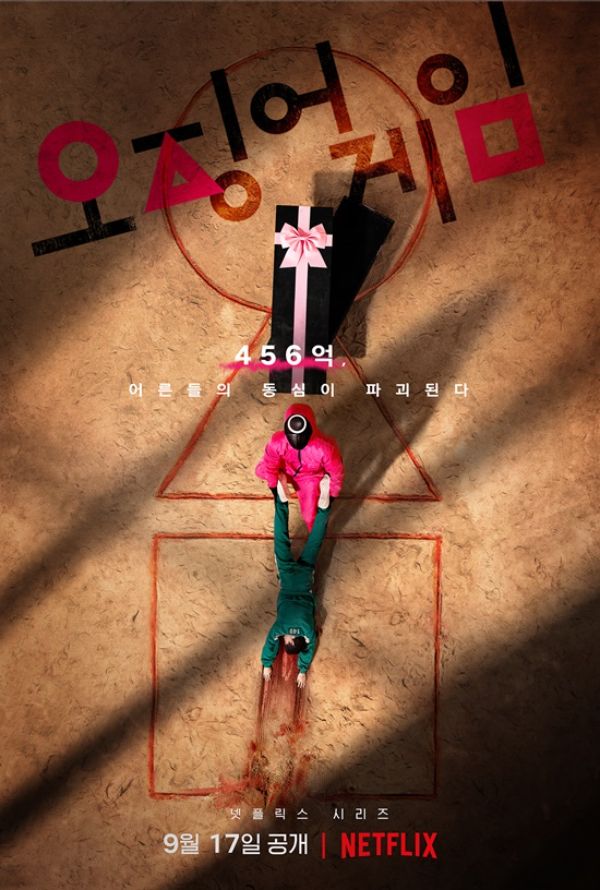 The drama is a creative commentary on the ruthless workplace competition of today’s society portrayed through the lens of a nostalgic children’s game. The poster above reads, “45.6 billion won, the harmony of adults will be destroyed,” as a pink-uniformed individual forcefully drags a bleeding contestant to a ribboned coffin. The circle, triangle, and square lines symbolize the shape of a squid.

456 desperate contestants of different ages, occupations, and backgrounds are gathered to play one game a day, until there’s only one person left standing. The penalty for losing a game is to lose one’s life.

In the teaser, a golden masked figure welcomes the contestants. A troop of pink hooded figures with triangle and square shapes on their masks fill an underground room. The display shows the 456 players of the survival game. A man walks on a digital floor that shows each of the players labeled by a number (potentially their current scores). An army of pink hooded figures sit in front of computers, calculating aspects of the game.

The contestants, all dressed in the same green tracksuit, move through a cartoonishly bright landscape. The first game seems to be tug-of-war with five minutes on the clock. The contestants line up in an orderly fashion as pink hooded figures supervise once more in an adult-sized playground. One woman pounds her bloodied fists on a steel door that won’t open. The number of players decreases to fewer than 277.

In a scene that looks to be a huge indoor field with fake landscapes painted on the walls, all the contestants are gathered to one side, except for the ones that are strewn on the ground, presumably dead. The announcer says: “If you do not want to participate in the game, please let us know now.”

A woman screams as the person in front of her is shot, spraying blood into her face. The contestants begin to crowd the door, with not many seconds left on the clock. Glass shatters, and someone falls through. Woman No. 67 looks extremely determined as she dashes ahead of her competitors.

We see that the game of tug-of-war results in one team’s plunge to death. Back on the field, competitors run as they dodge the bullets being aimed at them. A short cut of Lee Jung-jae is shown as the clock counts down to “00:00.” The last scene shows the golden masked figure again as an announcer says: “Let the games begin.”

Sisyphus, Devil Judge and now this...I may to start watching " A Handmaid's Tale" for a sunnier, more uplifting take on modern society.

Guess there will be lots of chances for Netflix-style subtitles.

Hope the show won't be as unwatchable as the description makes it sound to me.

Oh good, the future of the workplace is the Hunger Games.

Alice in Borderland, anyone?

That was my initial thought too!

This looks like Liar Game + 3% + Alice in Borderland, and I am here for it. I love stuff like this.

This seems like a nice drama that drew some inspiration from the classic Lee Min-ki film Million.

Yes yes, I thought about this too!

wow, I love this concept and don't expect new things, is always the same developing, but well.... Totally gonna watch it if I have time.

PRIMAL ZODIAC SIGN OF. SQUID. Squids are powerful personalities that can only be 'checked and balanced' by themselves. They are highly capable, intelligent individuals who seem to know everything. Generally good natured, they also have a hidden inner dark side which resides deep within themselves. -unquote

This drama full of symbolism. Those controlling the game are masked and work underground while those killing each other are on the surface in ratsuits. Where they find that kind of money to pay people to kill each other? From the money they would die for.

I was kinda disapointed by Alice in Borderland, so not sure for this one.

Sounds like a mix of Alice in Boderland and Liar Game. I loved both so guess I'll be watching this.

This gives me Liar Game vibes. If it’s anywhere near as good as that, I’ll consider it a win for the show.

First thing that came to my mind is Hunger Games + Alice in Borderland....I might regret it but I think I will try watch it since it has Lee Jung-Jae :P