Let Me Be Your Knight

Let Me Be Your Knight: Episode 1 (Review) 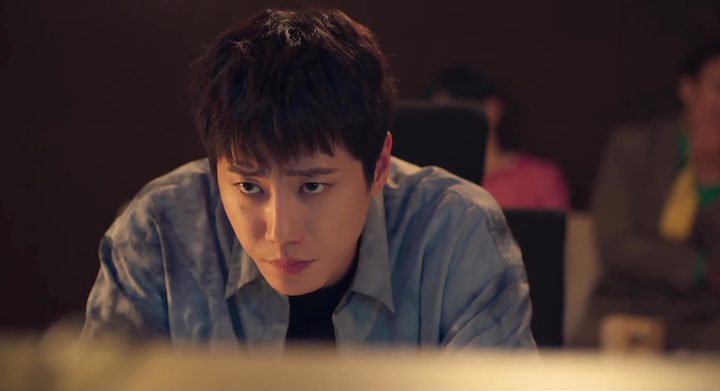 It’s a blast from the past with SBS’s new drama Let Me Be Your Knight. The drama has the old school premise and tone we might have expected from a drama about ten years ago. This, of course, means it’s impossible not to get a kick out of it.

Note: This is a first episode review only.

All it took was the opening sequence to convince me of how cheesy this drama would be — our idol band member wanders in a stupor under a very CGI-enhanced moonlit sky. Sold! Now, all that’s left is for the show to lure me in. Unfortunately, the first episode lacked the energy I was expecting — but it did execute all the setup required for the rest of the drama, so here’s hoping it brings all the cheesy goodness it promised me.

This weekly Sunday night slot (and simultaneous iQIYI streaming) might signal a low priority drama to some, but to me it sends the hopeful thought: can this be the next Imitation? After all, Jun is back, and he’s playing the leader of an idol band again.

Jun plays YOO TAE-IN, leader of the super successful band LUNA. In the livestream that opens the drama, we meet all the puppy-like members on their instruments — and then we meet Tae-in, who bangs onto the stage just as grumpily as one might expect.

Things quickly go south when he collapses on stage in the middle of a performance and is rushed to the hospital. Somnambulism is the diagnosis, but what we see behind the scenes of his life and lifestyle, and it’s clear that he’s not living happily.

Tae-in was given full creative control of LUNA’s newest album, but it flops horribly, which crushes him. In flashback we see all the all-nighters he pulled working on the album; there’s a quick sequence of sleeping pills and sleepless nights to let us know he definitely has a problem with getting his shut-eye.

Jun has always brought a lot of life to his roles, so I’m struggling here with his role as Tae-in. Unhappy, perfectionistic, a little anti-social, and desperately in need of sleep — he’s not the most likable guy. But he’s also not that typical unlikeable drama character that actually is likable, so the character is either completely flat, or we just need to spend a little more time with him for the color to come out.

As we’re watching Tae-in’s story unfold, we also meet our heroine, IN YOON-JOO (Jung In-sun). If you thought the grumpy idol was archetypal, Yoon-joo is even more so. She’s our perky hard-working Candy, desperately saving pennies to buy back her childhood home. But the house isn’t her only dream: she also dreams of being reunited with her twin sister. After their parents’ tragic death they went to an orphanage, and her sister grew up to become a well-off American doctor.

As can be predicted, Yoon-joo gets utterly conned out of her savings, buying a house that she didn’t really buy, and left penniless and heartbroken. When she’s at her lowest point, weeping in a playground over a couple of bottles of soju, someone else is also having a crisis at the playground: it’s Tae-in. He’s sleep-walked all the way to there, guitar in hand, and fell asleep on the bench in his hospital gown.

Their first (technically second) meeting gets off to a horrible start — Yoon-joo throws up all over him, and Tae-in is so out of it at first he thinks she’s a sasaeng fan who’s snuck into his hospital room. It’s an appropriately awful encounter, so of course they’ll meet again.

That meeting happens sooner than they think. Tae-in isn’t willing to risk the success of his band over his illness becoming a hot news item, and his CEO and doctor think the best course of action is for him to get treated by an in-house doctor. Like a tried and true misanthrope, he hates this idea, saying it’s already tiring enough to live with the LUNA members, also adding, “I hate all my acquaintances and I’m afraid of strangers” lol.

Mistaken identity hijinks are the root of our plot, though, and there is a reason Yoon-joo has an identical sister… who just so happens to be a world-renowned sleep doctor.

Yoon-joo has been hanging all her hopes on reuniting with her sister, but she’s cold as ice and uninterested in a relationship with her. However, she offers a single instance of help (couched in strange fairy godmother language) which Yoon-joo finds herself in despearate need of after the property scam.

And so, Yoon-joo heads to a hotel penthouse to ask her sister for help just as Tae-in and his CEO arrive and ask the famous sleep doctor to move in with the LUNA members and treat Tae-in. This, of course, is where all the fun starts — but as to the whys and hows of both parties agreeing to this cohabitation, we’ll have to wait for the next episode.

Tropey and ridiculous in its setup, I keep feeling like this drama should have been much more fun than it was. However, I’m willing to give it the benefit of the doubt here — perhaps after the setup, the fun will awaken once Yoon-joo moves into the dorm.

To its advantage, the drama has Jun, and a bunch of other real-life idols playing the LUNA members and bringing the cuteness. It also has only twelve episodes, which can help us through the flimsy plot without it getting too draggy. Hopefully, this gives them a reason just to focus on the fun and hijinks, and not too much of anything else. If it can’t be original, it must be fun.

My other qualm is with the casting of Jung In-sun here — she seems a little old to play the counterpart to all these puppy idols. If that was the drama’s actual intention (noona dorm invasion) that would be one thing, but I don’t get the feeling that Yoon-joo’s character is meant to be the mature mother hen. Instead, if she’s just going to be the cute and feisty Candy here, I would have rather seen a young up-and-comer who can also pass as a genius doctor.

The final bit of confusion is with the choice of English language title, since the Korean title uses the word “night” not “knight.” Night makes sense in a drama about a sleep-walking idol. But as to knights and if they’re pushing metaphors or just confused, I suppose we’ll have to find out.

Disappointments with the first episode aside, there’s enough of a twinkle of hope for me to give this drama one more week to deliver what it promises. Come on, drama, you know you want to.

ANOTHER new show? How will I keep up?

And who needs a sleep doctor when we have mediocre kdramas to knock us out?

I watch this for Jun. I first noticed him from Imitation. This drama is lighter and funnier than Idol Coup (also new Idol theme drama on iQiYi right now)

So it's good for me.

Could you please add this drama to the currently airing drama list here?

I watched this first ep out of pure curiosity but I ended up liking it a lot more than I thought I would. I saw the tropes coming a mile away yes, but I really enjoyed LUNA's music (much much better than the groups in Imitation!) and perhaps because I love DAY6, a real-life band. I thought Jung In Sun was absolutely gorgeous, and I felt quite deeply for Tae-in when the song flopped (also cos I thought the song was rly good???) I did find everything really exaggerated though, but there's heart in here that's keeping me glued for now.

I love you @missvictrix , I'm sold over the most adorable puppy that is our maknae.
Why all Jun's maknaes are cute

Seeing how the fake doctor setup was a misunderstanding that she was trying to make them aware of immediately made me happy.

Did I read cheesy? That's totally my lane, I'm in! It's unfortunate that they're also airing Idol: the coup at the same time. I love both Hani and Jun, and I don't mind some awkward acting if dramas can deliver some quality singing and dancing... So I guess I'll hang on to both dramas for now. Let the cheesy battle begin!

"young up-and-comer who can also pass as a genius doctor"
Juist to add to its credibility? Ha