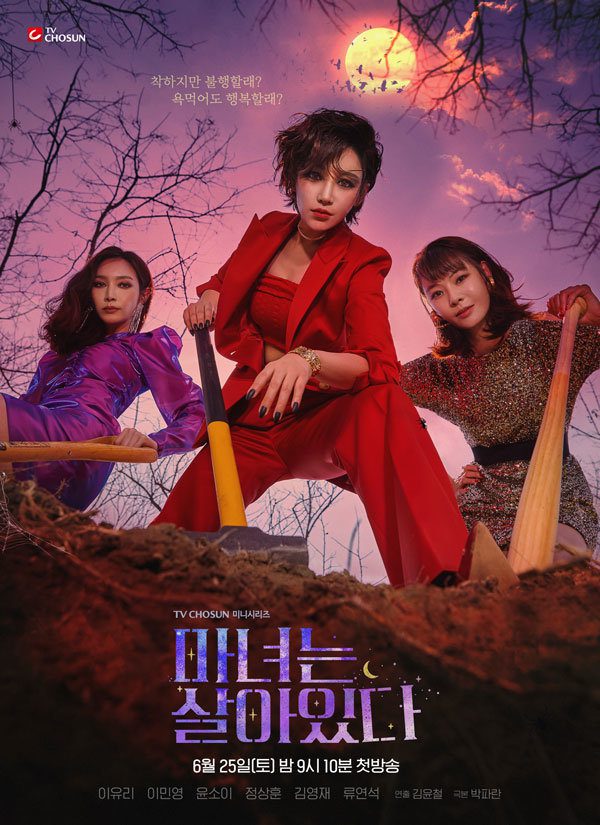 More promos have been released for TV Chosun’s upcoming black comedy The Witch is Alive, including fantastically colored posters as well as a quirky video teaser.

In an ensemble cast, Lee Yuri (Lies of Lies), Lee Min-young (Love ft. Marriage and Divorce 3), and Yoon So-yi (Get Revenge) star as three ordinary women who become “witches” together, bonding over their shared dream of ending marriage and getting rid of a certain someone in their lives.

Their respective husbands are played by the cheating Jung Sang-hoon (Again My Life), the absent Kim Young-jae (Artificial City), and the supposedly deceased Ryu Yeon-seok (The Killer’s Shopping List).

The newly released teaser starts with Jung Sang-hoon getting greeted by the press as Lee Min-young explains in voiceover, “You know, right? Her husband is on television. The nation’s announcer, Lee Nak-goo.” We then jump to a sequence of Lee Yuri’s many faces, struggling in her marriage, while Yeh Soo-jung (Link: Eat, Love, Kill) remarks, “Being still alive and not dead, we get to see each other again like this.”

After Lee Yuri blows out her birthday cake candles, her friends ask what she wished for and Lee nonchalantly responds, “For someone to get killed.” The wise Yeh notes that, “In your mind, you’ve already killed and revived him a thousand times every day. People all live like that, no?” But Lee’s anger against Jung Sang-hoon isn’t easily abated and she screams, “Dog Nak-goo!”

The appearing text screens reveal Lee Yuri’s internal dilemma, “To die or to kill.” Meanwhile, Jung Sang-hoon puts on a public show of tears and Lee coolly observes, “So this is how you’re going to play this game?” Yoon So-yi is shocked when she hears Lee’s plan, “Are you crazy? You’re actually going to do that!?” But Lee is determined, and the teaser closes on her vow: “All right, let’s do this. Let’s go all the way to the bottom of hell.”

Written by Park Pa-ran with PD Kim Yoon-chul (Woman of Dignity) at the helm, TV Chosun’s The Witch is Alive premieres June 25. Part 1 (episodes 1-6) of the drama will be airing two episodes a week in the Saturday-Sunday slot, with part 2’s episodes being broadcast once a week. 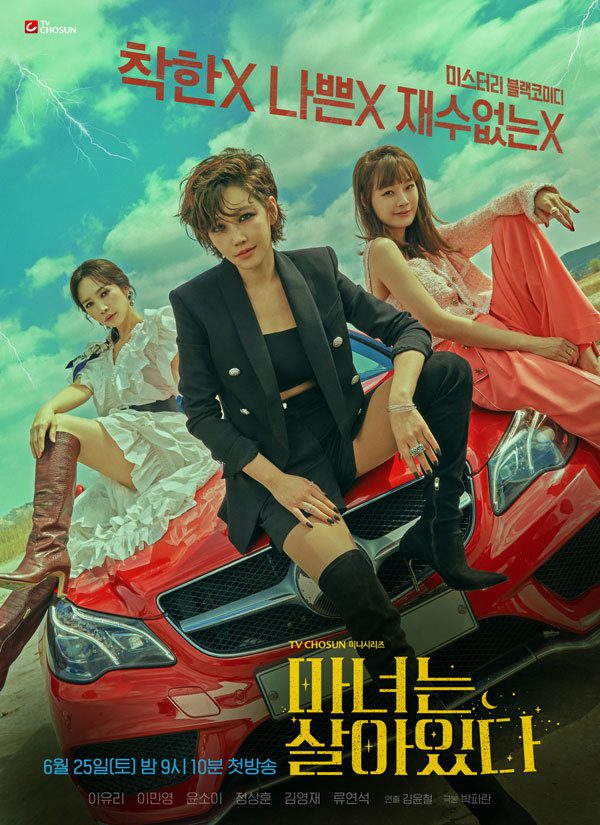 These 3 lead actresses had played mistress/villainess role before, its going to be fun!

YES! I can totally relate to this. I just got 160lb bag of cheating crap out of my life . I got movers to take all his stuff and drop it off at his side piece house....my best friend . Good Luck with that sweetie LOL.

Is anyone else afraid the posters are going to be more interesting than the show? Lee Yuri is usually great though, so I'll at least check it out.