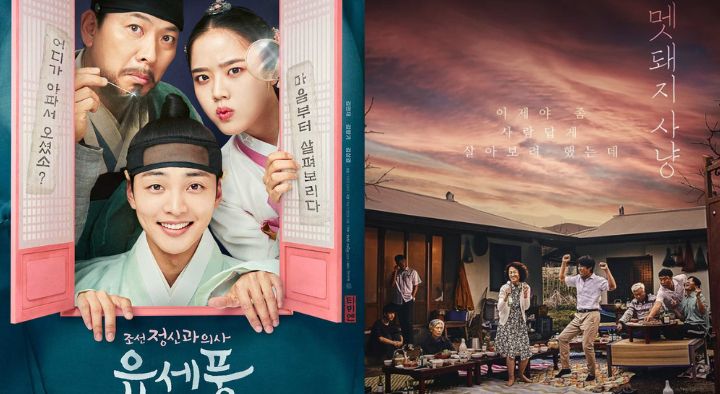 More dramas coming in hot! This week we have two shows for the start of our week — one a comedy sageuk starring Kim Min-jae and his killer smile, and the other an eerie short-form drama and screenplay contest winner. 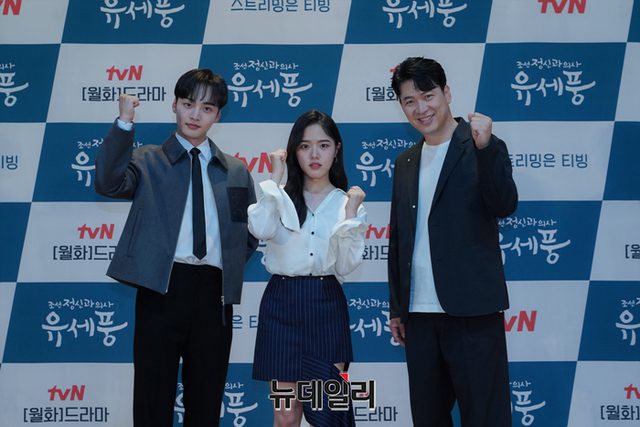 Reasons to watch: They had me at cuteness and emotional healing. Kim Min-jae plays our hero and once-physician to the royal family. After he’s ousted for ~reasons~ he eventually teams up with Kim Hyang-gi and Kim Sang-kyung. Each bring their unique story, talents, and emotional wounds to their practice and wind up helping their patients heal from both their physical and emotional wounds. It’s great to see this attention paid to hurts and traumas in a way that’s about addressing and healing them (instead of just using them for plot movement), and the drama could wind up striking a nice balance of cuteness, comedy, and heart. 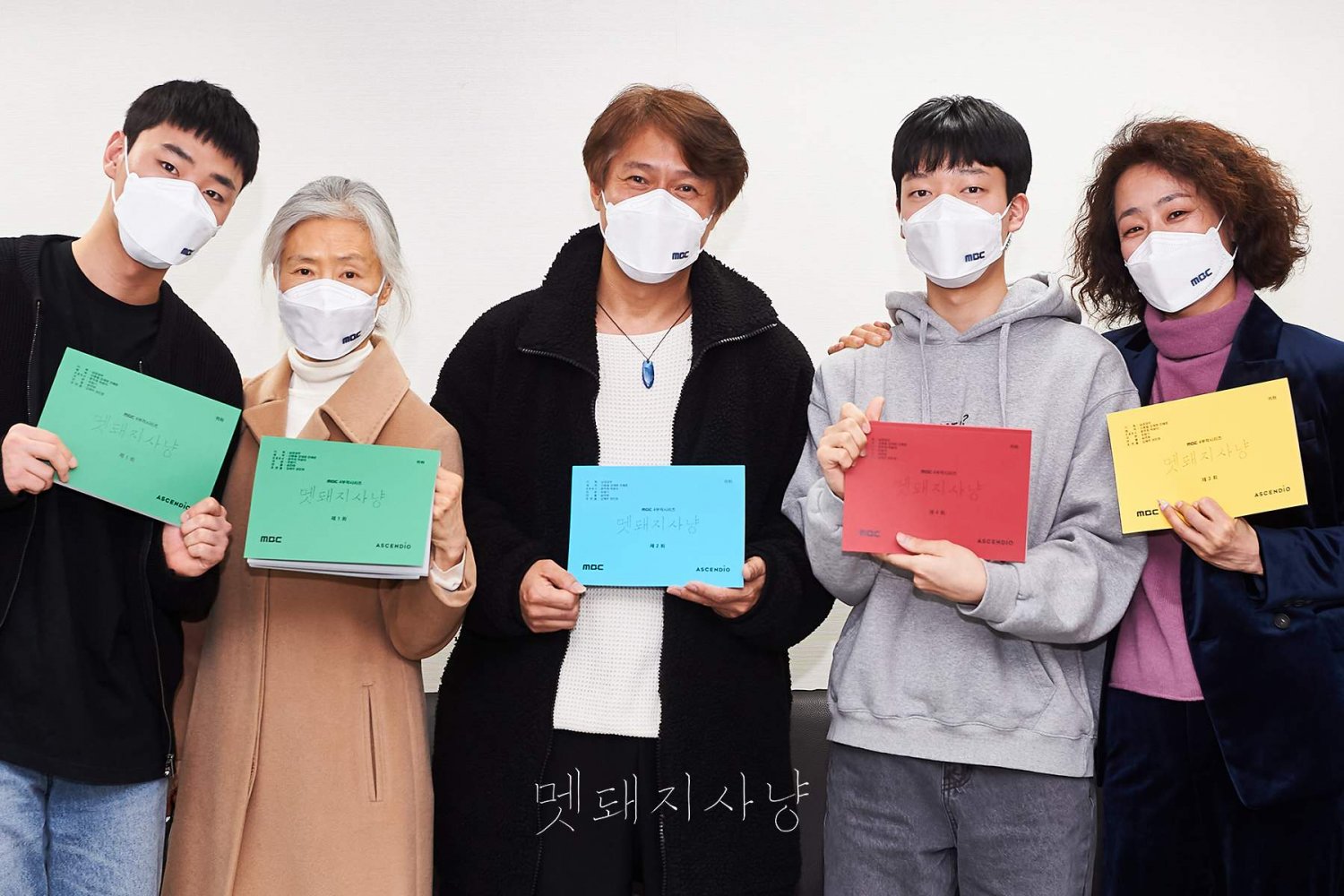 Reasons to watch: MBC makes an interesting choice for the Monday-Tuesday slot and is airing a 4-episode drama once per week. The drama stars Park Ho-san, Yeh Soo-jung, and Kim Soo-jin, among others, in an eerie tale of a hunting accident, a son who has disappeared, and a whole lot of mysterious happenings. Short-from dramas can be a lot of fun as they break the arcs and pacing we’re so used to seeing, and if the drama’s promo materials are any indication, this will be a well-directed and atmosphere-heavy drama. (The superfan in me can’t help but also point out that it’s been a while since we had a wild boar loose in dramaland… could this be the first encounter since Tae-kyung’s in You’re Beautiful?!)

@missvictrix for me it’s the fact it’s a historical drama without the seriousness of the court politics. I know it will be there but it will land differently because of the genre.

It was what I hoped for Bosssam and I was very disapointing... So one of them can still be a hidden royal member or anything like that.

Heyyyy... some of us like political sageuks 🥺🤣
(says the person who dropped Bloody Heart lol. Okay that wasn't because of the politics tho~)

Curious now! Why you dropped it?

Mmmm I wasn't invested in either the characters or the story for any reason, which meant I didn't care about anything on screen, which made it hard to click play and boring to watch. There was something lacking for me in the writing that just made it feel kind of hollow? and whilst it was pretty it didn't go any deeper on a directorial level (it was pretty for the sake of being pretty rather than having added symbolism or added narrative weight to its cinematography), which contributed to this feeling, so I dropped it at episode 6.
A lot of people really loved it but I still don't quite get why. 😅😅😅

You missed something exceptionally good and unique with Bloody Heart.

Did I though? Like for me personally that is? I'm not so sure.

SPOILER CAUTIONS I dunno for you personally, but I enjoyed the duel of wits between FL and Jang Hyuk's character. Her agency as a character was like nothing else that I've seen, and his character has a fully fledged arc. The King too. I had zero appreciation for Lee Tae until this. His character is surprisingly twisty considering how limp he is in the beginning. Of course it was a visual pleasure too. It's not so much a romance as it is a story about a woman who becomes a queen.

Thank you for sharing why you liked it! I'm not sure your given reasons would've been enough to change my initial feelings above, but that's ok.

... coming back after the first episode and laughing at this thread and feeling mean for doing so- I was thinking of you @reply1988 in certain scenes. Did you make it through? 😅😅

Yes, how funny was that for literally being all the things that I specifically said I didn’t want in terms of the heaviness of politics, suicide/murder with little evidence of the light low key humour filled storyline.
I managed to make it through episode one still waiting for two to drop but I think (hope) that the balance of heavy topics covered with humour and slice of life characters we can connect to will be more evident so by the time we get to episode four it will be at a level I can handle. I am interested enough in the characters to stay for the duration even if it remains at this level of heaviness as it is just within my limits of still being entertaining.

That's good! I actually also enjoyed the first ep quite a lot, but I'll share more on the recap maybe~

As I was reading a thought popped into my head, "Hope jezz will post about the legal streamers". Muchas Gracias. Now to go check if I still have Kokowa.

I miss watching Sageuks. Any sageuk really. Which means I will be starting Poong instead of watching the 50 episode sageuk I SHOULD be watching... 🙄
And not Wild Boar Hunting because the trailer had too many hunting lemons. lol.

I am ready to return to sageuk land I will also be starting POONG Sic. I always hope for the best for a new production but I have a major concern.
If the comedic will be emphasized (and I just picked up that this is being presented as a comedy/sageuk) then my main concern is ML Kim Sang-kyung.
FL Kim Hyung-gi is totally new to me.
Comedy or drama is no problem for ML Kim Min-jae as we saw in DALI and frankly I prefer his boisterous Moo-hak in DALI to his wrapped uptight Joon-young in BRAHMS.
I loved Kim Sang-kyung’s performance as the serious Secretary Lee Kyu in THE CROWNED CLOWN. He and Yeo Jin-goo were terrific together. However I found his attempt at comedy last year in RACKET BOYS totally off. His character (as performed) was the big weak link in a great cast.
Nevertheless I will be there. I am still hoping to see a drama with both Yeo Jin-goo (rl 24) and Kim Min-jae (rl 25) together. They could be brothers in appearance. I guess KMJ is hyung.
PS. There are also questions about the writers, like what have they written and are they up to writing comedy.

WOW, now that you mention it, Kim Sang-kun was the reason I just couldn't enjoy Racket Boys. The actor, who was the ballast holding the plot of Crowned Clown together, just wasn't up to snuff a comedy.

All valid points! I'll be starting it anyway and likely if it collapses it'll be an early drop haha.
I am also still waiting for my Min Jae X Jingoo drama, preferably one where they play twins, and Min Jae is the charming, funny twin, and Jingoo is the angsty, serious (maybe slightly shady) twin. I have it all mapped out in my head. It will be perfect. Where is it dramaland! Jingoo has played twins effectively THREE TIMES, once with himself, and you still haven't given me my MinjaexJingoo pairup! Not fair!

I didn't watch "Racket Boys," but I thought he could do comedy after "What Happens to My Family?"
Sad to hear that he wasn't up to expectation.☹️

Jin-goo and Min-jae would be the perfect twins in a 3 Kingdom-era sageuk. The male versions of Queen Seon Deok and her twin sister Princess Cheonmyeong. lol (Historically, they weren't twins but in the drama, they were).

@wishfultoki
Where art thou Toki?

Stop giving me more versions of a JGXMJ pair drama I want... I already have like 3

He didn't bother me so much in Racket Boys, it was more his character but he got a nice redeemption arc.

You should watch Racket Boys, it was a nice drama.

Hi @kiara! Great to hear from you. Did you make your move across the country?
THE LONGEST DAY IN CHANG’AN airs still on my Viki watch list. Did you finish it? I want to be able to give it the attention it will require.
After catching Zhang Ruo Yun’s terrific performance in MEDICAL EXAMINER: DR. CHIN (2016) (Viki US) I followed him to the 38 eps. wuxia SWORD SNOW STRIDE (2021). He is an amazing actor.
I am waiting for the BOSSAM reunion of Jung Il-woo and Yuri in GOOD JOB.

Hi @marcusnyc20, bong-soo
Well, our relocation got extended 'till 2026, so I'm happy. I'm not ready to move.
I have a lot to read up on CHANG'AN, and finishing it takes me forever.
I've only seen Zhang Ruo Yun in JOY of LIFE, but he left an impression. Should I try DR QIN first or SWORD SNOW STRIDE?
I'd love to watch our BOSSAM couple again. Yuri did steal my sageuk heart.

@kiara, moving can be very stressful so I can understand your relief.
After SSS at some point I will be moving on to JOY OF LIFE (2019).
For you I would recommend first going back to MEDICAL EXAMINER: DR. QIN (2016). 20 episodes running from around 30-40 minutes per episode. Excellent crime/mystery drama. I watched it earlier this year and it holds up very nicely.
Here is a rave Soompi review that pretty much describes the drama and characters.
https://www.soompi.com/article/1154249wpp/reasons-watch-medical-examiner-dr-qin
(Also you get to see Zhang Ruo Yun out of those historical robes looking great in home tailored suits. Lol he gives Lee Joon-hyuk (1984) a run for his money in the suits department.)

Thank you! I'll start with DR QIN then.

I'm on a Zhang Ruo Yun streak as we speak. Make sure to watch Joy of Life, if you haven't already.

Same, but I've been venturing to the Han and Song Dynasties for a change. Joseon is my least favorite.
If, for some miracle, Park Hae-il and Han Ye-ri pair up for a Jeong Hyun-min sageuk, I'll be back in a flash. *Impossible dream*

Let us not stop dreaming our impossible dreams, Kiara hahaha

Kim Min-jae and Kim Hyang-gi look like teenagers in the drama poster. I will probably try it, but I have a hard time with comedic sageuks.

Glad to see Kim Min Jae back. Hope the drama will be nice and heartwarming besides the humor.

Not exactly my type of dramas. I usually enjoy a saeguk with a lot of politics and scheming ministers. Will give 4 episode time for Poong to see if I should continue or not.

I watched and really enjoyed the first two episodes of POONG. Kim Min-jae as usual does not disappoint. This is my first Kim Hyung-gi drama so she starts with a blank slate. And I thought she was fine. The cameo by the great sageuk veteran Ahn Nae-sung in episode one was excellent. Probably most important to me was Kim Sang-kyung’s portrayal of Doctor Gye Ji-han.
After his weak (imo of course) performance in RACKET BOYS I was very concerned on what his approach to this role would be. In a way he will be a Kim Sam-bu (ish) (RD, TK) type teacher to Poong and let’s just say after 2 episodes I like what I saw. I am keeping my fingers crossed.