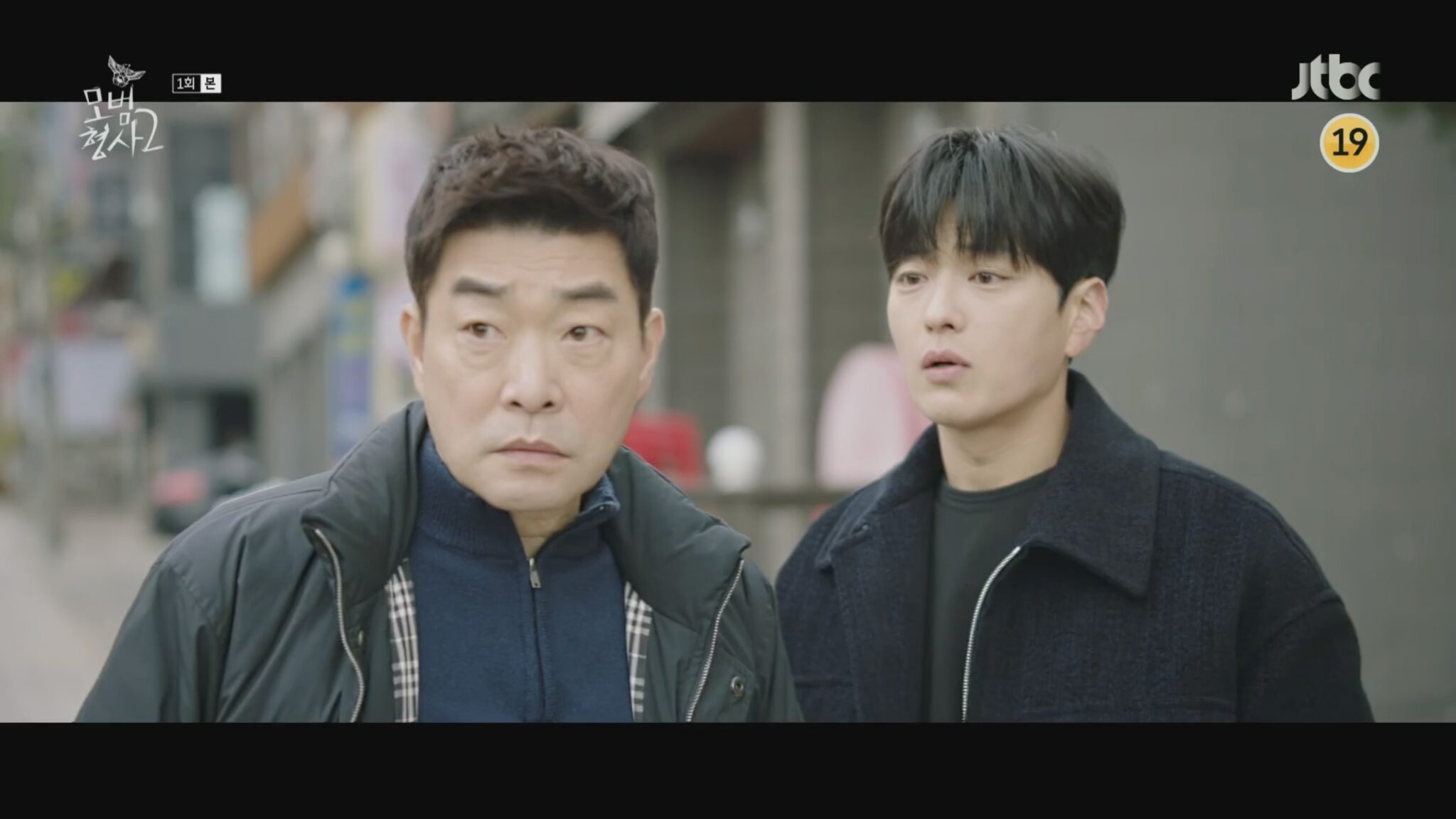 A simple provincial case soon unfolds into much more, bringing our detective pair back to the forefront. Time is of the essence when dealing with a spate of serial murders, but hasty conclusions may lead to even worse consequences. 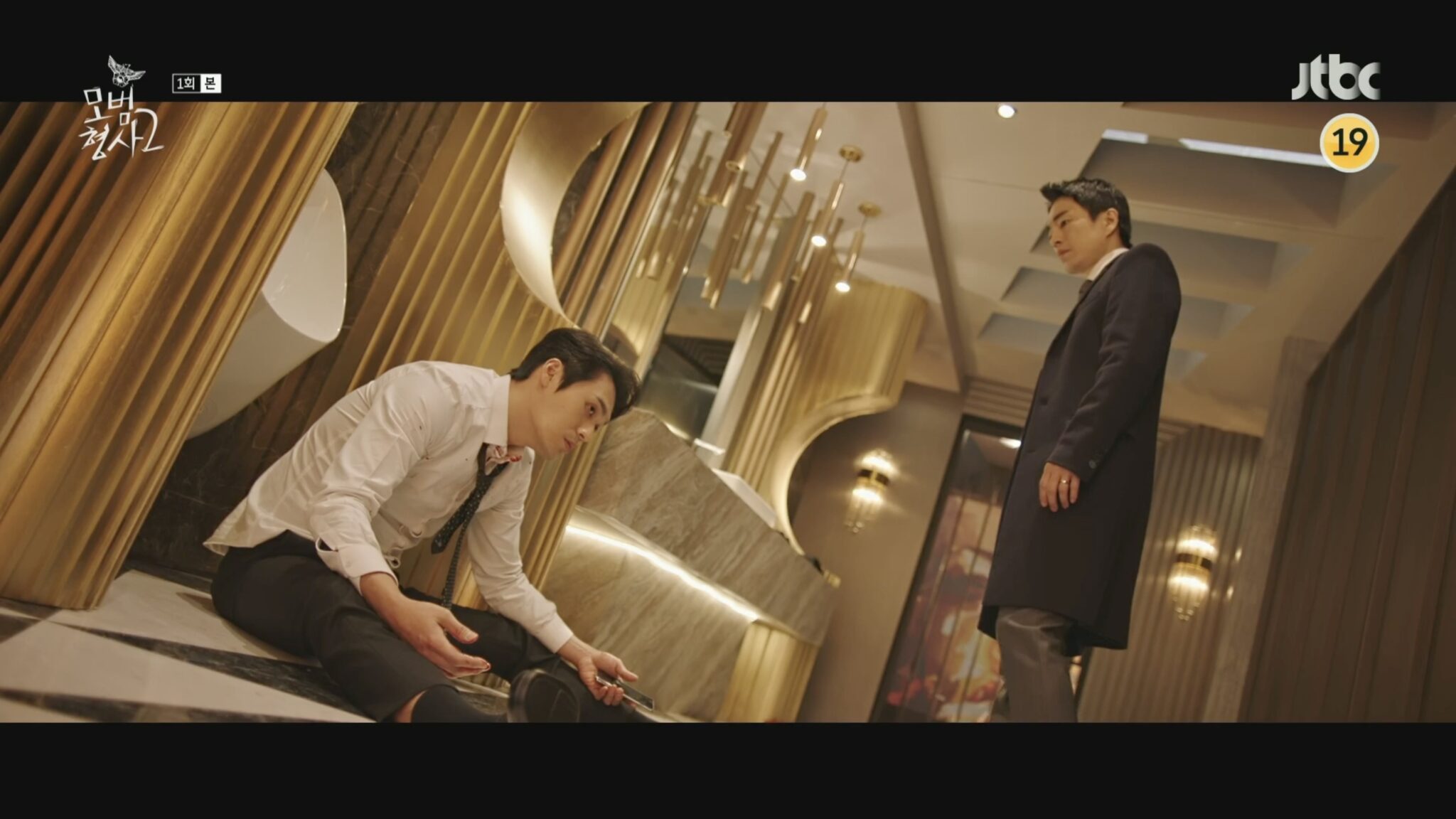 The Good Detective 2 opens with a shock — a man whom we’ll come to know as CHEON SANG-WOO (Choi Dae-hoon) chases a woman down a hallway, hitting her viciously and dragging her away by her hair.

The next we see of her, she’s passed out and bleeding from a head wound. Sang-woo stares blankly into space — hmm, did he not expect things to escalate this far? — until his brother-in-law WOO TAE-HO (Jung Moon-sung) arrives, having been called by Sang-woo to clean up his mess. 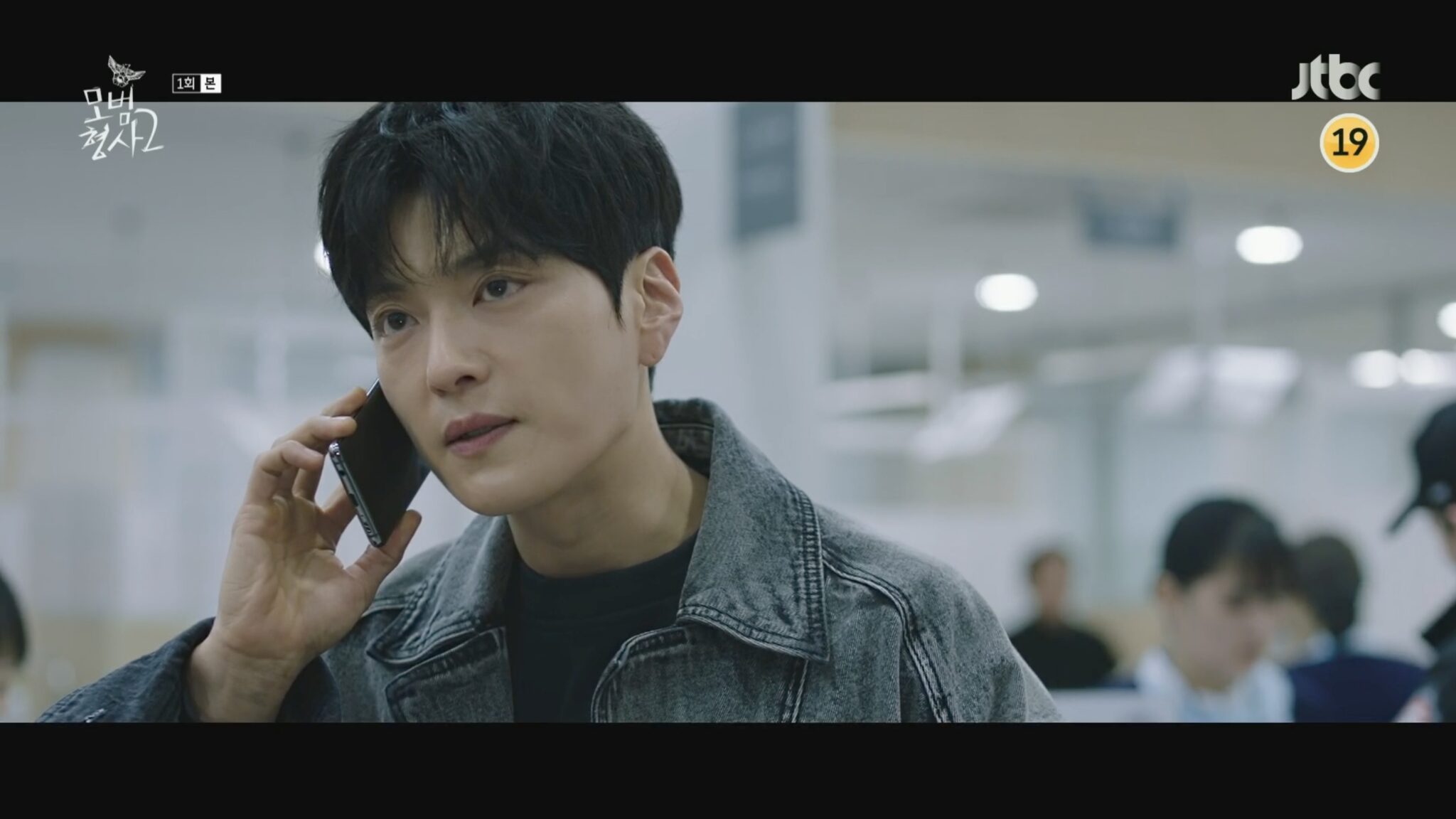 The woman is rushed to the hospital, and our protagonist is put on the case. Detective OH JI-HYUK (Jang Seung-jo) finds the lack of CCTVs and the cleaned-up crime scene suspicious; the victim’s injuries are far too serious to be a mere accident.

Unfortunately for Ji-hyuk, the perpetrator is backed by the powerful TJ Group. That means he’s forced to take a “voluntary” leave of absence for poking his nose into the case, and the victim gets transferred to a hospital in America. 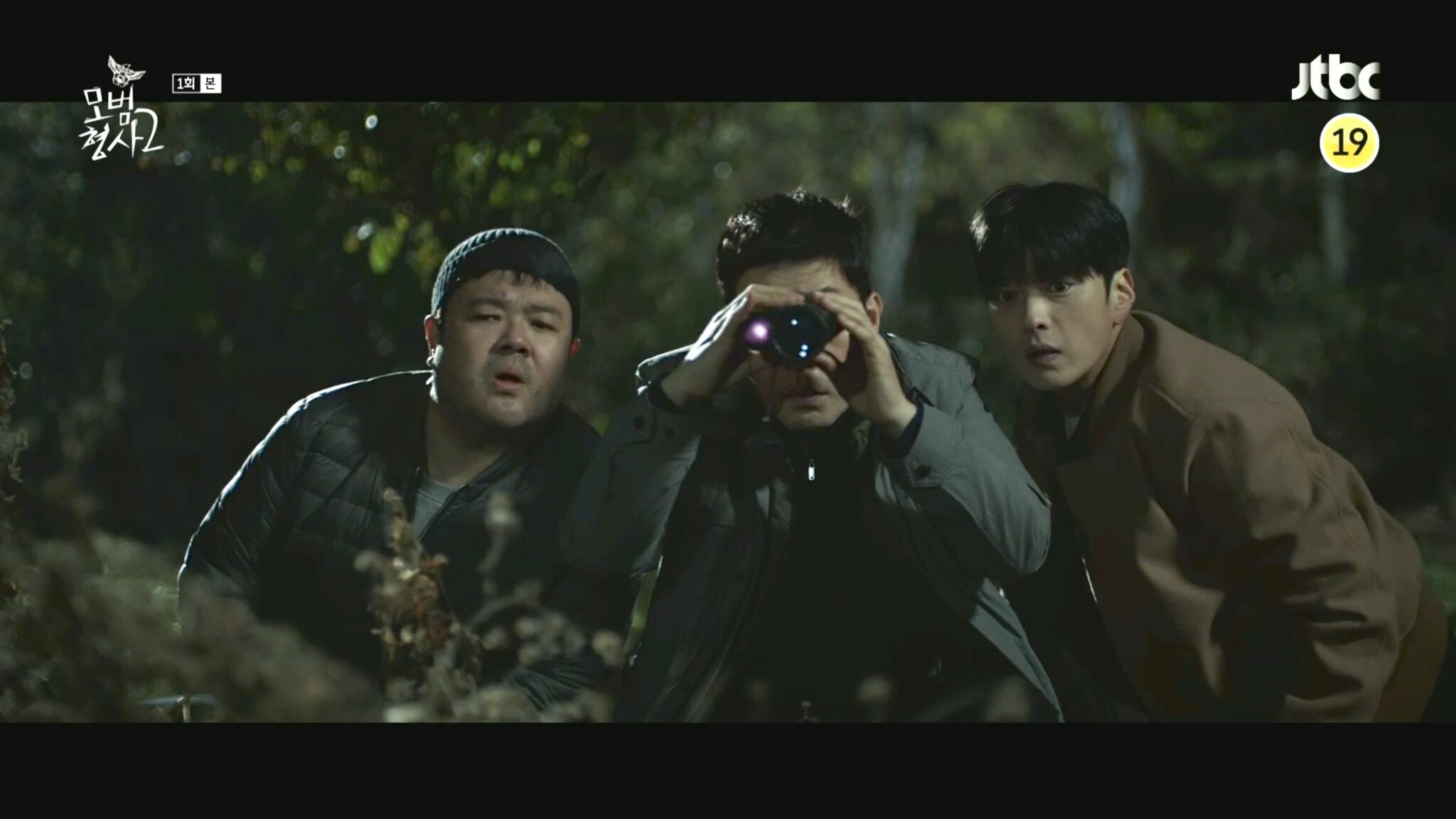 Two years later. A news report about the White Dress serial murders catches Ji-hyuk’s attention, but his partner KANG DO-CHANG (Sohn Hyun-joo) isn’t keen on applying for the Seoul investigative team with him.

Do-chang would rather stay in Incheon and focus on the ginseng thief they’re currently staking out, but that goes awry when the team ends up being chased by a wild boar instead. LOL, the CGI isn’t great, but their panicked escape is downright hilarious.

As they flee, Ji-hyuk manages to nab the ginseng thief, pinning him to the ground — but he’s so fixated on his successful catch that he doesn’t notice a bloody corpse several feet away, clad in a white dress. Shivers. 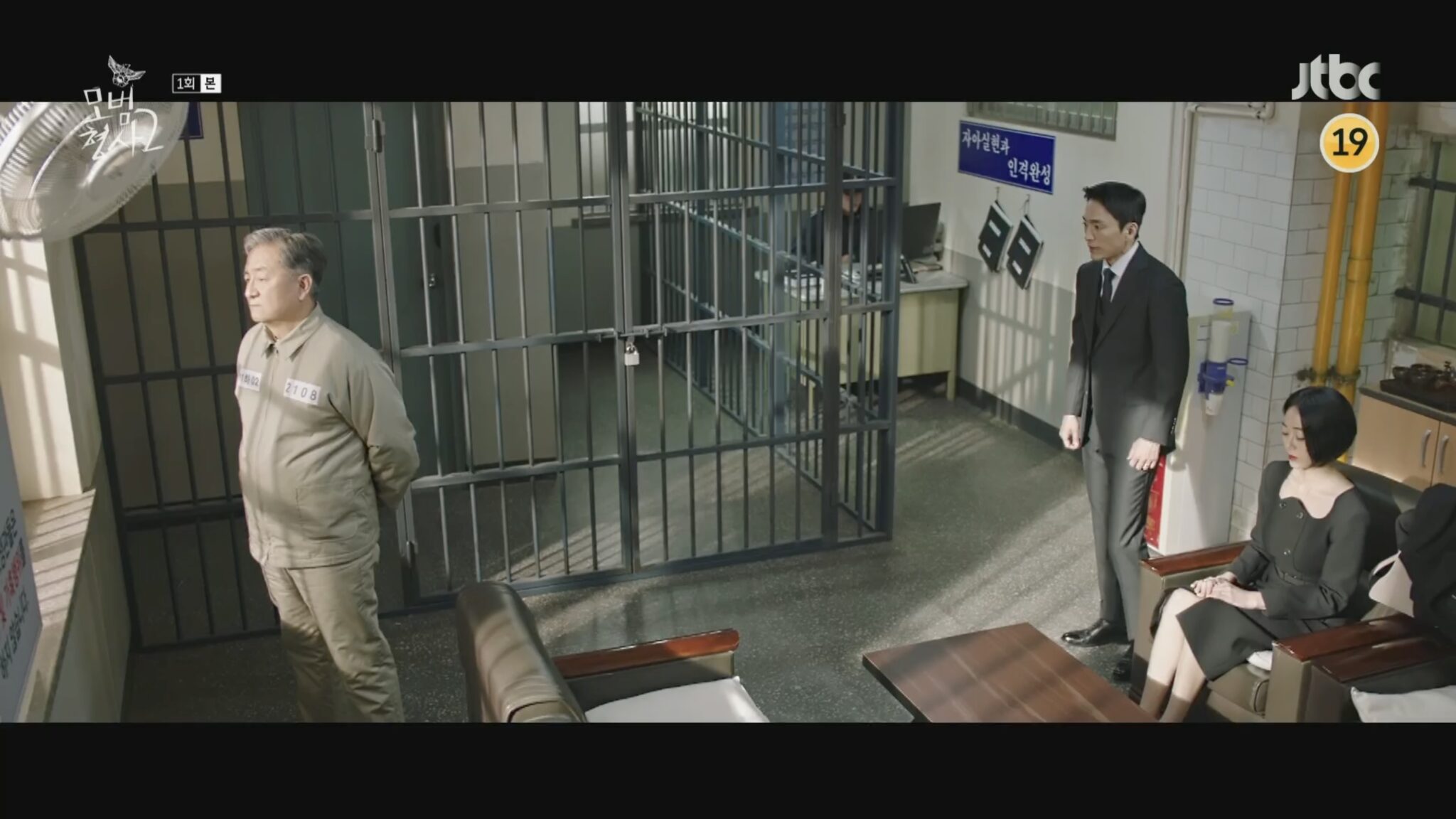 To make matters worse, the latest murder victim turns out to be an employee of TJ Group’s legal team. Interestingly, Tae-ho doesn’t know about her death until he hears about it from a subordinate. 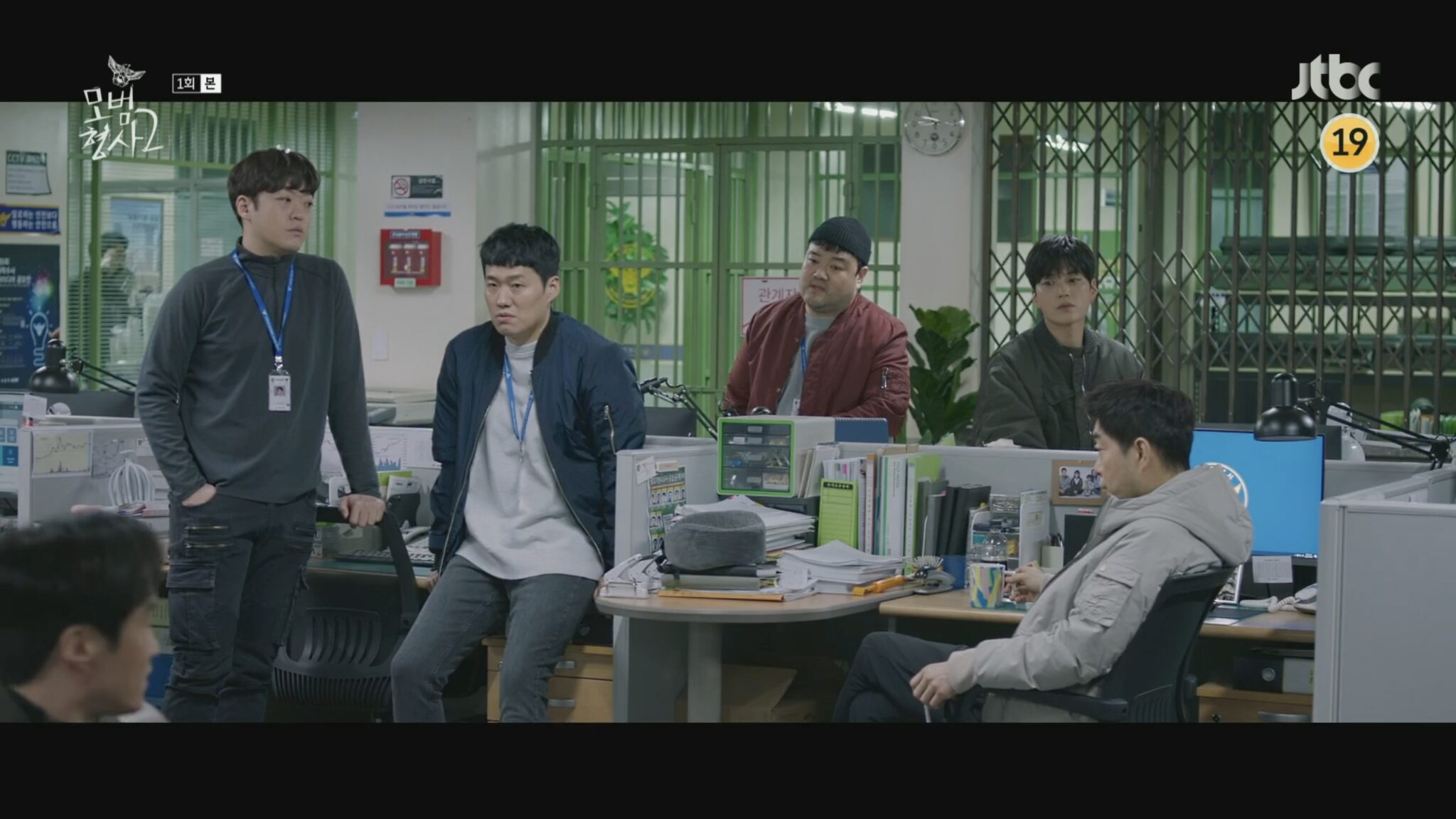 Though it’s been three months since the serial murders began, the special investigative team still hasn’t made much headway in cracking the case. Still, that doesn’t stop team leader JANG KI-JIN (Lee Joong-ok) from looking down on the Incheon regional police.

Each team is determined to catch the culprit and claim the honor for themselves, which means they’re not above getting in each other’s way. So when both teams end up having to (grudgingly) work together, there’s lots of friction, bickering, and hilarious attempts to one-up each other, ha. 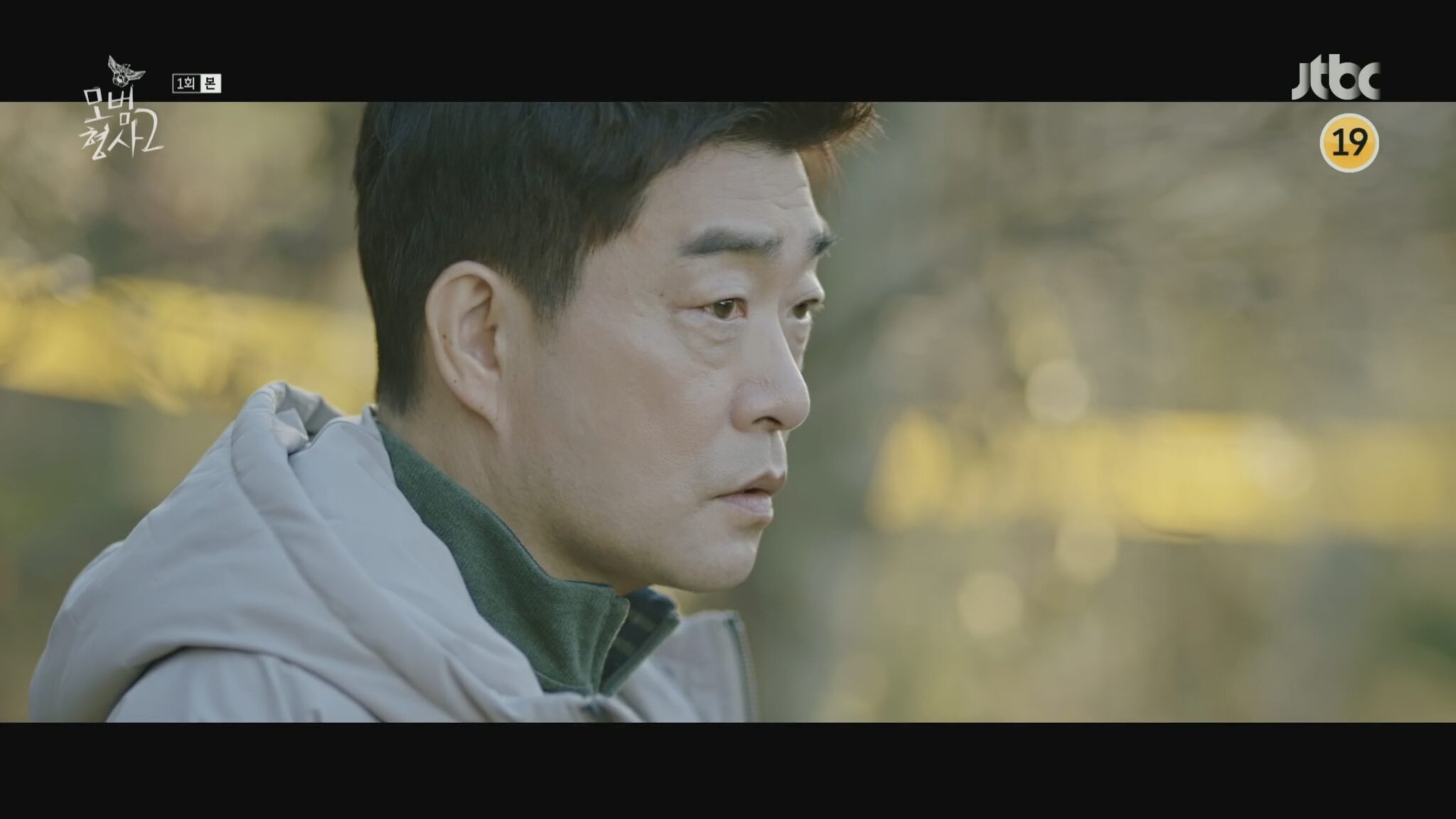 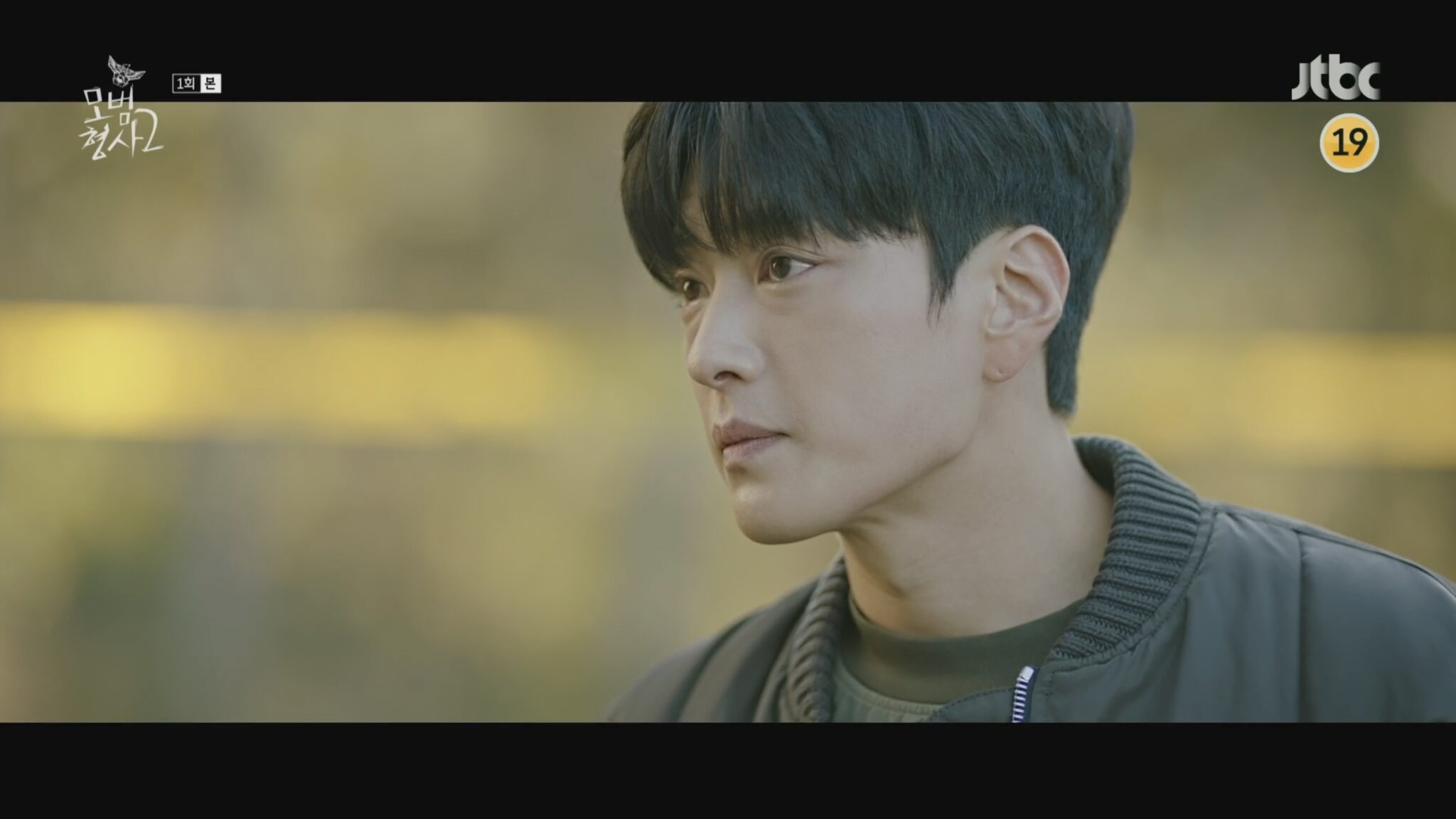 Suspicion falls on ginseng thief KIM HYUNG-BOK (Kim Gyu-baek), since he was the only other person known to be on the mountain that night. However, Ji-hyuk realizes that the killer’s characteristics don’t align with Hyung-bok’s — there’s no way a killer that meticulous would have run so close to his crime scene, even if the fiercest wild boar was chasing him.

Ji-hyuk’s hunch turns out to be right; some sleuthing reveals that Hyung-bok is guilty of insurance fraud, which is likely why he’s on the run from the authorities. The more they learn about Hyung-bok, the more he doesn’t seem capable of murder, despite all the circumstancial evidence that points to him. 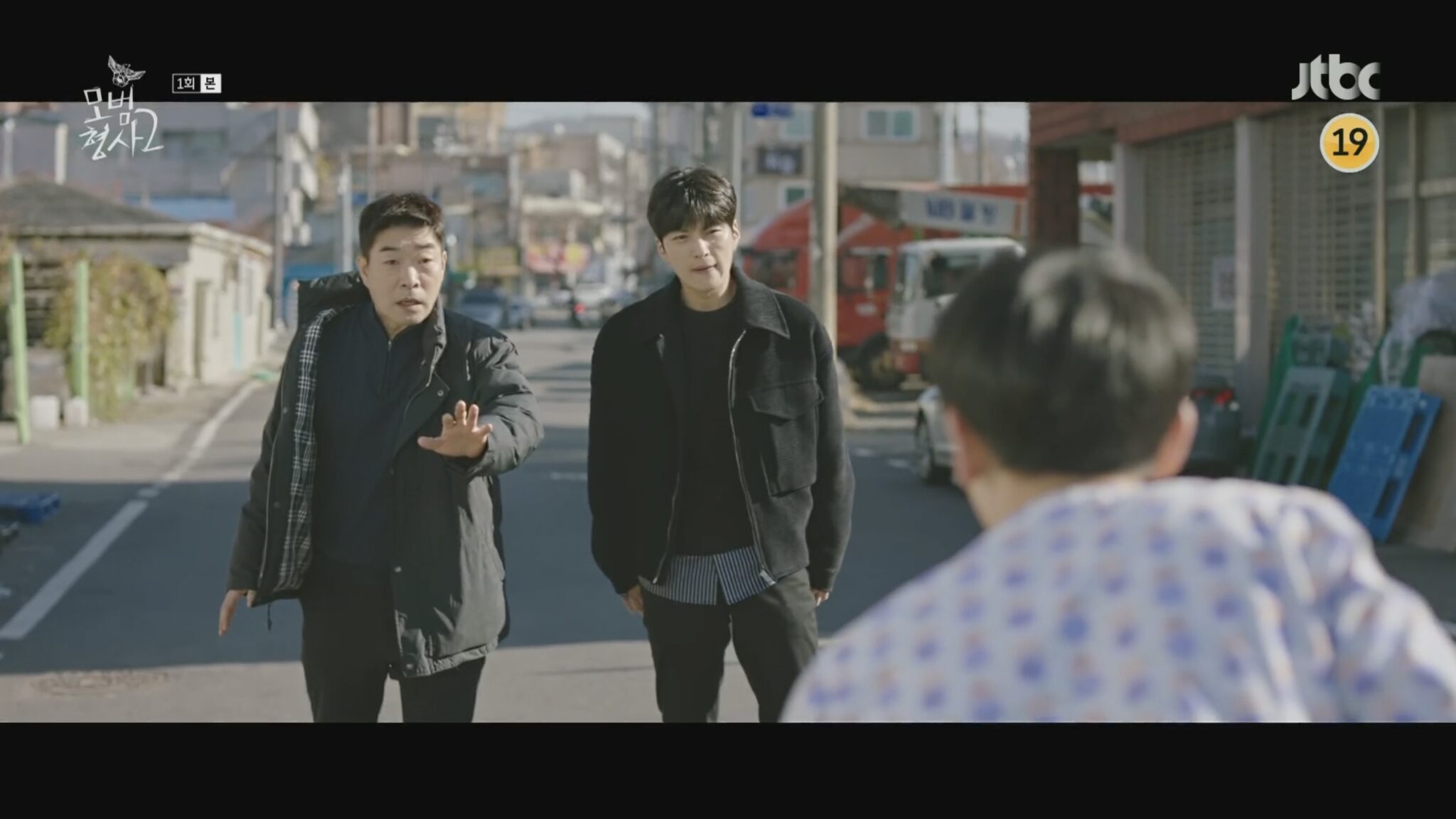 Our protagonist pair finally manage to track down Hyung-bok when he’s hospitalized following a motorcycle accident, and a chaotic pursuit through the hospital ensues.

They end up chasing him all the way out to the streets, yelling that they aren’t trying to arrest him for insurance fraud (or ginseng stealing, for that matter). Of course, Hyung-bok doesn’t believe them one bit, and he turns to take off again — only for a Truck of Doom to ram straight into him. 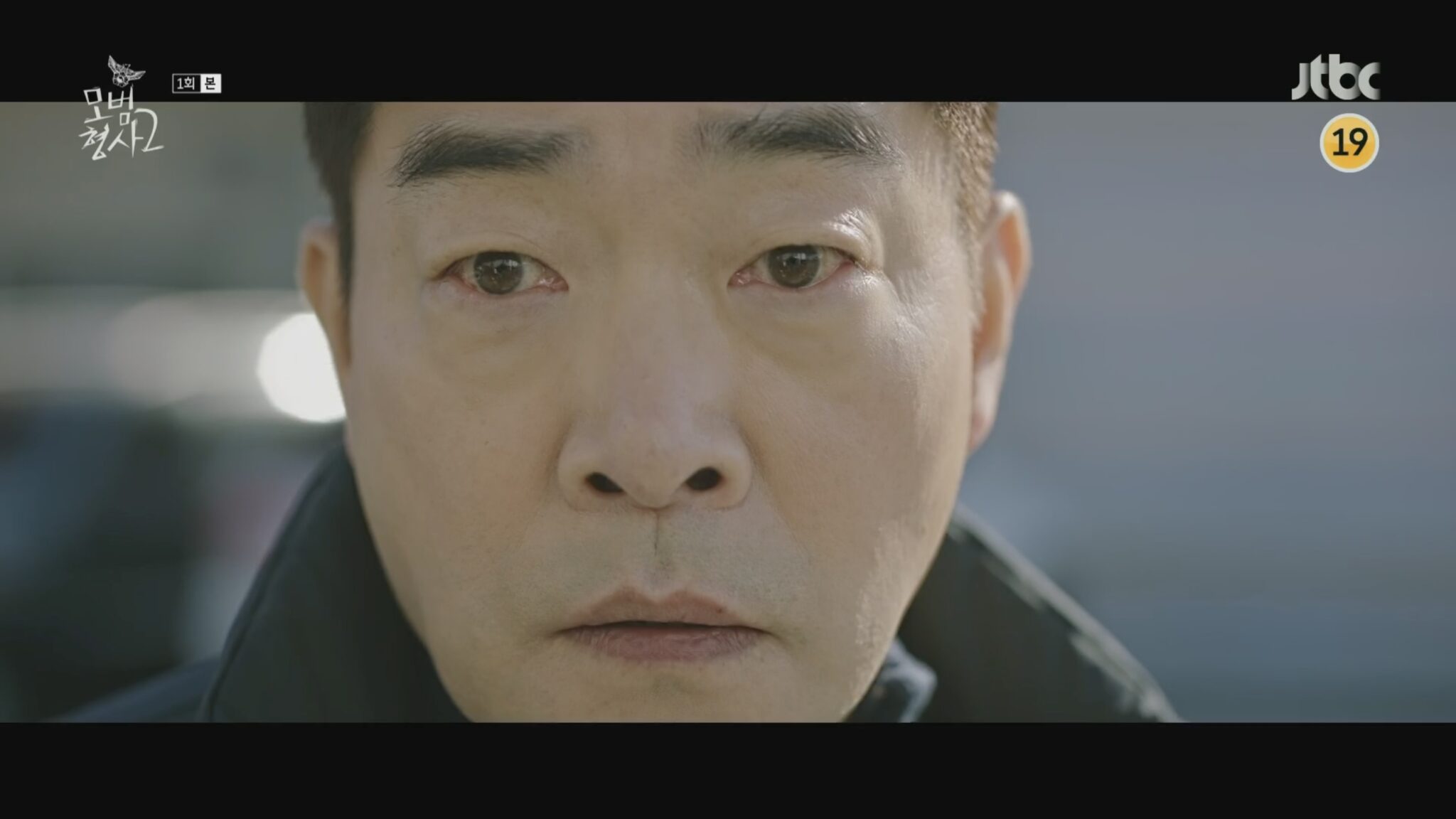 Oof, the look in Do-chang’s eyes. He seems utterly shaken by Hyung-bok’s abrupt death (or accident, if he survives). It’s clear he’s been having doubts about his profession, unlike Ji-hyuk, who’s still staunchly determined to chase down culprits and uncover the truth. Do-chang’s nightmares of being chased down as a killer reveal his deepest fear — if he arrests the wrong suspect, he’s essentially condemning an innocent person.

It’s interesting how the same worry affects our protagonists in such different ways; while it makes Do-chang waver, it instead strengthens Ji-hyuk’s resolve to work even harder so that the true criminals are put behind bars. 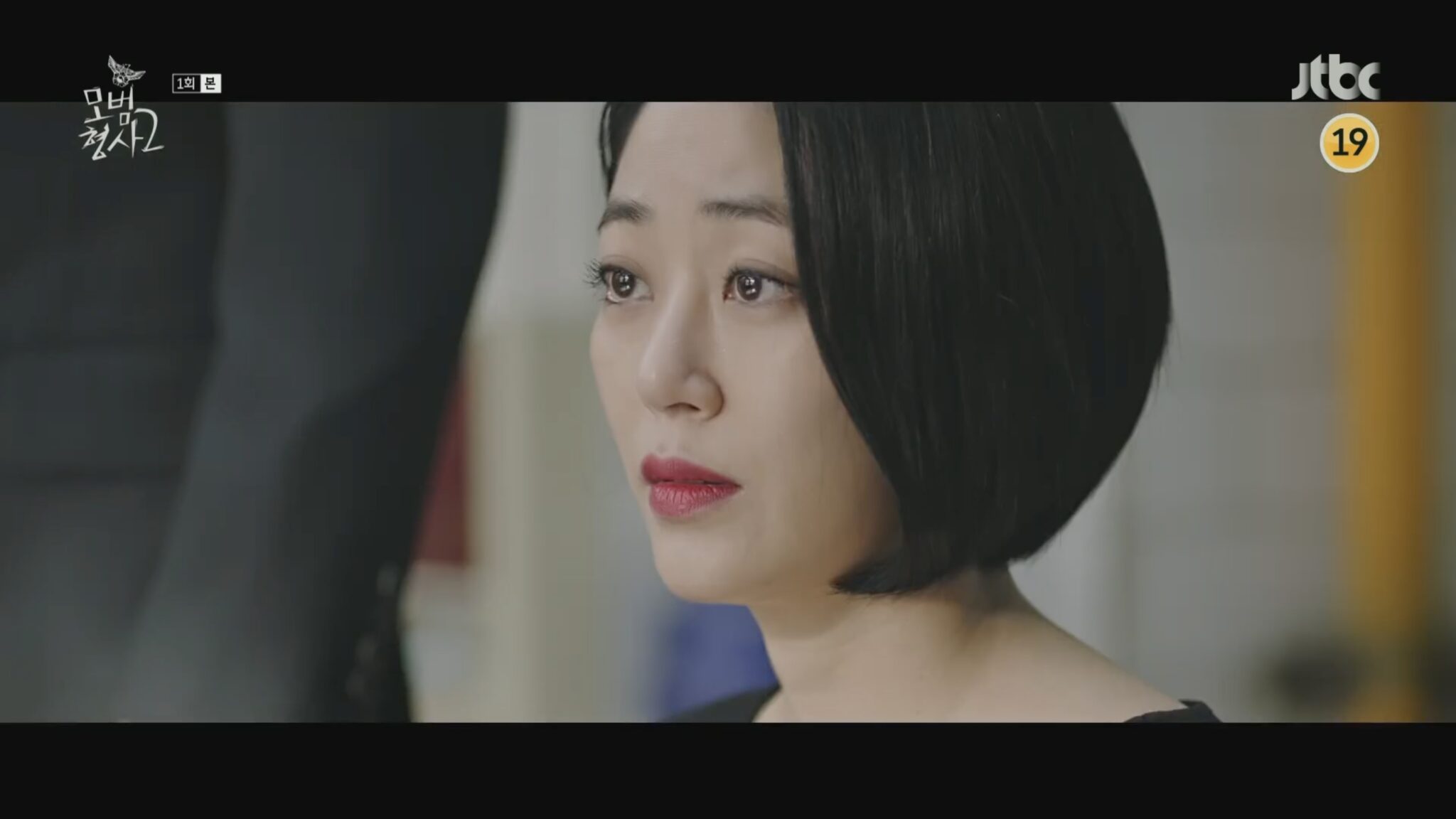 Admittedly, I haven’t watched the show’s first season, so I’m probably missing out on some context and character development — though the first season is definitely on my to-watch list, given how much I enjoyed this premiere.

This first case doesn’t seem particularly novel or complex on the surface, but I’m very much intrigued by the central characters, who all seem to be hiding many layers beneath an unassuming facade. Tae-ho’s wife CHEON NA-NA (Kim Hyo-jin) is one of them; even though she didn’t have much to do in this episode, the way the camera lingers on her seems to suggest that there’s more lurking beneath her placid gaze. 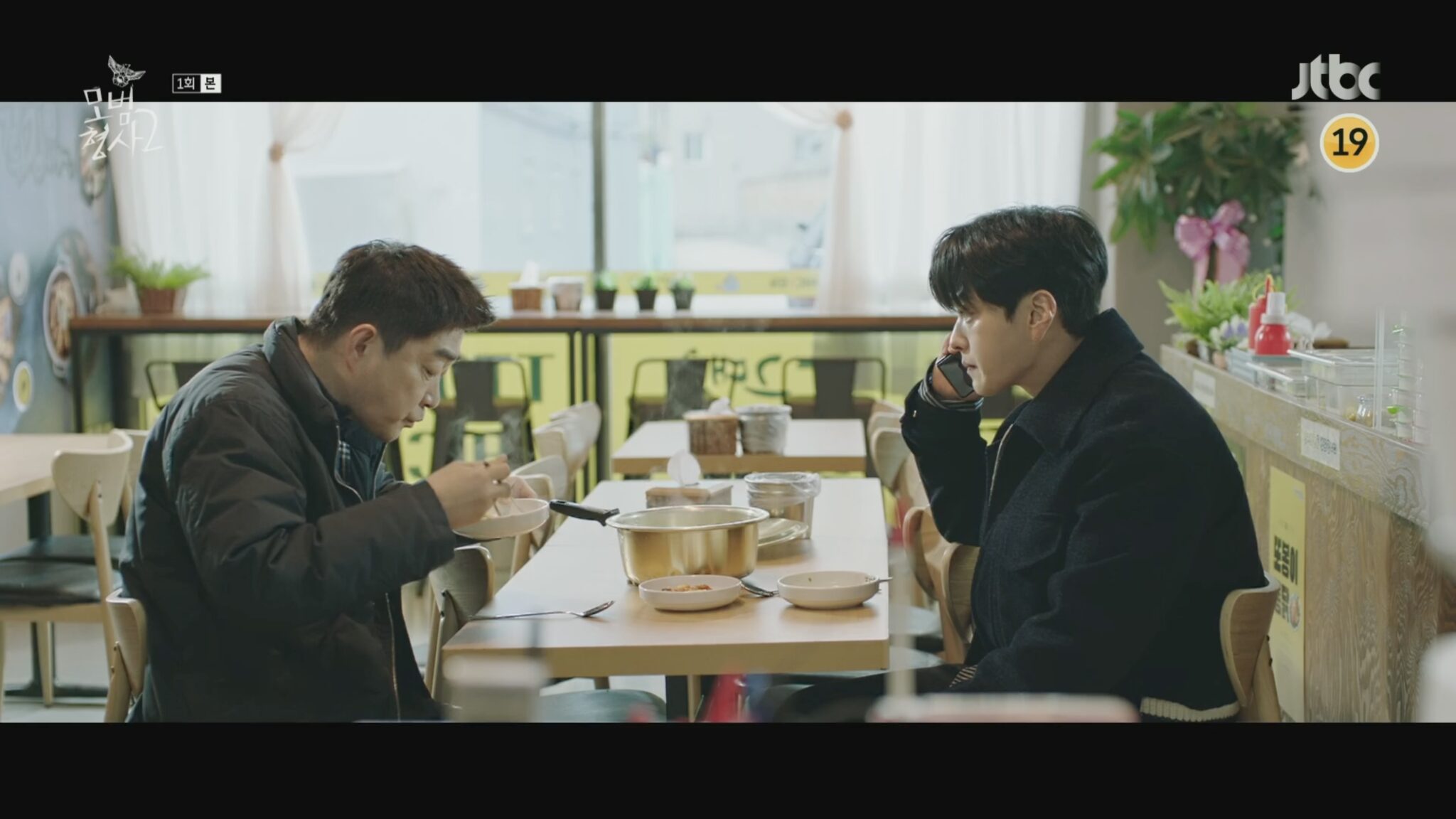 Sang-woo is a fascinating character, too; his brutal violence is awful and I don’t condone it one bit, but his incongruous response in the aftermath has me curious. Given how aggressive he was, I’d expected him to be smug and unrepentant, but his vacant daze seemed to suggest that he may have been unnerved by his own actions.

I’m sure it’s no coincidence that the woman he injured was also wearing a white dress, which makes me wonder what happened during the two-year time skip. I can’t wait to learn more about what makes Sang-woo tick — having just watched Choi Dae-hoon in Insider, where I was absolutely impressed by his nuanced acting, I’m excited to see him portray another layered and morally gray character. We gotta have a suitably competent baddie for our good detectives, right? 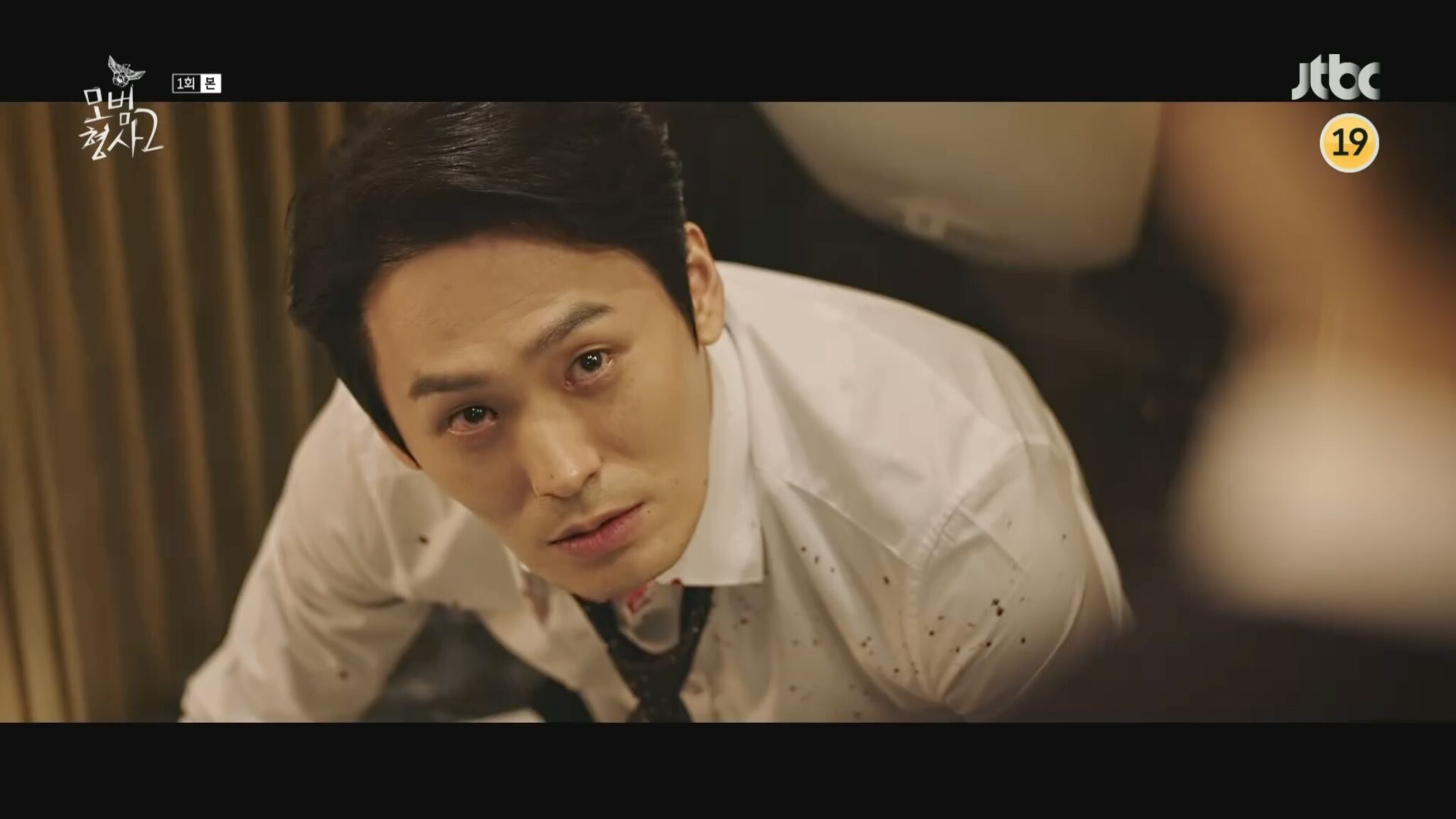 One of the best things about season 1 is that every victim is portrayed as an individual in their own right (including the disgusting cop-turned-pastor). While I enjoyed all the manoeuvring around the case in this season 2 opener, I wasn't keen on how the serial killing aspect reduced all the victims to "women in white dresses". Perhaps we will find out more about each victim in later eps.

On the plus side, it's wonderful to see Kang Do-chang and his team again. I love how their dopeyness doesn't stop them from doing their job well or being kind to the people who have the misfortune to get involved in crime. Their two bosses are adorable too!

please tell me this is on a streaming platform? or are you watching with out subs/or sailing the high seas?

I watched the one with the iffy subs on the dodgy streaming site...

desperate times calls for desperate measures, time for me to do the same too

I've had my laptop screwed up too many times by dodgy sites. Frustrating that so many dramas are not on main sites (and Disney+ is not a main site if it doesn't air kdramas to US).

How many serial killers can a country the size of ROK have, for crying out loud. Put the serial killer on the trash heap of drama history, please!

Oof, anyone know a good site that’s streaming this? One I watched, the translation was rooooough at best (random quirk was they switched all the genders, hyung was sis, and so on). I really enjoyed the first season, and I’m hoping to watch this one as well.

Not sure I agree about Sang-woo though, he certainly seemed unrepentant just sitting there casually greeting Tae-ho as he appeared.

Also…*sigh* truck of doom already? Must be millions waiting to be made for the first to invent something to see both ways on a road in Korea, like necks or…slightly shifting hips. All joking aside, it’s not a trope I’m fond of, and really smacks of the writers not having something better to remove a piece from the board.

Not keen on the truck of doom either, but here I think it serves a particular narrative purpose. The death of Kim Hyung-bok is going to put Do-chang and his team in a very tricky position. On the one hand they will probably be credited with catching the killer and hence have one up on the Seoul team. On the other hand, even though they suspect that the killer is still out there, their own supposed "success" will be an obstacle to any further investigation.

Another possible consequence is that no one other than Do-chang and co (and the poor old mother) will care whether Kim Hyung-bok was really guilty. Compare this to season 1, where the stakes were very high for the falsely accused man, an all-round good guy and father. In contrast, KHB is a shifty small-time criminal without any obvious redeeming qualities, and - more importantly - he is already dead. I think this case will partly be about how even someone like KHB deserves justice.

Another thing about the truck of doom here is that a public that is happy to accept KHB as the killer might see it as a Truck of RIghteous Vengeance instead, e.g. "serves him right for trying to escape". Basically, everything is conspiring to make the poor guy look as bad and as undeserving as possible, including the truck that he ran in front of in his reckless attempt to flee the cops.

No one has any legal platform to watch this and sites that have this drama appareny seem to have bad translations, so I wonder if there are enough beanies who want this coverage. Personally, I do not perfer reading recaps before watching the episode.

I am glad the team is back together, but they don't mention Lee Elijah's character at all.

Noticed that, I'm hoping they work her in once the story becomes bigger. I'll be disappointed if she isn't in it at all.

Jung Moon sung was absolutely chilling throughout the entire episode.

He said few words but holy moly, you know you need to look out for him.

It's nice to see these characters back. I like the team!

I love The Good Detective's tone and pacing and that continues here. Considering the swathe of crime dramas that have frenetic introductions of a billion characters, Good Detective's even and almost sparse tone really works for me, as it did with the first season.

Tbh I was quite ambivalent about there being a second season at all, especially since the show was structured strongly around the original case and its themes of corruption, redemption, and finding the line you refuse to cross. I didn't see how the show could do that here and I'm still not entirely sure.

But - boar attack, Truck of Doom and terrible darkside subs notwithstanding - I'm certainly willing to give it at try.