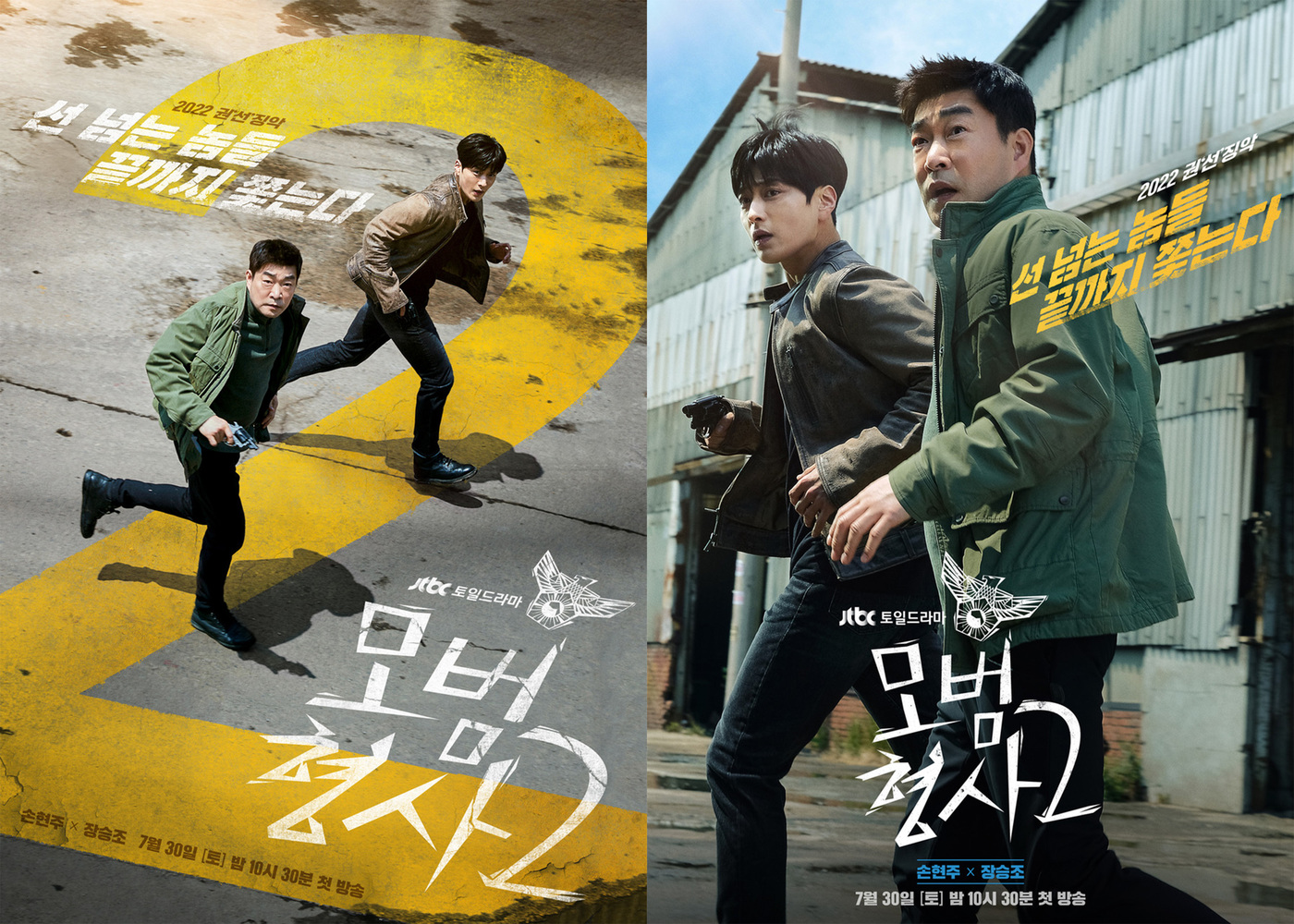 JTBC’s The Good Detective 2 has been putting out its last round of promos and we’ve got some new posters as well as a video teaser to tide us over until next week’s premiere.

Reprising their roles from season 1, our beloved buddy cop duo is back with Sohn Hyun-joo (Tracer) as Detective Kang Do-chang and Jang Seung-jo (Snowdrop) as Detective Oh Ji-hyuk. A new serial killer case sets off season 2 and the two are ready to kick some more criminal butts, aided of course by their trusty police squad.

But there’s trouble brewing from a shady chaebol family as well, fueled by inheritance squabbles between legitimate son Choi Dae-hoon (Insider) and his half-sister Kim Hyo-jin (Human Disqualification) – along with her lawyer husband Jung Moon-sung (The Veil).

The new teaser opens with a news report on the serial killer and how public discontent is growing over how the investigations are being handled. As we watch the faceless criminal still at large, the sequence of appearing text reads: “2022, good triumphs over evil. People who cross the line will be chased down until the end.” The police, of course, are trying their best and Kim Hyo-jin asks why they’re so fixated on this case. Detective Oh replies that once he decides on something, he sees it through to the end and Detective Kang agrees that they’re willing to do whatever it takes.

While the police team continue their investigations, we hear the sinister Choi Dae-hoon realize, “You’ve been holding a knife behind the back of my head this whole time.” In the meantime, Kim Hyo-jin decides to put her trust in Detective Oh, who is convinced that, “The truth needs to be uncovered. The truth that has been concealed.” The teaser then closes on a dorky but fun boy band shot, as the police team head out together and whip out their batons in choreographed unison.

A serial killer who targets woman, seriously? Season 1 was so interesting because it wasn’t that, with all the varied cases and the cold case from the past. I’m very tired of the killer who targets young woman trope. It makes me frustrated to see woman seen as victims constantly, and simultaneously the contrasting problem that apparently pretty woman are the only ones who’s death will elicit our sympathy. Also, it’s been done so much that I’m bored of it. I really enjoyed season 1, so I’ll probably still watch it. However, my expectations have just gone down a lot.

I agree with you on the dependence upon violence against women in entertainment--not only in S.Korea. Sadly, because I enjoy our Good Detective team.

Choi Daehoon is in this too? Love him in Insider, enjoying his cameos in Extraordinary Lawyer, really liked him in Do You Like Brahms and first saw him and llloved him in Lawless Lawyer. Now he's with my favorite ensemble cast? \^0^/

I’ve seen him in different roles previously but I’m blown away by his performance as the tormented best friend of the main lead in Beyond Evil. That is an award worthy performance and carrying weight no less than the two leads. Now a forever fan of Choi Daehoon.

YES he was a standout in Beyond Evil.

The serial killer sounds a little cliche, but I hope they can at least put their own spin on it. I’m definitely looking forward to this as I was happy to see the two leads NOT be villains in a kdrama, and they were both super likeable in their roles.

I wonder if the sister and his faux daughter will be back as well, as I loved their weird family dynamic.

I hope to see our Eun-hye back too! She became one of my favorite characters and loved journey of that made-family.

I loved season 1, so I am excited for season 2, but disappointed they are going the serial killer route.

Disappointing that they’re with the serial killer who targets young women route. That’s incredibly overdone and most PDs tend to make the whole routine uncomfortably fetishized and/or sexualized in a way that’s extremely inappropriate. That said, I’m still watching this season because I enjoyed the first one, but suffice to say, I have lowered my expectations somewhat.