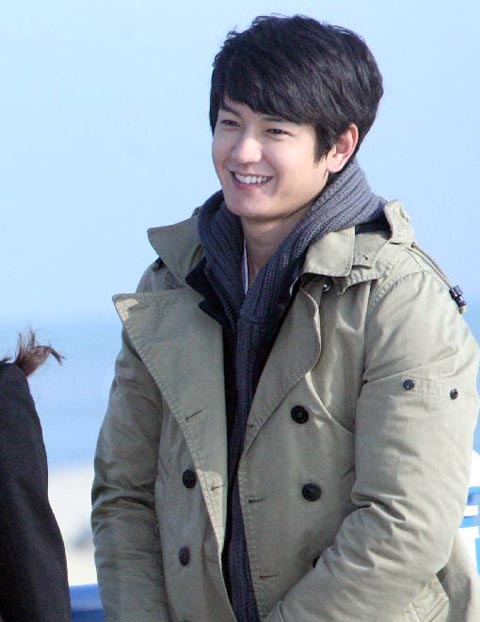 If you’ll recall, there’s a short (two-episode) special drama starring Im Joo-hwan that is set to air soon, which will precede his full-length drama role in the upcoming What’s Up. It had previously been titled Hyunhaetan Marriage War, where “Hyunhaetan” refers to the strait between Korea and Japan and is a metaphor for the plot that has a Korean man (Im) marrying a Japanese woman (Rie). The drama is set to air over the weekend, but now has a new name: Marriage War of Doenjang-kun and Natto-chan. Doenjang is the Korean word for fermented bean paste, while natto is a similar Japanese type of bean paste (they’re not exactly the same food, but the analogy is clear).

Im Joo-hwan said, “It’s a great honor to participate in a drama with such meaning, with which I can greet both Korean and Japanese fans at the same time.” He plays a bright and cheerful character, in contrast to the curt Park Kyu of his breakout role, last year’s Tamra the Island. He also had to speak in the saturi dialect (his character is from Busan, in the south), which he found awkward at first but was helped along by the director and older actors on set.

The drama is a romantic comedy that is described as a sweet love story that is both “warm and enjoyable,” and will air on February 27 and 28 on MBC. What’s Up, meanwhile, will air later this summer.

This has made my day. Thank you, JB.

The ICOMYM Club will be very pleased! We've been missing him like crazy. Look at that million-dollar smile! Im Joo-hwan reminds me of Jung Il-woo in the way his smile transforms his whole face.

Its our baby boy Im Joo-hwan! He's such a cutie pie, and total acting heavy weight to me after his Tamra turn.

Can't wait for his projects this year!

I saw the trailer and everyone is hyper in it and I don't like hyper Juhwan, but it looks fun overall.

Torrent is up on soompi, courtesy of cute girl. Hope WithS2 can sub this. Please JB and hjkomo, can you put it a word. Thanks :-)

Hey you are so fancy
just can't keep my eyes off you
U are the best actor
I love you.....

My,my,my. Ju Hwan's smile can melt our hearts. Thw world seems to be a nicer place when he smile :)