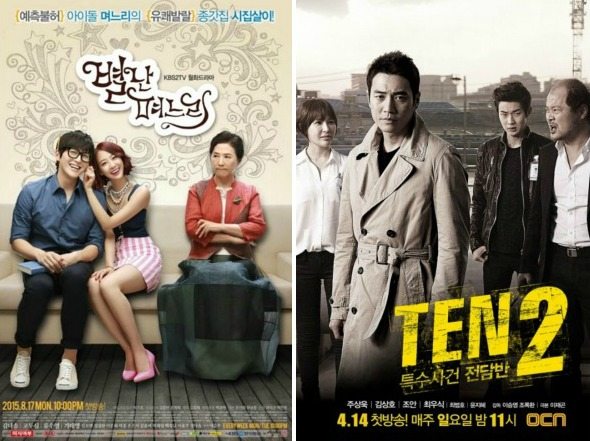 Is the reign of legal dramas finally over? Dramaland tends to strongly follow trends so we can get a long spell of a specific genre, and I wonder if the sci-fi time-bendy dramas are making a comeback with upcoming dramas like SBS’s Reunited Worlds and tvN’s Circle.

KBS has announced their follow-up drama to upcoming Seven Day Queen, titled Manhole: Wonderland’s Feel. I know, the title sounds weird to me too. But I’m pretty sure it’s a pun on the main character’s name, Bong-pil, and the Korean pronunciation of “feel.” In any case, this time-slip drama centers around Bong-pil and his five friends who travel between the past and present through a manhole in order to stop a wedding scheduled a week later. This sounds a lot like Operation Proposal to me, but it’s described as a youth comedy, which… *cue sighs of relief*. I can’t do that to myself again.

Directing is PD Park Man-young, whose credits largely include dailies and weekend dramas like Sweet Secret and Strange Daughter-in-Law, although he did direct miniseries The Vineyard Man starring Yoon Eun-hye waaayy back in 2006. I am much more excited to hear that writer Lee Jae-gon will be handling the script because, if memory serves, he did a pretty solid job on Special Affairs Team TEN, which was a hit for OCN at the time. I can trust he will bring the bendy in time-bendy, and give us a fun, comedic sci-fi ride.

They haven’t announced any casting offers, so beanies, start preparing sacrifices and saying prayers for your dream cast. Manhole: Wonderland’s Feel is set to begin its run on August 9 on KBS in their Wednesday-Thursday slot, following Mystery Queen and Seven Day Queen.

I didn't get the meaning of writer's statement "but it’s described as a youth comedy, which… *cue sighs of relief*. I can’t do that to myself again."

it's becuz Operation Proposal was a "wah-wah fest"... required lots of tissues...
; )

I actually loved Operation Proposal. That was the first drama where Yoo SeungHo became the lead actor..

I dunno why..when I read the friends part, my mind played Reply 1988 montage! ^^

Hahaha!
Actually, this could apply to all Reply series..err..Imagine every 2nd lead trying to get the girl! Ha!

I would help him

Manhole is a very weird title indeed. And I cant help think of other things, er..with that title xD. I laugh at "youth comedy" cuz i feel like this will be angsty as heck.

I liked Operation Proposal when I saw it in my early days of watching kdramas. But now that I look back, those 16 hours with Yoo Seung Ho yelling that chant again and again seem tedious. It was fun tho because it felt like a story of a second lead trying to be the first lead lol.

I strongly recommend a name change to this series. That name starts badly enough and ends with an OMG.

Maybe he falls down a manhole and that's where the time-bendy stuff happens?

Where can I find switch to blog view option?

it should be on the top right-hand side of the page, just before the little magnifying glass and "login/register" link. (i actually haven't used this site on mobile since the switch so can't give directions for that).

It's only available on desktop. As far as I know, I've never seen that option for mobile view.

TEN is literally the only OCN show that I like. I have nothing but goodwill for the writer. Anticipating this positively.

The reign of legal dramas is coming to a close - BEHOLD THE NEW REIGN OF THE TIME-SLIP DRAMAS.

But but... I like legal dramas :( The well-written ones, that is. Whisper has enough loopholes to fill a manhole.

I miss my straight-up rom coms where there's nothing legal or murder or sci-fi involved...it feels like ages since we had a good one.

Funny I was just thinking the same thing the other day.

Me too! I'm a sucker for friends-to-lover dramas..

I do too. I want something ordinary yet special like Weightlifting Fairy, with a good plot and a coming-of-age story. Just something grounded in reality. I remember watching Chae-rim's early dramas Dal-ja's Spring, about how she hired the guy to be her pretend boyfriend, and they fell in love, and her other drama, "We're Dating", which was even more mundane, about falling in love with the boy-next-door. Jang nara's Wedding was also so simple about marrying a guy who didn't love her, and him slowly falling for her. I love these dramas, they were so simple, yet so memorable.

Exactly those! Weighlifting Fairy was a gem because it's just the kind of pick-me-up drama that I love to watch on mundane days. And I also miss good dramas like Coffee Prince and My Name is Kim Sam Soon. I hope the mix-genre trend died soon, and they would go back to one-genre kinda show.

Kim Sam Soon!!!! Yesss! I remember I loved that show. Top 3 on my list! The humor, the quirkiness, the acting, the chemistry, the hot kisses - the perfect rom-com, with that great ending!

Yeah I think that's the last drama where I saw Chae Rim and even Lee Minki.. It's been ages seen I saw them in the small screen.

This !
Dramaland tends to follow unknow trends. I don't why writers suddenly write the same kind of things. It's a pity for viewers who don't want to watch the same show on 3 or 5 channels.
I hope dramaland would be more diversified :
- real rom-com, melo, fusion sageuk, sc-fi, legal, thrillers, sageuk, ..... !
But I think may is coming with many different things, too much for my little free time TT

I started watching MY SECRET ROMANCE because I got such a kick out of Sung Hoon in FIVE CHILDREN. So far, it's been fun.

I've needed something light and at times goofy after a long string of intense dramas (OH HAE-YOUNG AGAIN; BEAUTIFUL MIND; ROMANTIC TEACHER, DOCTOR KIM; VOICE) with multiple time lines (GOBLIN; BLUE SEA; TOMORROW WITH YOU; SAIMDANG) and sageuks (MOON LOVERS; MOONLIGHT; REBEL). It's nice to take a break from history, medicine, politics, psychology, literary references, allegory, etc., and turn off my brain. For me, every once in a while, eye candy is good. Light, fluffy, no-thinking-required eye candy is even better.

Man 2 Man is awesome fun, @pakalanapikake come join us as we gush over the charming agent!

Thanks, YY! I hadn't planned to watch this one for some reason, but just saw the first episode, and loved it. If it keeps up the wacky style of this first installment, I'll enjoy it a lot. ;-)

The potential title "Manhole" really got me laughing so hard. Ok, so now anything in Korea could possibly transport you to the a different time or a different world. We have had typewriter, tunnel and now manhole. I would not be surprised if there would be more to come in the form of fitting room, cabinet or what more only god knows.

Well to add to the list, we also had incense sticks, walkie talkie and the legendary gummy-fetus.

Okay... Please explain the gummy fetus to me...

Also known as "brain fetus," it sent a certain physician back to Joseon, and that's all I'm going to say. I'm afraid I might become the target of compostable produce if type its name out loud. ;-)

The recaps were hilarious...I read every recap and laughed until I cried...@headsno2 was brilliant, she captured all the screencaps with his bug eyes in different shots.

Now I'm gonna go and reread all the Dr Jin recaps once more. Those are some legendary recaps ever graced the Beanieland.

What the heck. If it hadn't been for watching DR. JIN on Hulu as my first Kdrama, I wouldn't be having this conversation here on DramaBeans.

Besides, Lee Beom-Soo made a very favorable impression as the king, and that got me interested in sageuk.

Will have to check out the recaps.

LOL I don't watch Dr Jin but I waited for @headsno2's recaps every week. I think some of us back then were more excited about the recap more than the drama.

The trash bin - he empties the trash and gets sucked in when he bends over; he comes back the same way after he time travels.

Think of all the shower scenes a time portal through the garbage could necessitate. Perfect for personal care PPL without the sandwiches.

In that case, I'm going to suggest Hand Towel for the role then,as the Trash-y Time Traveler and I'd suggest a name change to When A Man Stinks.

I just thought about alice in wonderland when i read the title..

Maybe they have to use manholes because there's too much concrete in Seoul for rabbit holes. Let's just hope it's utility access tunnels like in BUFFY, and not sanitary sewers (ew!).

Geez, I just had a flashback to THE HONEYMOONERS. Art Carney played the only character I ever recall seeing who was a sewer worker.

like with a lion, witch, and wardrobe thing? lol

Please get a new title for the drama. I can't take it seriously XD

I kinda excited when read
"Bong-pil and his five friends who travel between the past and present..." "...described as a youth comedy..."
I Hope casting didn't disappoint, I want awesome chemistry between the friends. And I hope aspect of time slip will be fascinating, isn't confusing to watch.

Same here. I like a good, intense time-travel drama but I think I'd love to see one lighter youth comedy that won't give us headache when we watch it.

Looks like the time-travel trend is back. I remember that it was a trend in 2012, if I am not wrong.

But I am such a sucker for time-travel and sci-fi genres :') I only hope that they will change the title or something, haha, 'Manhole' is just.... xD

The title made me laugh so hard. I keep thinking of a manhole that feels like Wonderland...his name is Bong-pil...rhymes with pill...and that made me think of even stranger things LOLOL

Time to cool down for 1-2 years with timeslipping? =P

'yeah dude tunnels and walkie-talkies are overrated, I'll just be jumping into a literal shithole and time traveling from there'

Manhole ? The name invokes an image of "Dirty Jobs" with Mike Rowe.

You're right about MANHOLE and DIRTY JOBS. LOL!

Then again, IRL the virtually-extinct phone booth -- when you can find one nowadays -- often has the same kind of "aura." I'd hate to be Clark Kent.

A century later...still hopelessly waiting for another season of TEN :')

"so beanies, start preparing sacrifices and saying prayers for your dream cast" I love your writing humor! Hmm, if I didn't read what the drama plot is about just by the drama tittle I would of skipped the whole thing.. but depending of the cast I may give it a shot. Thanks!

Is it just me or does the title "Manhole" coupled with "Wonderland Feel" just seem rather ... pervy? LOL, am I the only one?

Crossing my fingers on this. BTW, this is from the same production company behind Tomorrow with You (which also has a time-slip theme) and

(cont.) Age of Youth. Well, I hope they get the right actors.