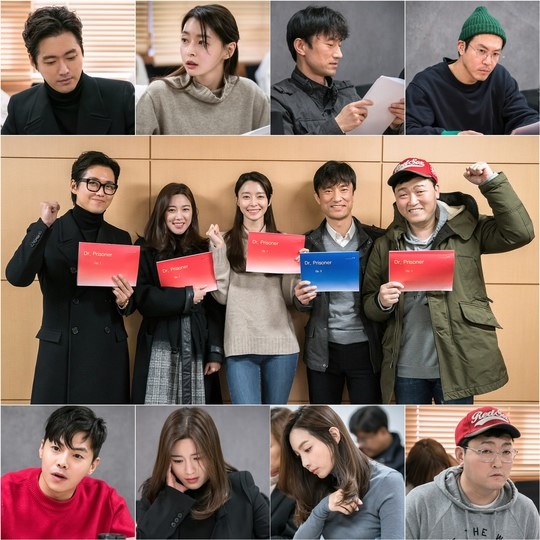 Now, this is a cast I can get excited for. KBS is busy preparing for upcoming prison-medical drama Doctor Prisoner, and the production team behind the show has just released pictures of the cast at their first script reading back in January. Namgoong Min (Handsome Guy and Jung-eum) has characteristically chosen to genre-jump once again from leading rom-com hero to a darker role in a suspense thriller.

Namgoong Min will play a talented surgeon who was once a rising star at a large hospital, who somehow ends up at the medical unit of a prison. His character arc sounds rather dark, and reports call him an “angel” who turns into the “devil,” which is pretty in line with the equally dark description of the show’s plot: Doctor Prisoner will be about those who use medical knowledge and genius intellect to eliminate the cancerous elements of society.

Although Namgoong Min by himself is a draw on its own, I’m doubly excited to see the latest It ajusshis Kim Byung-chul and Choi Won-young reunite in a show so soon after their JTBC mega-hit SKY Castle. Kim Byung-chul will play a formidable opponent to Namgoong Min, at least at the beginning of the show, as the head of the prison’s medical unit. Choi Won-young, on the other hand, plays a second-generation chaebol who is the most likely candidate to inherit the top position of his family’s conglomerate. I’m not sure how he figures into the main story that takes place in the prison, but I’m looking forward to finding out.

Other members of the supporting cast include Kwon Nara (Your Honor), Lee Da-in (Come Here and Hug Me), Park Eun-suk (Investigation Couple), Lee Min-young (Your Househelper), Lee Joon-hyuk (Reach of Sincerity), and Jang Hyun-sung (Dance Sports Girls). PD Hwang In-hyuk, whose credits include Laurel Tree Tailors and Assembly, will be directing, and Park Kye-ok will be penning the script. Writer Park has been curiously absent from the industry, his last project in either dramaland or Chungmuro being 2014’s Age of Feeling.

Doctor Prisoner will premiere on KBS’s Wednesday-Thursday slot on March 20.

The cast is exciting and a prison-medical drama combines two fantastic genres if done right. Looking forward to this one!

This show reminds me of Cross, except that we had a more personal revenge going on in there whereas in here we’re most likely having a more generic revenge against them elites story. The comparison isn’t exactly flattering since that show struggled with the real-life scandal of the veteran male lead (oh boy let’s hope it won’t happen here too).

Also, I’m not exactly hopeful for this drama since we all know how Age of Feeling turned out in the writing department (hint: it wasn’t good). While Namgoong Min is a solid actor, he isn’t quite at the level where he can elevate a lousy script (see his last drama).

I certainly won’t be anticipating this show when it airs, unless it starts getting SKY Castle level of reviews. I do admit I’m interested in the synopsis: even though medical turns me off, a good revenge will turn me on. (Case in point: I’m still watching An Empress’s Dignity despite the makjang)

Right AGE OF FEELING is not a drama to be proud off. I still remember those prayer circles lol.

i love namgoong min! so happy to have him back on my screen! this will be good if done right!

Excited to see NGM play a different character, one with a dark side.

The plot seems interesting! And I'd love to see again Kwon Nara, I liked her in Suspicious partner.

The premise doesn't do a lot for me, but I will probably watch an Ep or two just to see this fabulous cast in action.