Jang Geun-seok takes the lead in You’re My Pet 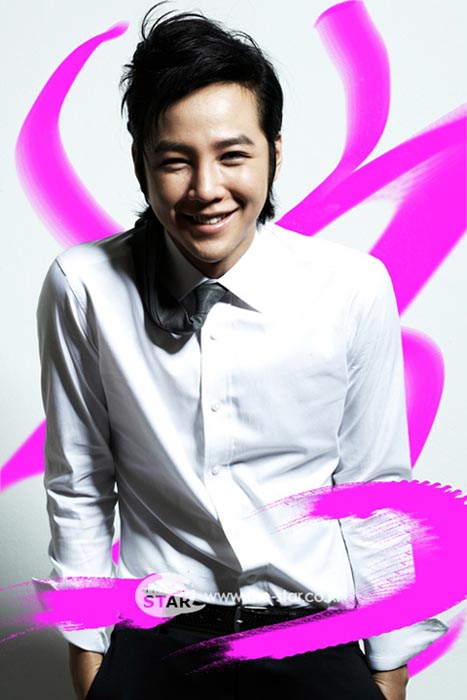 Only one news outlet is reporting this, but Jang Geun-seok has reportedly been finalized as the lead in the Korean movie version of You’re My Pet, a remake of Japanese drama Kimi wa petto. The movie had gone through an earlier casting round and selected Kim Hyun-joong as the cute “pet” to a fashion-editor careerwoman, a role that was once rumored to be Su Ae‘s.

According to Star News, Jang has decided on the role and is currently finalizing the details. An A-list actress (yet-unnamed) is the top contender for the female lead, and once the rest of the casting is made official, the movie will begin filming.

This ought to be interesting — back when Kim Hyun-joong was supposedly headlining, I had been turned off because his acting is SO inadequate that it even got in the way of my finding him physically attractive; in Boys Before Flowers, my annoyance with the acting spilled over into annoyance with the character. But Jang Geun-seok is not only pretty, he’s got comic chops as well as dramatic ones. Plus, there’s the fun trivia tidbit of Jang taking over this role from Kim considering that he had initially wanted to play the Ji-hoo role in Boys Before Flowers (which, of course, eventually went to Kim).

(The source article says Jang’s casting is a done deal, but until I see other outlets reporting this news, I’m not fully convinced this is final. For what it’s worth.)

Now this casting is much better than the other dude. I was pissed to hear he had originally gotten it especailly because I liked the Japanese version so much and he would hardly do it justice. But with JGS, he's a big guy compared to Matsujun as kind of fragile and a dancer. I wonder how that will work? What will his talent be?

Would love to see a JGS/HJW reunion. This would be SO that project!!

While I can't totally seeing him as the submissive pet (So many rebellious roles...) he does seem like the type of person wild and a bit rebellious enough that would be a human pet and not care what the world thinks. Though... I'm not sure how his dancing is...

The thing that disappoints is that Sumire will be a fashion-editor, which doesn't exactly fit with the "top career woman" kinda thing... If they changed that, will Momo still be a dancer? I hope they don't change that to something else....

Please, please, please let this be true! I'm so excited that my fangirling nearly deafened my husband.

This is a really good fit for him. I am pretty excited. Except for maybe the dancing part. Let's change that to something else...

i screamed when i saw this headline - SCREAMED!!!

this is amazing - yeah - they totally would have gotten it right if he's playing the "pet" - he has the charm of matsumoto jun - OMGOOODNEEESSSSSSS!

how is it that you can make my day twice!!! first with the personal taste novel, and now this!!!

Hmmm....very interesting indeed. JGS is versatile and talented....am very curious as to how he will pull this role off after You're Beautiful. Am also curious who will be the female paired with him! :-)

This is great news!!!

OMG.. i love Soo Ae and JKS. It would be better if its a drama not just a movie.

please tell me this is true!!! it was YB that made me fall for him hard last year, and now... Kimi wa Pet is one show that I really love Matsu Jun... he'll have a high standard to overcome but im confident he'll do very well in this role!!!

something to expect from JGS while he's busy touring Asia!!! WoHoo!!

JKS now that is much better casting, I think he can definitely pull off the part of Momo. Yay!!!!

Kimi wa Petto is one of my favorite j-doramas. JSG is a way better choice than KHJ. However, I really hope they don't really make Sumire a fashion editor.

and of course now it won't let me edit my typos....smacks keyboard....

After watching him in Hong Gil Dong, Beethoven's Virus and YAB, JGS has the experience to fit the 'pet' role well.

Besides, he already has a fashion sense and wardrobe that fits the character, as played by Jun Matsumoto. (I wonder if they have the same stylist... hmmm.)

No,..... that role only belong to MatsuJun. He had put that drama at a par. Hope that JGS can do it.

He can be my pet anytime.

But if Sooae gets this role it will be a dream come true for JGS since I heard he has the biggest crush on her.

Awesome. I love that picture....he just looks to cute.

His smile in the pic alone makes me squeel like crazy hahaha!

I love Kimi wa Petto, but originally was turned off when I heard the rumor about KHJ casting. But now, my interest just shoot up! And to think the already adorable JGS is going to be an adorable pet...

omg! JGS oppa! it's good for you that you have a new movie.. hmm really looking forward to see you again in the big screen.. haizz..

This is turning out to be a great year for upcoming kdramas! Hope they can find a good actress to fill out the leading female role. Go JGS!!!

i'm totally ready to fall for jang geun seok again! so, let it be true ^o^

So. Excited. At this point, I don't even care who the lead is. I'm going to watch it no matter what.

I read that JGS was initially casted for the role of Goo Jun Pyo in BOF and not Ji Hoo? Regardless, I'm looking forward to seeing JGS in this movie! Love him!

Yaaaaaaa he's going to do a amazing job he is a really good actor I've seen the japanese version (the main guy in it is amazing ) so I hope he can do the same and make this movie great.

I had a smile on my face as soon as I read the header. Now please, please, please x1000 let this be true. I can see JGS in the role MatsuJun did so well. I just wonder who the lead lady will be since she is technically the lead so it would be boring if they didn't get someone good.

So psyched! I hope the female lead is Su Ae but if we can't get her... would this role be too similar to Park Jin-hee's role in "Woman Who Still..."? Cuz she's one of my favorite actresses.

Who are other actresses you'd like to see w/ JGS, Javabeans?

don't freak me out....Ha Ji-won would be too awesome!

Matsumoto Jun was a such an adorable tramp, so emo and so very wild, Jang's totally perfect for the K-version.

Man! This year's dramas are just too overwhelmingly good, this is bad, at this rate I won't have a life and every night I'll be sat in my pjs engrossed in kdrama.

@28,
Jang Geun-seok was offered the Jun-pyo role, but he wanted the Ji-hoo role. Producers wanted Kim Hyun-joong because he looks the part of Rui, so Jang Geun-seok opted against BBF entirely.

I hope they don't make the female lead character a fashion editor. If they do so, it would remove an important component of the Sumire character's personality.

Sumire was an international 'ace' news reporter on serious subjects. She very ably covered wars and riots, not fashion. And, that's the dichotomy in the character. She is so good in her professional life, yet, such a basket-case in her personal life.

But wow, fingers crossed this is TRUE! Or really, anyone else gets casted as Momo other than Hyun Joong, and I'll be one happy jan. Hyun Joong is pretty, but god, the woodenness.

This should be really interesting considering how the male character from kimi wa petto is a complete 180 degrees from Hwang Tae Kyung.

Im SO glad.
I hope this is for real because I adore Jang Geun-seok...
(if he were in BBF, I would have been so mad when he didnt get the girl.)

i'm not Jang Geun-seok fan but thankfully this role is going to him instead of Hyun-joong (nothing against him too it's just that he got to learn more about acting before he got a lead role and an important one like this).

after reading this news i'm actually looking forward to watch the Korean version, now they just need to call Su Ae for the other lead role and i'm all set :D

This makes me feel really warm and fuzzy and sparkly inside. :D

Wouldn´t it be lovely if Kim Sun Ah plays the female lead?

Really, really, JGS turned down Gu Jun Pyo even though that is a guaranteed "sucess" role for any actor? Hm, my respect for JGS as an artist has just gone up one estimation. Though I would like to see how the Gu Jun Pyo character would have turned out with JGS.

how awesome! At this point, I just need to see JGS on my laptop screen again, because we all well know he can pull ANYTHING off...And what a great picture you chose, javabeans, I hadn't had a meltdown at that smile for days! Thanks!

@45:
Tell me about it! Even his stubbornness is awesome! What bothers me is that these Korean stars are all young! I mean if this was Hollywood I could convince myself I would become someone great when I was forty but dammnit JGS, I still won't ever be as talented a 23 year old as you are!! grrr!

i can totally see him in that part! hopefully it's true :)

Matsumoto Jun was adorable as Momo in "Kimi wa Pet." I hope Jang Geun-seok can pull it off. I love his acting so far. This is definitely good news.

yayyy! this is exciting indeeedddd

I LOVEEEEEEEE JGS I can't wait to see this !!!! he wil blow us away I'm pretty sure.....this will be interesting to see how his acting is ivolving and maturing by taking different roles......I love it.......KHJ is not actor but a singer and I wasn't conviced he can't have done justice to the role.....BUTTTTT JGS is a ACTOR and he will be incredible....JGS keep up romacing the NOONAS cause I LOVE U and I'm sure A NOONA.......OMG I"M SOOOOO HAPPY!!!!!!...