Juni added to I Am Legend 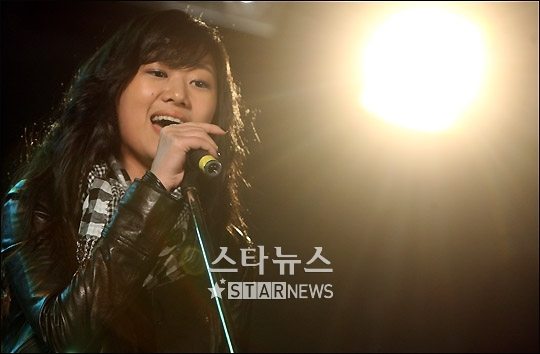 Actress Juni of IRIS and Beethoven Virus has been added to the cast of I Am Legend, the SBS drama starring Kim Sun-ah as an ajumma turned rock singer. The drama also has cast Jang Shin-young as the band’s drummer and manager, and now Juni will become another of the band’s members.

Juni’s a bit younger than the others at age 25, so she wouldn’t be considered an ajumma rocker, but in all other respects she seems a perfect fit for the part. As the singer of rock band Bella Mafia (listen below), Juni has strong vocals and experience performing, and was also its guitarist. On the acting front, she has a few drama roles under her belt, for which she earned generally favorable responses.

I Am Legend tells the story of a rock band composed of women who use the music to overcome their personal pains, and plans to air at the end of May.

Tags: I Am Legend, Juni

I can't wait for this one. I love these dramas about ajummas and women in general who are independent and.... I just know I'm going to like this drama. Let's hope I don't get screwed over for hoping too much.

I remember her as the flutist in BV. Didn't know she was actually a singer.

Hong Ji Min 홍지민 (On Air; The City Hall)
Is also one of the cast, she is Madam Jung in City hall, I read that she is an opera singer?
I hope there are only 4 members in this band, cause those 4 women is enough to rock my world, they are beautiful, sexy, talented and I`m sure hilarious.
The question is, who will be the husband and love interest of KSA in this drama, I`m thinking may be the men will be just a decoration to this drama, that's why they announced first the lead actresses. I hope not, cause they will play an interesting role with KSA character. I`m very much interested to see romantic scene in this drama.
I think KSA being single and available makes me wanna pair her with such good looking men. She cannot do kissing scene when she got married.
Oh please SBS, reveal the lead actors in this drama ASAP!

OOh. I LOVE HER. And it's great that they put an experienced performer who's also in a band...

WOAH. It's a good year for dramas eh?

Very interesting choice!! I am so looking forward to this drama!!

I literally had no idea she was in Bella Mafia.
I totally have their songs! I remember thinking she had a nice voice in IRIS too.

Nice. I liked her in BV.. she's a talented actor and singer.

May I ask... is she a hapa of some sort? Part Korean, part something else?

i'm so excited! :) it's awesome that they got a real musician...

im really excited for this one. kim sun ah as a rock star? oh yeah, bring it!
can't wait for the summer!! when i can finally catch up on some dramas, and watch this new one too!
wondering who the male lead could be..can i do some wishful thinking and hope for hyun binnie?

Glad to hear that Juni will be back on a drama... I only saw her in Beethoven Virus but god I loved her relationship with the abuji... :)

I'm so excited for this!!! I wonder who the male lead will be...? I think I would die of happiness if Joo Jin Mo did a drama with KSA *hinthintSBS* =]

yes - gotta agree with everyone above!! i think this is a great addition - and if she is the only non-ajumma she'll probably be that young one they hire because they need one more person.

(i think jang geun suk did something similar in a past movie - Happy Life? - where he was the only young one in a band of ajusshi's reliving their glory days - but he was like, the son of a former member?? something like that...)

never saw Beethoven Virus but I know her of course from the film Sky and Sea with Jang Nara, think she got a supporting actress nomination for that role?, not sure now. So that will be three music related productions for her in a row.