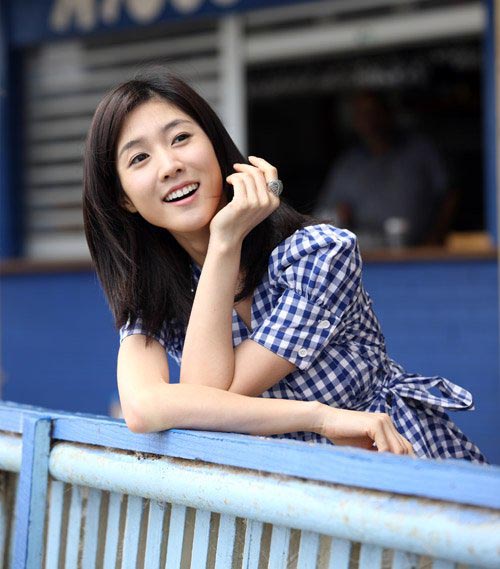 The drama to follow KBS’s Birth of the Rich is romantic-comedy series My Country Calls [국가가 부른다], which has cast Lee Soo-kyung as its lead actress. She will play a bold and unpredictable character, in stark contrast with her most recent role in weekend drama Loving You a Thousand Times.

Lee plays a lowly policewoman who treats her job purely as a source of income and lacks a sense of duty. She meets an elite intelligence agent, played by Kim Sang-kyung (Great King Sejong and Lawyers) and starts to investigate him. They clash at every turn, but naturally end up falling for each other. According to Lee, her character will be “like a 21st-century Shim Chung and Candy.” (Shim Chung is the filial daughter of folklore who sacrificed herself to save her father, while Candy is the manhwa heroine who has inspired so many drama cliches of the poor but plucky girl who works hard and eventually meets her Prince Charming.)

Despite that description (I’m tired of the Candy heroine, frankly), I’ll look forward to this project, as it has been building a bit of buzz as the winner in KBS’s 2009 open scriptwriting contest. The drama’s writers are Choi Yi-rang (Tamra the Island) and Lee Jin-mae (I Am Sam), and directing is PD Kim Jung-kyu (Immortal Lee Soon-shin, I Am Sam). Also cast is Lee Soo-kyung’s Loving You a Thousand Times co-star Ryu Jin.

A civil servant feeling a lack of duty...It reminds me of Prosecutor Princess. The first episode was decent, but it just went downhill on the second. I generally like Lee Soo-kyung, though, so I might give MCC a try.

Um....Is it just me or does that sound alot like Sweet Spy?

Very interesting....I liked her in Soulmate. Will check out her newest role.

Meh. Why does she have to meet an elite agent? Can't she just find a normal guy who works hard and inspired her? It's like becoming a rule for there to be a chaebol/rich/elite character in EVERY drama. I know there's a lot of wealthy people in the world... but.... it's tooo much sometimes... And the "bickering but will fall in love" tires me out.

I adore both leads... but the only thing keeping me interested is that tidbit of info you gave about the contest (I hope the script is good), so I have a little hope it might be better than I'm expecting it to be.

I couldn't bring myself to watch her in LYaTT, as it was one of those draggy weekend dramas, but I do like this actress.
I agree with momosan, I instantly thought back to My Sweet Spy too. Where the second male lead Lee Ju-hyeon looked scarily like Bruce Lee.

I totally agree with you Javabeans. I've been tired of the Candy heroine for a while now. A good script can make cliches fun and enjoyable, but the same old archetypes become quite predictable and sometimes downright boring.

@ 5 Biscuit - I typically enjoy the chemistry of characters who follow the "Mr. Darcy and Elizabeth" theme, but seriously, there are other ways the main leads can meet and interact. I agree, why do so many of the drama male leads have to be rich/elite? And why is that guy almost always a jerk? Perhaps it is for the same reason the heroine is often very attractive and cheerful. I just wish there was a little more willingness to stray from the typical drama cliches.

Fortunately, Cinderella's Sister is a breath of fresh air (so far). It's nice to see a sweet working boy falling for a cynical, tough yet vulnerable heroine.

I love her, although I completely skipped her recent melodrama, for the same reasons you did JB :)

This looks predictable, and I too am tired of the Candy-esque heroine.... but I might watch it since it got a scriptwriting award - because when done well, cliches can hit all the right notes.

Kim Sang-kyung is the lead actor? :(

Same as all of the comments above, I thought this drama was going to be one of the cliche ones. I began watching it only because I really liked Lee Soo Kyung in Soulmates and I wanted to see her finally in a romantic-comedy role instead of her usual melodrama ones.

And the result was nothing short of fantastic! I haven't enjoyed a romcom in so long, and this one was definitely one of the most addicting, hilarious ones I've encountered in a long while! I love all the characters in here, and I love how the pacing is; and I've already finished through episode 12. Still not draggy yet, which is awesome :)

I've grew to like both male leads and love Lee Soo Kyung's facial expressions/gestures in each episode, really nice drama... I hope javabeans will have a chance to pick this drama up and review it sometime :D