It’s here! The teaser poster for My Sassy Girl 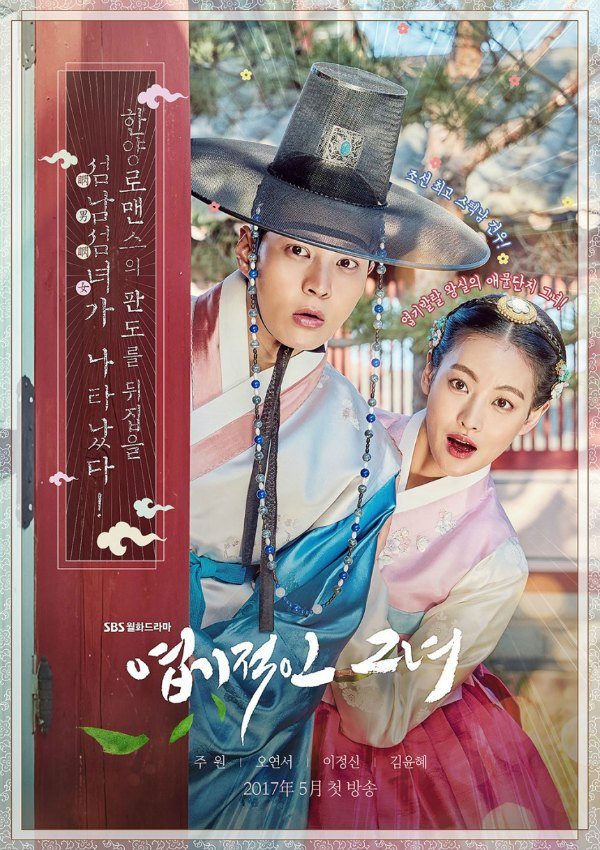 This poster is one year in the making, literally. Happily, it doesn’t disappoint because I love it! My Sassy Girl, starring Joo-won (Yong-pal) and Oh Yeon-seo (Come Back, Ajusshi) is a lovey-dovey remake of the 2001 rom-com movie that starred Cha Tae-hyun and Jeon Ji-hyun. A big change in this story is that it is set in Joseon and will have a bit of strife within the royal court thrown into the mix.

In the center of the drama is Joo-won, who plays the role of Gyun-woo, the most eligible nobleman in the Joseon Dynasty. Not only is he the most attractive man in Joseon, he is also teacher to the crown prince. Oh Yeon-seo plays quirky, lively, and of course sassy Princess Hye-myung who is the headache of the royal palace. Additional characters include Lee Jung-shin (Cinderella and the Four Knights) who plays Kang Jun-young, a charismatic general in the Inspection Department and Kim Yoon-hye (Vampire Detective) who plays Jung Da-yeon, a woman who loves Joo-won.

Besides being amazingly gorgeous, the poster features a cute little pun, introducing our two leads as seon-nam seon-nyeo, for a good looking young couple, but written as “some-man” and “some-woman” instead to highlight their romancey “some” kind of relationship.

The complete writing in the box reads: “Some-man and some-woman who will change the romance game in Hanyang are here!” On the top of Joo-won’s hat it reads: “Gyun-woo, the man with the best specs in Joseon!” and above Oh Yeon-seo it reads: “A bright, sassy woman who is the headache of the royal palace!”

My Sassy Girl is 100-percent pre-produced, with the hopes of airing simultaneously in China and Japan. Unfortunately, the actors got pulled into some pre-production strife between the network and the production while casting for the leading role, but I’m going to try and tune that out. All the pre-production mess aside, there is already a lot of interest in this show, because it’s Joo-won’s last drama before army enlistment. Hopefully it will be a good one for him. Joo-won fighting!

SBS’s My Sassy Girl will broadcast Mondays and Tuesdays in May following Whisper. 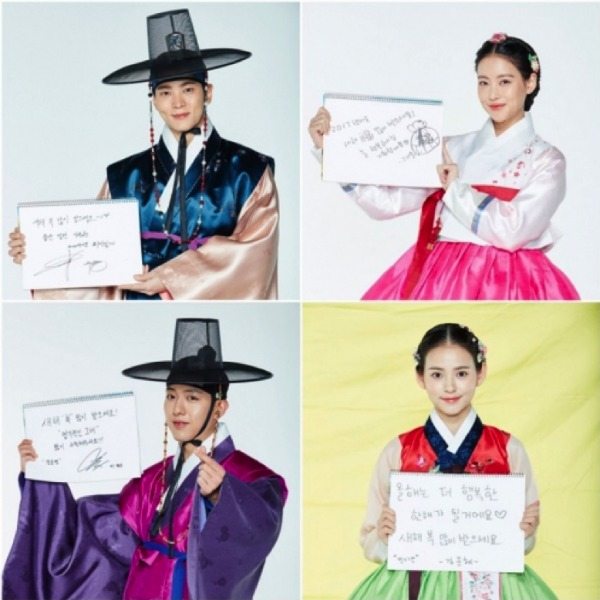 Hope this drama will be a good one!
Alsot, the Hanboks they are wearing in the main poster are really pretty!!

Yes, my eyes totally went to the Hanboks. So pretty!

Everything looks so prettyyyy. So if even it sucks, at least we can count on all the pretty costumes. Also Joo Won.

Please be as good as the hanbok.

I am cautiously optimistic. Still not exactly sure how you stretch a movie into 16 episodes. Especially one with a really simple plot. I mean, in the movie the heroine doesn't even get a name. Maybe they are just going to use the idea of Type A girl meets Type B boy and are using the My Sassy Girl name to draw viewers. But, more plot will be revealed once we get the trailers I'm sure.

I doubt that they will completely stick to the movie plot, I thin there might be some changes to fit the saeguk theme.

I think they will only use the concept of the original. The princess is a sassy girl.

But I'm skeptical, how sassy a girl can get in the Confucian Joseon?

OMG give me my joo won already pleaseeeeee!! ???

Joo won and Oh Yeon Seo look good i am anticipating this to be a good one. I'll watch anything JW attached to it.

Yay, another upcomming Sageuk! So happy. I hope it will be good.

I still don't know what to think about this one. I just hope it doesn't turn out to be "Moonlovers 2.0 - the messiness returns", because everything about the backstage and production was a huge no for me.

What is wrong with Moon Lovers? Only SBS made a mess of it. It is a big success overall. The production company doesn't have to buy nominations for it to sell overseas as it's already sold out not unlike other hype dramas. As you are aware, producers only recovers part of the the production cost from the domestic broadcast, more specifically for big budget drama. They need to earn other revenue elsewhere to recover the full production costs and make profits.

As for overall quality; In fact it's the best drama of 2016

In addition, I also like the production quality of DOTS but the storyline of the drama was just so so and unbearable cheesy.

Back to my MSG, it interest me as it is fully pre-produced. Forget about domestic, but quality drama most are the pre-produced ones. At least, we are assured not to be punished to watch to many flashbacks and repeated scenes.

Aaaw i love both oh yeonseo and joowon. The poster looks pretty too
I hope there will be more detail about the story.. although i'm liking the part about the troublemaker princess

Oh I've missed Joo Won! I'm sad that there was so much controversy at the start, so I hope the drama makes up for it. I actually really like the actress too so I'm excited! Can't wait to see the trailers.

Gives me Moonlight vibes and My Sassy Girl was frkn hilarious. So many dramas this May, so little time...

I will very much watch it.

On the other hand I'm tired of all the mentions of the scandal. It was more than 8 months ago, and they still mention it.
That actress is starting at the SBS weekend drama now, so she's not empty or sad. Both OYS and Joo Won have done their share of weekend dramas and other projects to get where they are now.
Just drop it already and judge the dra for what it is (or isn't !!) :P

To be fair, the scandal stemmed from some pretty awful and unprofessional behaviour on SBS's part. I do see where you're coming from though. Personally I'm with Buhdoop on this one- trying to push the backstage mess to the back of my mind so that I can focus on enjoying the drama.

I am really looking forward to this show since I love Wonnie!! Hope it will not disappoint!! May is looking quite look in terms of line-up!! ^^V

I will watch this because Joo Won is my favourite Korean actor and I trust his acting ability. However, his recent projects were not well-chosen (ehem, Yong-Pal) and one actor (or a good cast) cannot save a badly written and commercial-driven plot. I don't find a lot of potentials for an interesting takeaway from this drama premise; nevertheless, I will watch and keep my bar really low! Go, Joo Won! (Hopefully, when he comes back, he will have a project as good as Bridal Mask, Good Doctor, etc. :)

I almost forgot about this drama BUT am already loving the poster! Nice to see you again, Joo Won. ☺️

I think I will pick this drama up, once I have recovered from my SWDBS withdrawals. Cannot not watch Joo Won's final drama before his enlistment.

That poster looks amazing! It's vibrant and fresh and I can already feel the comedy that's sure to come! I can't wait!

Are there such sculpted eyebrows (Oh Yeon Seo's) in Joseon? Maybe Aro passed down some of her eyebrow makeup heh.

I'm tentatively excited for this drama, mostly because the leads look adorable in their hanboks and seem to have pretty good track records in terms of acting ability.

Not such a fan of the bts drama (and I feel so bad for the second lead). It doesn't seem to be much of an adaptation to My Sassy Girl, so I'm just going to pretend its a completely separate drama...

ugh i'd watch it just for joo won :X

I'm definitely here for the Sassy headache causing princess! Wow, whoever's selling the headache curing powders in Joseon must be in business. I can just imagine them putting up a plethora of posters on the wall hailing their 'god' Hye Myung and praying that may she remain sassy till the very end. I know I would have!

23 YY Chats with Toast Between Bites

Sassy: Lively, bold and full of spirit...sounds to me a lot like Candy Girl.

Well its joo won my darling. May you should come soon.

I wonder how sassy she can be in joseon

Put aside the pre-production mess, I'll try watching it for Joo won~

I have this on my list of dramas to watch! This will be my first Joo-won drama, looking forward to it!

I did read somewhere that Joo Won will enlist on May 16th.....so this drama will be like some kind of legacy that he leaves behind to carry us over those 24 months. Now my expectations are rising through the roof.....no pressure at all!

I am so onboard this drama. Fusiony FUNNY saeguks are my crack.

Aaaaaaaaah so hoping this is going to be good... I have been really excited about this one~!!!

The poster is so pretty and it looks very promising! I am kind of reminded by how bad the first posters were for Hwarang. haha.

It's a little bit sad that Gyun-woo turned from just a normal student to "the most eligible nobleman in the Joseon Dynasty". Wasn't it part of the charm of the movie that he was so through and through normal?

So excited, can't wait for this

Finally we get a glimpse of the drama! Fighting!

Joo Woonie~ I missed seeing you in Kdramas! Looking forward to this!

Hope this one will be good... for uri Joo Won's sake. He's off to the army and I want him to live with a bang. He deserved that.

The last news I read was still talking about casting issues. Finally they will air, hope will be good.

Looking forward to this one. Hopefully it won't disappoint and will be a good send off for Joo Won.