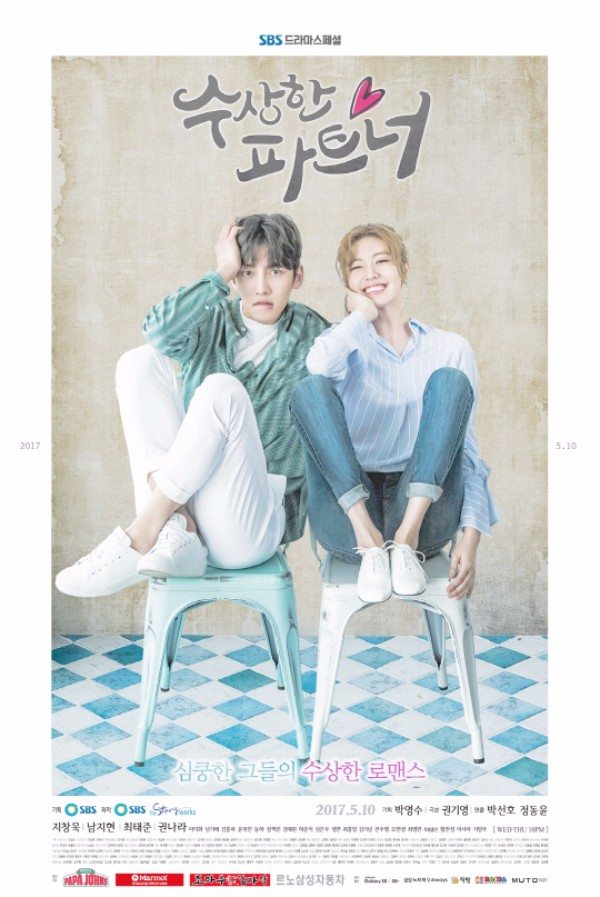 The promised “heart-pounding suspicious romance” of Suspicious Partner is only a week away! That’s what it says on the recently released poster for SBS’s new legal romantic comedy, which features our main couple sitting side by side, with Ji Chang-wook (The K2) making a slightly frustrated expression and Nam Ji-hyun (Shopping King Louis) looking pleased as punch.

Suspicious Partner is a romance between a sexy brainiac prosecutor, played by Ji Chang-wook, and a rookie justice department intern, played by Nam Ji-hyun, who’s a complete outsider to the entrenched legal system. She’s got an endlessly cheerful personality, while he’s more of a prickly cactus-type person. They have to work together on a mysterious case involving an amnesiac murderer, and of course between all the late-night work sessions, romantic hijinks ensue.

The second group poster actually reminds me a lot of the ones for Nam Ji-hyun’s most recent drama Shopping King Louis because of all its colors and the characters’ cute expressions. The copy reads: “Shockingly suspicious and insanely lovable,” and includes second leads Nara (of idol group Hello Venus) and Choi Tae-joon (Missing 9).

I’m cautiously hopeful because writer Kwon Ki-young wrote Protect the Boss, and PD Park Sun-ho worked on Legend of the Blue Sea. And so far, the released stills have looked promising: The ones below show some of Ji Chang-wook and Nam Ji-hyun’s initial coincidental meeting in a subway, where misunderstandings occur because a pervert is supposed to be on the loose. If Suspicious Partner is anything like the fun, colorful posters and teasers we’ve seen so far, you can definitely count me in because I’ve been praying for a light cotton-candy romance.

The first broadcast of Wednesday-Thursday drama Suspicious Partner is coming up next week on May 10. 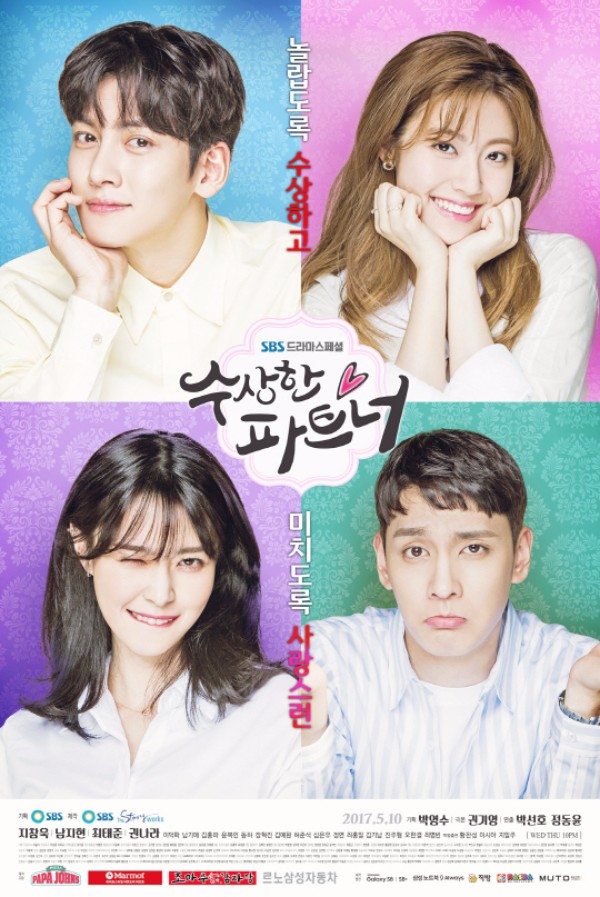 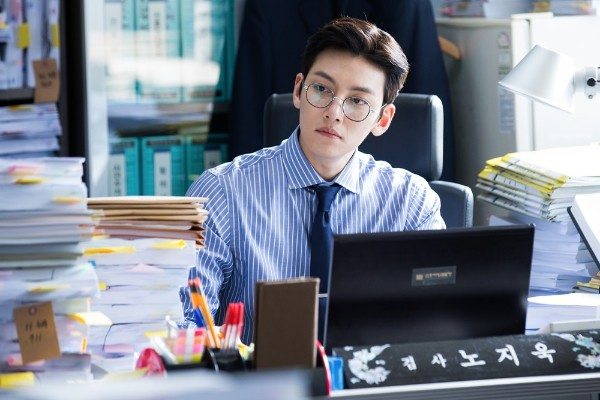 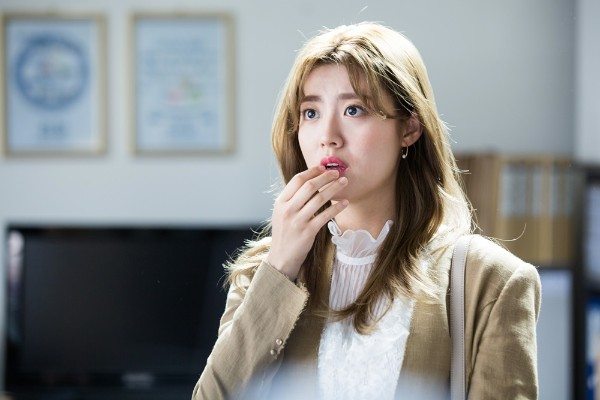 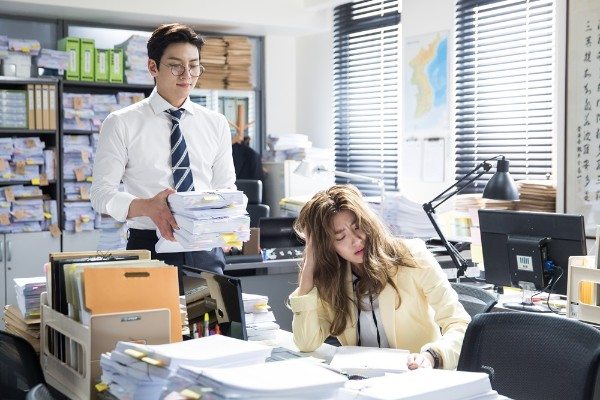 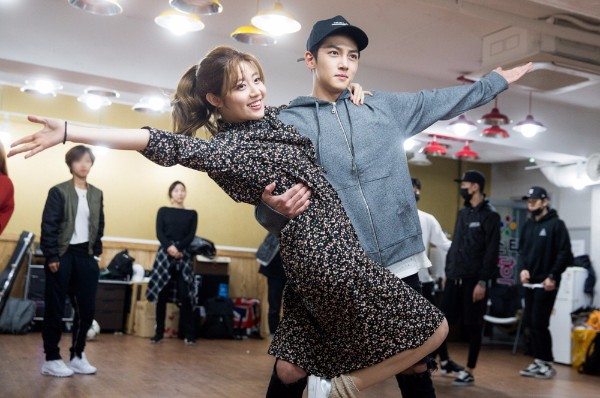 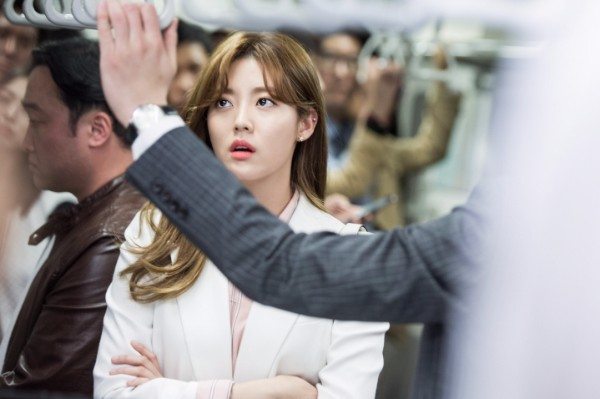 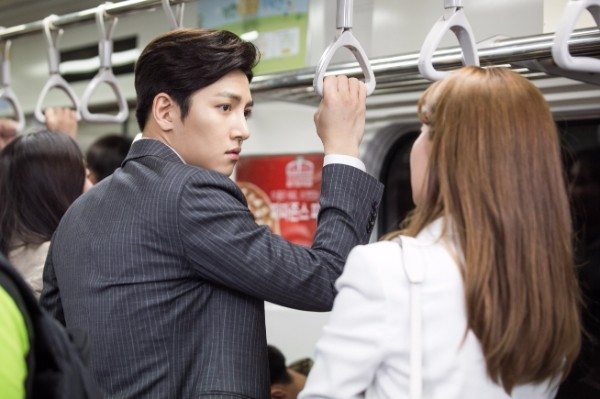 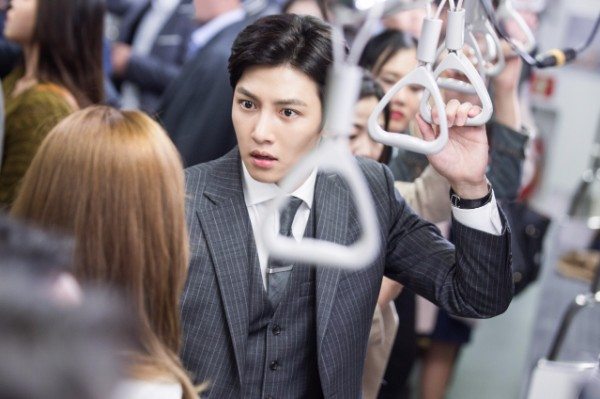 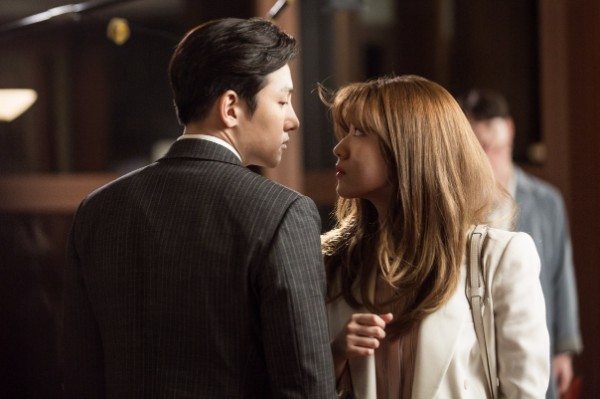 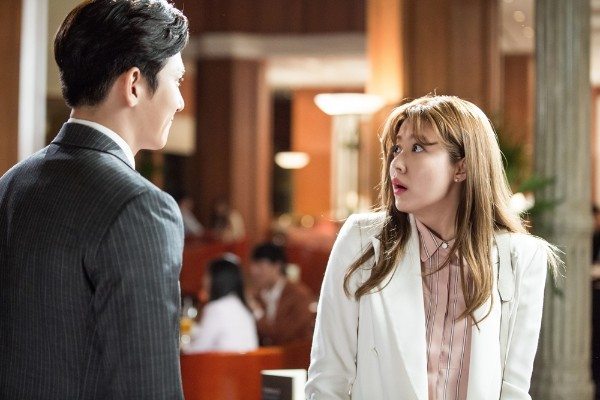 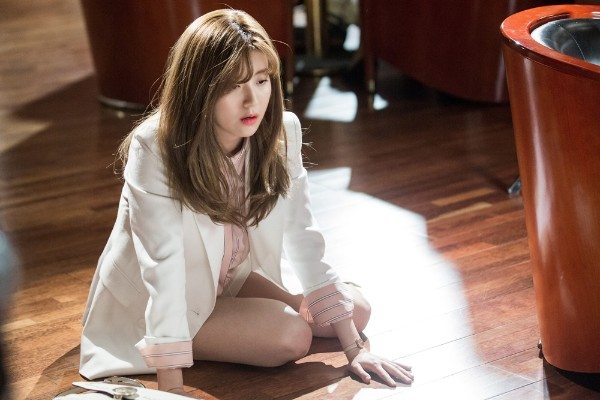 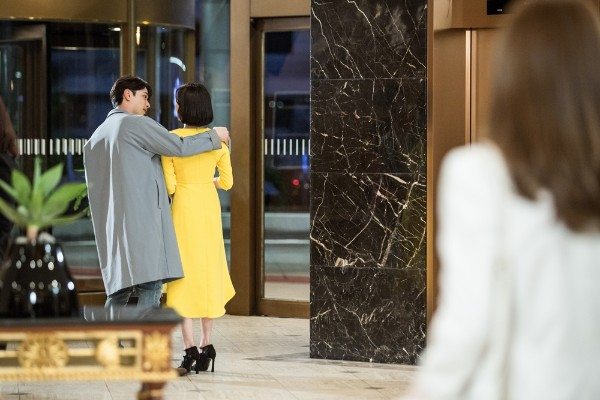 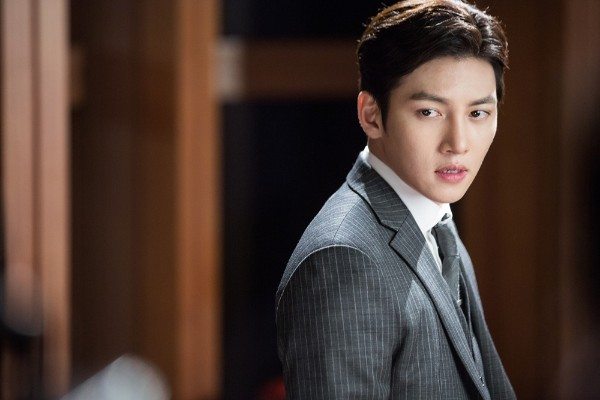 I'm sooooo looking forward to this. JCW is my K-crush so fingers crossed this will be as cute (and as heart pounding!) as promised!

I really hope this drama delivers well! I usually don't read nor watch trailers to avoid overestimating a drama, but I just can't help myself when it comes to JCW! Like, hello Healer!

Ha ha.... same here.... also i am kind of new in the art of watching a drama while is being aired. Usually i watch dramas that are finished, so that i know by the critics that is good and i do my Marathons.... but.... well, since SWDBS i have been watching while on air and it is very cool and exciting!
So, to make it short.... now i am ecen checking the teasers! Oh my Gosh.... i am becoming a true K-fan! LOL ?

I find it funny that they emphasize that the prosecutor is "sexy." I mean it's JCW, so sexy can be safely assumed. :D

That instead of "geeeeeenius" is what you call progress.

It kinda goes without saying.

Is it even possible to find a sexy brainiac prosecutor who happens to look like Ji Chang Wook? *grins
3rd teaser featuring even cuter and heart-fluttering romance between the leads. May 10 can't come faster!
http://tv.naver.com/v/1648680

Love the colors of the first poster! Can't wait any longer!

The colour palette is pretty soothing and aesthetic

This is one of the dramas I'm looking forward... BUT given the number of dramas I found lacking in recent months, I'm also nervous...

I love this already and I think is gonna fill in the blank space left by Radiant Office when it ends.

I can't possibly be the only one earnestly waiting for Saimdang... to end just so this could start. It's like May 10th can't come any faster. Every week I see the show, I get so unreasonably upset that it's not on. I have nothing against the show - I watched the first and dropped it after five minutes - I just want suspicious partner to start. ???

Which one is Saimdang????
And when will it end?

Can I just say that the image poster that's the 5th to the last is sizzling with so much chemistry! If this drama shall hold up and give us comedy and then ramp it up in the heat department, I shall be one very happy Beanie

Ji Chang-wook... why you so pretty! Love the suits. The one thing I love about legal dramas are the amazing suits they put the leads in !!

I'm scrolling down looking at JCW's pics and am practically drooling at work. LOL

I'm practically drooling right along with you. He looks SO GOOD in a suit, gaH!

Definitely. I think the clothes are gonna be really fun for this one.

Hurry the hell up and air already! I'm ready with my whole body, would sell an organ if that helps. JI CHANG WOOK in a fitted suit and slick back hairdo(that forehead!) is more than what I dream of. Nam Ji-hyun is always lovable. Rooting very hard for these too.
Although writers' past doesn't mean much in most cases, Protect the Boss was great, may this Suspicious one become half as good.

Amen to the slicked back hairdo.

Amen to that glorious forehead.

I Remember You was amazing, so I have a lot of faith in this writer. ?

MY HEART. They are so cute and lovely. This is how I'll survive while I wait for Fight My Way to air.

Hahah I'm watching this for Nam Ji Hyun too. Ji Chang Wook is a bonus ? Cant wait for the drama to start!

Much needed break from serious and heavy dramas.

One more week to go!

I so need this to be good. I'm in a serious drama slump, and I love both Ji Chang-wook and Nam Ji-hyun.

Kudos to whoever is doing Nam Ji Hyun's makeup. She looks so beautiful and mature

i know right... i think the rid of the bangs did so much to bring out her maturity...

Love these white-washed posters!!! Definitely giving me an 80s vibe.

Same here @tineybeanie. I also felt the same seeing the second poster. Its just like the shoping king louie. Plus nam ji hyun is on that show too.. hahahaha

Was there anything else regarding the setup and premise of this rom com? Sounds like they didn't go very deep into the pile of rehashed story lines and characters on this one.

Are we going to be entertained (?) by office politics, hidden powerful people pressuring prosecutors to drop cases, and our hero has some chaebol connection while the intern comes from a poor background I.e. Cinderella type story?

This can be hilarious if they use all the rehashed stories, characters and tropes and subvert them.

Often, there's nothing absolutely new in Kdramas. Rarely do we see something that's wholly different like 'W'. Although I didn't complete the show, I thought the writing was very interesting and creative in the beginning. It's a laudable effort even if it wasn't a complete success.

On the other hand, cliche story lines and characters can still be entertaining if the writer offers something new beneath the superficiality. Take for example 1% of Anything. It's hardly groundbreaking and looks not much different from the original. However, the show turned out unexpectedly good. Radiant Office is another example. It's mostly all about office politics, a power hungry corporate heir and a Candy girl. Sounds nothing new but the writer is doing a marvelous job in subverting tropes, bringing a slice of office life and solid character development all round.

You should really read the previous articles for the story, this is just for the newly released stills and posters.

I'll probably check this out. Looks cliche though

I love these photos! I see traces of Healer's Bong Soo in some of them - hehe!

Ji Chang-wook is so damn fine in every single shot. Please, Suspicious Partner, be a great show. The K2 just didn't appeal to me, and I miss him.

I am so ready for this, although I'm not a big fan of legal kdramas I will watch this for both JCW and NJH. Fingers crossed it's a rom com that hits all the right notes.

HOMG SOO EXCITED! Pleeeease let this get me out of drama slump!

The third teaser seems fun and promising. JCW is very good in rom-com . He is just comical naturally and he just doesn't realize that he can do it so well. I can't wait to watch this entertaining drama.

tineybeanie, I think you and I have been praying for the same thing :) Bring romance back, kdrama!

Looks like these two has great chemistry! I can't wait to see this!

I like these posters, I wasn't planning to watch this when it airs but I think I'm going to give in to the temptation of SO PRETTY!

Those two look great together.

LOL! These are the things i also hate in a K-drama. I am also not very fond of a second lead who doesnt read tje signs and stupid chaebol conspirations.
I believe that normal people with personalities also have the right to live their own stories!
Anyway! Let's wait and see! ☺

Wookie, pls take it easy with ur cuteness, this noona's heart will explode!

I thought park hae jin and ji Chang wook are equally handsome in my eyes..certainly got so obsessed in CITT and healer..
But seeing these two with slicked back hair I could honestly say JCW look infinitely better..more handsome, more dashing..while phj look old in his bodyguard hairstyle...

May 10th can´t come fast enough. These two just look great together. I need some cute romance in my life and so far it looks like they will deliver. Please dramagods let it be good. I will watch it either way for Wookie but I need me some cuteness.

With all the parody-ing this show has done, my gut is telling me that the poster is supposed to be inspired off Shopping King Louis. They're both rom-coms and both have Nam Ji-hyun. Hahaha. I really like the color scheme they made!

Looking forward to this new rom com. Always missing JCW soooo happy he is back for this before military.

This drama will be the death of me. I'm not sure if I even care about its quality. I just want some 16 hours or so of seeing Ji Chang Wook, period. I can always tune out and choose not to read the subtitles if I am not liking the story, and I will just stare at that guy's beautiful face. ❤

A drama where I like and look forward to both leads! Please don't dissapoint :)

Nam Ji-hyun, little girl has all grown up.

I ship them already and it hasn't even started. They have good chemistry just from the stills! Okay, maybe I'm just bias. Love these two <3

P.S I was so distracted (and excited) from the pretty stills that I typed my comments in the subscribe box! Didn't realise until I went to click on 'send' and saw 'subscribe' instead. Whoops!

I am really waiting for this drama! ?