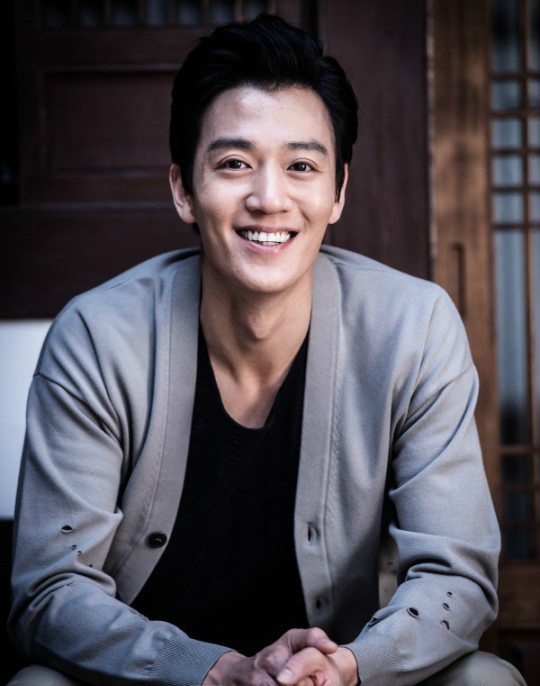 Ooh, Kim Rae-won in a fantasy romance? Color me intrigued. There’s a new drama in the works over at KBS titled Black Knight, and Kim Rae-won has been offered the lead role. The actor followed up his last drama Doctors with several film projects—The Prison and Resurrected Victims—so I’m happy to hear he is considering a return to dramaland.

Black Knight sounds like it could be an epic romance with fantastical elements: One man and two women will be the main characters of a love story that spans two hundred years. Kim Rae-won’s character is described as a self-made entrepreneur who willingly accepts a dangerous fate for his love. It’s unclear how exactly the story will bridge two centuries; will these characters be reincarnated? Or are they time-travelers? Immortals? In any case, I’m a sucker for a good fantasy romance, so I’ll be keeping an eye out for this drama.

Black Knight will be the latest collaboration between writer Kim In-young and PD Han Sang-woo, who have previously worked together on Unkind Women and Equator Man. I haven’t watched either of those shows, but I’m slightly wary of this writer, because her other credits include the drama When a Man Loves starring Sohn Seung-heon, which… wasn’t great. I don’t think I managed to get past the first few episodes, but for those of you beanies who did, let us know whether the show got better further on in its run.

If Kim Rae-won does sign on to Black Knight, though, I will definitely have to check this show out. I have a really big soft spot for the actor because he was in some of my favorite Korean dramas and films back when I first started watching them as a kid: Attic Cat and My Little Bride will always be sentimental favorites no matter many years pass.

Black Knight is being planned to follow Mad Dog on KBS’s Wednesday-Thursday slot, with a premiere date sometime in December.

I adored Unkind Women, adored. So I will watch it for that and Kim Rae Won, but much like tipsymocha I didn't get past the first 20 minutes of when a man loves. Hopeful, but wary.

When A Man Loves was so SO bad.....possibly one of the worst KDramas I've ever seen....SSH was okay but the female lead/second male lead ugh.

Anyway Kim Rae Won is a fav of mine I hope he is cast alongside good actresses.

The two women thing idk. Love triangles are so :/

damn I must've jinxed it they cast Shin Se Kyung......

Yes, I thought the same...She is an awful actress WHYYYYYYYY!! Bye bye drama

Oh dear SSK the female lead then not gonna watch it.
Hope KRW picks another drama.

@tipsymocha The Equator Man is so good you have to watch it. I just didn't if you consider who's the lead is that's why you're not watching it but Uhm Taewoong is really good in that drama acting wise. Song Seung Heon when a man falls in love is also a good one I don't now but I find it watchable because of him maybe I just like him doing action drama. Just give it a try esp the equator man :D

I got too invested in the childhood actors (Siwan and Lee Hyunwoo) that I never really connected with the older cast. I ended up dropping it.

The same thing happened with Angel Eyes. Kang Haneul and Nam Jihyun were perfect as the younger cast.

I smell a Disaster on the way, SSK will be the female lead again
guess the writer really like her acting "if we call it acting" so she sent her a love call
Goodluck KRW

With Shin Se-kyung as a possible partner, made me wary more. She have some OK impressions, but there are more bad impressions than good ones in her projects. It is quite tiring to wish for her to be good for every single project. There are many actresses that can be the leading lady who we don't have to worry about acting- for eg Yoo In-na.

I agree with all the above, including the Yoo In-na bit. Miss her bubblyness (that's not a word, but you get my drift).

"It is quite tiring to wish for her to be good for every single project." THIS IS ME whenever she got a lead role along with my favorite actors. I always tried to give her a chance to see she if she would improve and if I could like her, but she stays the same: the same old expressionless Shin Se Kyung. Sometimes it makes me wonder, what's in her that the director or writer would give her a lead role?

I think casting these group of actors is some sort of marketing/promotions especially when they are casted with some good actors. It might be due to people's opinions on them which can raise more curiousity on how they will perform. I can't think any other reason, and she is also not a bankable actress either as far as I know.

I don't think she is the worst actress in my book, but the inconsistency of her performance made me not excited about her.

i really regret defending her when she was cast in Bride of the Water God. i thought i saw small improvement in her role in Six Flying Dragons, but it appears that one maybe have been a fluke. she doesn't seem to draw in tons of ratings either and a lot of k-nets criticize her just as much as i-fans do, so i have no idea why she keeps getting cast. i guess her agency is just very good at getting her roles.

She and some other actors/actresses are really lack of consistency of their performance. True, script and directing play important role too, but that's different case. Actors with at least decent skills can still give a decent performance despite of terrible script.

"It is quite tiring to wish for her to be good for every single project."
This. LOL. Exactly. I hope KRW runs as far away as possible. I remember TMWL, and the blade man which was equally a disaster. This is actually getting frustrating, I mean there ate SO many good actresses why do they always go for the novice, hard to connect to, and actresses with minimal range? And then against KRW too. Are they in the wrong profession? These casting directors? 😣

I don't think Song Yoon-ah is up for some fantasy romance drama anymore, maybe some lowkey romance and she seems to be a picky actress too. I think she will do a movie, I read the news recently. This kind of role and genre suits younger actress anyway.

You never know until you've tried. Kim Rae Won isn't exactly young either. She managed to have more chemistry with Ji Chang Wook who is 14 years her junior than Yoona did. So, just give these beautiful, talented ladies roles first. If the writing can be up to the mark that is. Shin Se Kyung, a lot has been said and I don't disagree. She lacks intensity and charisma. She is one note.

This could've been a great drama.... but they cast shin se kyung.... kms

Has it been confirmed that they're casting Shin Se Kyung??

Oh ok, let's hope for a good pairing, I'm sorry but someone else besides Shin Se Kyung

Same here, any mention of 'fantasy' & I am gamed! Watched both Unkind Women & Equator Man - both were good. Beautiful & ambidextrous Shin Se Kyung is one competent actress; she was superb in all her given roles. Would love to watch her paired with Kim Rae Won or any good looking male lead! Different strokes for different folks - I'll say...yes...looking forward to this drama by then.🙏🏼

Didn't he film both RV and Prison before Doctors? I thought they were filmed in 2015-16 and just happen to be releasing now. He's basically been on a break since Doctors only coming out for movie promotions.

I like the sound of this drama and I've always wanted KRW to be in a fantasy romance. I don't mind SSK either. She was good in her last few projects so I don't mind their pairing.

Yes"Doctors" was his latest project to date. Those 2 movies were filmed before.

Hmm maybe Kim Rae-won is a standby for a man from the past? "Black Knight" is a Korean term for "black horse" in English.

I thought they'd air Seo Kang Joon's drama next, the one called Are you human, too? What is happening to that drama, it's been ages since I heard something about it?

Are you human too? will be a pre-produced drama and it will broadcast next year. They going to air at the same time as China.

My interest dropped dramatically when I knew SSK was offered the main lead opposite KRW. Deep sigh... I skipped Doctors and now probably this one too. It seems take a long time for me to watch a
KRW twice in a week... And I saw the news on Naver that Seo Ji Hye will be the second lead. Dramagod, can SSK reject this offer and SJH moves forward become the main lead? I like their chemistry in Punch. Pray hard...

I am with you!

Seo Ji Hye will make a much better leading lady for KRW then SSK. Also Seo Ji Hye had great chemistry with KRW in Punch.

Seo Ji Hye would be so awesome. She is great in any genre.

I think both Kim Rae-won and Shin Se-kyung almost signed on this drama, it's just no offical news yet. Seo Ji-hye is up for another female lead role, but I hope her role is as big as the other two, looking at the synopsis it will be between male lead and two female leads. SSK's role isn't sound that much interesting but in the hand of right actress,it will be great. I'm curious what SJH's role will be. If these three confirm, I'm pretty sure KRW-SJH will have better chemistry.

When A Man Loves: It was so bad that I actually cheered when the hero's best friend ran the hero's girlfriend over with his car.

Great! We're all looking forward to it. Hope to consider PARK MIN YOUNG as his leading lady! We do miss him!

After ParkShinHye, ShinSeKyung?? after Hallyu Royal princess to a hot duchess?? not a good idea. KimRaeWon is rich, he doesn't need money desperately, I think he should go up and up not down and down, with ShinseKyung, he will constantly be reminded of his own naked scenes in GangnamBlues and Blossoms. Geunshinners, YongShinners said KimRaeWon&ShinSeKyung actually one of a kind, they are classified "soft...." youknowIknow.

Glossy pictures of skinny celebrities in the bikini that lost almost all
their baby weight inside a month. So, my answers
are not typical, but I strongly feel that in the event you define your goals, and IF you want "RESULTS NOT TYPICAL," you are able
to apply the lessons learned by others in the Banded Living - A community to accomplish your goals for weight loss, health,
and excellence of life. The more muscle you will find the faster you are going to shed weight.