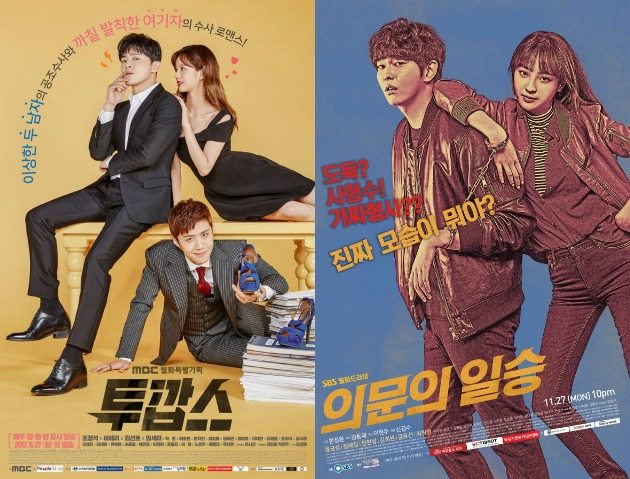 What are the odds—we’ve got two new mistaken-identity police dramas on the way this week, and they’re both starting on the same day. One’s about a con man’s soul possessing the body of a cop, and the other’s about a convicted murderer on death row who steals the identity of a cop. Basically we’re just going to have a bunch of phonies masquerading as police in dramaland this season. Will it be a battle to be the best cop, or the worst cop who makes us laugh the most? 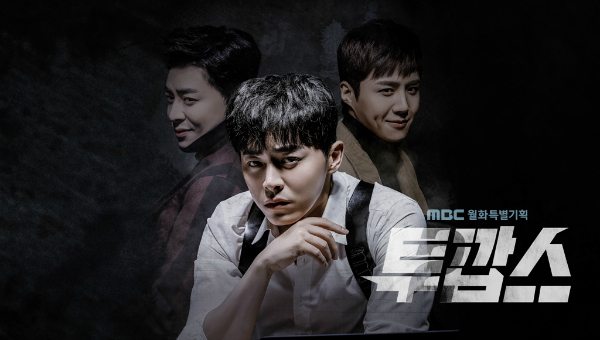 Reasons to watch: Jo Jung-seok is up for a dual role in this, so that’s the primary draw. He’s going to play a righteous detective who becomes possessed by a con man, resulting in a body-sharing situation that’ll make him seem like a crazy person to everyone around him. The two characters couldn’t be more different—the cop is humorless and unrelenting and a total badass, while the con man is a cocky smooth-talker who can get away with anything—which should yield hilarious situational comedy (fingers crossed).

The romance with Hyeri is the big question mark, so we’ll have to tune in to find out whether they have any chemistry together. I did love this PD’s last drama, Weightlifting Fairy Kim Bok-ju, so that’s a plus. Mostly though, I just want it to be a body-possession drama that makes sense and doesn’t make gaping logic errors in its setup and resolution. Why is this hard, drama gods? 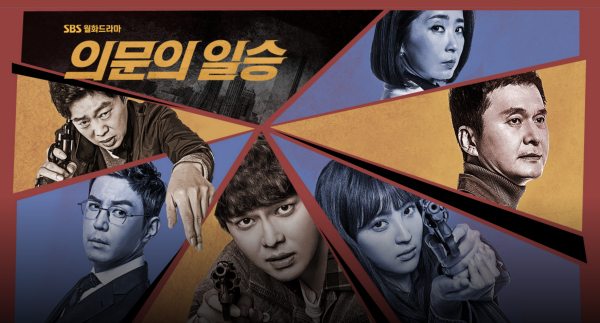 Reasons to watch: This mistaken-identity cop drama isn’t a fantasy, but it will require just as much suspension of disbelief, because Yoon Kyun-sang plays a convicted murderer on death row who chances upon a ready-made identity for him to steal—a violent crimes detective. Of course, he’s not actually a murderer, but was wrongfully charged at the young age of fifteen and had his entire youth stolen from him because of a lazy and corrupt justice system. He naturally grew up hating the law, but will now have to do the work of a detective if he wants to survive.

That sounds like a good story from the get-go, not to mention that this drama comes from a very solid team—PD Shin Kyung-soo of Six Flying Dragons and Tree With Deep Roots and writer Lee Hyun-joo of Pride and Prejudice and School 2013. I guess if I’m already rooting for the hero to fool his detective colleagues and clear his name while fighting crime, they’ve managed to catch my interest.

I would probably avoid Two Cops, chances that I would get SLS is too strong there (because Dimples....)

I know, I almost forgot Kim Sun-ho would be in Two Cops! It's weird, I absolutely love Jo Jung-seok bc he's brilliant but somehow in Jealousy, I got SLS for Go Kyung-pyo who then finally got his lead chance in Deliveryman but then my heart was stolen by Kim Sun-ho... and I usually don't get SLS...

Anyways... sorry for the tangent lol I will still check out Two Cops for the cast!

Besides these two, I'm also interested in Jugglers. So, will continue to be kept busy watching K-dramas.

Omo same! The actors and actresses are good, but what's stopping me from watching are the themes. We need new Kdrama themes.

Ahahahaha...
Now is JJS's turn to have double opposing personalities--Park Bo young has done it in OMG.
I'm curious with why YKS is in death row. Is it because he's sinfully cute? Or because he was a rebel in his past life?
>,<

Gonna tune in for both of them,hope they will deliver!

and i'm going to watch Doubtful Victory too if there's subs.

I would be much more excited for Two Cops if Hyeri wasn't the female lead. She's just terrible, and I don't understand why they're casting her in these roles. So many talented actresses not getting lead roles, yet terrible ones like her get them.

On the one hand you have Jo Jung-seok, who is brilliant. Then you have Hyeri who sucks.

I'm gonna be tuning in for both. But, I'm just a bit worried that Doubtful Victory is 20 eps (40 half-hour parts). I hope the story stays strong and doesn't start to drag near the end.

I don't think DV is going to be my cup of tea. I'm neutral on the two leads, the premise sounds completely ludicrous, and I can't imagine it's going to be able to sustain itself for 20 episodes. Thrillers should be 16 eps max imo. Pride and Prejudice was also a mess (it seemed like the writer was making the story up as she went along) and it was super draggy. I think I'll pass unless I hear good things.

Two Cops has a familar premise but I do like the main trio. JJS is good in everything and nails comedy. I only watched some of Strongest Deliveryman but Kim Sun Ho is a natural imo, he seems well cast here. I hope Hyeri brings her a-game for this show and the rookie writer delivers. Fingers crossed!!!

I need a new drama but not sure about either of these. Jo Jung-seok is great at comedy, but I'm not terribly fond of the body-sharing trope.

Doubtful Victory might be okay if it's funny but 20 episodes automatically makes me wary.

Can't wait to watch Two Cops. Watched the latest teaser of the drama and it's supper fun.

Seems like my Mon-Tues will be busy again! interested to watch these two, and also upcoming Jugglers because my babies are there too!

I'm trying DV at least because I adore Jung Hye-sung. The episode count scares me as I think 16 episodes is already too long for most dramas but we'll see!

I'm checking out Two Cops too because DIMPLES I NEED DIMPLES. (I mean, obviously Jo Jung-seok would be brilliant, but KIM SUN-HO I MISS YOUR EMOTIVE FACE AND CHEMISTRY WITH ANYONE AND EVERYONE.)

I'll definitely watch Doubtful Victory because, well.. just like common reason for a fan girl all around the world to watch a drama; there's Oppa in that drama 😆 Yoon Kyun Sang is my first priority kekeke~ and I had wished for another thriller like "Two Weeks" in my life

Now I get it! I've been getting these two mixed up. Sometimes thinking it's the same drama, sometimes mixing up the plot and sometimes mixing up the cast. Now I get it, similar and starts at the same time but different dramas hmmm
I don't have high hopes for both (not the actors, mostly, just that a drama can always screw up at any point. Even 5 minutes before ending) but I'll try them, because exam week soon.
And exam week means I want to watch more dramas than usual yay me........ ;A;

I want to watch Two Cops but the female lead... ughhh..

I probably start both.... maybe finish one.
But I'm really hoping for a show where an actual talented writer steals the identity of the no-talent hack with the pick-a-trope machine.

Thanks for the update on these premieres, Girlfriday!

So far so good. Just finished the first two episodes of TWO COPS, and am 10 minutes into DOUBTFUL VICTORY. As if I weren't already confounded enough tying to keep MAD DOG and BLACK straight in my mind. ;-)

I just watched the first episode of doubtful victory and loved it, its great and really interesting so far. The pace of the story and acting are all are good

I don't understand the hate for Hyeri, with people even using foul language when talking about her. Why so personal? Can someone please enlightened me? I love her in reply 1988. Never see her in anything else though.

There are even 2 unregistered comments above, which I think were made by the same person just to hate on her LOL.

Well ive watched her in 2 dramas, hyde jekell and me (this is before reply) and entertainer (post reply) and man, she really sucks she ruins the dramas. She was able to nail her role in reply bec the writer wrote her character based on hyeri thats why she is most likely just being herself lol. This drama has a huge potential to be really great. Jo jung suk can nail any roles that can be given to him, most especially comedy but here she is going to be a female lead just bec she is famous enough and her agency has connections to land a role

imma watch out for two cops, I think it's going to be hilarious.

Why do I feel like the first one would be so much fun and comedic!! Maybe it's because of the Jo Jung Seok effect!!!

Loved the premier of Doubtful Victory ❤

Kim Sun-Ho is the reason I'm watching Two Cops as he a delightful actor. In the first two episodes, it was funny to watch Jo Jung-Seok taking on the characteristics of Kim Sun-Ho.... it was like putting an energizer battery into a run down toy. I am also wondering which parts of the fight scenes are Jo Jung Seok and which are a stunt man as they are pretty intense in the martial arts. So far this is really a fun drama and I look forward to next week's episodes.

Jo Jung Seok is doing all of his stunts in the drama. Hyeri even said she thought he was wearing a wire because he jumped up so high. This actor is amazing