Premiere Watch: Should We Kiss First, Children of a Lesser God 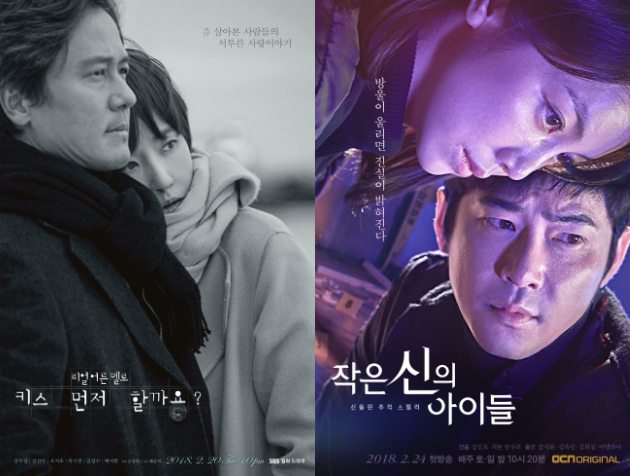 This week we have a new melodrama on SBS and a new paranormal crime thriller on (where else) OCN, or as I like to think of it, Kim Sun-ah falling in love and Kang Ji-hwan fighting crime. 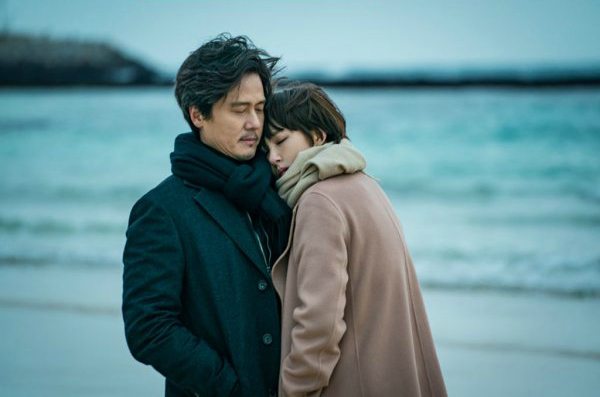 Reasons to watch: Kim Sun-ah and Kam Woo-sung star in this romantic melodrama about a middle-aged man and woman who had given up on love for varying reasons, only to end up falling in love when they least expect to. I Have a Lover’s writer, Bae Yoo-mi, is penning the script that follows the rather funny (for a melodrama) setup of a couple reuniting with a kiss that awakens love cells they thought had died off long ago. Kam Woo-sung plays a producer at an ad agency who’s being pushed out of relevancy due to his age, while Kim Sun-ah plays a flight attendant who suffered the loss of her child. The teasers have been upbeat and contemplative, setting the stage for a feel-good healing drama that asks very relatable questions about aging, self-reflection, and love. I expect Kim Sun-ah to make me laugh and then wring my heart out, so that’s pretty much the main reason to watch this one. 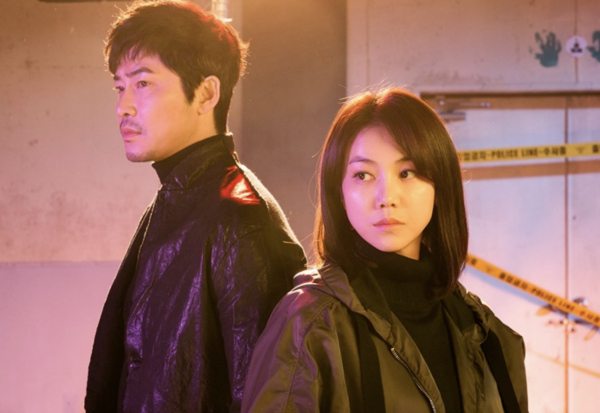 Reasons to watch: Spine-tingler alert! Children of a Lesser God is a crime investigation drama with a creepy supernatural twist, about two detectives who partner up to fight a shadowy organization—one detective only relies on cold hard facts, while the other has a paranormal sense that allows her to relive a victim’s gruesome death. This is otherwise known as OCN’s bread-and-butter formula, but it obviously works, and with Kang Ji-hwan and Kim Ok-bin starring as the investigator duo, I’m expecting great antagonistic sparks between them. I’m a big wuss about the gruesome deaths though, so I’ll have to check out the first episode with my eyes covered in case it turns into another Voice, which broke OCN’s ratings records at the time but scared me away. If it’s closer to Vampire Prosecutor’s method of seeing the victim’s final seconds in a stylized vision, I can deal with that. PD Kang Shin-hyo of Heirs and Midas is at the helm, so it’s anybody’s guess what direction the thriller will take.

Tags: Children of a Lesser God, Premiere Watch, Should We Kiss First

Ooh both sound deliciously good! But one has Kim Sun Ah and that's why I'll be checking it first.

I plan to check these both out. They sound amazing! Plus, I hope Kim Ok-bin can show off some of her badass abilities that were showcased in The Villainess.

Should We Kiss First sounds nice but I think I've had my fair share of melodrama for a while now after JBL and the currently-airing Mother.

Children of a Lesser God sounds really interesting, though! It's been a while since I've watched a thriller so I think I'll be checking this one out. Surprisingly, I've never seen either actor in anything before! That's always exciting for me.

I'm actually more interested with Should We Kiss First, but I'm not really good in dealing with the aftermath of watching melodrama.
I'm gonna wait until I find a good fluffy drama as a tandem for SWKF

Hi, mindy. I knew Kang Ji-hwan from "lie to me", which I actually liked at the time, but I didn't have much taste back then, lol, and... he is ok as an actor. Sadly for me, I am currently not interested in this type of dramas, so I don't want to watch it. If you decide for it, have fun!!!! I keep on JBL rewatch, my comedy waikiki and my personal mirror tragedy: Mother.

Kim Ok-bin is a talented and solid leading lady in films. The action princess of Chungmuro.
She would be believable in a detective role and she can do her own stunts.

Kim Ok-Bin is pulling out a Uma Thurman of the East in her recent movie “Villaines". Her Yoo-na would easily be one of the most unforgettable female characters for this decade.

The Vilainness is an amazing shot movie imo... And Kim Ok Bin acting, wow.... she is so kick ass

She has high rank martial art skills in Hapkido and Taekwondo. She does Thai boxing too.

I'd love to be her friend so she can protect me lol.

Kang Ji Hwan 😎 😍 *he's in top 3 if I ever make an Ahjussi list hahaha* Capital scandal, Hong Gil Dong, Coffee house, Lie to me, Incarnation of money..in 2013...it's been too long, scaredy cat me will try, I'll try for Oppa 😋
drama please be good and don't scare me too much thanks :)

I'm so excited to see familiar actors back on screen.

Without even knowing what it's about, can I just say the title "Children on a Lesser God" just sounds freaking cool. I already want to like it. What an epic name.

Thanks for the timely reminder about SHOULD WE KISS FIRST, GirlFriday!

I've been looking forward to this premiere since first reading that Kam Woo-sung was headed back to Kdramaland.

I'm a bit surprised that it is starting its run during the Olympics, and hope that it doesn't get preempted.

Kam Woo Sung is my man:-) He was one of the leads in the movie The King and the Clown,with which Lee Jun Ki shot to stardom more than a decade ago. A wonderful and cool mature actor in a mature story,yay :-)

Yep, it was THE KING AND THE CLOWN that put KWS on my radar. ALONE IN LOVE and SPRING DAY OF MY LIFE were dramas I enjoyed because of his performances.

Have you seen the first episodes of SHOULD WE KISS FIRST? ? It looks like it will be entertaining. ;-)

I have watched the first 4 episodes enjoyed SWKF very,very much...has the right balance btw drama&comedy and the comedy genre is not slapstick but situation comedy (I hate slapstick).
PS:I've seen Spring Day of My Life but it was really bad as a drama.

Kam Woo-Sung epitomises slow-burn sexiness. I am expecting great chemistry between him and KSA.

I look forward to both dramas as these two pairings should be great.

Anyone have a clue on whether Viki, DF or Netflix will pick up Children of a Lesser God? Really want to see that.
Of course I will be watching Should We Kiss First for Kam Woo-sung...

Hi Islander North. That is a good question about Children of a lesser God. I have enjoyed OCN's dramas including Tunnel, Voice, Squad 38, TEN and TEN2. Bad Guys is one of my favorites.
Here is my concern. OCN's Bad Guys: City of Evil as far as I can tell was not picked up by Viki, DF or Netflix and I believe only 4 episodes have been subbed into English. Will CLG be picked up? DramaFever recently carried OCN's My First Love (Longing Heart on DF) so there is hope. DF is currently showing (and I am following) JTCB' s Misty and tvN's Cross
so maybe OCN dramas will find a home there.
(That is a hint to the folks at DramaFever).

Hi ronni. I was away for awhile and checked in with DB and saw your comment. You may already know by now, so apologies. I just found out last night that all 16 episodes of Bad Guys 2 is now available subbed on Netflix under the title Bad Guys Vile City. I think Netflix releases all the episodes of a series at once when it had finished its original broadcast. It is still a mystery where series wind up. I did not know that Netflix has the rights to BG2. The same may happen with CLG. Unfortunately we may have to wait until after it has finished its original broadcast. On the other hand Prison Playbook was available subbed (with I think a week delay) during its original broadcast run before Netflix released all 16 episodes.
On the plus side perhaps OCN dramas have found a home on Netflix.

Am I the boring one??? Because these plots don't work for me. I find them boring, but maybe I am the party pooper! LOL 😂😂😂😂 anyway.... I pass

I'm ready for a thriller, but I hope it isn't too graphic! I'm not into melos, but I like the teasers...but also I'm not sure if I can commit to 16 episodes of it.

Going to try watching both the shows, but I'm sorry if the murders get too gruesome goodbye Kang Ji Hwan because even though I love you, I can't stay.

I'm in the mood for a graphic thriller. Even though Voice forced me to watch the show when the sun was out (mostly because of what happened to the grandmother), it was gripping from start to finish. And this balances out Mystery Queen (*squealing*) which starts next week.

I thought Mystery Queen will start this week *crying*

I really love the younger cast of Children of a lesser god. I'll definitely watch this, plot seems interesting and I'm becoming a big fan of OCN dramas

Yay, new shows to check out!
Thought can watch Should We Kiss First already, but for a Mon-Tue show, it apparently premiers on a Tuesday..? Crossing fingers real hard Children of a Lesser God is subbed somewhere!

Unfortunately - so far "Children of a Lesser God" has not been licensed. I hope more people will submit license requests for it: To Viki
https://vikiinc.wufoo.com/forms/title-request-form/
And DramaFever
https://docs.google.com/forms/d/e/1FAIpQLScuXiW1XwtSRt0H_ehdDMABJYJNQWA1xj78ni06l4m_OG-ZHg/viewform

Hi Irit, Thanks for the links. Done on both.

I'll give Kim Sun-ah and Kam Woo-sung's drama a try and see what happens.

Sounds like that one jdorama Maki Horikita starred in where she can relive or maybe imagined the death that happened to someone. I can't remember the details now since I only watched the first episode because the premise is really inriguing.

At first I thought 'Children of a Lesser God' was redoing the 1986 William Hurt romance movie. Not even close. At least the Gong Woo series "Big" had a vaguely similar theme to the 1988 Tom Hanks movie of the same name.

COALG is going to air next week because of the Winter Olympics.