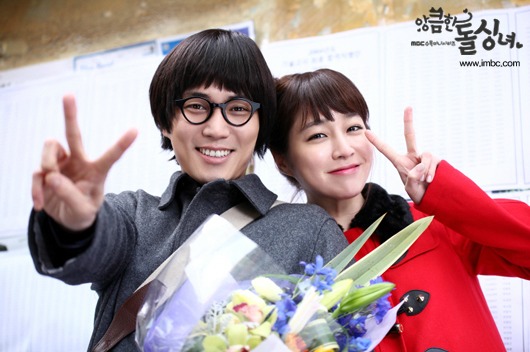 I just got unnecessarily excited upon first hearing that Lee Min-jung (Come Back, Ajusshi) and Joo Sang-wook (Fantastic) are reteaming to play another dramaland couple for a show titled Fate and Wrath, because they were so charming and sweet in Sly and Single Again. In that drama, they played an adorable couple that was married, divorced, and then fell in love again. But before we get too attached: This new project is a weekend SBS drama described as a “conventional melodrama” — so, big on the dramatics and high-running emotions. Sorry to jerk around your emotions like that!

Fate and Wrath centers around four people who become entangled in a fateful love and an intertwined wrath, creating a trap that becomes impossible to escape. The drama purports to be a “strong melodrama” that depicts their heartbreaking love with a realistic lens. We don’t have much else to go on, but the series will be produced by the company that produced the quintessential makjang melodrama Wife’s Temptation, as well as Lovers in Paris and Family Honor.

I’m a bit sad that we won’t get to see Lee Min-jung and Joo Sang-wook being cute and happy again (look at how much fun they had in Sly and Single Again!) but I do admit to having a soft spot in my heart for reunited couples, whether in storylines or behind the scenes. Fate and Wrath will be a 20-episode series to premiere in November. 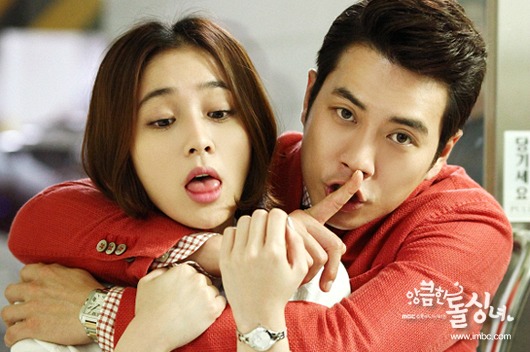 Via My Daily, Herald

I was already too excited for this reunion before I finished reading the news that it will be a melodrama. Sighs. They were so cute in Sly & Single Again!

A weekend melodrama... *groan* They can certainly pull it off. They made me cry in Cunning Single Lady (or Sly & Single Again). I hope the drama has some comedy because they were great at that.

I've heard very good things about this drama - Cunning Single Lady. Had quite forgotten I need to watch it.

Joo Sang-wook was excellent in GRAND PRINCE, the only drama of his that I've seen. He projected a commanding presence that belied the treasonous second prince Lee Kang's deeply-wounded soul. Facing off against him was Yoon Si-yoon as his straight-arrow younger brother. Lee Hwi's only interest was in fulfilling their deceased hyung's will that his 3-year-old son succeed him. The ensuing skullduggery was relentless, with many a twist and cliffhanger. JSW really delivered the melodramatic goods. He did such a good job portraying the villain, my mind boggles at the idea of him playing cute, happy, and charming. I'll have to check out SLY AND SINGLE AGAIN -- for research purposes. ;-)

Cute, happy, charming and geeky.
Truth. He owned the stage in Grand Prince.

I just finished watching ep. 1 of SLY AND SINGLE AGAIN / CUNNING SINGLE LADY... I've got whiplash already, and didn't even get to see that much of Joo Sang-wook playing the young techie nerd. ;-)

It's a solid drama. For some reason I didn't put it on my favourites, but it was close.
The rest of the cast is good too: L was great as Joo Sang Wook's secretary, and Seo Kang Joon was the interfering but charming second-lead.

Thanks for the cast info. Charming is good. Very good. ;-)

I did a double-take when I saw favorite associate judge L and favorite android Seo Kang-joon in the AsianWiki cast mugshots. ;-)

Yep, I actually thought he might end up making a better king than his brother considering he had things together. Too bad he was evil in the end. He looks so different in that photo above, I think I will have whiplash, too.

Lee Kang might have made a better king than Lee Hwi -- but only if we're talking about absolute monarchs, which was the direction he wanted to take. The fact that he flouted the rules of succession (aside from "might makes right) makes me think he would have cut other corners as well.

Hwi was a much better scholar, and I think he could have risen to the occasion if he had to.

@Hwi would have definitely been a much better and righteous King, but he was just too easily mislead. I am happy that he got stronger and a little bit (tiny tiny bit) cynical at the end.

I wanted to scream at my scream and just throw it somewhere every time Kang could pull one over on him.

Considering how situationally-unaware the Queen Dowager and her craven brother were, Hwi had to contend with overwhelming inertia when it came to steering the ship of state. (No wonder King Hyung kicked the bucket at a relatively young age. It was probably as much from exhaustion as a sickly constitution. I still think that he was slowly poisoned over a long period of time.) Hwi was dragging so much dead weight it wasn't funny. And even the yangban and ministers who were nominally on his side defected as soon as Traitorous Uncle and Kang looked at them cross-eyed. What a pathetic bunch. Arg!

Melodrama--I just may have to write a drama sequel for "Sly and Single Again" JUST because of this news.

Oo, oo, oo! Might that drama sequel be in the form of a cartoon?? Golly gee whiz, that would be great. ;-)

I just upvoted myself without meaning to. Honest, I'm not that vain.

LOL! I've done that more than once. So embarrassing. I thought there used to be a way to un-vote it by clicking the thumbs-up icon a second time, but that was before the site overhaul. And I may be mis-remembering it. I guess we'll just have to stay mortified by our fumble fingers. ;-)

They were so cute in Sly and Single Again! JSW's "I have... plastic flower... " (lovesickness) confession may be the most adorkable ever.

I can tell this won't be my cup of tea and I'll be skipping it, but I'm really glad to hear LMJ will be pursuing her acting career again.

This is like when Lee Da-hae and Lee Dong-wook had a reunion from My Girl to a complete makjang. :(

You're right! And since I've been there, done that... I'm not not making that mistake again.

*I'm just trying to convince myself that it won't be too makjang..😫*

Sly & Single Again was such a fresh low-key rom-com and one of my favorite! So sad that this is going to be a WEEKEND melodrama (probably with overly makjang plot?!)!

honestly just wanted to say that I'm so happy to see javabeans posting regularly and more drama news being on the website again :) site was getting so stagnant for a while it was missing it's mascot!

I hated her in the drama since she was so evill around the husband the first time, so just for that, I would be a little bit happy if he's cold towards her in the introduction part. Heee.

LOL, revenge in another universe! XD

awww I wish they'd do another rom-com, since they really do sparkle in that genre and JSW has already done a serious drama this year already.

I hope we're entering a trend of reunited couples. If somebody thought it was a good idea to regroup Suzy and Lee Seung Gi then there's got to be hope out there for others.

I'm really hoping Yoon Eun Hye has a big hit with her upcoming drama because her reunion with Gong Yoo is at the top of my list. The reunions of Kim Yoo Jung and Yeo Jin Goo as well as Kim Soo Hyun and Suzy are also up there. I would also love to see some '2nd Lead - Lead' reunions. A rom-com or melodrama reuniting Yoo Ah In and Park MIn Young would be great.

Wait, wait, wait! There's still hope!
"Realistic" was used in the description.
Let's think of some realistic melodramas we've watched.
Just Between Lovers, maybe?
This could be good.
*clings to a thread of hope*

Oooooh man. I really enjoyed them together so much. They were great. I'll be looking forward to this despite the makjang because I think they bounce off each other well. Lee Min Jung's worked with a bunch of great actors but i really think Joo Sang Wook is the on-screen partner for her lol. And her for him!

Erg. I so want to see them but "heartbreaking love" I don't think I can do that to myself. But I'll probably try anyway. Ha .

There are some actors you just want to do dorky comedy forever. For me, it's Joo Sang-wook.

Eeeeek! I got so excited for a second seeing Lee Min Jung and Joo Sang Wook in one sentence because they were so cute in Cunning Single Lady / Sly & Single Again, but a melodrama? T___T Oh well, at least make it a good one.

great news!!! I really liked them in Cunning Single Lady! I miss LMJ too!