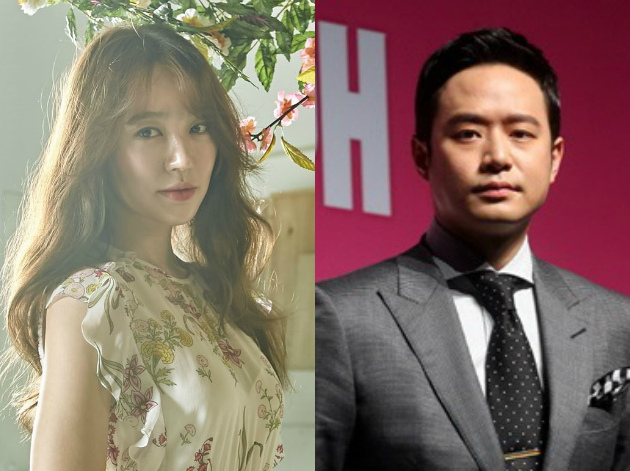 After five long years, Yoon Eun-hye (Mi-rae’s Choice) is making her drama comeback at the end of the month alongside Chun Jung-myung (Master—God of Noodles) in a cable rom-com titled Fluttering Alert.

The drama is based on an eponymous romance web novel with a familiar premise: Yoon Eun-hye will play top star Yoon Yoo-jung, known as the queen of rom-coms. All of her drama or film characters have happy endings, but in real life, Yoo-jung’s relationships have ended pitifully sadly. Ha! Despite her acting experience in the genre, she’s romance-illiterate — and the fact that she’s a bit of a love snob doesn’t help. She’s holding out for fate to unite her with the man who will sweep her off her feet.

Chun Jung-myung plays star doctor Cha Woo-hyun, the director of a dermatology practice. Despite women throwing themselves at him constantly (Woo-hyun’s described as having a singer/idol level of fandom), he’s got zero interest in romance or love. He remains unfazed by all the attention, and is an “iron wall” deflecting amorous declarations.

On the outside, neither Yoo-jung nor Woo-hyun appear to be lacking for anything, but in order to keep deep, personal secrets from becoming public, they agree to be involved in a fake scandal together. As the duo maintains the guise of a relationship, they come to understand each other and to learn more about love. Their shared experience will stimulate their ability to empathize with others, and they’ll even start feeling the “flutter” of romance.

Rounding out the cast is Han Go-eun (Should We Kiss First), who plays Yoo-jung’s very first manager and now the president of Yoo-jung entertainment company. She’s like a sister to Yoo-jung, and has mastered the art of keeping her star actress in check.

Yoon Eun-hye has largely kept out of the spotlight since her plagiarism scandal, and I’m rooting for this project to be the one that turns her image around. Despite her acting efforts, her last few dramas were duds or started out compelling and then dissolved into hot messes, so I’m hopeful that Yoon’s used the time off to hone her project picker; perhaps the role (and the meta opportunities of playing a top star!) will have audiences warming to her again.

Fluttering Alert will follow the conclusion of Devilish Joy on Wednesdays and Thursdays on MBN. It premieres October 31.

Thanks @awcoconuts. I liked Yoon Eun Hye in Goong/Princess Hours, Coffee Prince and Lie To Me, but couldn't stand to watch much of Missing You or Marry Him If You Dare. I was sad that she's not been in a show I can stomach for such a long time.

All the best with her choice of this project. May it turn her career around!

Well if people like Kim Hyun Joong and Park Shi Hoo can enter dramaland again after all of their scandals, YEH should be able to do so as well.
I loved her in Coffee Prince and I agree that some of her other projects were kinds duds so I hope this one works for her

I clicked on that link, can somebody even explain that "scandal" to me? She appeared on a Chinese reality programme and was then accused of 'plagiarising' clothes? What does that even mean?

Is she a fashion designer? Did she steal someone's designs? I don't know how you can plagiarise clothes.

There were photos released of her "original designs" with more established designers. And the similarities were uncanny.
As krampa said, her defense were quite arrogant which didnt sit well with knetz thus her laying low from projects for a long time. The backlash was horrible for her.
YEH was a host for some design show which is similar to Heidi Klum's. But I wouldnt call her a designer per se.

I remember that articles were released expecting her to apologize. But she stood by her original work or something and sounded arrogant to knetz.

Oh, right, so she was designing. At least after a fashion (pun intended). Rightio.

I could give two hoots about the knetz. They're the worst.

But I fail to see how this deserved a five-year hiatus when rapists and wife beaters don't miss a beat.

Amen to that! If people can forgive rape, I don't get why plagiarism is the issue...

I wonder why people always leave out Lee Jin-Wook name when talking about this cases. His case was shady af too but people are so in love with him and showering him with praise and all.

So it's basically Lie to Me From Another Star?

Mi rae was such a mess. It started fine, and went downhill. The ending is on par with Missing 9, because I can't decide which is worse.

I'm doubly scarred by Mi-rae because the premise was so great but the actual drama was... *stares at bald patches in my scalp from the hair-pulling*

I love her! My favourite actress. I can’t wait!

Been a while since the last time I saw her and I can't recognise her in this photo!

Me too. It doesn't look like her at all!

I think it's just the quality of the pic. I saw other pics and she still looks the same but a lot skinnier.

It's been so long since her last drama, longer because I didn't even bother with Mi-rae's choice, so I'm excited for this. I'm not too crazy about Chun Jung-myung because he's one of those actors I find rather uninteresting to watch but I trust in the power of Yoon Eun-hye's chemistry. Also, I only saw Han Go-eun in A Man Called god, so it'd be nice to see her in something again.

I miss Yoon Eun Hye, I'll always give her dramas a try. Marry Him if you dare was unwatchable, so hopefully this one is good.

The official drama title is said to be Love Alert.

I am so excited to see their chemistry. This pairing is long overdue since they were supposed to be paired a few times already but never went through cause of conflicting schedules. So finally!

I saw a video of them together and they already showed chemistry.

Woah, actually (part of) the plot of Devilish Joy is about a once-popular actress trying to come back after a scandal. Hope it works for YEH!

My baby girl is back❤️👩‍❤️‍💋‍👩

I'm happy to see Chun Jung-myung in a drama again !

Heart to Heart was so nice ! But Master : God of Noodles was not very well written. Revenge theme often is a mess in drama.

For Yoon Eun Hye, I hope it will be a success, because she waited for a long time to make a comeback.

Yes, I've been wondering when he'd be in a drama again!

She is a good actress, but she has picked very bad dramas most of the time, except for Coffee Prince. I don't know Chun Jung-myung. He doesn't look handsome!😂 But the most important thing is that he conveys feelings. We will find out.

Except Goong, The Vinyard man too.
Those were from her very first days...

I actually want to watch that Vinyard man... thanks for remind me

LOL you got me with that title. XD

I love YEH so much - Goong was my first kdrama (and I still have alot of fondness for it) and Coffee Prince one of my all time favourites. This pairing is so long overdue and I'm feeling the chemistry already!! I also love the fake dating trope so fingers crossed that this is as cute as it sounds.

Choosing a cable drama like MBN is a good choice for YEH's comeback after a long time - no big pressure on the rating, if this drama can get around 1% at least it's already decent. Hope this one will follow the success of Devilish Joy. I'm rooting for these two and I like the premise as well.

I'm not a huge fan of him but she used to make good dramas. She was the "kiss queen". No fake wooden kisses in her dramas. I haven't seen him in a lot of dramas. The last one I tried to watch was really corny.

I would like to see Yoon Eun-hye on the small screen again, but I'm not interested in the plot.
:(

I love them to pieces and I sooooooo wanna see them in a successful project ,
Please do it and be good pleaaaase

She was at her best in Coffee Prince....over a decade ago. Hope this drama does well for her.

I watched all YEH's Dramas and it's all DAEBAK!! yay! Unnie is BACK.B😍😍

seems kdramas current trend is actress with scandal and a man with some problem:D