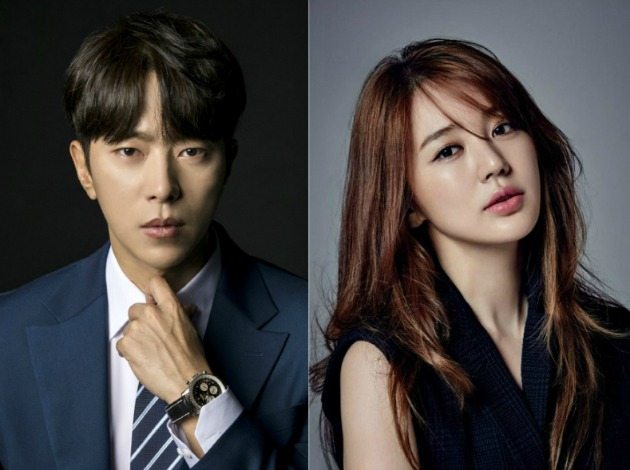 Huh, this isn’t a pairing I would have thrown together, but I’m willing to see how it works out: Yoon Hyun-min (Witch’s Court) is now in the mix to co-star alongside Yoon Eun-hye (Mi-rae’s Choice) in a robot romance drama titled Love Like a Person.

According to sources from both actors’ management companies, the castings are not finalized on either side, although both Yoons are considering the drama. As with the other two robot dramas we’ve already heard about (Yoo Seung-ho’s currently airing series I’m Not a Robot and Seo Kang-joon’s upcoming Are You Human Too), the actor playing the robot—Yoon Hyun-min, in this case—will be playing a dual role. The male lead is Han Je-woo, a neurosurgeon who reportedly died, but was then “reborn” through a brain transplant that gave him a brain supplied with powerful artificial intelligence technology. That is certainly taking the android premise a step further.

The character Yoon Eun-hye is considering is named Gong Joon-hee, a high school physical education teacher who is 100 percent emotion. She’s stunned when she runs into “the man she believed to be her fate” two years later, but he tells her that he has no memory of having loved her. (BECAUSE HE’S A ROBOT NOW?)

I’m not sure how I feel about this plot setup where Yoon Hyun-min is actually a robot (…cyborg?) rather than having the drama just confuse the heroine with a robot doppelganger. I suppose it’ll play with the question of what it means to be really human, and whether a human body with an AI brain can be considered a person.

Love Like a Person comes from PD Yoon Sang-ho (Saimdang, Light’s Diary) and plans to air in the early part of 2018.

Via IS Plus, News1

Yoon Hyunmin is on a roll.
Although the plot is worrying :/

Can't Yoon Eun-hye come back with a better drama or am I hoping too much for her?

I'm also hoping she got better offer. Slice-of-life melodrama like Just Between Lover would be amazing for her.

I just find it funny that YEH agency keeps saying "There are many offers that we're considering" but i just feel like this's the only one n they want to get people attention
anyway, love them n i want to see how it turns out even if it looks like a mess

Isn't it happens to the most casting news -like some sort of media play in order to create more buzz about the drama and castings? It's nothing surprise to see this, considering this is her comeback after years, she can't just straight away confirm or decline.

I would really love Yoon Eun-Hye to come back. I miss her.
I think both of them could be an interesting pairing but for now, the plot looks weird...
If they confirm, I hope I'm wrong about the storyline...

The plot sounds very complicated.. I'm not sure if it will work out.
Oh well.. let's hope for the best and prepare for the worst. 😊😊

I'm glad Yoon Hyun-min keep getting lead roles although I'm not sure what to expect from this plot! Still want him to reunite with Jung Kyung-ho and play some badass roles together!

Same I wish they could reunite in something and be badass brothers. I realised it would have been pretty ironic and cool if Yoon Hyun Min was in 'wise prison living' with JKH as a 'baseball player'

If he's a robot, then I wonder how this plot is gonna work out at the end. I already sense a melo in making? Why does she always keep picking the wrong dramas? :'( Do something like gong or lie to me again. :(

Yoon hyun min usually has pretty good luck with projects maybe if he's attatched it's be a good sign.?

wasn't he on the beautiful mind :P

She got in trouble with the fashion world. Shevwascaccused of plagiarizing designs. True or not I don't know.

Beautiful Mind was good though, despite of low rating.

hmmm.. ok.. i got super bored of it by ep 7.. and primarily because of female lead..

but good if they made sthg nice out of it

YAS even Beautiful Mind was good. Now just cross yo fingers for his luck to win over hers...

but i thot she is doing well for herself? She actually did well with her designs (?) no?

@alasecond
I'm talking about her dramas. I'm not exactly sure what she's doing outside of acting but she seemed to do well for herself in fashion.

He was but I remember him most from Tunnel and Heartless City. Jang Hyuk over shadowed everyone else in Beautiful Mind.

@katrina @alasecond Hahaha I love beautiful mind! Jang Hyuk and Park So Dam had awesome chemistry together for me, so loved all of it honestly. But yoon hyun min and jung rye won were so good together on witch's court, so I don't question his caliber at all, I am just skeptical of the robot plot, hope he gets to survive at the end, whatever it is upto with the robot.

I'm one of those who always wants a happy ending. So I'm hopeful. I didn't think I'd like I am Not A Robot. But it one of my current favorited

Love these two but not sure about the plot though??

Mmmh human-robot dramas aren't my thing I find them to be ridiculous but am thinking of giving it a go maybe it will prove me wrong ..hope for it to be another hit for Yoon Hyun-Min

I think Yoon Hyun-min should be cast in more lead roles, but I can't help but think this role wouldn't be a very meaty character to play. Also, the plot doesn't appeal to me personally. I've aready seen one story play out where a human falls in love with ai. , and it was really weird.

Actually it sounds quite similar to KBS drama special "My Happy Home" and it has potential to go very dark. It's just that I'm not sure they can maintain the story flow for 16 eps without making it very melodramatic or too complicated to unravel by the end.

Honestly, I couldn't make head or tails of the premise. If the doctor got a brain transplant and it is into an artificial body (cyborg), then how would YEH's character recognize that artificial body? If the doctor's brain is transplanted into another human body (presumably brain dead), then it makes sense that YEH recognizes the body. In the latter case, however, there aren't any robots involved?

If it is the latter case, wouldn't it be easier just to make this a story about a guy getting into a bad accident and has AI technology implanted to keep him alive - but the AI and accident erased his memories and personality? It would be fundamentally the same.

I like the pairing a lot, but can they ditch the robot theme already? I haven't even watched any of the robot dramas and I'm already tired of it.

Human with brain supplied by artificial intelligence, because saying genius neurosurgeon is too mainstream apparently. I have nothing against Yoon Hyun-min, but I've never been able to watch any of his shows completely. However, if this pairing happens, I would watch for YEH.

he isn't even exactly a robot right?
Its basically saying.. the man is about to die.. mom (in previous articles) decides to save him by stopping his brain from dying.. so voila we have a technical brain implant (or loosely AI)..

But since now brain is a technical/machine thing.. it controls the body accordingly (tear duct will function less, voice modulation will not transition into cacophony etc)..and ofcourse the goal of our heroine's life is to make this brain find emotions again.. or rather remind the heart that it can make some decisions on its own without being subservient to the brain

n conclusion is.. DON"T DO IT.. not after tunnel and witch's courtroom..its doomed!

Together they are a dream team! I really love this pairing, but the script has to be good. Yoon Hyun Min has an eye for good projects. I enjoyed Tunnel and Witch’s Court immensely. So I’ll trust his judgement on this.

Yay for this news, saw it earlier on twitter and thought I'll only believe it if it's on dramabeans. Not sure if it's not a bad sign that no writer is attached yet though.

I would watch for Yoon Hyun Min but Yoon Eun Hye kinda turn me off. I have nothing against her but I find her a very limited actress.

We just started the robot trend and I'm already exhausted. Can't we get something original ? Like robots taking over the world? Or robots secretly living among us?

"a high school physical education teacher who is 100 percent EMOTION".
well, so far it seems the role has been written for Yoon Eun-Hye, cuz in my opinion, she is one of the top dedicated actresses ever and when it comes to strongly emotional characters, she is one of the best. Seeing her cry in a drama has always made me run for tissues. But after all, I am worried about her! The idea of robots being involved in a relationship is not a lot of people`s cup of tea. :(
I just want the best for her and she deserves sth good after all these years. <3 I`ll wait and pray for her.

Ouch! Love them two but not as a couple..

Happy to see Yoon Hyun Min being very active this year, but I'm not sure about this new drama. The plot and the romance doesn’t sound exciting. A love between a human and robot??? Might be cool to see him tackling a dual role though.

His character was likable in Witch’s Court, but that drama overall wasn’t amazing. His character and strong acting in Tunnel was more impressive.

It might just be me but I think this sounds cute in an old-school romcom way.

There lies the comedic plot.. when we can't seem to figure out the story line.. This actually makes me excited! Isn't humor about disproportions and unconventionalities? "Love like a person, you robot!" Haha!