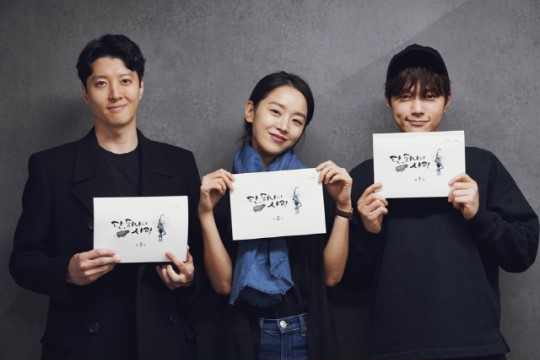 I love me a whimsical fantasy rom-com, and there are some elements of this upcoming drama that has me over the moon. The cast and crew of KBS’s Dan, Only Love got together back in January for the show’s first script reading, photos of which has just been released recently, and while this drama has flown completely under my radar, I’m definitely going to be keeping an eye out for it now.

In Dan, Only Love, Shin Hye-sun (Hymn of Death, Thirty But Seventeen) will play a cold and single-minded ballerina who somehow gets involved with a carefree, accident-prone angel called Dan, played by L, a.k.a. Kim Myung-soo (Miss Hammurabi). The title of the show is actually a play on the angel’s name, which can mean “only,” and without the reference to the character, the show’s title could be translated to “Only One Love.” Lee Dong-gun (Fox Bride Star) will be playing the charismatic artistic director of Shin Hye-sun’s character’s ballet company, who is highly gifted in his field. 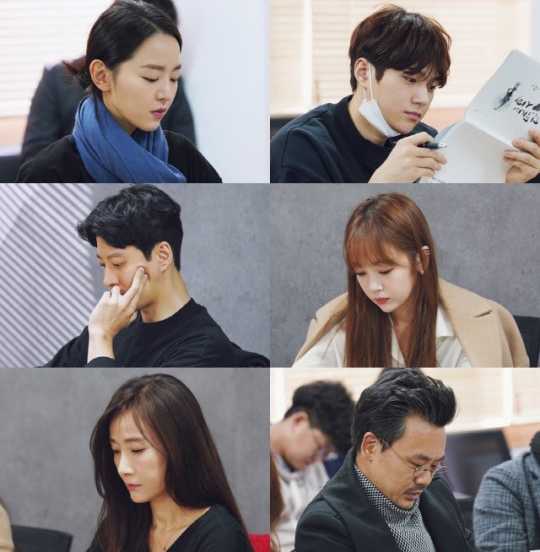 Supporting cast members include Kim Bo-mi (My Husband Oh Jak-doo, Man to Man) as a rival ballerina, Kim In-kwon (The Liar and His Lover) as Dan’s angel sunbae, and Do Ji-won (Bravo My Life) as the ambitious and formidable ballet company leader. Reportedly, there were also former and current professional ballerinas present at the script reading, and it’s heartening to hear that the show has recruited experts in the field given that the story seems to revolve around ballet.

I’m also pretty excited that we’re going to have PD Lee Jung-seob directing the show, since he’s been in charge of some of my all-time favorite shows like Seven Day Queen, Healer, and Hong Gil-dong. I love it when actors and directors from my fave shows reunite, and I look forward to Lee Dong-gun and Do Ji-won on the screen together again. I’m a little more wary on the writer side of things, since Choi Yoon-gyo’s only real primetime drama credit is Lucky Romance which… doesn’t spark much confidence. Let’s just hope writer Choi’s next entry in dramaland is a much more successful one.

Dan, Only Love will air in KBS’s Wednesday-Thursday slot and will premiere on May 15.

L as an angel, which is not the same as a fairy, at least not where I come from. ;-)

Thanks for the update, @tipsymocha!

You're right. My brain must've been mixed up for a moment.

By any chance did you watch MAMA FAIRY AND THE WOOD CUTTER? That might account for the confusion. The fairies in that show were immortals, and the last time I checked, angels are immortal, too. ;-)

I would be way more excited for this if L wasn't such a blah actor, but maybe he is the next Seo Kang Joon and will shock us all.

I actually have a soft spot for L from She’s So Lovable (it was terrible but he was endearing!) and Flower Boy Band, so with that and my love for Shin Hye Sun playing a disdainful madam (so into her turns in Legend of the Blue Sea and She Was Pretty), and my love for a noona romance I was set! ... but then you said Seo Kang Joon and I’m imagining what could have been!

Kim Myung-soo actually did a very nicely-nuanced job in MISS HAMMURABI. He was believable as a hardworking judge from humble origins.

Shin Hye-sun is ♥ in acting and drama choices. That balances out my nervousness from the Lucky Romance writer. *cross fingers*

Seven Day Queen is probably Lee Dong-gun's best work so far. I'm not surprised that the PD wants to work with him again. :)

I agree that Lee Dong-gun was terrific as Yeonsangun in SEVEN DAY QUEEN, not that I've seen many of his other works. I thought he did well in SKETCH, too.

Regardless of whether or not L will be more Miss Hammurabi or more Master of the Mask, I can't hope but think this cast looks beautiful together!

(I've also had a hopeless crush on Lee Dong-gun since Wolgyesu, so if he's a lackluster and unimportant villain here like in Fox Bride Star, I will lose my shit.)

I am excited!!! I have been waiting for a good fantasy rom-com. I hope this will be the one for the first half of 2019!