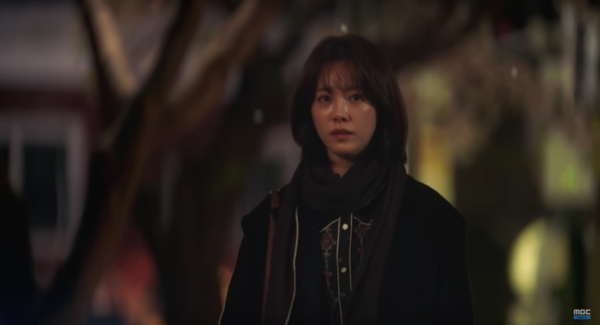 I usually associate melos with the fall or winter, but it looks like PD Ahn Pan-seok has another season in mind for his newest romance drama. This time around, PD Ahn and writer Kim Eun, who collaborated on last year’s Pretty Noona Who Buys Me Food, has moved to MBC for their upcoming drama One Spring Night. The newest teaser that’s been released, featuring Han Ji-min (The Light in Your Eyes), has a very similar vibe to the writer-director duo’s last outing, so it’ll be interesting to see what they bring new to the table with One Spring Night.

The teaser itself is quite short, if really atmospheric: Han Ji-min walks down a street lined with trees in full bloom, as Jung Hae-in, another Pretty Noona alum, says offscreen, “I won’t expect anything. So, please just let me see you.” Upon closer look, we see Han Ji-min with tears in her eyes as she looks up at the falling flower petals. One of the things I loved the most about Pretty Noona was the amazing soundtrack, and judging by this teaser, I’m hoping that remains the case in One Spring Night.

The synopsis of the drama is painfully brief and simple: The melo will follow the realistic romance between a solitary librarian and her pharmacist suitor. I’m desperately hoping that “realistic” doesn’t mean insane, elitist mothers, because I’ve had just about enough of that with Pretty Noona. The best part of that show was in the early episodes when the two leads were falling in love and getting to know each other, and if One Spring Night is more like that first half of Pretty Noona, I will be one happy camper.

One Spring Night will premiere on May 22 and will air on MBC’s Wednesday-Thursday slot. 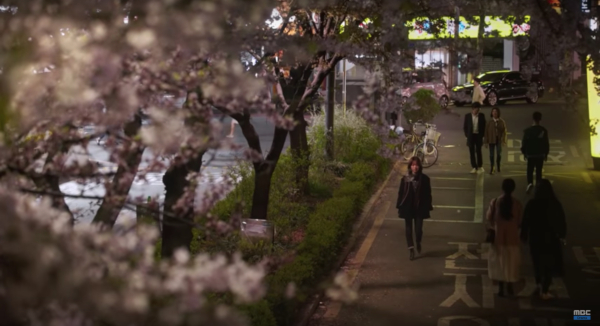 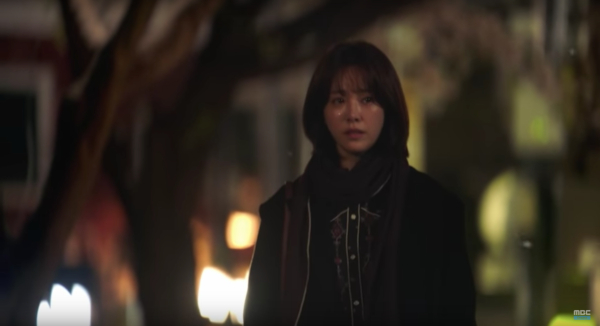 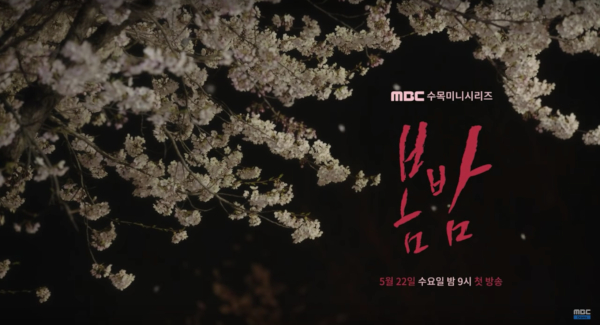 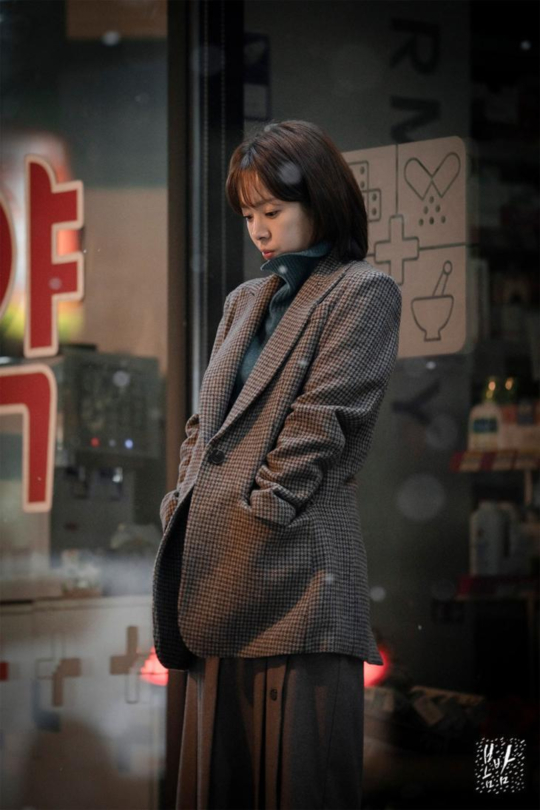 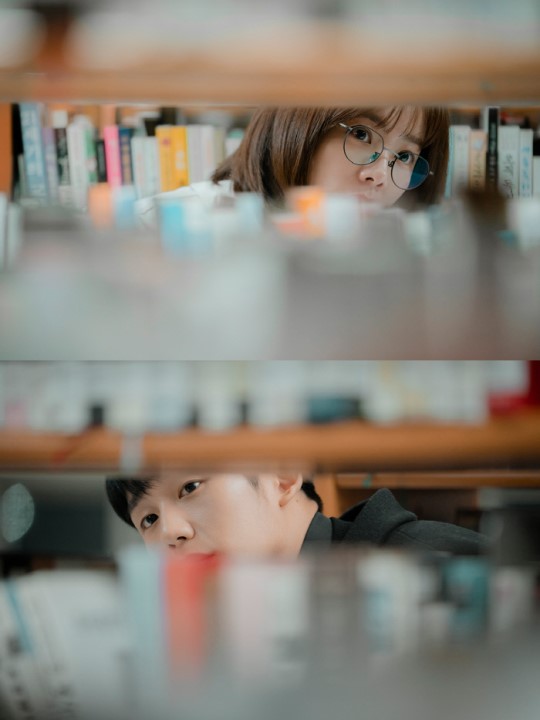 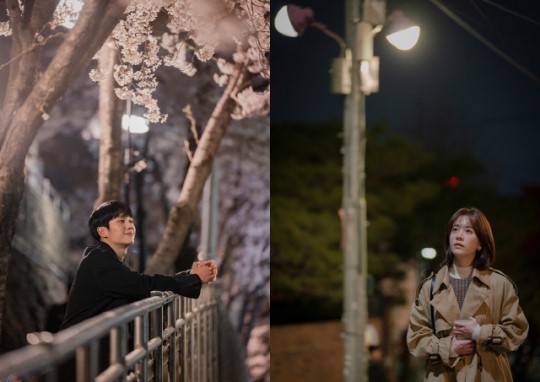 Considering all the rage posts about Pretty Noona, I will steer clear of this writer. Which is a shame, because PD Ahn and Han Ji-min are great.

Maybe the Writer has learned their lesson? maybe not...who knows

I love PD Ahn but I don't know about this writer. She is no Jung Sung-joo.

pretty noona was an exercise in like contained insanity. i quite early but i was pretty shocked at the turns it took for people. introspective quite dramas can be beautiful (JBL..) but damn lmao. i meant to check han ji min out and i should watch the light in your eyes. maybe this won't be bad....who knows LOL

I am hoping.... Pretty noona was a very solid story, just a bit slow, till it wasn't. Like a *Pretty* cake that was dropped right on the floor. I think I might have to catch this one after it's done airing.

I'd like to think this team learned something from the way Pretty Noona fell apart, but the music in this clip takes me right back to Pretty Noona. I'd like to give this drama a chance, but I'm afraid to get drawn in and disappointed by a bad second half. Maybe DB will do a series review?

It was hard for me to finish the last drama of this writer. I agree that 1st half is good but 2nd half takes a lot of encouragement for me to finish lol. I just hate the mother, most annoying i think in all of my kdrama watching. But i love PD ahn pan seok and han ji min's last dramas are so good that she is amazing in it even her movie Miss Baek. So i will give this a try. Maybe the writer improves who knows. I will cross all my fingers and toes lol

I loved all Pretty Noona. Yes, I hated the mother, but the story was not all about her, the growth of the characters was really well written. In the real life, we don't change just suddenly just because we met someone, it's more like up and down.

So I'm really excited to see this drama !

Still enjoying the afterglow of Han Ji-min’s performance in Radiant😊.
I’m wary of the Crazy writer of Pretty Noona ❗️

The music and the atmosphere in this reminds me so much of Pretty Noona that left such a sour taste in my mouth that I cannot drum up any interest in this. Add to that there are so many competing dramas that interest me more at the moment, I can't seem to like Han Ji Min, I think it's a mistake for Jung Hae in to be in such a similar drama back to back that I need to hear overflowing praise to give this one even a shot.

«One of the things I loved the most about Pretty Noona was the amazing soundtrack», you are not serious, right?????????????
There were a couple of original songs for the drama that were not that bad, but they abused them, although not so much they abused the "stand by your man" song that now I've come to hate with all my heart.

Wow, lot of strong negative feelings about Pretty Noona here. I thought it was excellent. I do think that part of the anger is about what people expected to get out of it. It was never going to be a wish-fulfillment fairy tale of a show. It's similar to the director's previous work (A Wife's Credentials, Secret Love Affair) in that it's complicated and difficult and sometimes painfully realistic. It doesn't relegate difficult subjects to easily-resolved side plots. That made it occasionally frustrating to watch but in the end I was pleased with how they handled the story. And (((spoiler alert)))) I actually thought the ending was good in that Jin-Ah gets to solve her problems by herself, in her own way. And that's what the show is about, Jin-Ah finally realizing that she has the right to forge her own path.

ANYWAY. I'm sure One Spring Night will be gritty and introspective and romantic. I'm excited.

Love PD Ahn's previous dramas A WIFE's CREDENTIALS, SECRET LOVE AFFAIR, HEARD IT THROUGH THE GRAPEVINE etc etc etc but this writer is not at Jung Sung-joo level yet.
Maybe I've judged her too harshly. My expectation was very high for a noobie writer so I'll give her a 2nd chance.

I watched both secret love affair and a wifes credentials reason why i adore this PD. I loved both and i had hoped that she is the writer in this drama. i think i am not that used to a more realistic plot and i am also used to great kdrama mothers reason why i really find the mother in SITR annoying. I hope the writer improves. I will also give her a second chance plus i love han ji min and this is her melodrama comeback so i am looking forward to this even if i doubt the writer. Please be good this time writernim😁

I liked Pretty Noona, but the 2nd half was painful. I did watch it all and enjoyed it but I could have done with some less painful bits. Plus I would have loved to throw the mother under a bus/train/car/anything... ahahaha

I found the soundtrack to Pretty Noona absolutely HORRIBLE, the whole reason I couldn't finish watching the show. LOL...I never even made it to the angst part.

If this is an attempt by the writer to make up for the pain he caused us with the 2nd part of Pretty Noona, I am all for it.

I love Ahn PD--Secret Affair and Heard It Through the Grapevine are two of my favorites--so I'll check this out, but I'm hesitant. I couldn't finish Pretty Noona, but hopefully this time around with this writer will be better....

I didn't realise this was written by the Pretty Noona team! They did a good job at building the romance between the two leads, I'm wondering where the melo part comes into play?
Is the pharmacist her ex boyfriends best friend?
Is this pre produced or filming weekly?

This is filming weekly unfortunately. I don't think the ex bf is somewhat related to the pharmacist. It is melo since i am sure the female lead will have issues having found a new love despite of having a long time bf, and the pharmacist being a single dad. I think this has more conflicts compared to PNWBMF.

Oh then maybe this will be better than PNWBMF with more conflict and plot to base each episode on.
Just in case, I think I'll wait until it's finished airing.

Please let all the parents be dead or happily emigrated in this show.