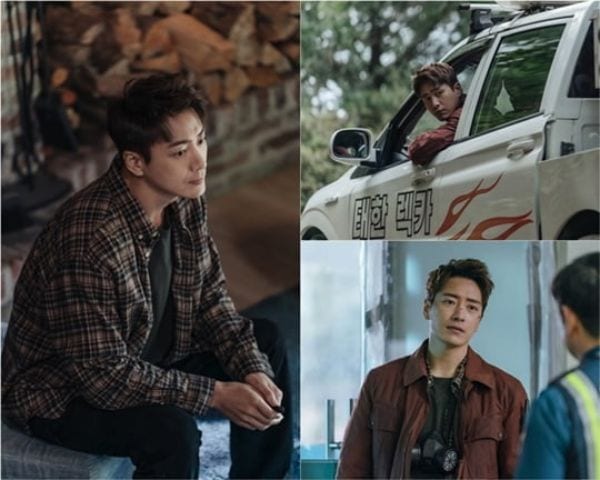 OCN’s latest thriller Dark Hole, featuring Kim Ok-bin (Arthdal Chronicles) and Lee Jun-hyuk (Forest of Secrets 2), has released new stills and a character teaser. When a natural sinkhole appears, a strange gas is emitted. Anyone that breathes the gas turns into a mutant, and then begins a lethal battle of survival between the mutants and the survivors that live amongst them.

Kim Ok-bin plays a regional investigations unit detective. The actress described her character as a “righteous individual who, amidst calamity, saves strangers and doesn’t give up on their humanity.”

She comes to Muji City, after receiving a call from her husband’s murderer. He was the only family she had left. In Muji City, she encounters the mysterious sinkhole, where she witnesses other citizens turning into mutants. She also breathes in the gas, but becomes the only survivor who doesn’t mutate after exposure.

On the other hand, Lee Jun-hyuk’s character, Yoo Tae-han, is a native to Muji City. He’s a reporter known for his sensationalistic and controversial content. The actor said he partially chose this project because he’s always had a love for movies, games, and dramas that had monstrous creatures popping out. In tribute to the game characters he’s played in the past, he wanted to walk the same arduous path.

The other reason he chose this project was that he thought Yoo Tae-han was very charismatic. He normally appears to be very laidback and playful, but he’s a strong proponent of justice.

His character teaser begins with him hunched over a dirty sink, with a bloody bandage nearby. As water drips, he looks into the cracked mirror at his injured reflection. A voice calls to him, asking Yoo Tae-han to save him. Yoo Tae-han recalls the pandemonium on the streets with mutants zombie hordes running amok. He picks up a rifle from the table behind him.

The next shot shows him walking like a lone gunman, as the mutants begin to run toward him. He says, “I will not let you just die.” Finally, the copy reads: “Yoo Tae-han, a strong survivor who does not fear death.” In the final narration, he says, “Mutant human survival, Dark Hole.”

Saturday-Sunday drama Dark Hole, directed by Kim Bong-joo (The Phone) and written by Jung Yi-do (Hell Is Other People), will air on OCN beginning on April 24. 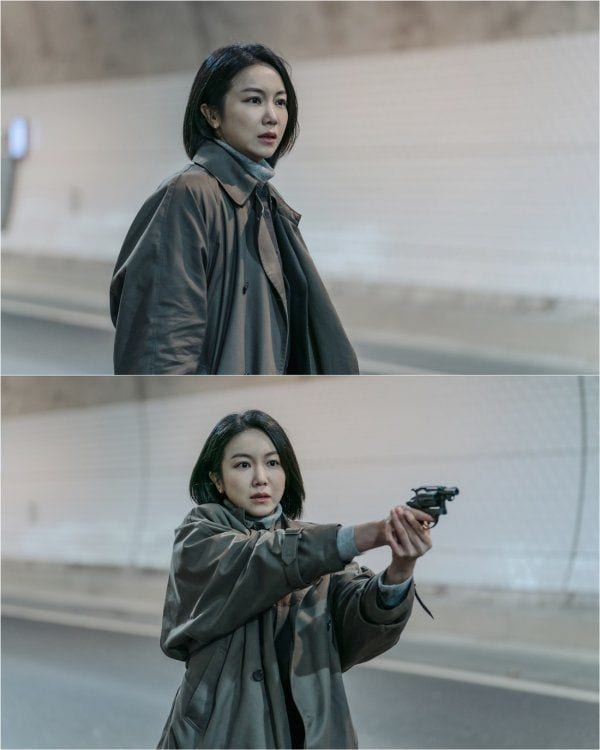 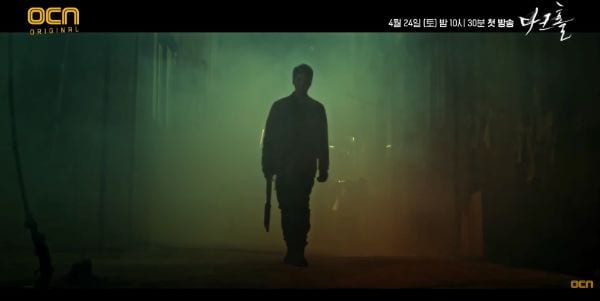 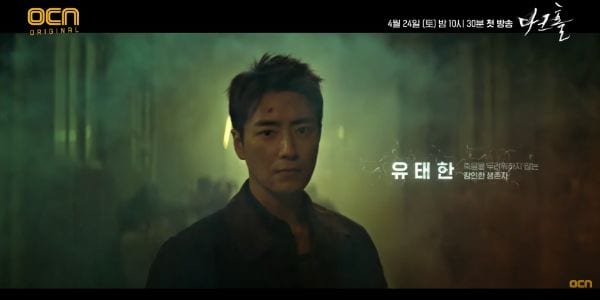 I will happily follow that jawline into a dark hole.

More rationally, zombie creatures are not really my cup of tea, but I've never watched Kim Ok Bin in anything and I love Lee Jun Hyuk, so I think I'll find the courage I spent on The Guest and check this out.

Glad to see Kim Ok-bin back in anything other than that one drama.

LOL that is over, the other one isn't.

My commitment to LJH will make me try and watch this, although monsters and zombies are not my thing. Even so, I usually trust OCN, so I hope I can stay.

Only if they give us relentless ab shots, and pensive looking shower scenes. I mean, hello all that dirt and grime isn't going to wash away by itself ;) Muhaha.

Oh! That would also been welcomed but with LJH I just die if he sweetly smiles. I don’t think I’ll get that, so shower scene will be welcome.

Ha, I was just teasing. Ah, the days when those scenes were ubiquitous lol!

I read that his character jokes, so maybe a slight smile? I'm also into action/heavy combat scenes so I expect plenty of that here :)

I taken a liking to Lee Jun Hyuk last yr and now. I am sure 'no one' else has mentioned this when it comes to him, but I wonder how it feels to be that attractive even in dirt/blood? Bahaha ;) His co-star Kim Ok Bin said her first impression of him in rl was "Wow, he's so handsome." Lol.

The thing that stands out here is that a film director directing this, as well as the 12 episode count. Hopefully, the story is concrete and the effects are well done. OCN lately has been stepping out their game!! Hope its good all throughout!!

If there's even the slightest indication of horror, I'll check it out. So this sounds right up my alley. An emphatic YES from me.

Man they both are so pretty my eyes will automatically block out the mutants on screen.

I read a tweet online that the characters barely interact/work together in the drama. I'm like huh? Isn't seeing the 2 actors who've never worked together what is grabbing viewers?

Call me confused. Did the script for OCN's DARK HOLE go back to rewrite?
Here is the problem:
Three weeks ago in this Soompi article:
https://www.soompi.com/article/1459885wpp/lee-joon-hyuk-sees-his-hometown-collapse-into-chaos-in-new-ocn-drama-dark-hole

Lee Joon Hyuk, on the other hand, plays a native of the town of Mu Ji. His character’s name is Yoo Tae Han and he works as a tow truck driver. He has an easygoing personality and likes to joke around, so he has a reputation as a bit of a slacker, but in reality he has a strong sense of justice. Although he no longer wears the uniform of a police officer, he remains proud of the time when he did. He also holds his own in the competitive world of tow truck business.

Now here is the description of LJH's character above:

On the other hand, Lee Jun-hyuk’s character, Yoo Tae-han, is a native to Muji City. He’s a reporter known for his sensationalistic and controversial content.

This description may be for another cast member. In the pic above it looks to me like LJH is looking out of a tow truck.
Anyway I am not going to sweat it. Being a big LJH fan I will be there. The good news is that DARK HOLE is on Viki (US)'s "Coming Soon" list.
(This means that I will be passing on Lee Je-hoon's TAXI DRIVER. I don't think I could take both DARK HOLE and TAXI DRIVER at the same time.)

Ooh! I was gonna say! I recall his character as having more jokey attributes?! Uhm what happened? I heard this was scheduled for early April, but that might be due to the CGI.

I preferred the tow truck driver aspect, I think it would've been a nice change from the constant reporter/prosecutor characters we see in crime/thriller dramas. Do K-dramas have an issue w/ having working class professions depicted for the ML's? The new change sounds more generic. But IA, I think it must be a mistake b/c I glimpsed a pic and he seemed to be fixing a car.

Ooh nice on Viki! Altho I had high hopes Netflix would take this since they usually do. Plus, it would give this show a big boost for I-fans/fan base.

Does anyone know if, some years ago announced korean zombie drama "Dreamcide", that is based on the web-toon Dreamcide, was ever canceled?

I saw Kim Ok Bin in Omniscent Interfering View/The Manager and she's so sweet & funny but also a total badass that does her own action scenes. If anyone is into incredibly slick action movies, I highly recommend The Villainess (2017).

Oh did she talk about this show by any chance or LJH lol? The Villainess got high praise from the John Wick crew, and they paid homage to the motorcycle scene! She has a black belt in jiu jitsu or taekwondo!

She's known for her fiery/attention provoking roles, so I always assumed she would be cold/serious. But it seems like she's a nice/sweet person (from her appearance) which is always good to hear!

Yeah, they filmed her working on Dark Hole and practicing action choreography. It was super impressive how fast she learns the moves. Sadly no LJH though, lol.

Oh yeah I saw an article about it! Impressive indeed. Meanwhile LJH is off in his cave somewhere when he's done working lol. After all the disappointing sci-fi dramas recently, let's hope Dark Hole manages to do well. Perhaps it being 12 episodes, and part of the cinematic universe bodes well?