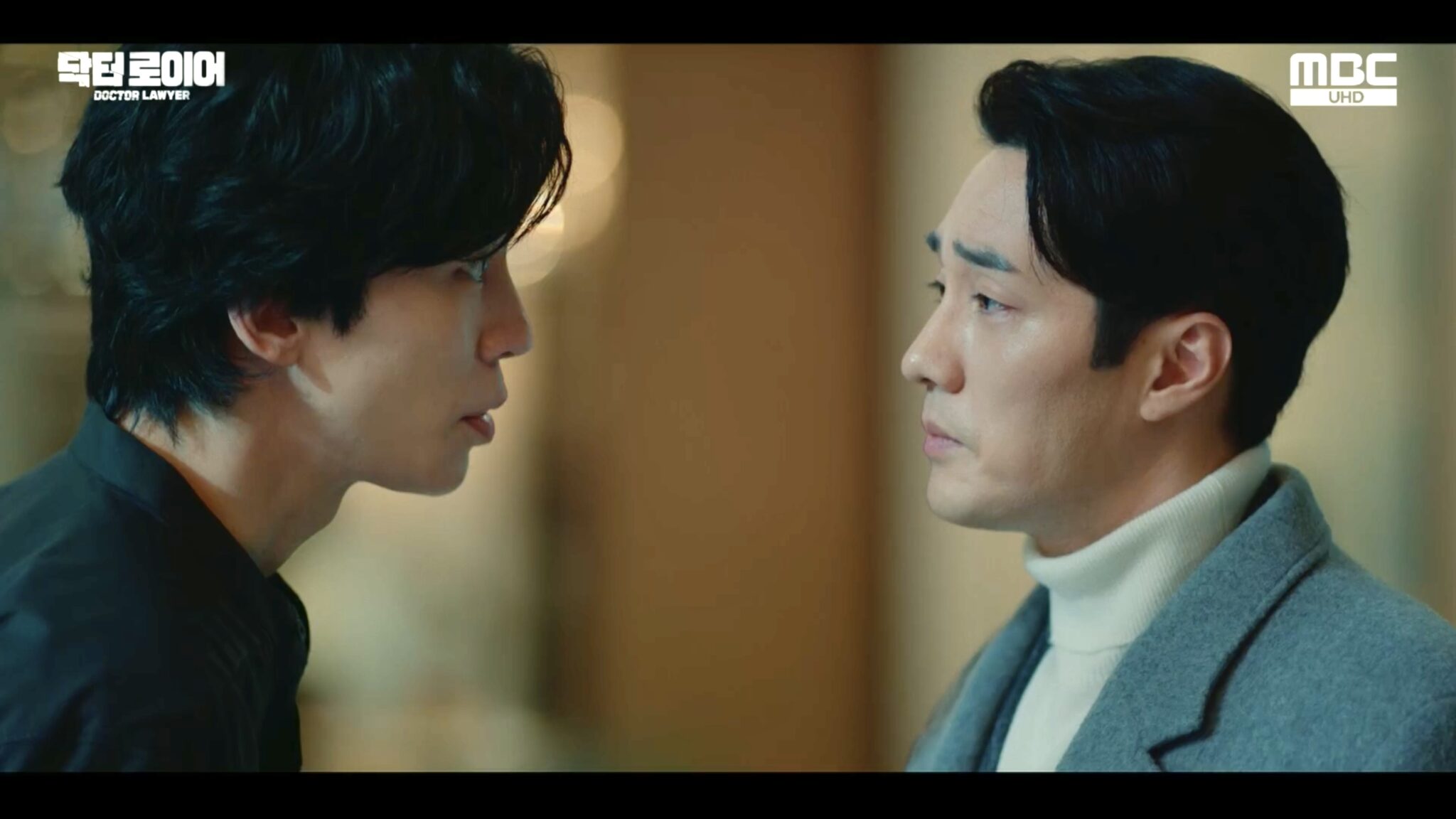 Finally back to being a doctor, our hero enacts a plan to save a life and secure a testimony. It’s going to be an uphill battle, but thankfully he has a solid support system of allies to back him up. 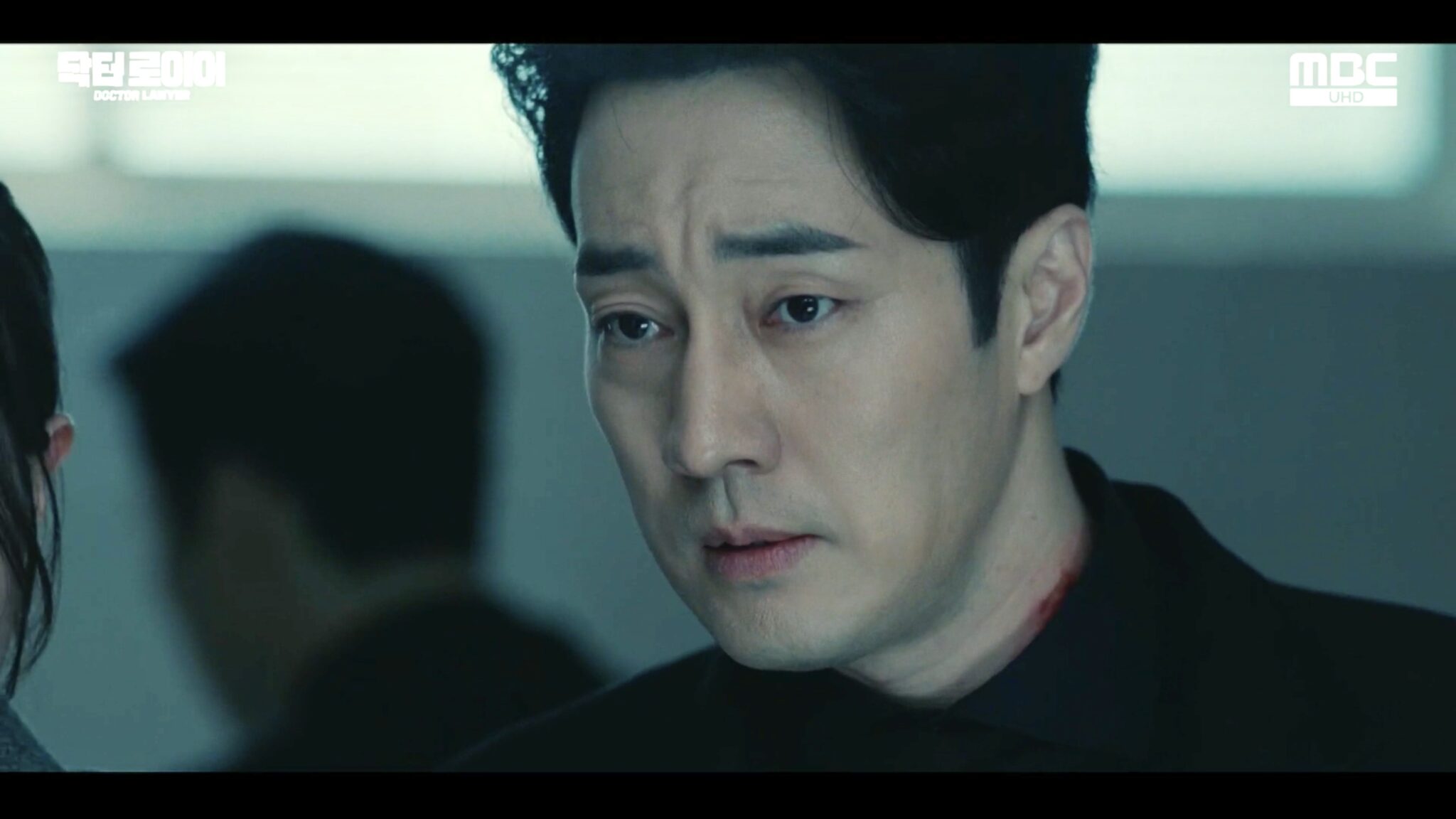 With the timely arrival of Hyuk-chul’s ex-wife Jung-hyun, the tense situation is diffused and Hyuk-chul is disarmed of his blade. The ex-spouses are united in their desperation to save their son, and they decide to put their trust in Yi-han.

Of course, Chairman Gu doesn’t take that lying down. Not only does he threaten Jung-hyun with her son’s life, but he also entices an overworked Yo-seob over to his side with promises of a secure position — as long as he cuts off contact with Yi-han. 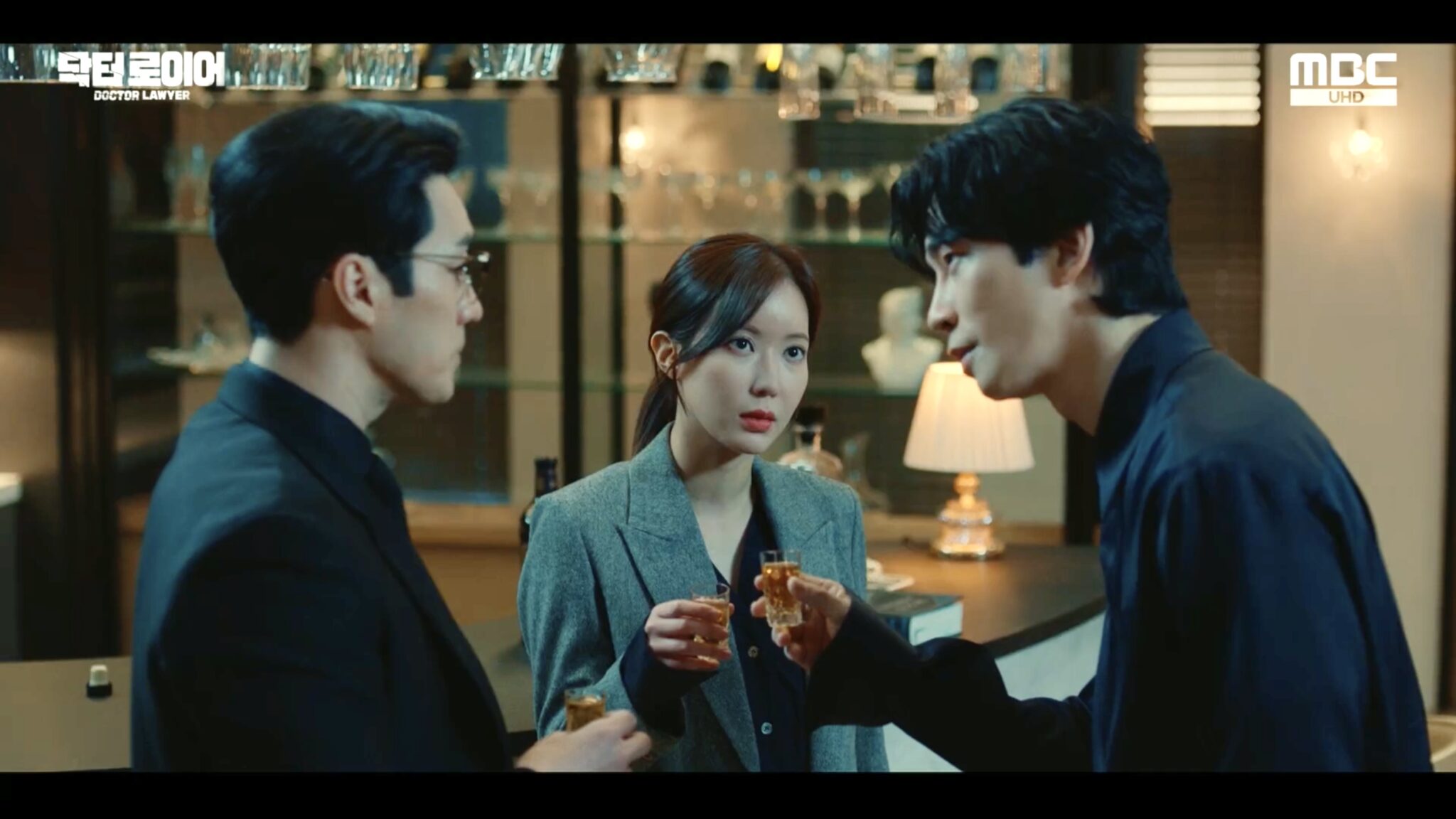 Suspicious of the newly-formed alliance between Yi-han and Jayden, Seok-young requests for a meeting with the latter. The pair visit him at his Banseok penthouse, where Seok-young confronts him with the bottle of naloxone she found.

In a surprise move, she smashes the bottle — she isn’t looking to arrest Jayden, but to figure out his motives. Amused by her boldness, Jayden reveals his plan of exploiting their fight against Chairman Gu to make Banseok’s share prices drop. With that, the three enter a tentative alliance to achieve their common goal of bringing Banseok down. 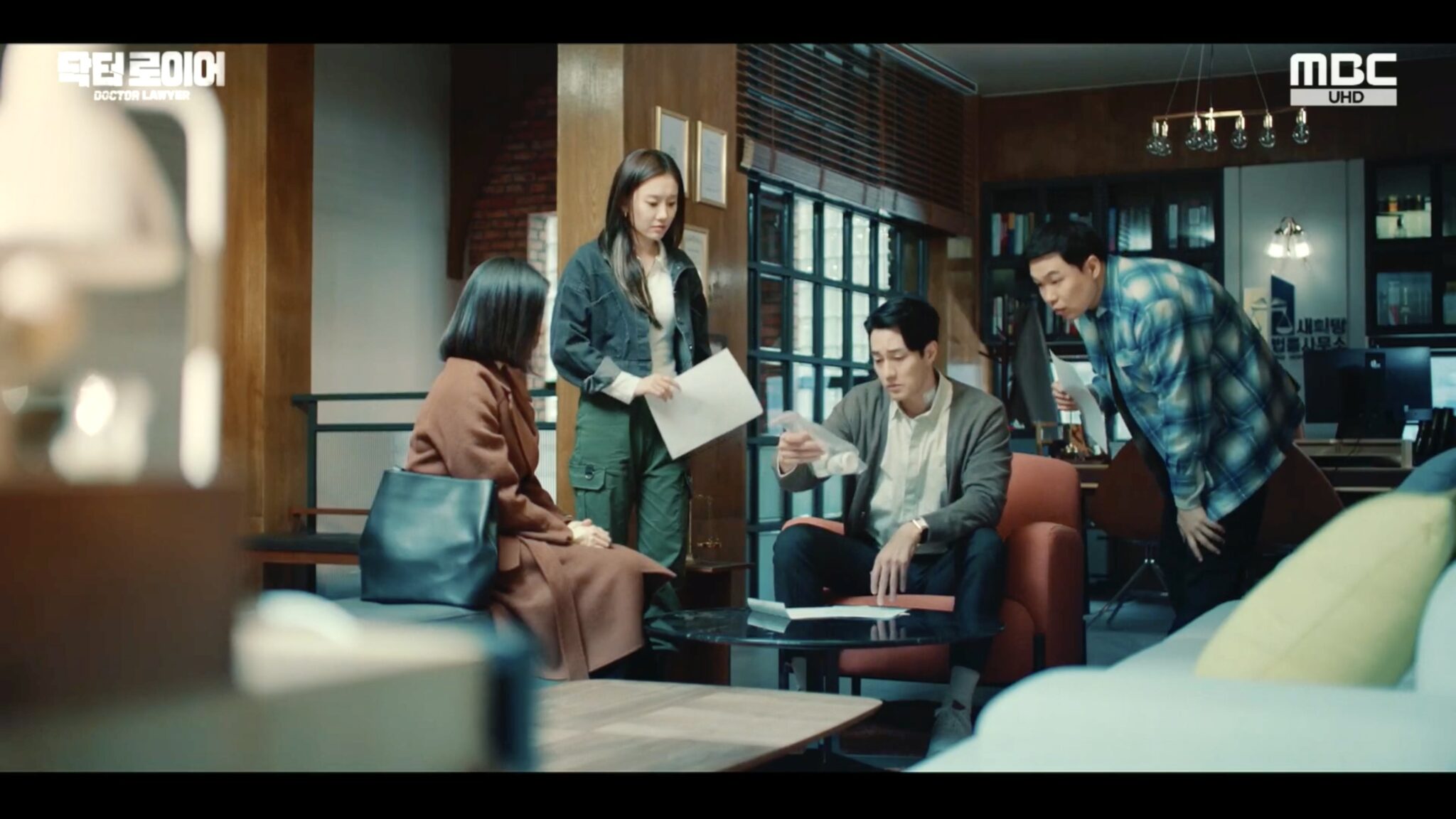 Yi-han successfully gets his medical license reinstated, and the next avenue he decides to pursue is the media. He meets with reporter BAN SOO-HEE (Seo Yoon-ah), and they exchange scoops. Yi-han tells her about Chairman Gu hiring Hyuk-chul to murder Ki-tae, and Soo-hee reveals that a presidential candidate may have illegally received a heart transplant.

That candidate turns out to be Yoo-na’s father IM TAE-MOON (Nam Myung-ryul); his records are squeaky clean, but Soo-hee found a bottle of immunosuppressants (taken by transplant patients) in his recycling bin. Yi-han passes the information along to Seok-young, who reels at the possibility that Candidate Im may have been the one who stole Seok-joo’s heart. 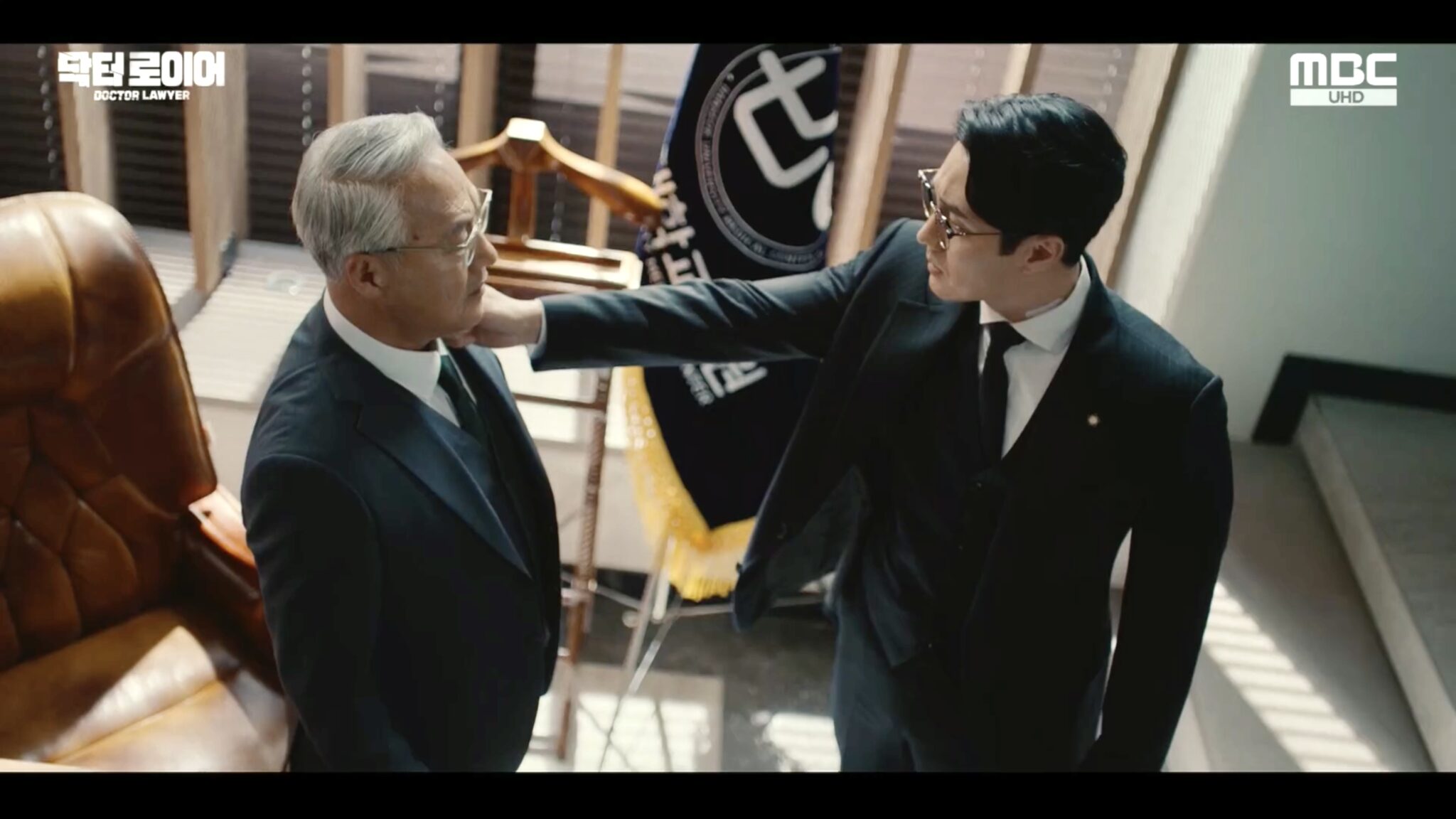 Jayden and Yi-han pay Chairman Gu a visit to discuss the stocks contract, except things take a dramatic turn within the first five minutes when Yi-han suddenly pulls out Hyuk-chul’s blade and nicks Chairman Gu’s throat. Everyone is shocked, except for Jayden, whose amused smile is pretty much the equivalent of eating popcorn at the movies.

Chairman Gu obviously can’t call the cops on Yi-han without implicating himself, so they proceed with the discussion. Jayden boldly amends the contract breach penalty to an astronomical amount of one billion dollars, and Chairman Gu signs.

Before Yi-han leaves, Chairman Gu extends a pretense of an olive branch — return to Banseok, and he’ll make him the hospital’s director in a decade. Yi-han says it like it is, calling the offer revolting, and leaves. 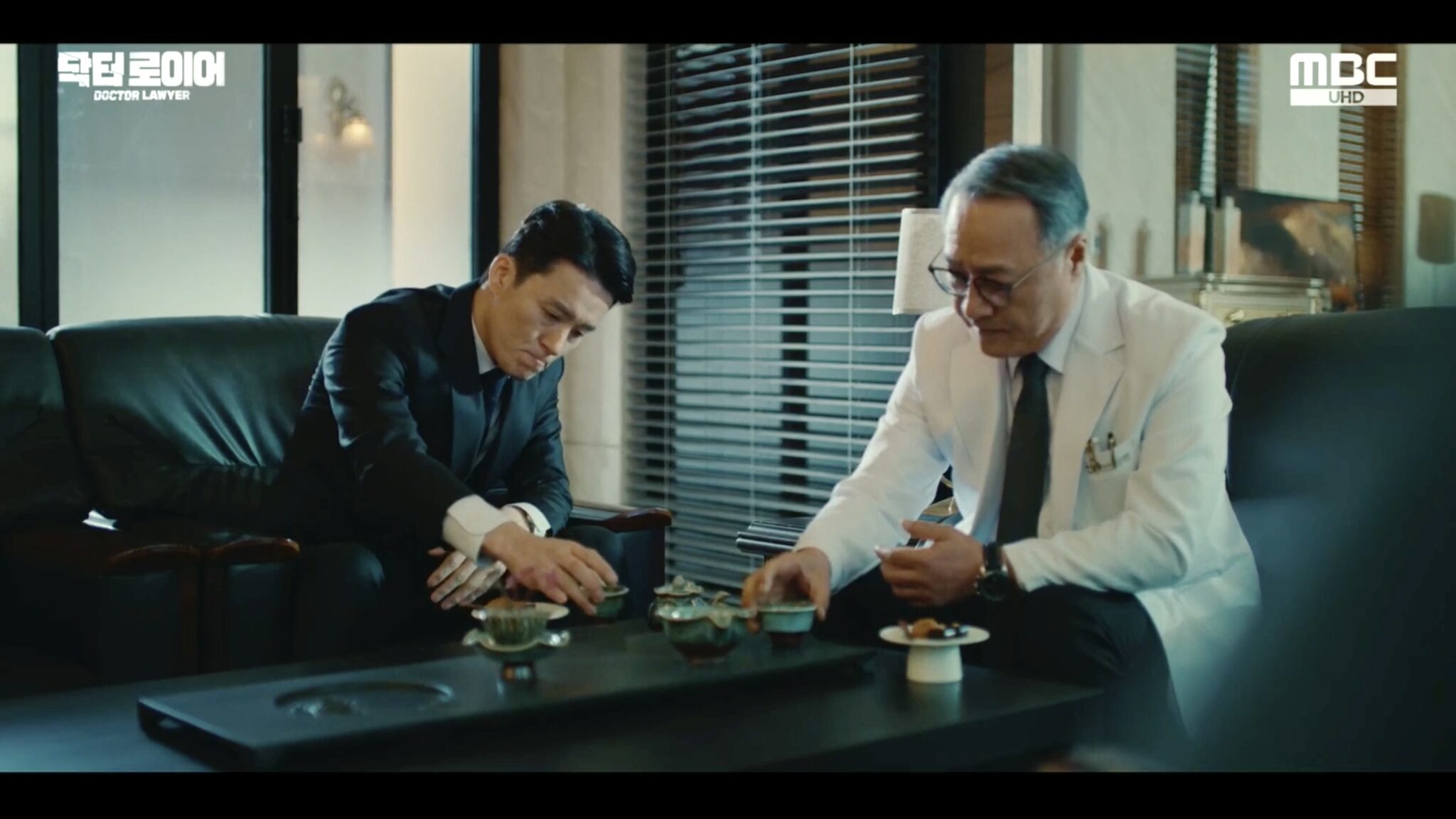 In other news, we learn that during the search and seizure on Yi-han’s office, Chairman Gu had called Kang-ho to his office for a cup of tea. Pretending to feel sympathy for Seok-young’s loss, Chairman Gu urged Kang-ho to make sure Yi-han loses his license for good.

That puts Kang-ho on edge when he finds out that Seok-young’s been looking into past investigation records, and for good reason, too. Seok-young’s beginning to uncover what seems to be an underhanded alliance between Chairman Gu, Assemblywoman YOON MI-SUN (Kang Kyung-hun), and her aide — who turns out to be the suspect who stabbed himself back in Episode 1. 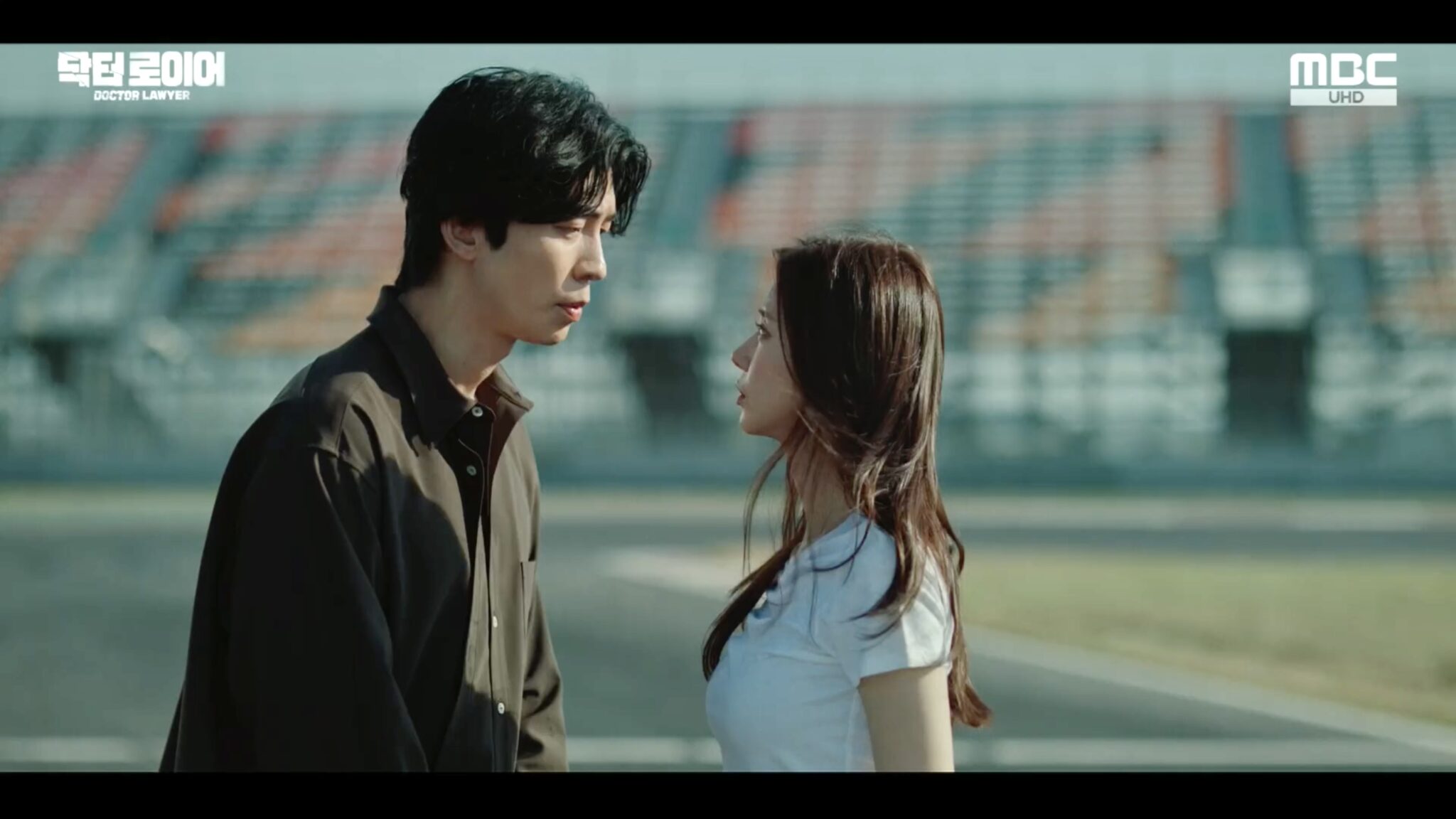 Hyun-sung pops the question to Yoo-na with a cliché and overwrought proposal, and Yoo-na pretends to look appropriately emotional. However, she declines — she’ll marry him once he’s surpassed his father. Ooh, pitting the incompetent son against the arrogant parent? Interesting.

Yoo-na’s sick of being belittled by the men around her, though, and she seeks out Jayden for a moment of escape. Luckily for her, he has just the thing in mind — a private racing track where she can speed to her heart’s content. (They almost crash, to the chagrin of Jayden’s aide, but thankfully they emerge unscathed.)

Jayden asks Yoo-na not to marry Hyun-sung, confessing that he loves her deeply — but he won’t propose to her. Rather than being someone’s wife, she should just shine brilliantly as herself. Thanks, Jayden, now you’re making me swoon too. 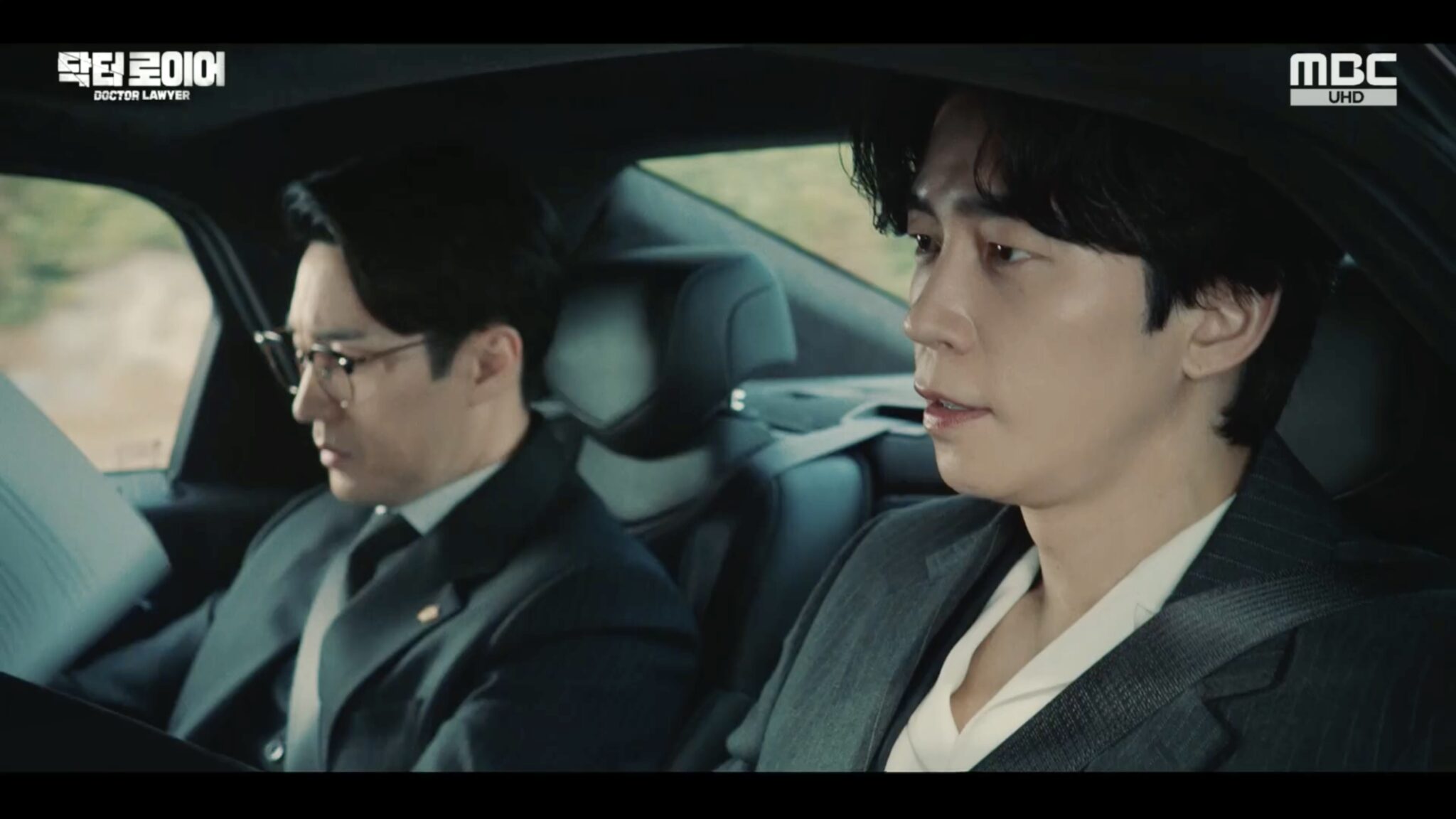 Yi-han’s clinic is slowly taking shape, thanks to Jayden and his unlimited budget for state-of-the-art medical equipment. That means he’s able to perform the surgery for Jung-hyun’s son, but there’s one problem remaining — they can’t get him discharged without Chairman Gu finding out and retaliating.

Which means it’s time to sneak her son out of Banseokwon! Yi-han enlists the help of Jayden, promising him that the plan’s success will cause a drop in Banseok’s stock prices. 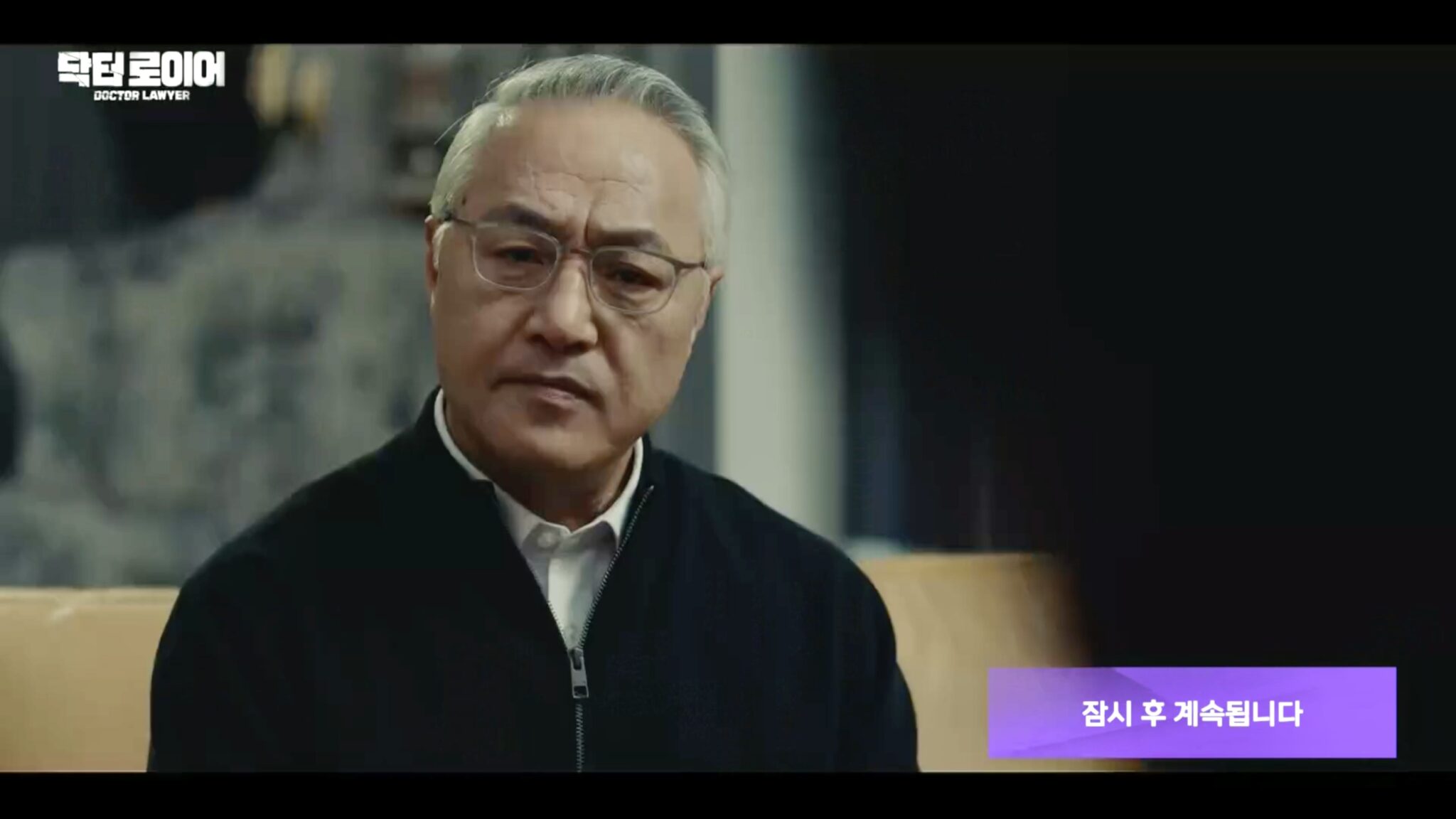 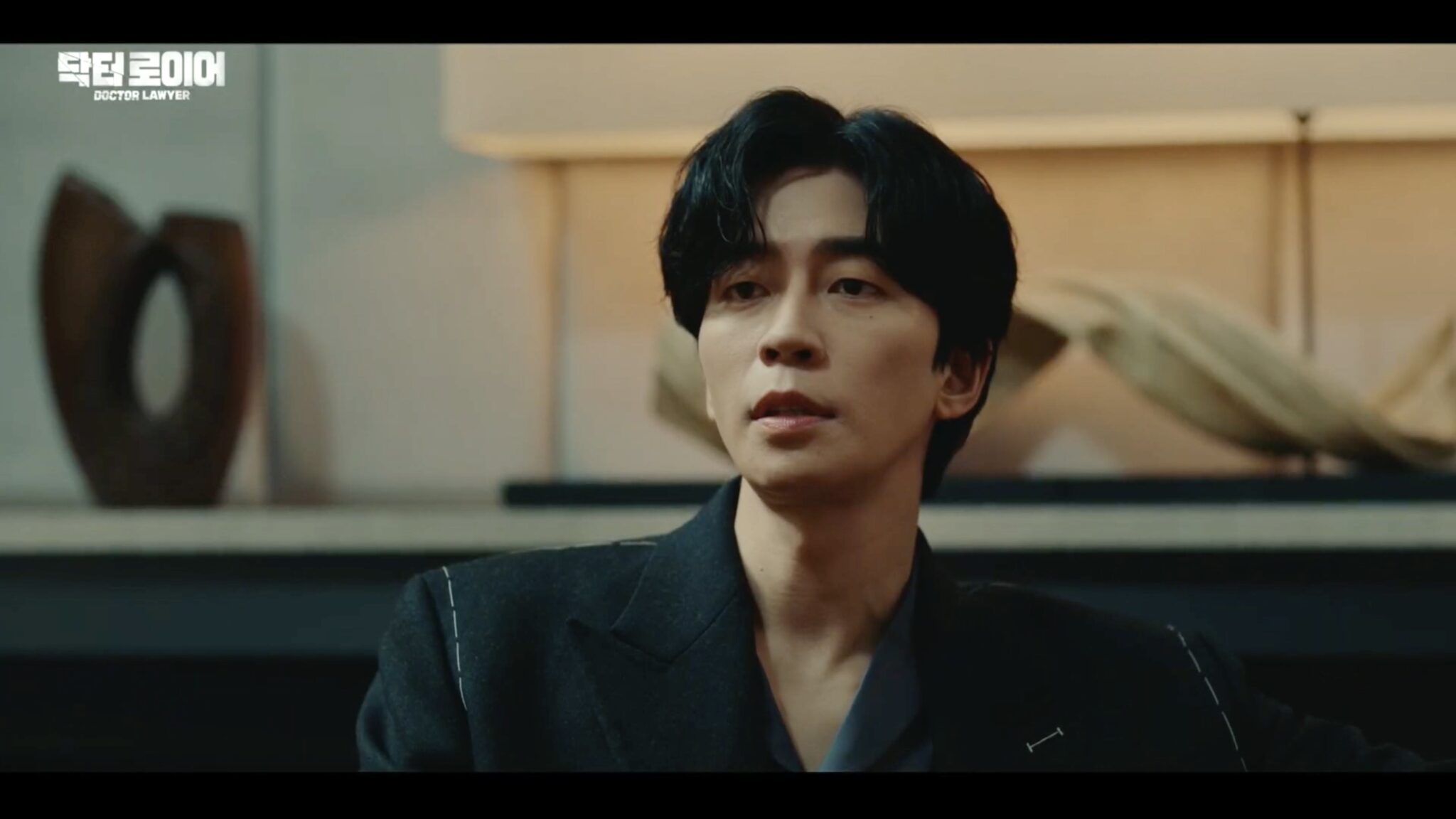 Except Jayden turns right around and feeds the information to Chairman Gu. What?? Chairman Gu is distrustful, but Jayden explains that he’s simply a business-minded investor; he wants more shares, but he can’t have Banseok crumbling entirely.

And so, Yi-han and his team are caught wheeling Jung-hyun’s son out of Banseokwon. Chairman Gu gloats in their faces, but Yi-han’s the one that has the last laugh — the patient on the gurney is a mere mannequin. Jayden’s helicopter is already escorting Jung-hyun’s son up, up, and away. YAY! 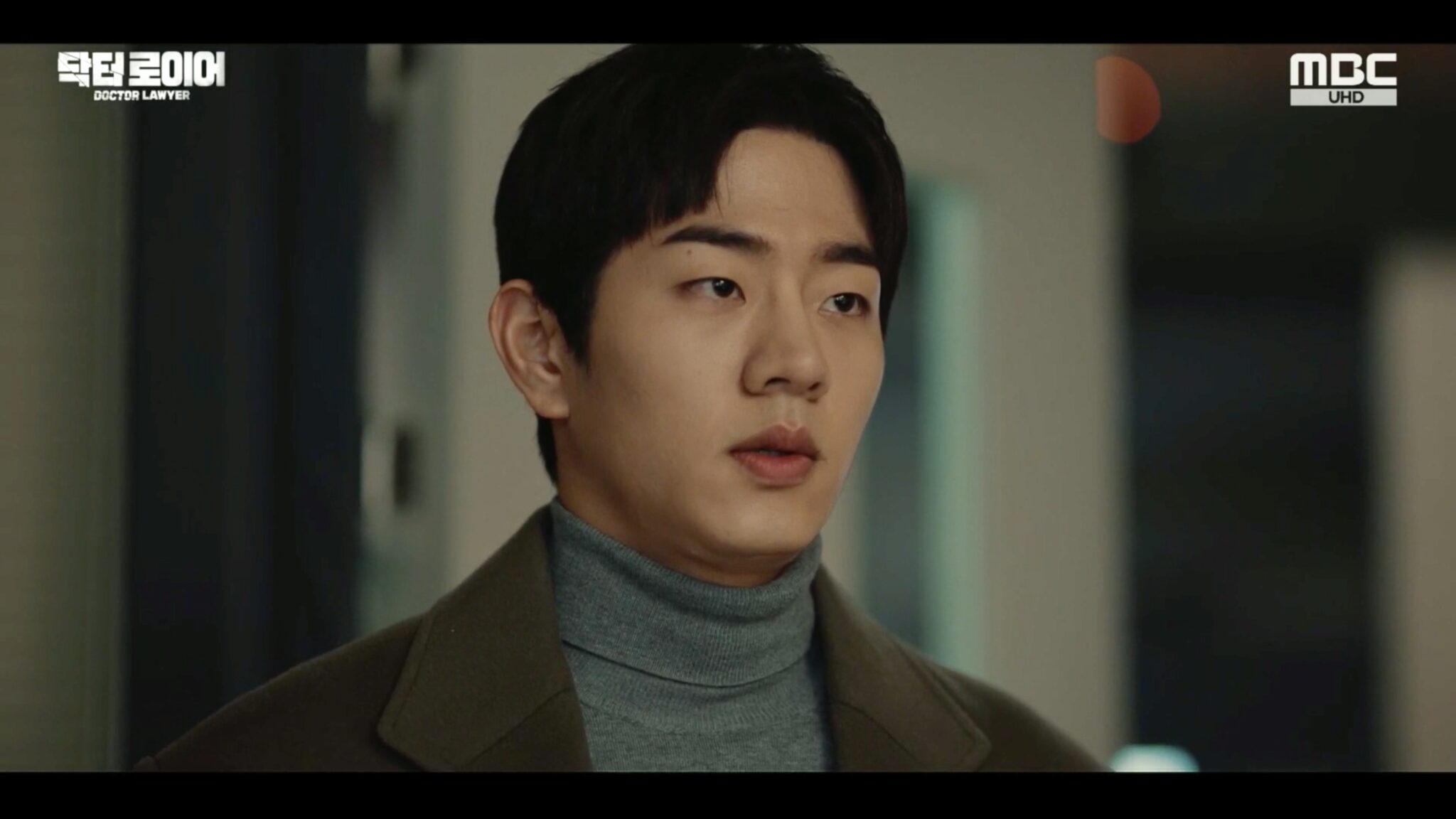 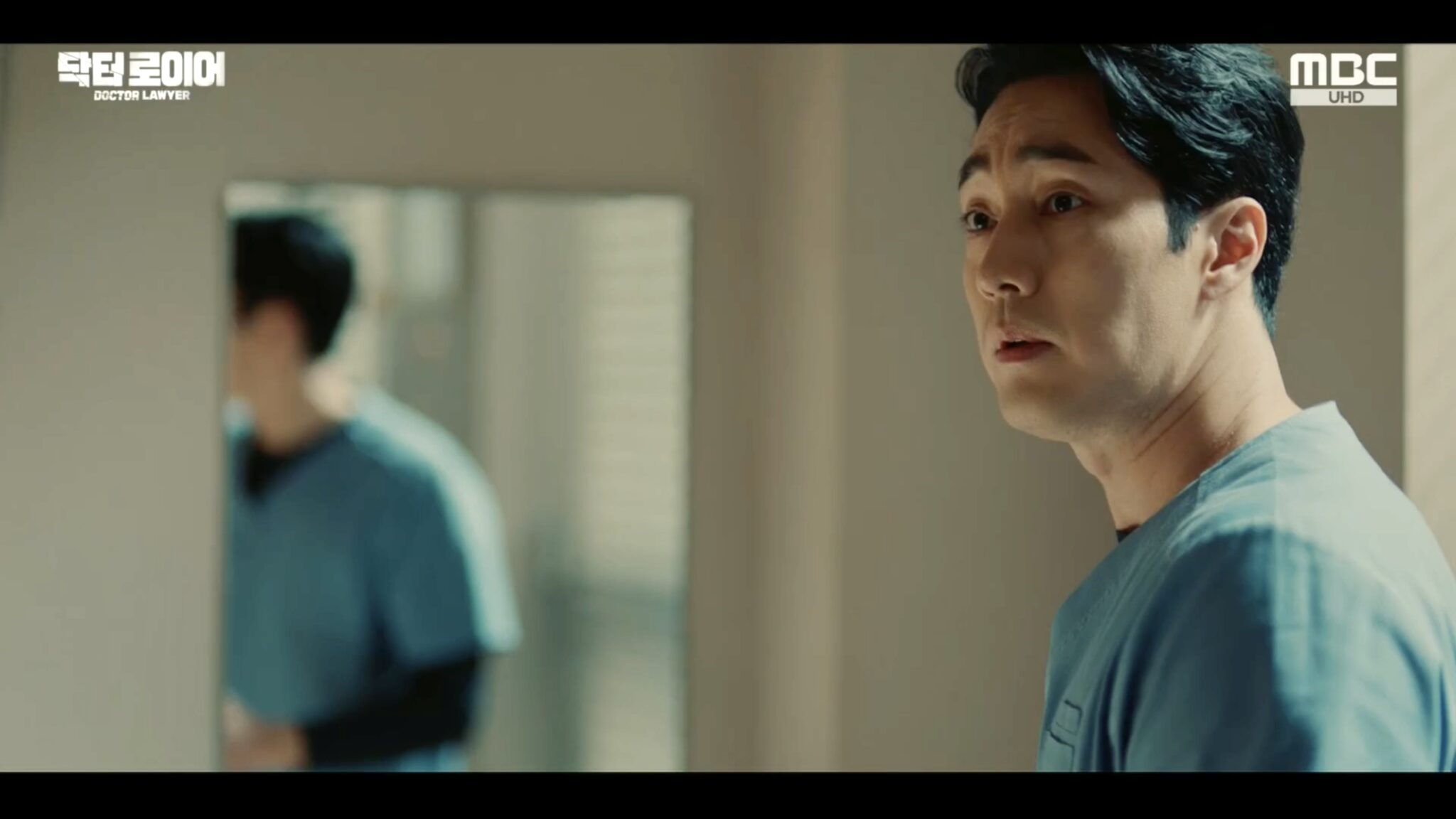 There’s just one problem, though; in the scuffle, Yi-han’s dominant arm was hit badly. Can an injured surgeon who hasn’t operated for five years possibly attempt a risky surgery?

The answer is yes, he can — with Yo-seob’s help! Aw, he did the right thing yet again. Yi-han’s injured arm shakes in the middle of surgery, but Yo-seob gathers up his courage and offers to take over. I’m beaming with pride.

The episode ends there, though, which means we’ll have to wait till next week to find out whether they successfully complete the surgery in time. Hyuk-chul’s trial is ongoing at the exact same moment, and they need to save his son’s life in order to convince him to testify against Chairman Gu. 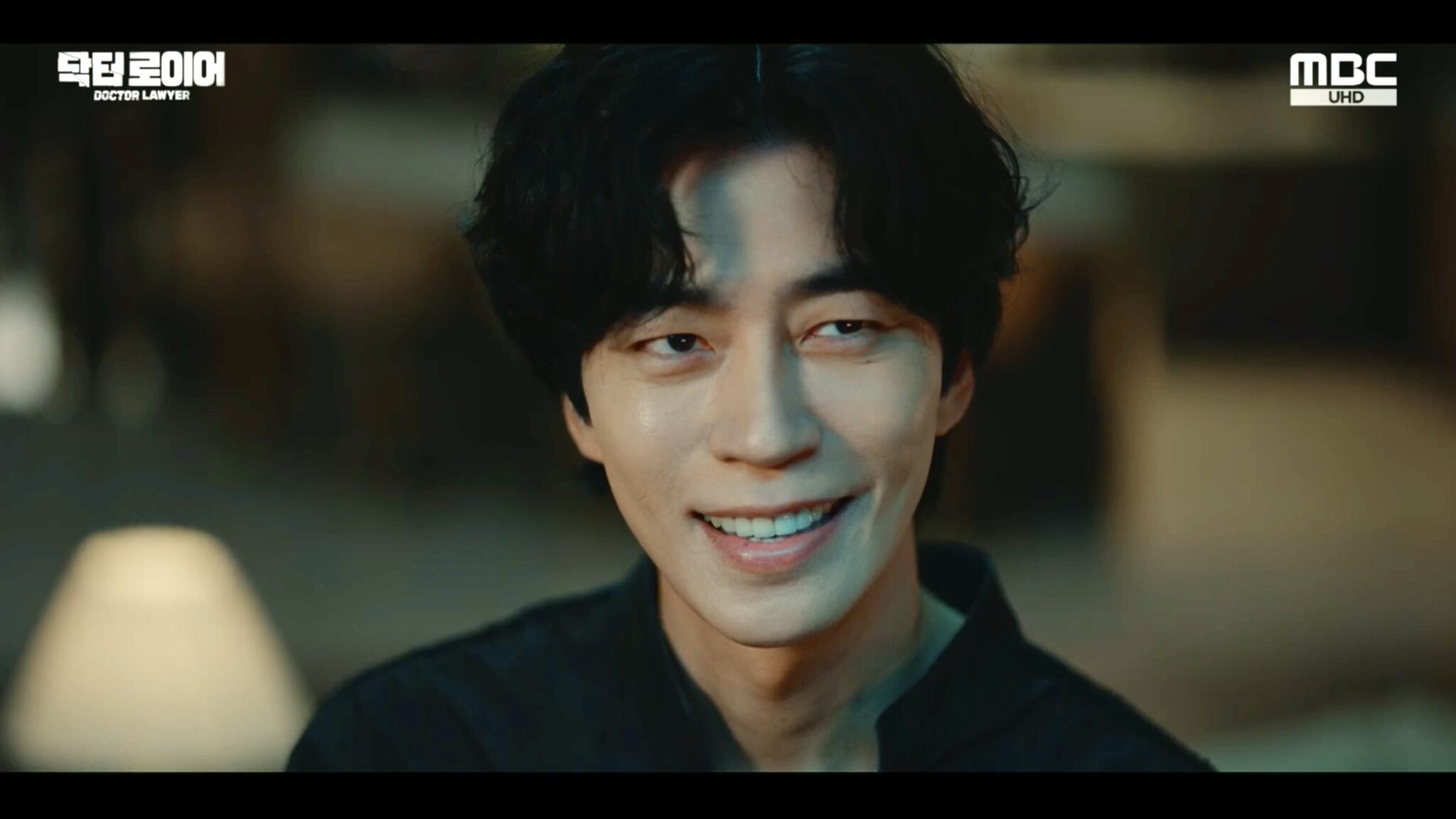 If I wasn’t already hooked on Jayden before (newsflash: I totally was), this episode solidified my interest in his character. I admit I actually doubted Jayden for a second there; I wouldn’t put it past him to reveal his true colors as a ruthless businessman.

I should really have had more faith in him, though, because look at that absolutely masterful deception! For all his theatrical showmanship and wily manipulation, Jayden’s surprisingly loyal to those he allies with — provided it serves his needs too, of course.

Or perhaps I shouldn’t be calling it loyalty; after all, any businessman worth his salt knows that credibility must first be built in order to secure successful deals. I wouldn’t be surprised if Jayden ends up pulling a fast one on our hero somewhere down the line, but this volatility is exactly why I love his character. 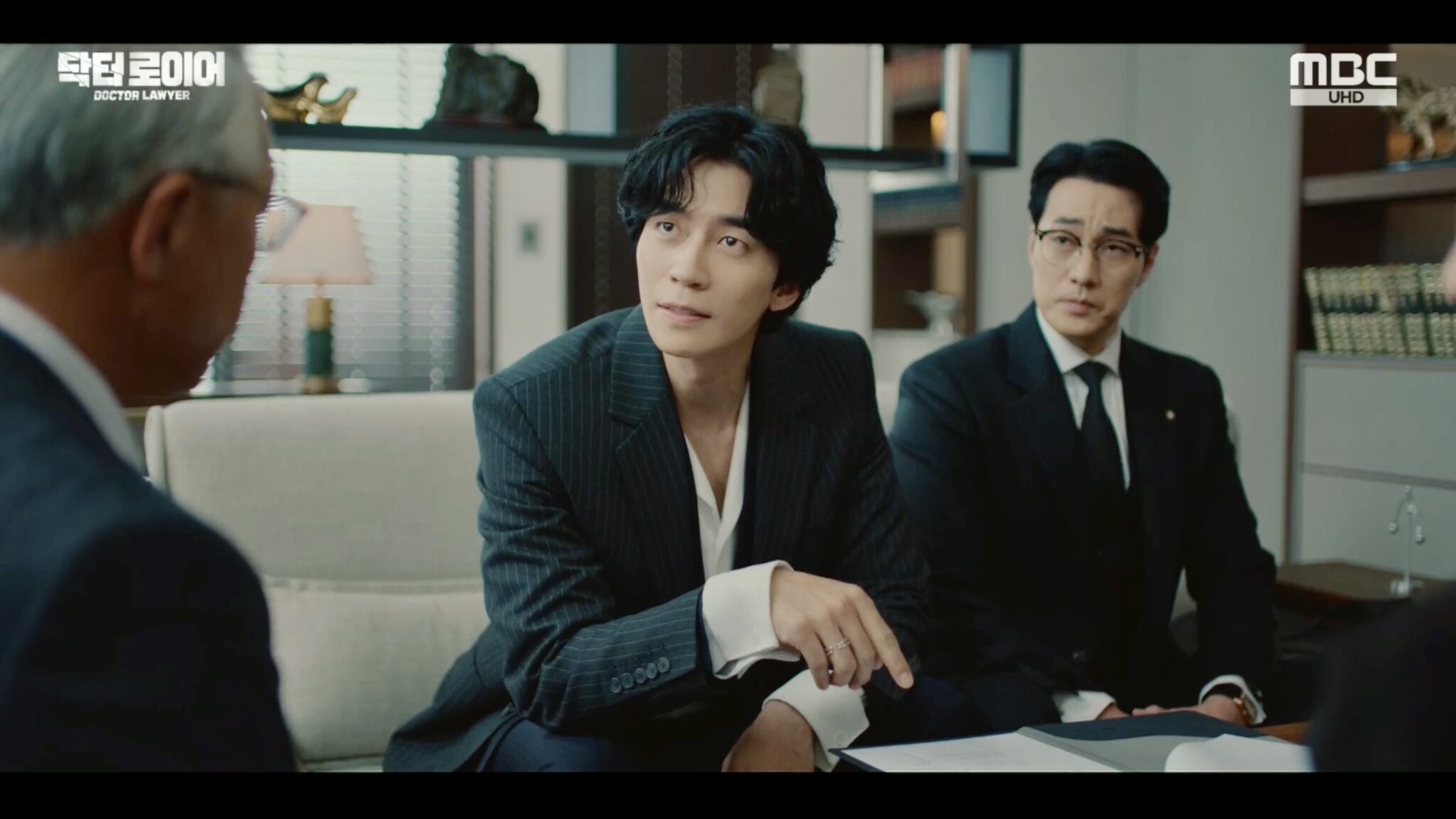 Rather than being someone’s wife, she should just shine brilliantly as herself. Thanks, Jayden, now you’re making me swoon too.

So he gets the "benefits" without the responsibility?

This was such nonsense, lol, I said sir, lies.

It is clear Jayden is using Yuna, but I am not really sure why. That being said the drama is puddling along. I am enjoying it for what it is.

I feel that jayden motive is more than getting chairman gu, he is trying to get yuna father as well. So excited, will the surgery be successful, or was the doctor who took over, subotage tgd surgery for chairman gu, or he will not. Chairman gu lawyer set up to rep accuse in cour cos yihan is not in court, haha, in real life court case, this cannot be done.
Ah...2 more days to watch ep 9, already ep 9, so fast.

All caught up. Been liking this drama. Michael's my fave! His mix of Korean + English cracks me up even more when we see his concerned/surprised reactions.

Gotta admit Jayden was convincing when he leaked the plan to Chairman Gu, but I'm glad he ultimately played his part well and helped pull off Yi Han's plan.