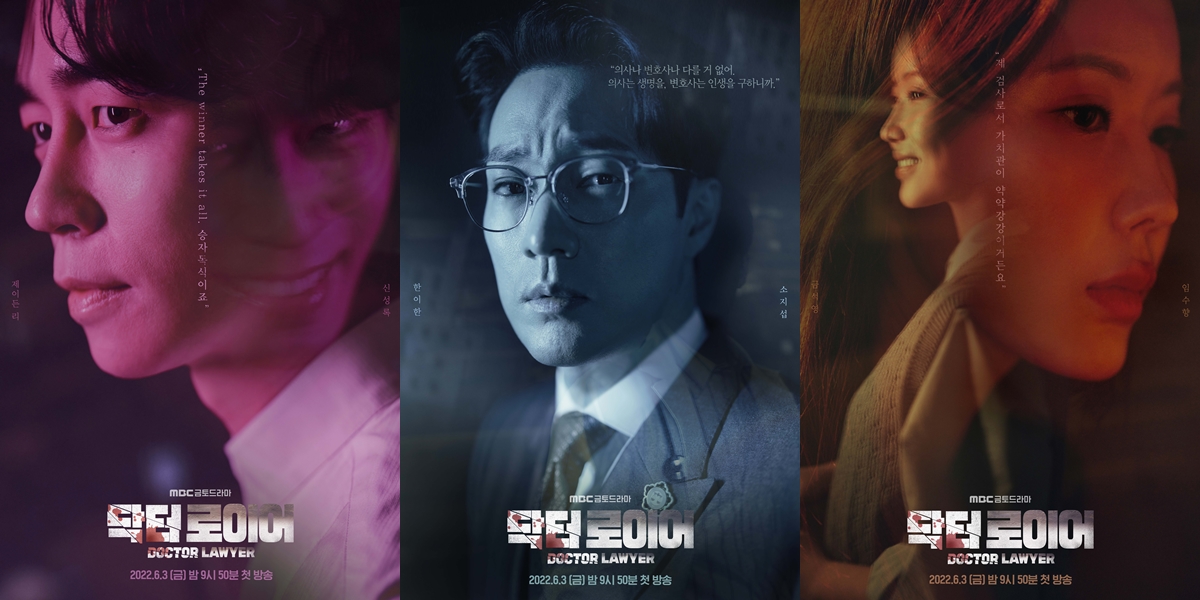 As we get closer to June, promos have been ramping up for MBC’s upcoming suspense drama Doctor Lawyer. Featuring the main cast, new character posters and a video teaser were put out this past week.

So Ji-sub (My Secret Terrius) stars as the eponymous doctor-turned-lawyer Han Yi-han. He was once well-regarded as a skilled physician in both general and cardiothoracic surgery. But when complications suddenly arise after a successful surgery, So is framed for malpractice and his license is taken away. Hell bent on getting revenge, So returns five years later as a lawyer who specializes in medical lawsuits.

Shin Sung-rok (Kairos) takes on the role of a Korean-American business man named Jaden Lee. How he becomes involved with So Ji-sub is not yet clear. But when So still worked at the hospital five years ago, Shin invested a large sum of money in the hospital’s foundation. Now he’s back to collect on his returns, but he’s got more up his sleeve than simply getting his money.

The third player in our story is prosecutor Im Soo-hyang (Woori the Virgin), who plays the character Geum Seok-young. She firmly believes that criminal rehabilitation comes from serving penalties and not from forgiveness or considerations. However, she is also passionate about protecting the wrongfully accused and will do her utmost best to prove their innocence.

The new video teaser begins with So Ji-sub in surgery as he brags, “You’ve seen it the most, me saving patients” and his colleague gives a thumbs up in return. However, the music remains ominous and So is shocked when he sees what hospital director Lee Kyung-young (Again My Life) is doing. Lee reassures So, “I promise, I will take responsibility for everything that happens in this surgery. Please perform the surgery.” While the others look worried, So replies, “I will trust you.”

We then cut to a drowsy So Ji-sub dropping his drink and passing out on his bed. Back at the hospital, a doctor calls So over for help and an alarmed So asks what’s happening. They try their best, but are unable to resuscitate the patient and So holds back tears as he solemnly pronounces the death. The teaser then jumps to So getting blamed for what happened. The judge sentences him with two years in prison, but with a two-year deferral.

An angry Im Soo-hyang confronts So Ji-sub afterwards, “I’m going to personally make sure that doctors who kill people but don’t pay for their crime are punished.” In the next sequence, we get a close-up of each of the main cast members, including Lee Dong-ha (Hospital Playlist 2) and Lee Joo-bin (Sunbae, Don’t Put on That Lipstick). The teaser comes to a close with everyone looking back to see So Ji-sub entering the court room. Shin Sung-rok gives a small smile as he drawls, “Han Yi-han, the medical malpractice lawyer,” to which So replies, “Why are you all so surprised? Did you think you would never see me again?”

Im Soo-hyang’s character description makes me a little iffy (it’s giving Ronald Reagan), and I am neither a fan of law nor hospital dramas. But alas, I love and miss Shin Sung-rok too much to not at least attempt a watch 🥲

You win. This is the greatest description of a character I’ve seen on here. You dropped this 👑 queen.

@it’s giving Ronald Reagan - who should not ever be forgiven for all kinds of sins- what? Don’t keep is in suspense?

@dncingemma: “It’s giving” is sort of a slang term for saying something gives off certain vibes. So in this case, rubytuesday saying “it’s giving Ronald Reagan” simply means Im Soo-hyang’s character is like Ronald Reagan, with her whole “tough-on-crime, no matter what” energy.

I hope I explained that well.

@ladynightshade: oh, how have I not heard this before? ‘Cause I’m getting old! That’s why. That comment flew over my head like a supersonic jet. Sob sob. So, you are hereby appointed (arbitrarily, sorry!) as my cultural and slang adviser! Thanks for the explanation, my always on the ball epistolary friend!

@dncingemma: Always happy to help out an internet friend! Although I don’t profess to being an expert in slangs as English isn’t my first language. But I’ll try my best whenever I can.

@ladynightshade: As though anyone can tell English is not your first language. You are a little wordsmith kiddo (said affectionately and not patronisingly!)

“…She firmly believes that criminal rehabilitation comes from serving penalties and not from forgiveness or considerations.”

Does anybody know if South Korea has mandatory minimum sentencing? Because it’s absolutely f-cked up if the main heroine, of all people, is a proponent of such unjust laws. I could go on a long rant about how the justice system in inherently flawed to the core, but I’ll spare you all my incoherent rage at the whole “tough on crime” ideology. All I’ll say is that I believe a fair sentence should be proportional to the crime committed.

Honestly, what’s the point of even complaining? The drama has Shin Sung-rok so I’m watching even if it’s the biggest garbage-fest ever produced. The things I do for that man…

I just picture Im Soo-hyang's Graceful Family character shaking her head at her prosecutor and saying" You have no effin' clue as to how the justice system REALLY works!"

@ladynightshade: Your rage is never incoherent and especially not here. According to some googled sources, yes, it does.

I doubt if her characters POV mirrors exactly mandatory minimum sentencing. Holding out hope through forgiveness and considerations prove to be the undoing of some offenders. That hope begot by mercy killed them. Had they served thier time while they might not have changed, they would have lived. This is what sentencing does at times. This is just one POV.
With regards to the story, I will see what they portray as "criminal rehabilitation comes from serving penalties and not from forgiveness or considerations.” - for offenders who and who didn't deserve such a lens.

I just read through what mandatory maximum sentencing is I definitely cannot stand with such.

Girl has 3 shows on air this year and I'm sure she's got other offers in the pipeline too.

I have never seen any of her dramas but i respect her aversion to unemployment.

Man, this comment section is just filled with zingers. “Aversion to unemployment” is brilliant.

I am rolling on the floor laughing at the last sentence!

too bad they couldn't have thrown in a couple of other professions in there and made the show "Doctor-Lawyer-Teacher-Accountant-Detective-Realtor." Then the drama would have had endless possibilities for exciting plot twists and turns!

@hacja: Bingo! I would love it if you write a guest Beannie post on this. Your first one still cracks me up.

But wouldn't that turn the ML into Chief Hong in Hometown Cha-cha-cha?

(I haaaaaated that show by the end.)

Right, you've made me rethink the concept.

Keep it doctor and lawyer, but have him, in a dramatic conclusion, sue himself for Malpractice so he can testify that the other doctor was guilty, and in the climatic courtroom scene, have him jumping back and forth from pacing in front of the jury to sitting in the witness stand, as he answers his own questions. He could even use different voices--answering as the doctor in a falsetto, for example.

That, plus a few earlier scenes of him wrapping a wound in a legal brief, and holding his case files together with surgical clamps, would drive home that he was not just a lawyer, not just a doctor, but a Doctor/Lawyer!

@hacja: I should have remembered to add ‘veterinarian’ to your ones. Imagine the (humanely elicited) animal hijinks they could draw on! A dog modelled on Lassie that can come and convey all sorts of info on dodgy ahjushis for a start!
Just in case you might think this is a tad outlandish, I once had a student who had finished their medical and veterinary science degrees and was studying to be a lawyer!

@dncingemma Why not go the full fantasy route--have the dog be a reincarnated doctor and lawyer. The show: Doctor/Lawyer/Dog

How very annoying😡. I keep sending them requests to add their Korean dramas in North America. Grrrr.
My daughter lets me use her D+ account since my limit is 2 streaming services and that’s Netflix and Viki.

got my hand on the turn on the show button!i am so excited for so ji sub to return and the bonus was shin sung-rok is in it too! i am sure im soo hyang will be great also! let it begin fast!!!

Interested in this drama. Not sure of the tone. Don't think there'll be much humor... Anyway, been a while since I've seen So Ji Sub and even longer for Shin Sung Rok. Looking forward to their match-up? Collab?

kdramas are so obsessed with givint doctors alternate employment..
so many doctors in past now Lawyer is also checked.. whats next Doctor Plumber or Doctor Tailor... ????
but So Ji Sub.. ill watch it.

Kdramas have identified (and suggested several solid solutions) for a well known problem: Doctors just have too much time on their hands.

You notice, for example, that they never have shows called Teacher/Lawyer or Teacher/Doctor. That's because teachers have only barely enough extra time for one thing: watching and commenting on Kdramas.

Romantic Doctor Teacher kim exists, that too with 2 seasons.

Well, sure. But you know that is a fantasy because "romantic" is linked with "teacher."

:-D :-D Why am I loving this comment section so much!

lol.. you took it in spare time perspective while i was thinking something else..
cause Doctors are Genius creatures (per kdramas) so they can Study and Master just any random profession with as perfection as Medicines.
and may be few years down the line.. new names will come..
Doctor Lawyer is now A Pilot

So Ji-Sub looks so handsome in the promos. I have missed him! Yes, he's my hands-down favorite. Does anyone know how we can watch this in the U.S.?

The show is not giving me full confidence in the plot but Shin Sung Rok and So Ji Sub are my indulgences! But what to do about Im Soo Hyang? I call her "One expression to rule them all".

I've only seen her in Woori, but her mastery of the total lack of expression there is the main reason I'm thinking of dropping that show.

SJS and SSR together are tempting me. I'm not into either medical or legal dramas but this might be a hate-watch.

I tried watching My ID is a Gangnam Beauty. And I could not even stand clips. She can't move a single muscle on her face. The only time she wants to emote (anything) she widens her eyes. :-D

I am thinking of re-watching "One mom, three dads" which is an old SSR drama to get my SSR fill.

The eye-widening trick is useful to use when someone is making a long boring presentation in meetings, however, especially after the speakers says an innocuous but jargony phrase like "satisfying project stakeholders."

You widen eyes in apparent alarm, speaker gets flustered wondering why that would be controversial, cuts short remarks.

I am doing this in my next calls! ALL OF THEM!