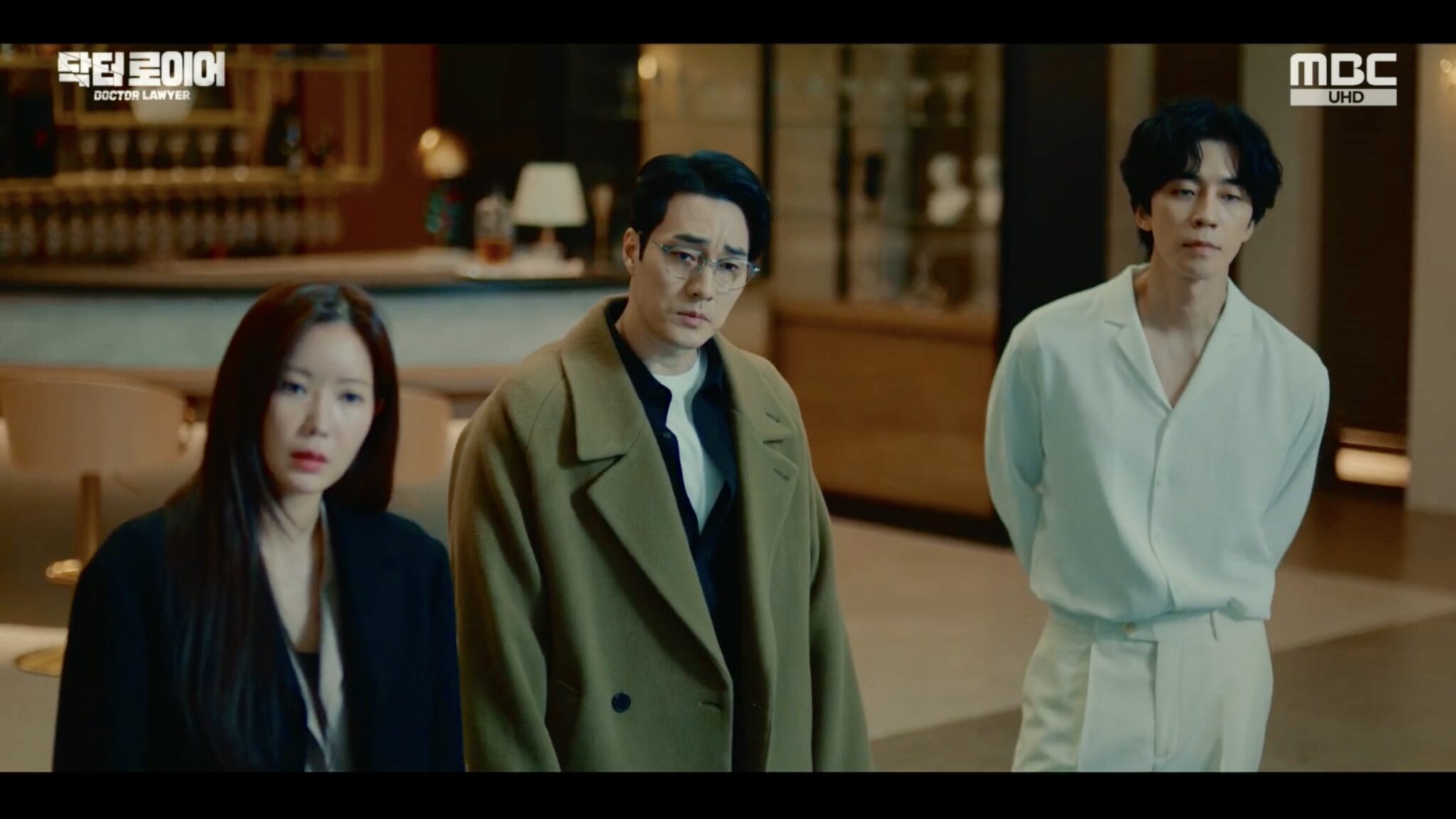 It’s one step forward, one step back — our protagonists finds themselves thwarted yet again. Still, the cracks in the enemy’s armor are beginning to show, and that might just be the opening our heroes need to tear their carefully-crafted charade apart. 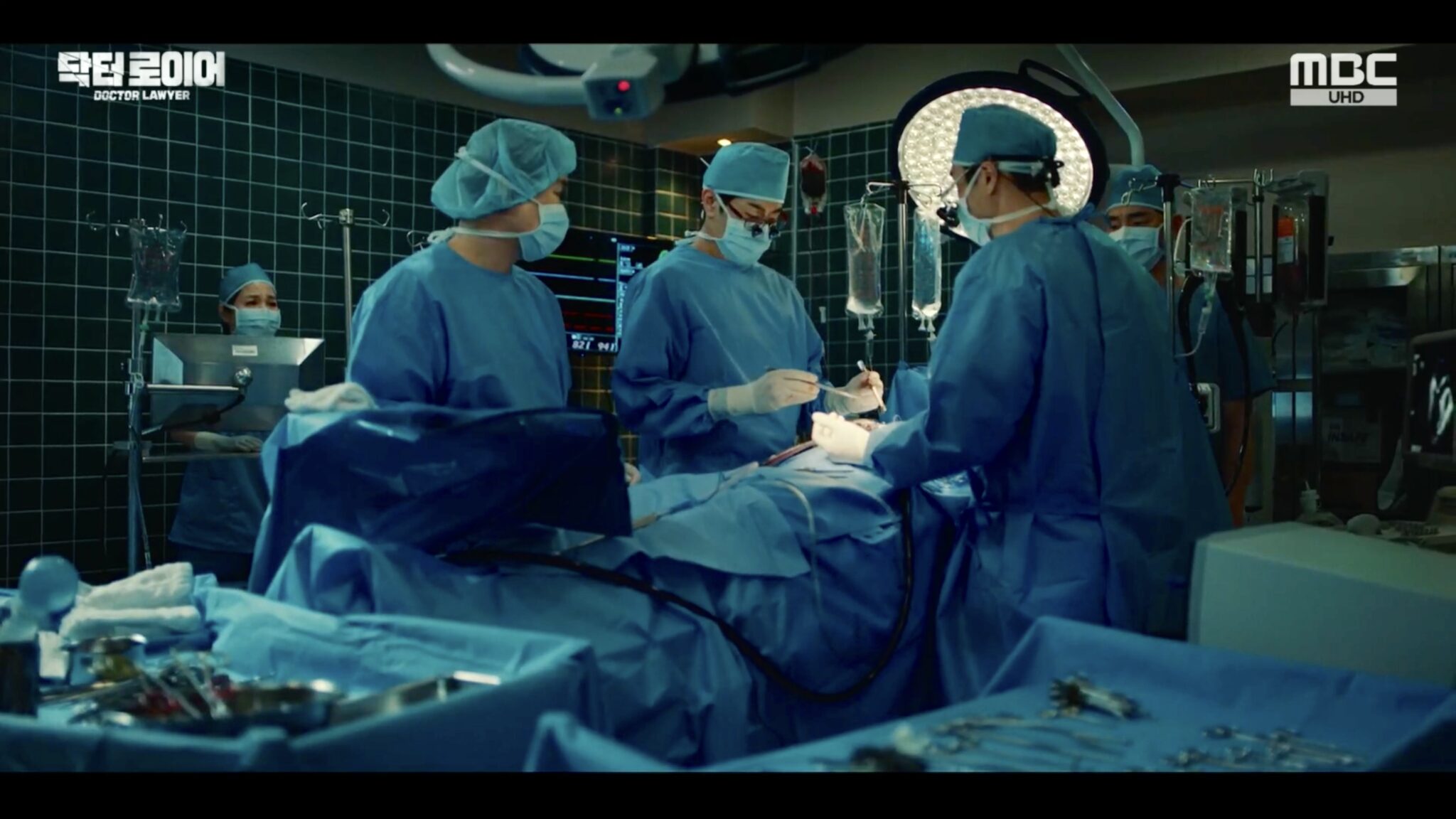 While Yi-han operates on Hyuk-chul and Jung-hyun’s son, Seok-young manages to convince the judge into calling for an hour-long recess. Due to Yi-han’s shaking hand, Yo-seob offers to take over the surgery — but a flashback reveals that Chairman Gu actually encouraged him to do the surgery, rather than prevent him from going.

Eun-shil offers to defend Hyuk-chul in Yi-han’s absence, and she hands a file to Hyuk-chul. Still, he turns her offer down — and right on cue, Yi-han rushes into the courtroom. Phew, he made it!

The trial proceeds as planned, and Seok-young calls in Chairman Gu as a witness. Predictably, Chairman Gu denies ordering Hyuk-chul to commit murder on his behalf. It’s up to Hyuk-chul to fulfill his end of the deal and reveal the truth, since Yi-han saved his son. 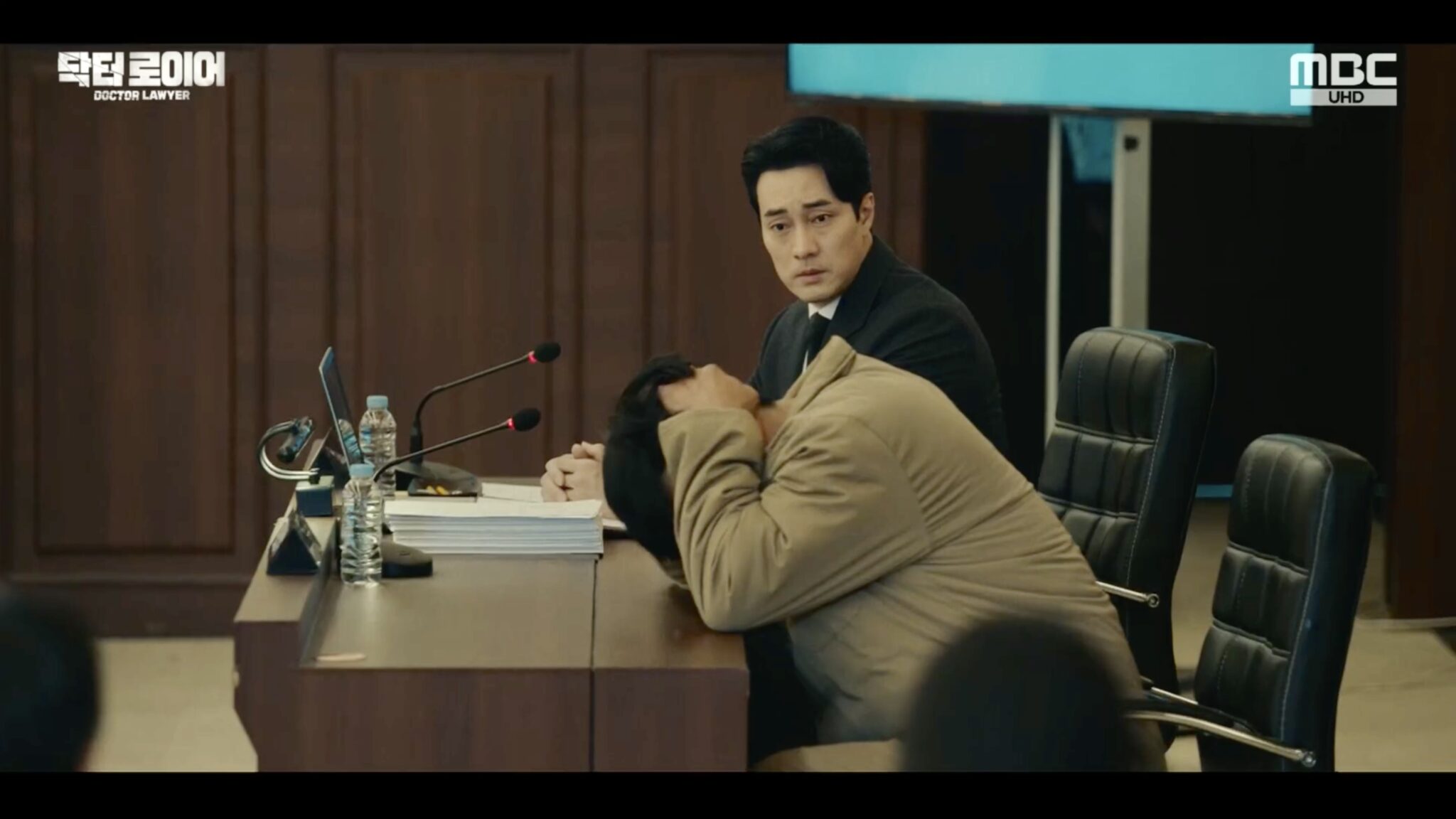 Hyuk-chul admits that yes, he was instigated to kill… by the devil. He works himself up into a frenzy, yelling that the devil kept whispering into his ears, until the bailiffs end up having to drag him out of the courtroom. Well, there goes his credibility.

Chairman Gu has his men transfer Hyuk-chul’s son away from Yi-han’s clinic, smugly declaring that it’s not kidnapping — ah, Eun-shil’s file contained a consent form. She’d threatened Hyuk-chul, warning him that Banseok would rather kill off his son if he’s not in their hands. 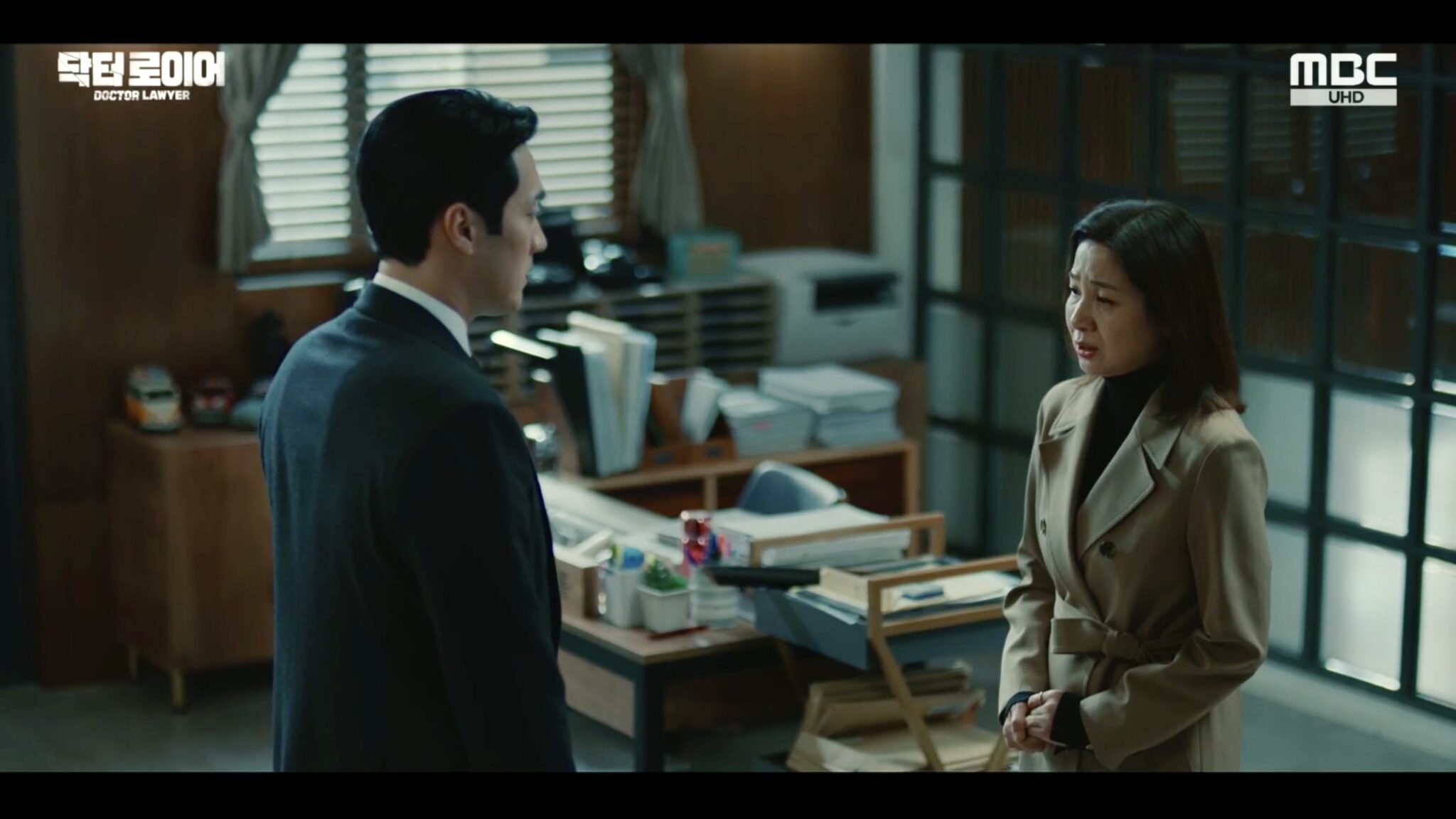 In an effort to win back Yi-han’s trust, Jung-hyun reveals a long-kept secret — Yi-han’s father had been forced to take his own life. Chairman Gu had deliberately assembled an inexperienced team for the surgery that Yi-han’s father helmed, thus murdering his father-in-law in order to maintain his own position in Banseok.

Hyuk-chul confesses the same to Seok-young, admitting that he framed Yi-han’s father for bribery under Chairman Gu’s orders. Coupled with the falsified surgery records that Chairman Gu had pressured Jung-hyun into forging, Yi-han’s father had seen no other way out. 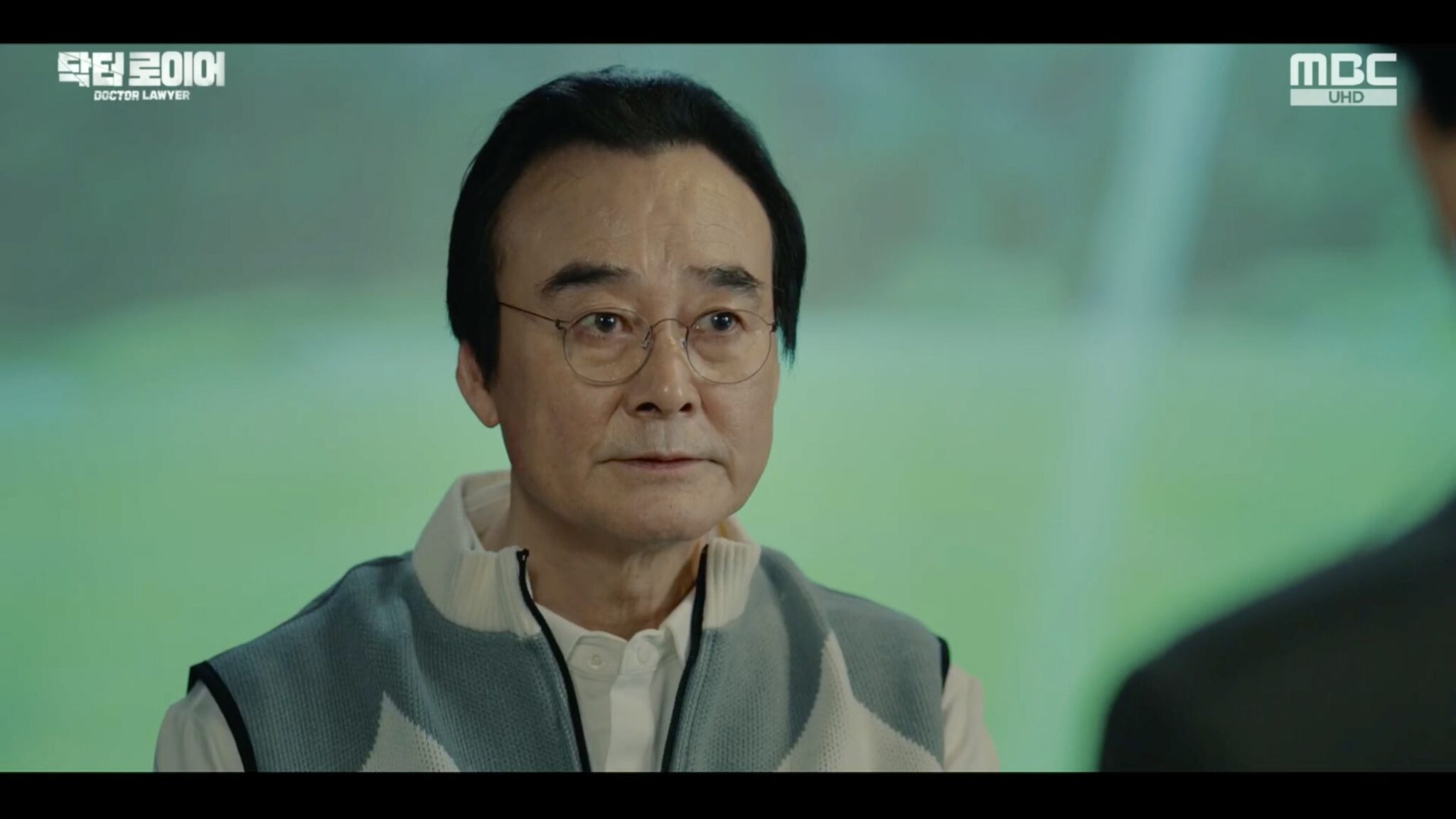 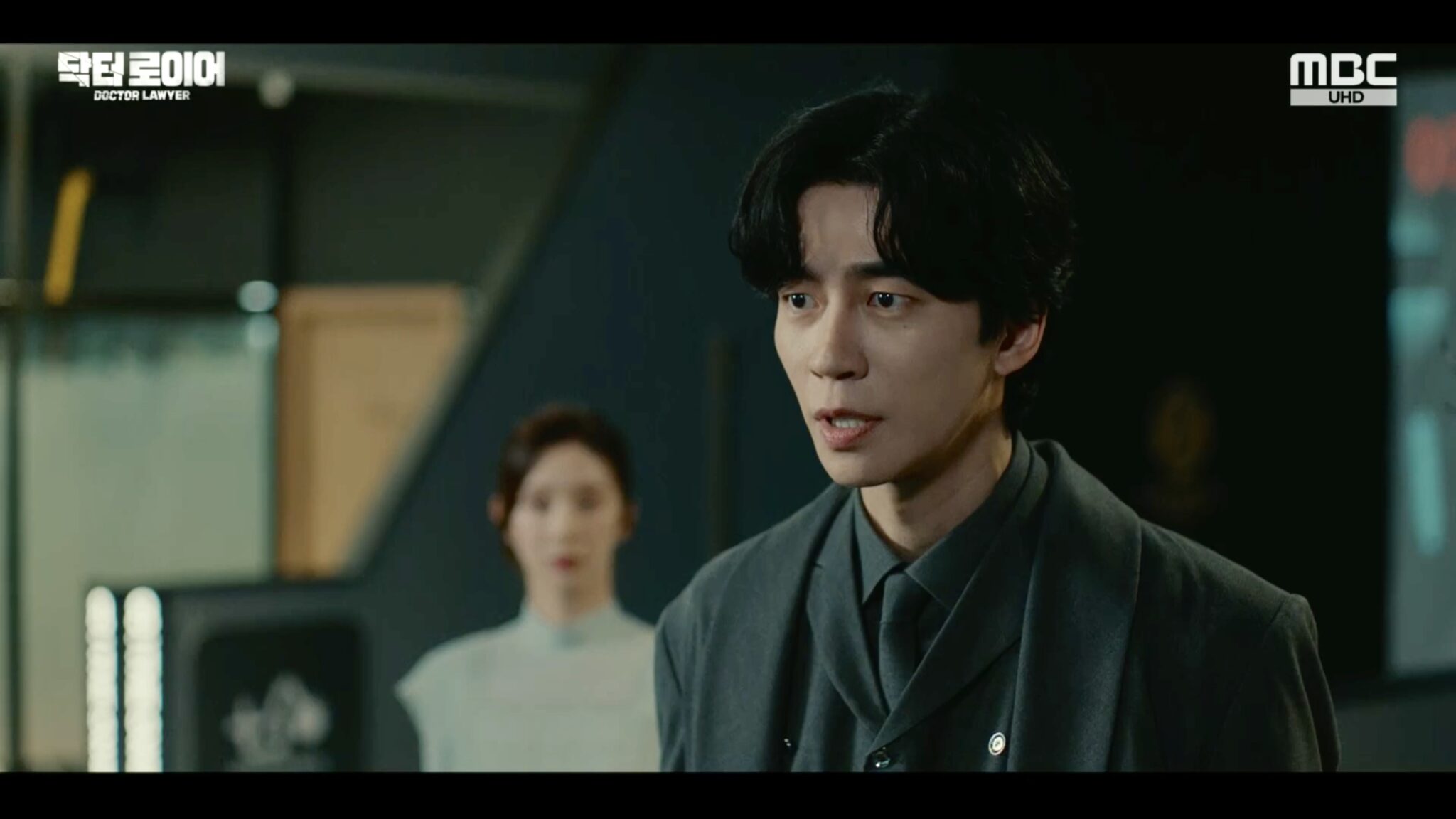 Since Yi-han’s plan has been jeopardized, Jayden switches tack to focus on Yoo-na instead. Leveraging on Assemblyman Im’s falling approval ratings, Jayden offers his U.S. connections — wouldn’t a meeting between the two countries’ presidential candidates earn him the public’s favor?

That does the trick, and Assemblyman Im is won over. Upon learning that Hyun-sung was secretly planning on having a ghost doctor operate on him instead, Assemblyman Im is more than ready to support Yi-han, too. 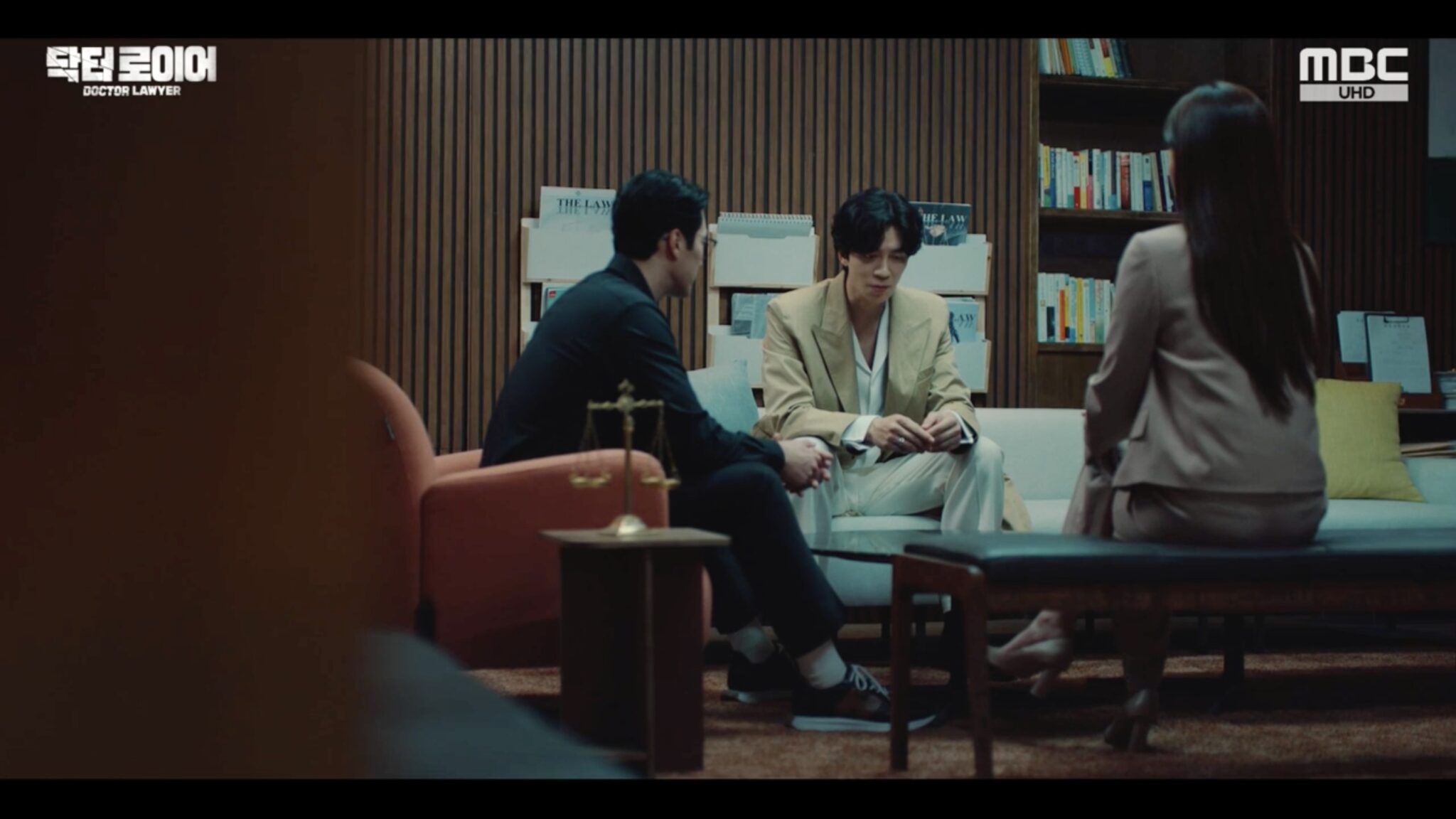 Jayden introduces the two to each other, and Yi-han promises to operate on Assemblyman Im. Behind closed doors, though, Yi-han and Seok-young tell Jayden about Seok-joo — his heart may very well be beating inside Assemblyman Im.

Upon hearing the full story, Jayden looks appropriately appalled. He promises that if Assemblyman Im indeed turns out to be an accomplice to murder, he’ll jump ship and side with Yi-han instead. (Whether he’ll actually follow through is another matter entirely, of course…)

As usual, there are more layers to Jayden’s plan. The next one involves Chairman Gu’s brothers-in-law, who are potential chairman candidates (assuming Chairman Gu is successfully appointed as the Minister of Health and Welfare). Jayden easily charms them over with an expensive gift of rare whiskey, making clear his intention to support them. 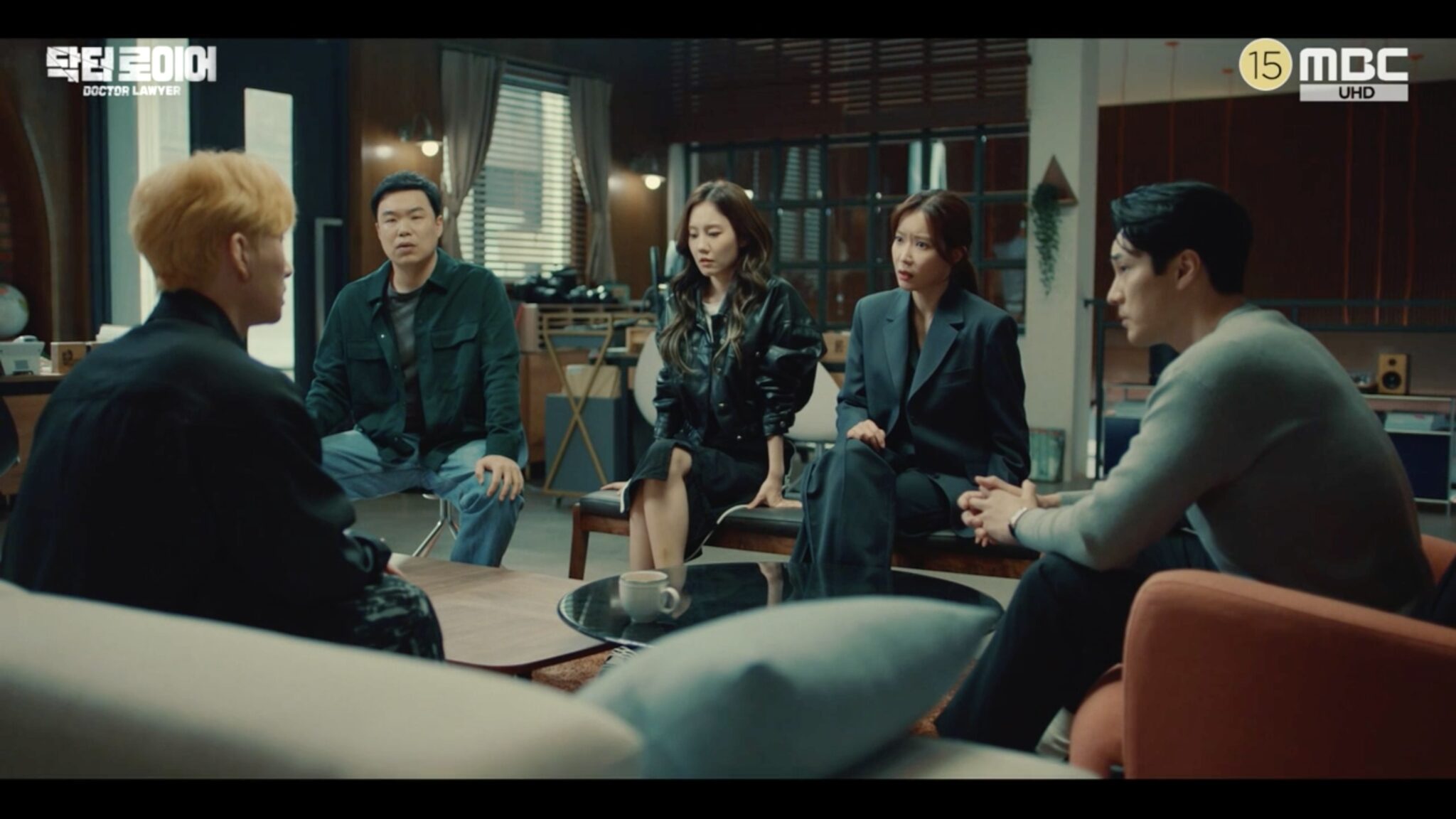 Yi-han and his team do some sleuthing, and they surface something suspicious about Assemblywoman Yoon. Her daughter YANG SUN-AE (Jung Bo-min) is privately warded in Banseokwon, but the guardian listed is someone called DO JIN-WOO (Kim Dae-gun).

On a trip to investigate Sun-ae’s apartment, Yi-han ends up rescuing Jin-woo from Assemblywoman Yoon’s thugs. They return to Yi-han’s clinic, where Jin-woo tells his story — Assemblywoman Yoon wants him silenced, since he knows her dirty secret. She’s been forcing Sun-ae to undergo cosmetic surgery ever since she was a child, simply to craft the facade of a perfect daughter.

That’s why Sun-ae is currently in Banseokwon; the aftereffects of her limb-lengthening surgery caused her immense pain, necessitating a follow-up operation. Thing is, Jin-woo hasn’t heard from her ever since she was hospitalized. 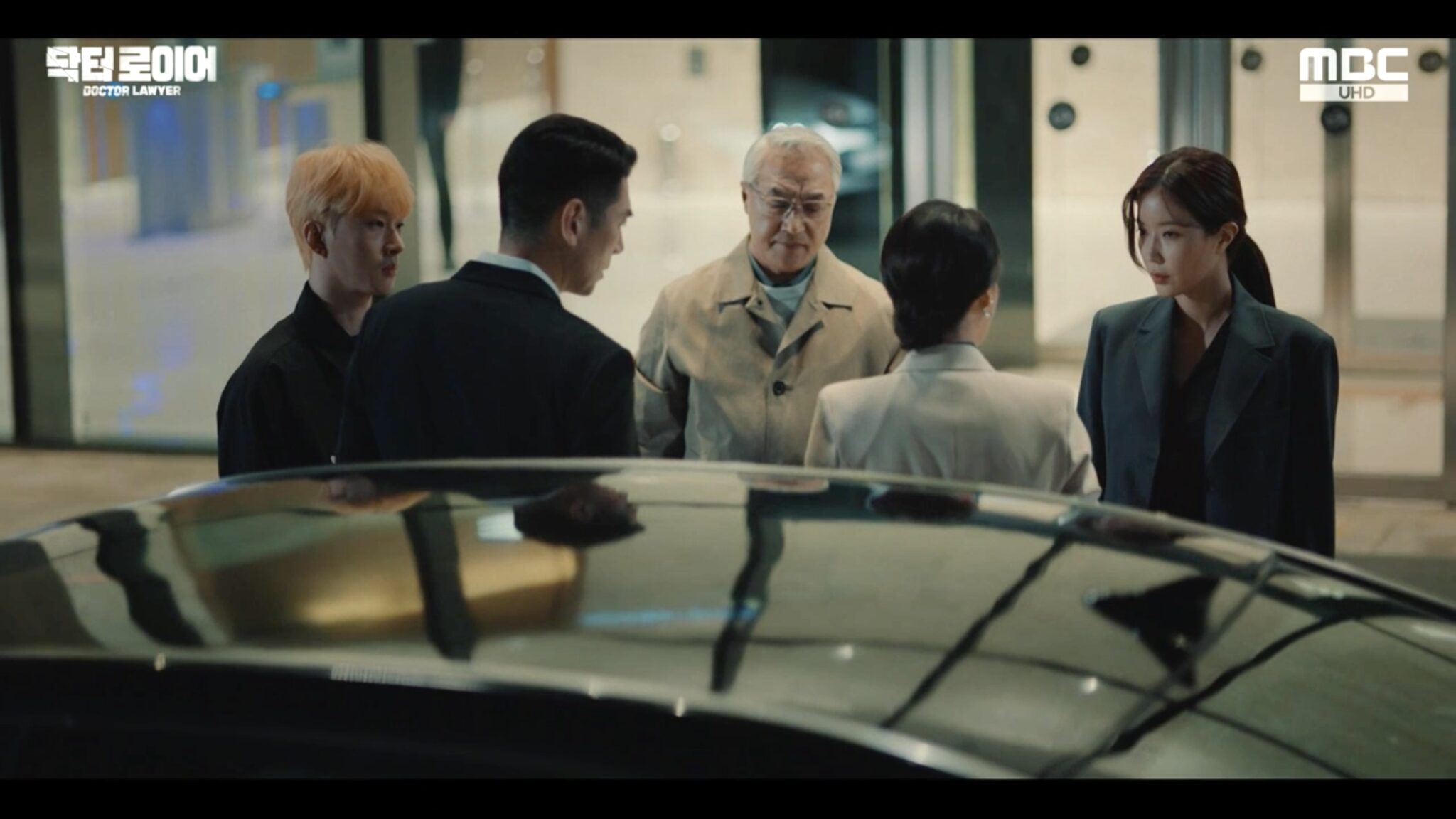 Assemblywoman Yoon is determined to protect her image at the expense of her daughter, and she agrees when Chairman Gu suggests injecting a drug into Sun-ae to keep her in suspended animation and prevent her from regaining consciousness just yet. Chairman Gu frames it as guiding a child away from a bad influence and onto the right path, which is absolutely sickening to hear.

Thankfully, Seok-young arrives to nip their hypocrisy in the bud. Banseok has been sued by Sun-ae’s legal guardian, who is no longer Assemblywoman Yoon — it’s now Jin-woo, backed up by a marriage certificate.

Yi-han shows up alongside Assemblyman Im, who calls Chairman Gu out for double-crossing him and aligning with Assemblywoman Yoon. Introducing himself as Jin-woo’s attorney, Yi-han requests for Sun-ae to be transferred to his clinic, effective immediately. 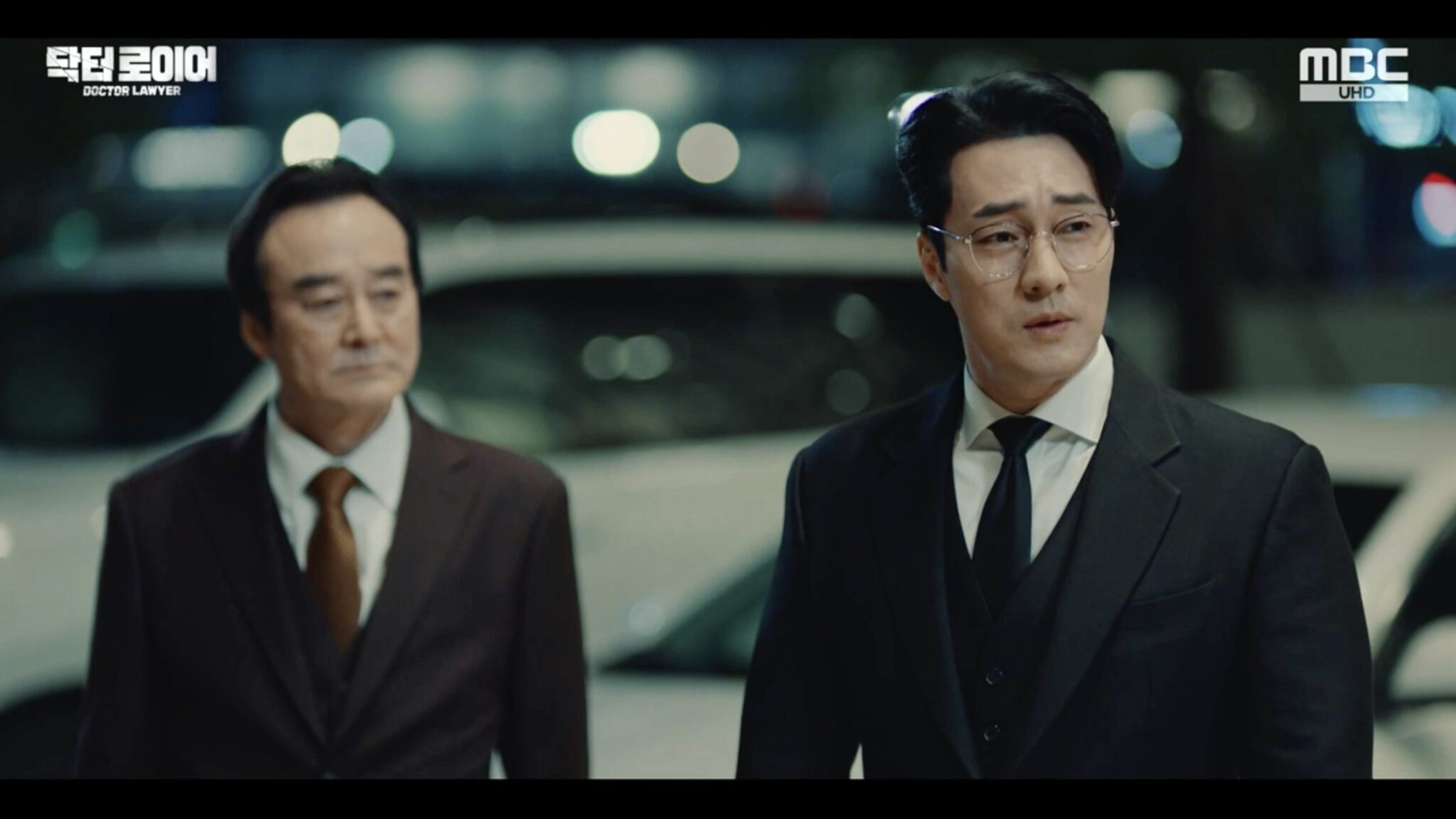 I don’t know if it’s just impatience rearing its head, but I’m starting to get a little worn out by how predictable the plot developments are. It takes so long for anything to happen, too! Maybe it’s just because I get squeamish during the operation scenes (I thought this show would have more lawyering and less doctoring, oops), but I feel like the drama draws certain scenes out for far too long.

I’m assuming the production team intended to build up the tension, but it ironically has the opposite effect; I’ve found myself wanting to fast-forward, and that’s never a good thing. I wish the execution was better, because I’m still rooting for our idealistic protagonists — it’s just really hard to get invested when the drama keeps meandering about and trudging along. 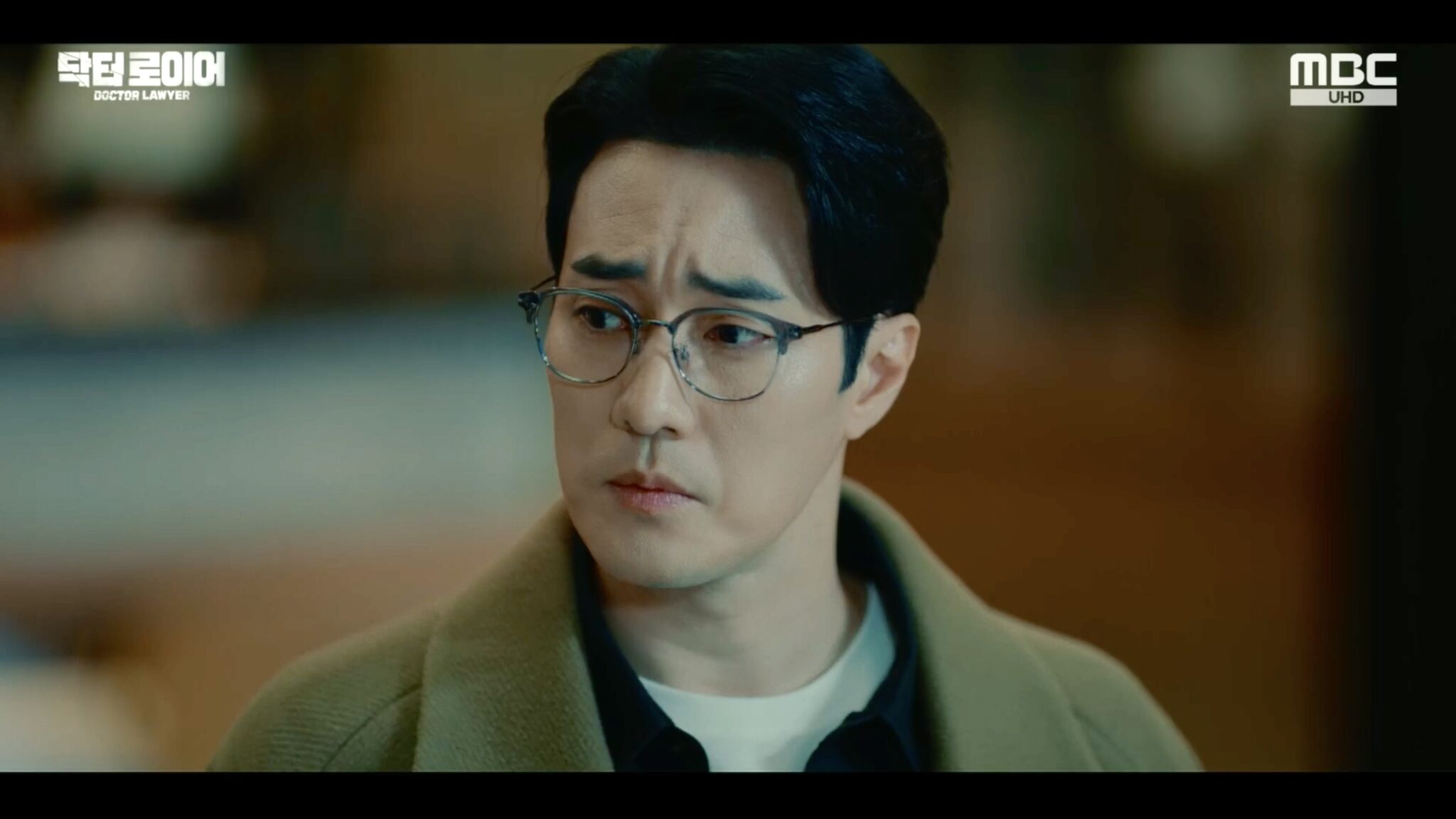 In any case, though, I’m still curious as to who the recipient of Seok-joo’s heart was. The drama’s been dropping so many red herrings that at this point, it feels like a game of Who’s The Husband: Heart Edition!

Right now it seems like it’s Assemblyman Im’s turn to be in the suspicion spotlight, but a small part of me wants it to be Jayden just so I can watch the sheer chaos that’s sure to unfold. (And of course, so we can get more Jayden screen time — less baddie politicking, more chessmaster manipulating, please!) 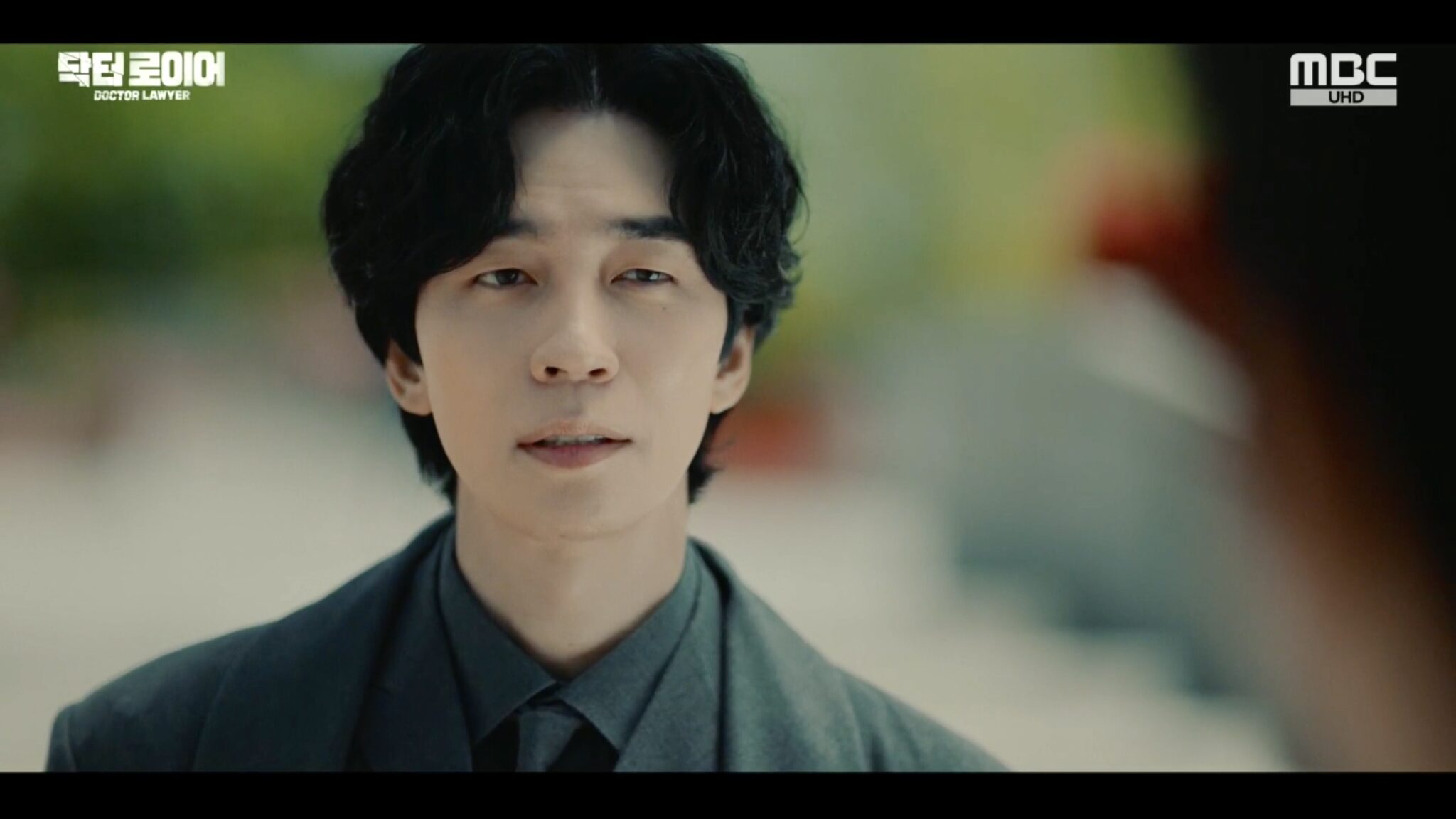 I refuse to believe Jayden as the heart transplant patient. He continuously wears unbottoned shirts and still no scar on his chest. Chairman Im has a scar but not Jayden. Can the scar be removed completely with surgery? 🤔

I also wonder if Assemblyman Im being the recipient is a red herring or not. There's currently not enough evidence to support he is the one when the only factor is that he got a heart transplant at Banseokwon ~5 years ago.

I thought Seok Joo's death was reason enough for Yi Han's revenge mission, but then the story added in the circumstances around Yi Han's father's suicide. So I wouldn't be surprised if the writer pulled out a bigger twist with Jayden being the true recipient all along.

It would be interesting to see some tension between Yi Han and Jayden. But what if Jayden got the heart without knowing where it came from?

I hope things pick up next week. I don't know what secrets Assemblywoman Im has, but so far, Assemblywoman Yoon is much worse. She is horrible and needs to get kicked out of her position asap.

Who knows what's really going on in Jayden's mind. He does keep things interesting though.