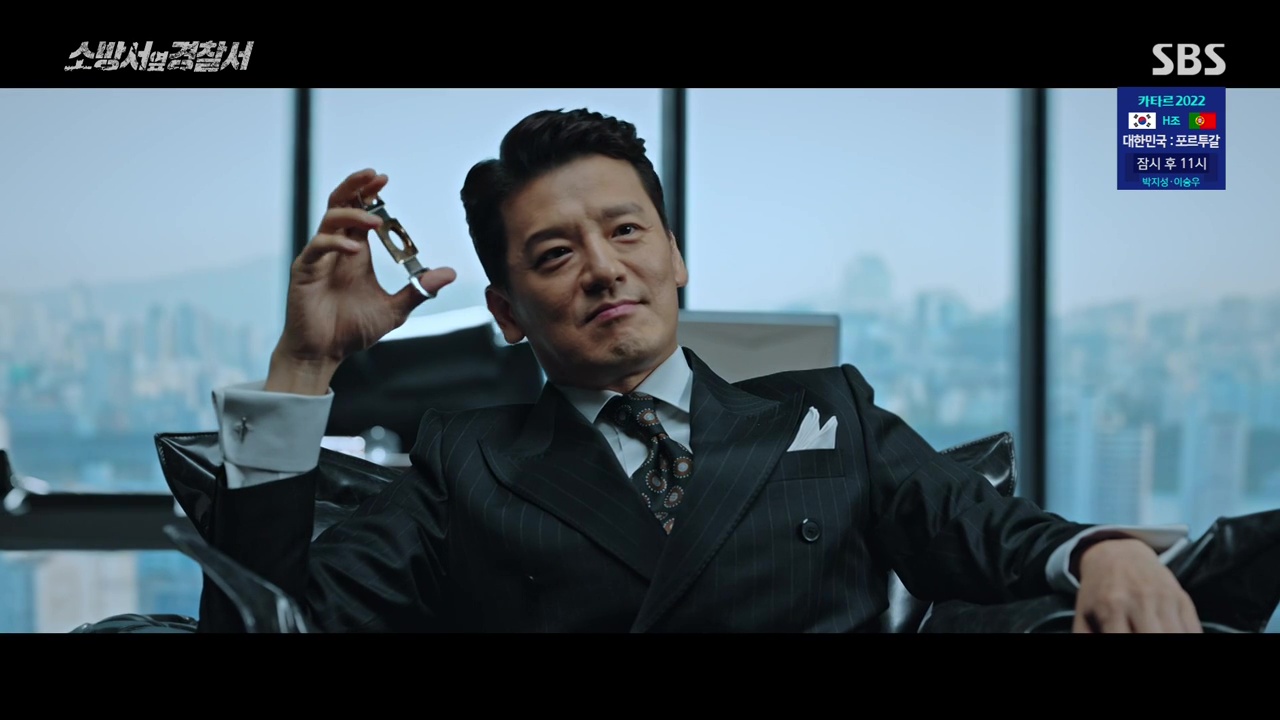 It’s time for our evil chaebol to take the stage as he schemes to get rid of his nemesis once and for all. Meanwhile, our dogged cop finds himself at the center of a new case in ways he did not expect. It’ll take all his wits and help from his newfound friends and frenemies to get out of this newest scrape. 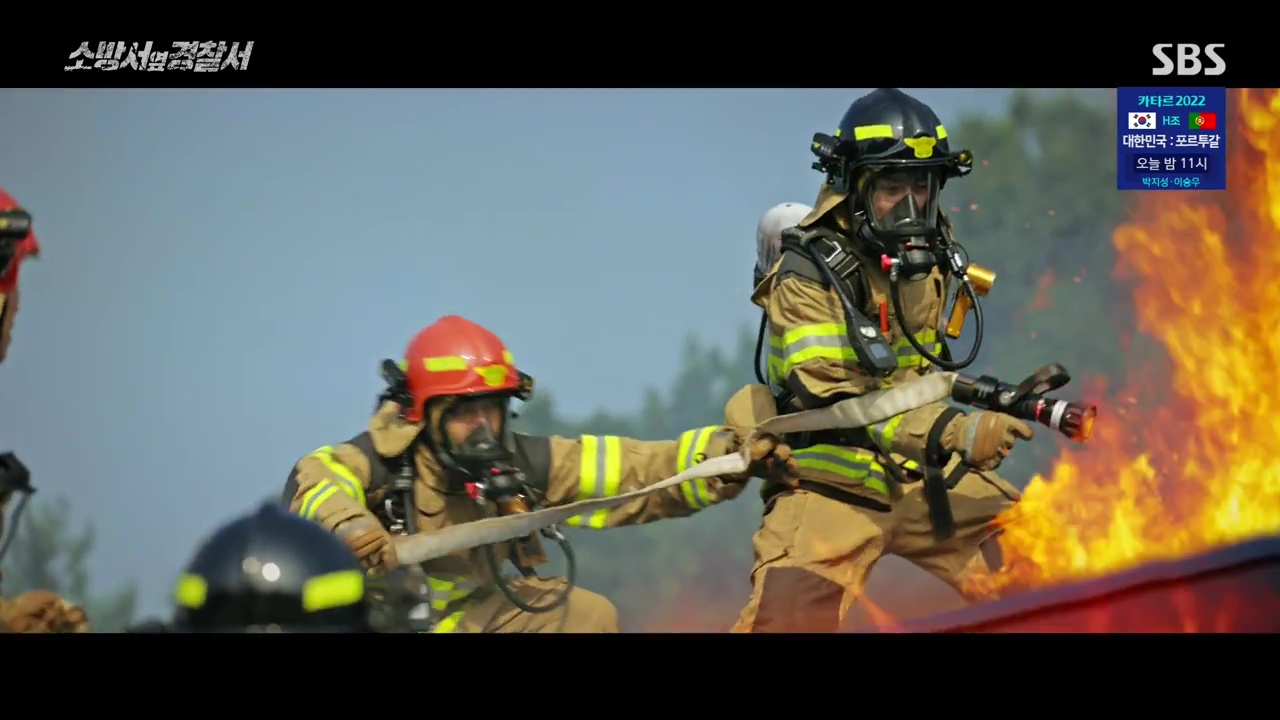 I knew at some point we’d dive headfirst into the whole Tae-hwa subplot, and that point is now. We only get one case this week, and it starts with a fire at a diner. While Do-jin and team put out the large fire, Ho-gae rescues a teenage boy from a nearby building filled with smoke.

Inside the diner, Do-jin finds one fire victim. We’re treated to an overly detailed autopsy – it involves rib cutters is all I’ll say about that – and discover the man didn’t die in the fire but was strangled prior. Silly me thinking it might just be your average fire, because we all know fires only happen when murder is afoot. It’d be nice to have some average, non-murdery cases. I find it hard to believe every emergency involves murder and nefarious mayhem. Sometimes, probably most of the time really, a fire is just a fire. 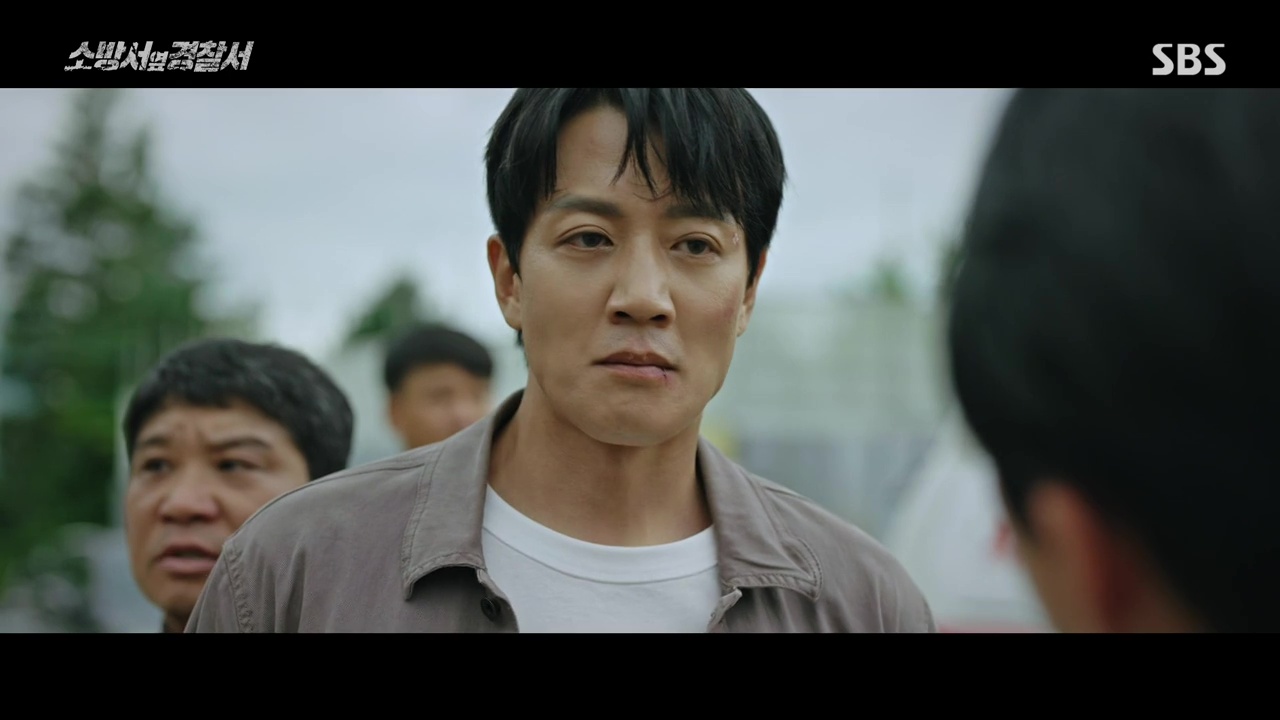 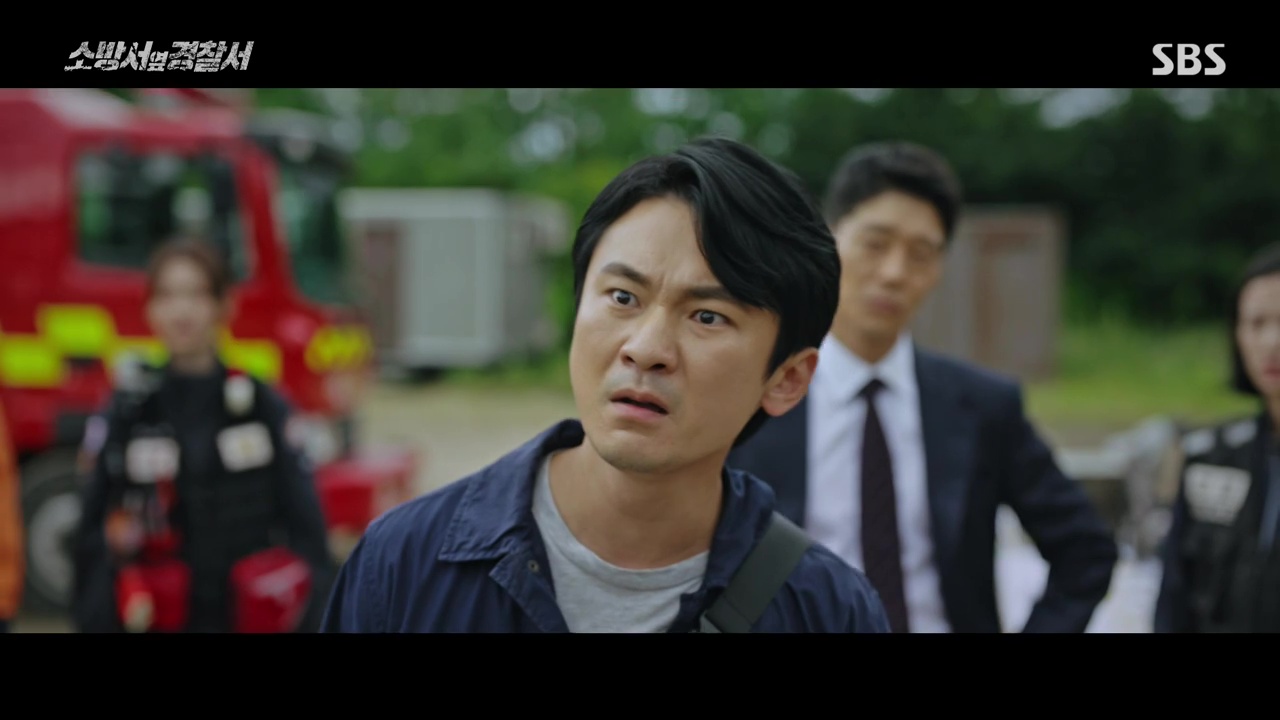 We do get to see Do-jin in his element here, annoying Ho-gae with his impressive ability to recreate the burned-down crime scene. Ho-gae feels vindicated when he’s the one to find blood on the scene, though. The only problem is, when they run the DNA test, it comes up as Ho-gae’s blood.

And that’s not all. Every piece of evidence they find neatly points to Ho-gae: a shoeprint that matches his, a lighter fluid bottle with his fingerprints, and nearby CCTV footage that shows Ho-gae near the crime scene right before the fire. (And that’s why you shouldn’t go into remote areas alone when you get mysterious phone calls.)

Naturally, Ho-gae is arrested. It all screams set-up by Tae-hwa, but it’s so meticulously planned that it’d be hard not to suspect Ho-gae. Tack on his temper and violent streak, and all but Ho-gae’s current, closest teammates are convinced of his guilt. Seol and Pil are especially upset by the framing, but even Do-jin works extra hard to try to exonerate Ho-gae. 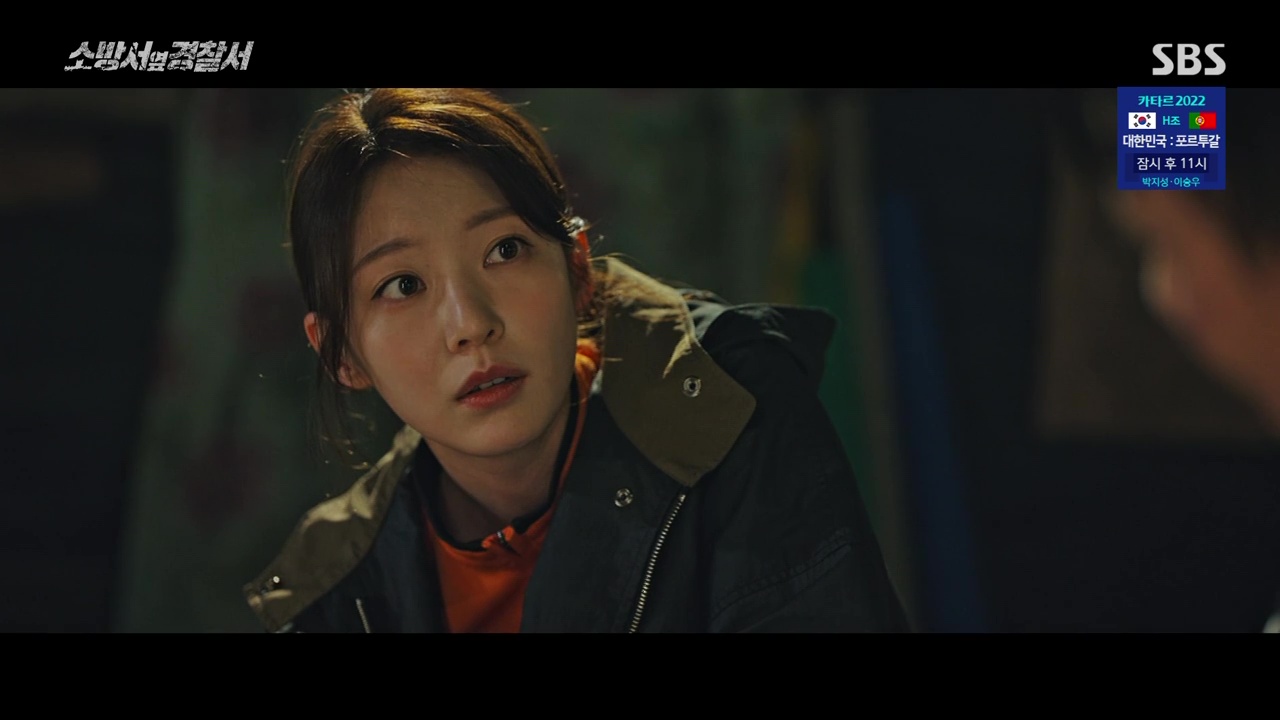 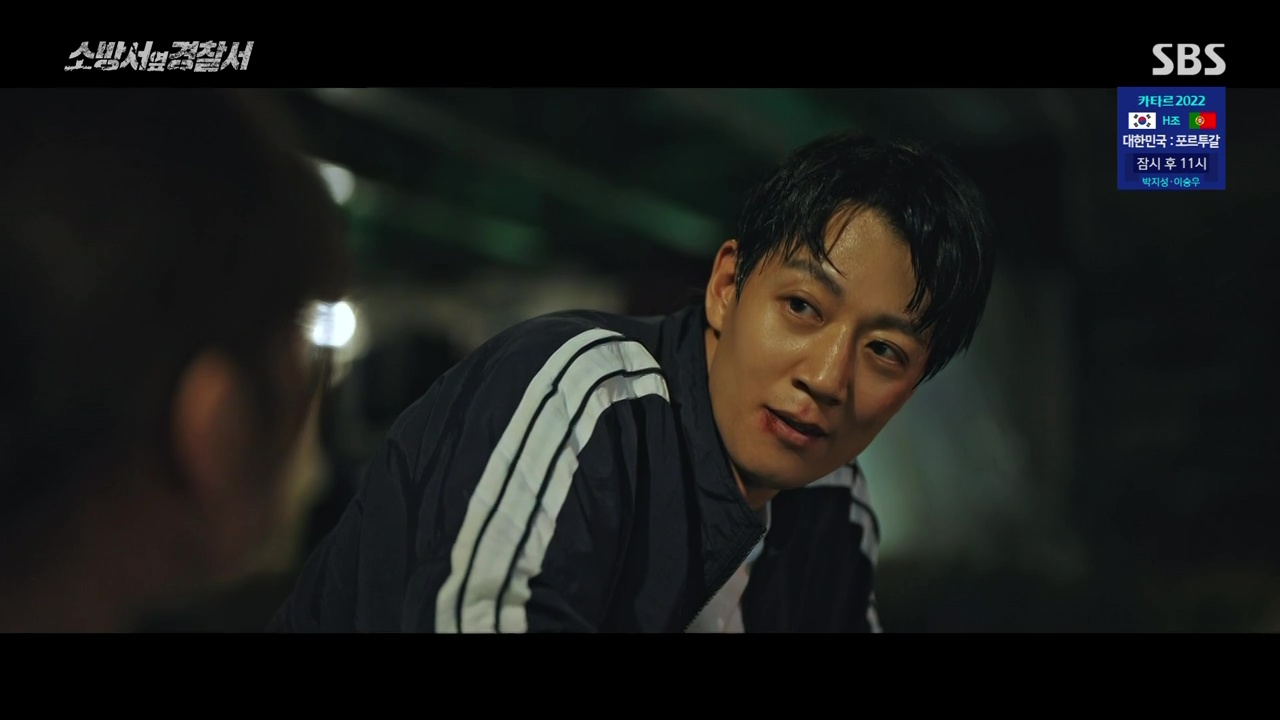 It’s a good thing because prison isn’t exactly the safest place for Ho-gae since he put about half the prisoners in there. He’s greeted with a beating and a shanking, in that order. Ever the risky opportunist, Ho-gae uses his hospital transport as a chance to escape. He gets a message to Seol through the kid he saved from the fire.

She doesn’t hesitate to show up to Ho-gae’s hiding place and treat his multiple stab wounds to the abdomen. Despite the risk of being charged with aiding and abetting, she sticks around to help him figure out who the real culprit is.

Once they find the likely culprit by matching his shoes to the shoeprint found near the fire, they waltz into the police station with the man in tow. Of course, it’s not that simple since Tae-hwa and his people are hella prepared. But Ho-gae has a lot of friends who have his back and come together to invalidate the evidence against him so the prosecutor in cahoots with Tae-hwa has no choice but to let Ho-gae go. 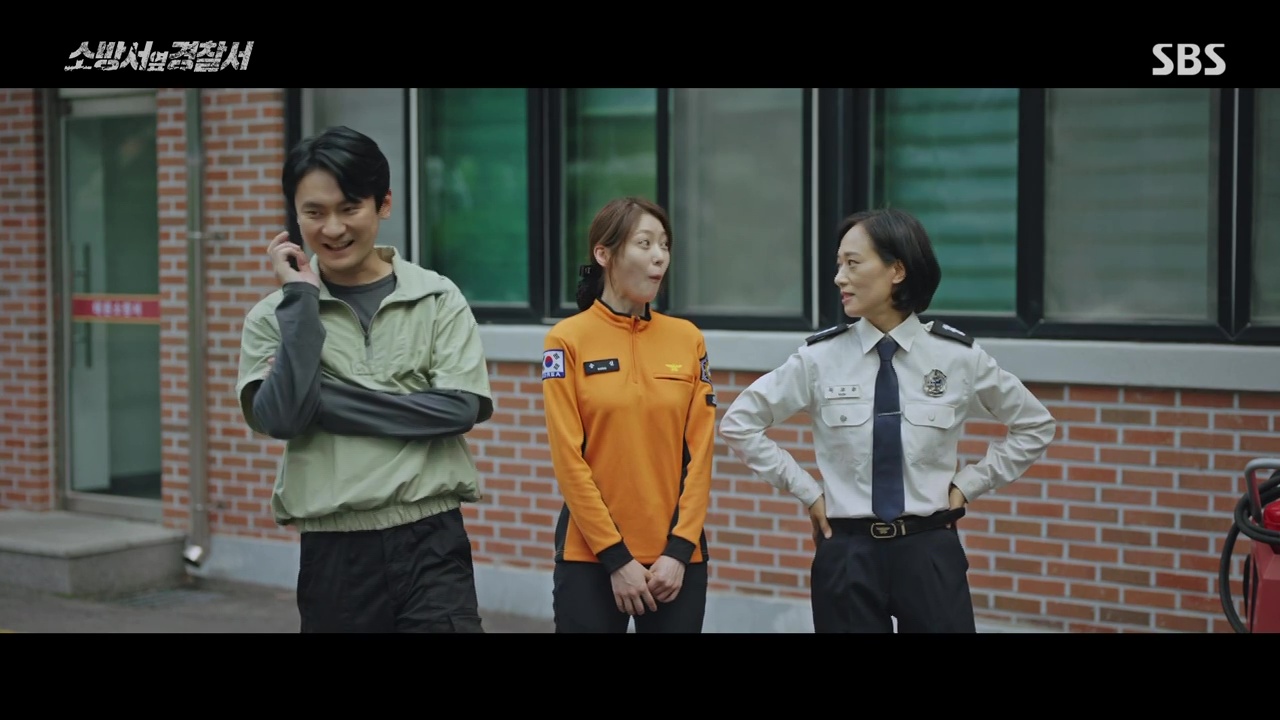 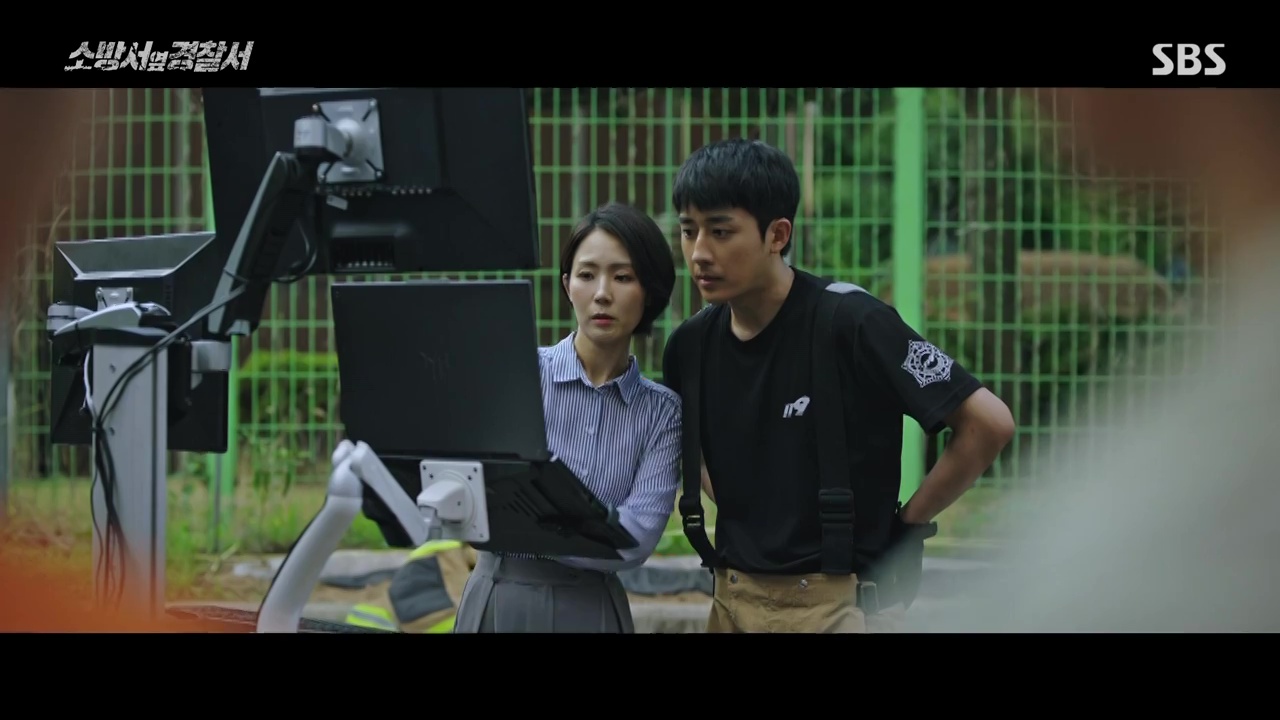 I wasn’t sure if the drama was setting up a romance between Seol and Ho-gae, but this week made that clear. Seol was mighty upset when Ho-gae was wrongfully accused and afterwards chastises Ho-gae for not taking care of himself and pushing people away. When he later shows up at her door, she frantically fixes her hair and makeup before answering. Ho-gae, too, seems very aware of her and awkward in that way that suggests feelings.

Poor Do-jin doesn’t seem to have a chance, but he might get a romance of his own. Forensic medical examiner YOON HONG (Sohn Ji-yoon) takes a strong liking to Do-jin the moment they meet, calling him sexy in front of the whole team. Gotta like a woman who confidently says what’s on her mind. 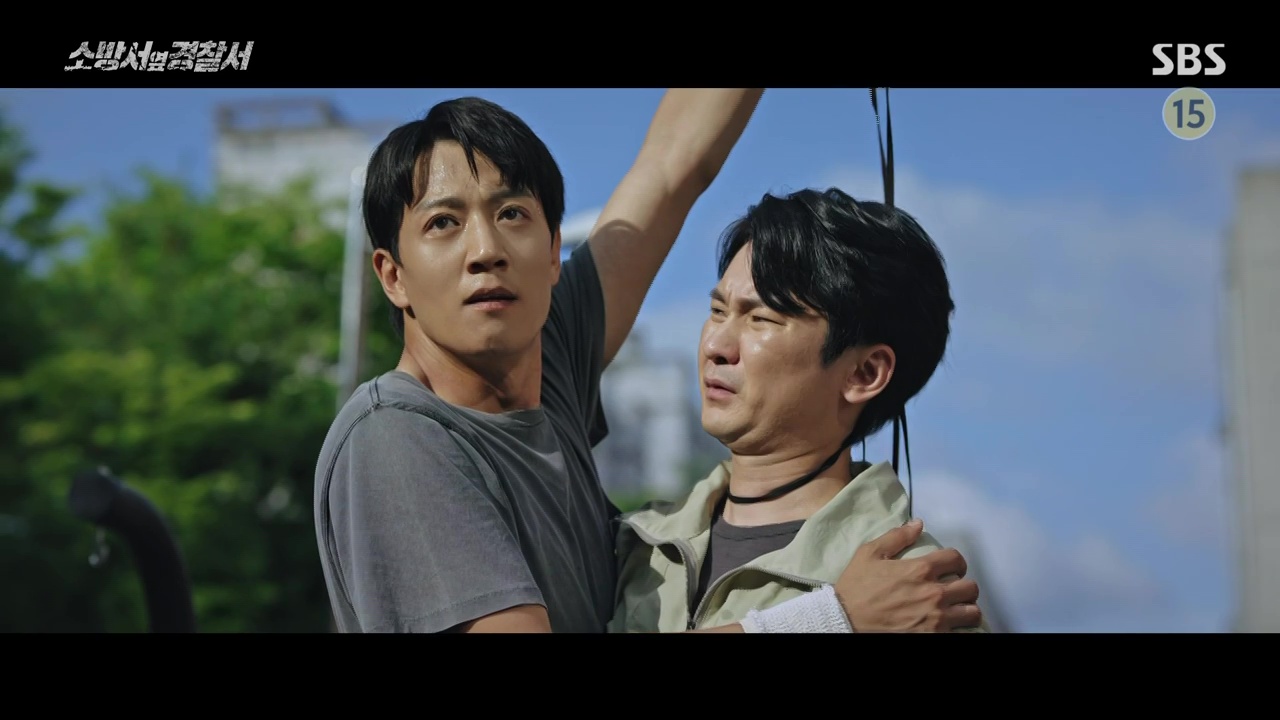 Par for the course, while Do-jin and the rest of the team meticulously experiment and examine evidence to solve the crime of how the man died prior to the fire, Ho-gae almost kills himself recreating the scene by hanging himself and solves the whole case in one go.

There was no murder. The deceased (the elderly man Tae-hwa bribed) doused the room in lighter fluid before hanging himself while holding a lighter that would drop and set the room ablaze once he lost consciousness. Tae-hwa exuberantly demonstrates using poor Pil as a prop.

Ho-gae always appears to magically solve the crime, but I like that he clarified to Seol that he’s not some investigative genius. Rather, he just works harder and is more dogged in solving the case than everyone else. He seems to believe it’s all he’s good for and comments that he’s never been good at helping others, but is great at taking them down. 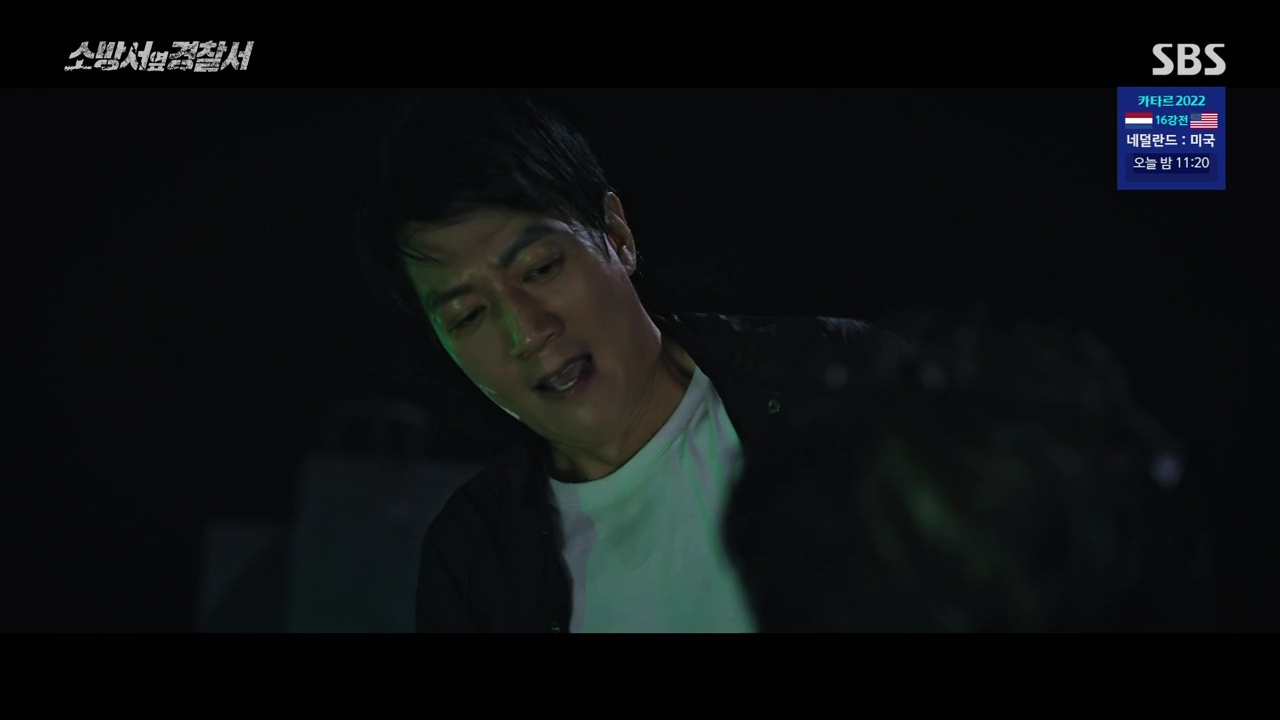 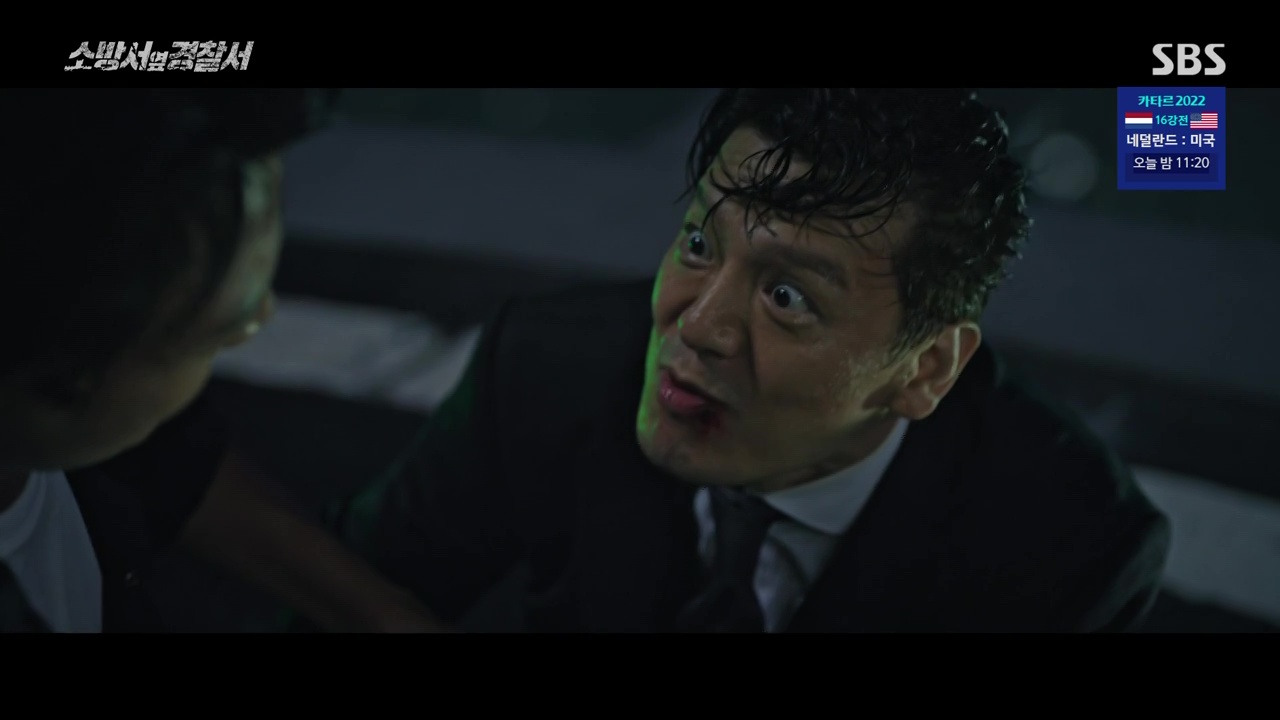 With the whole murder accusation out of the way, Ho-gae and his team can now focus on taking Tae-hwa down. Ho-gae and Pil get to Tae-hwa’s paid falsified alibi Choi Seok-doo right in the nick of time, saving him from Tae-hwa’s murder attempt. They then get him to confess he provided a false alibi, and it’s time to arrest Tae-hwa.

Tae-hwa makes a run for it, trying to helicopter out (do conglomerate office buildings all come with a complimentary helicopter pad?), but Ho-gae catches up to him on the roof. Ho-gae literally blows the helicopter away and has fun blasting Tae-hwa and his sketchy lawyer with the fire hose. Then, he handcuffs Tae-hwa to himself.

But then Tae-hwa gets the upper hand thanks to Ho-gae’s shanking injury. Tae-hwa brutally punches his wound and wraps the fire hose around Ho-gae’s throat. Ho-gae barely manages to throw Tae-hwa off, leaving Tae-hwa dangling off the roof from the handcuff and Ho-gae unconscious. 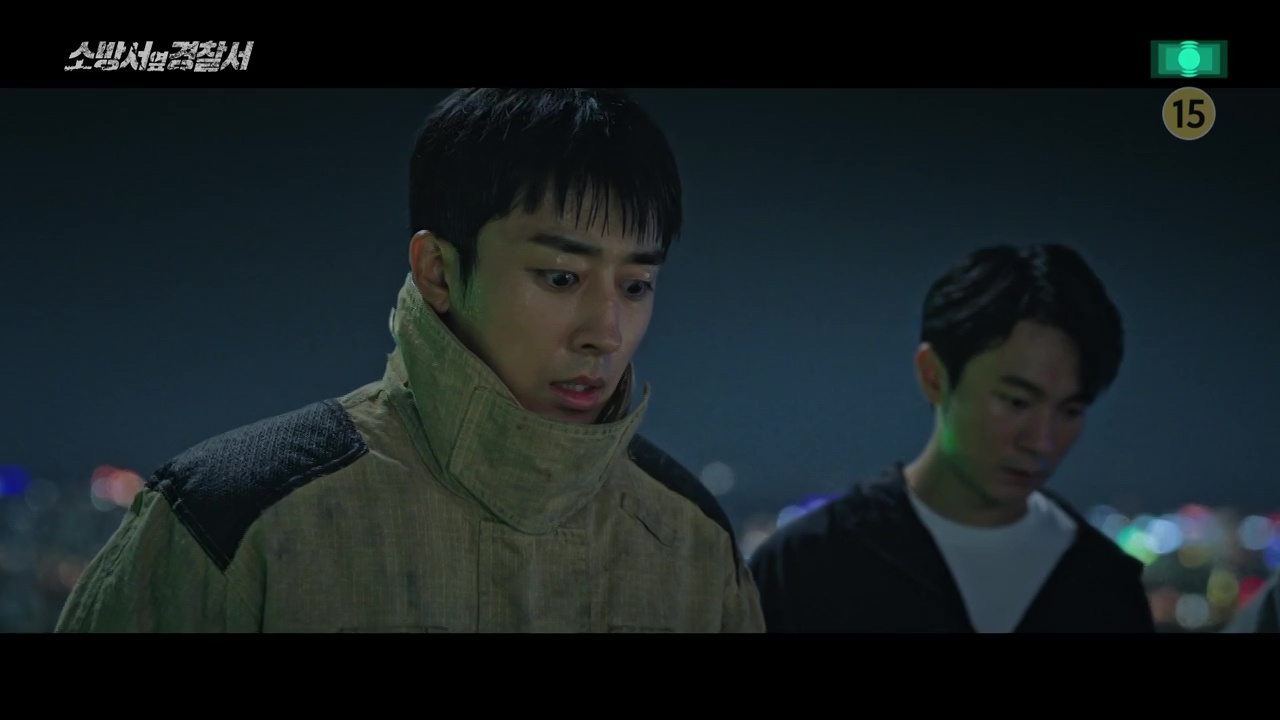 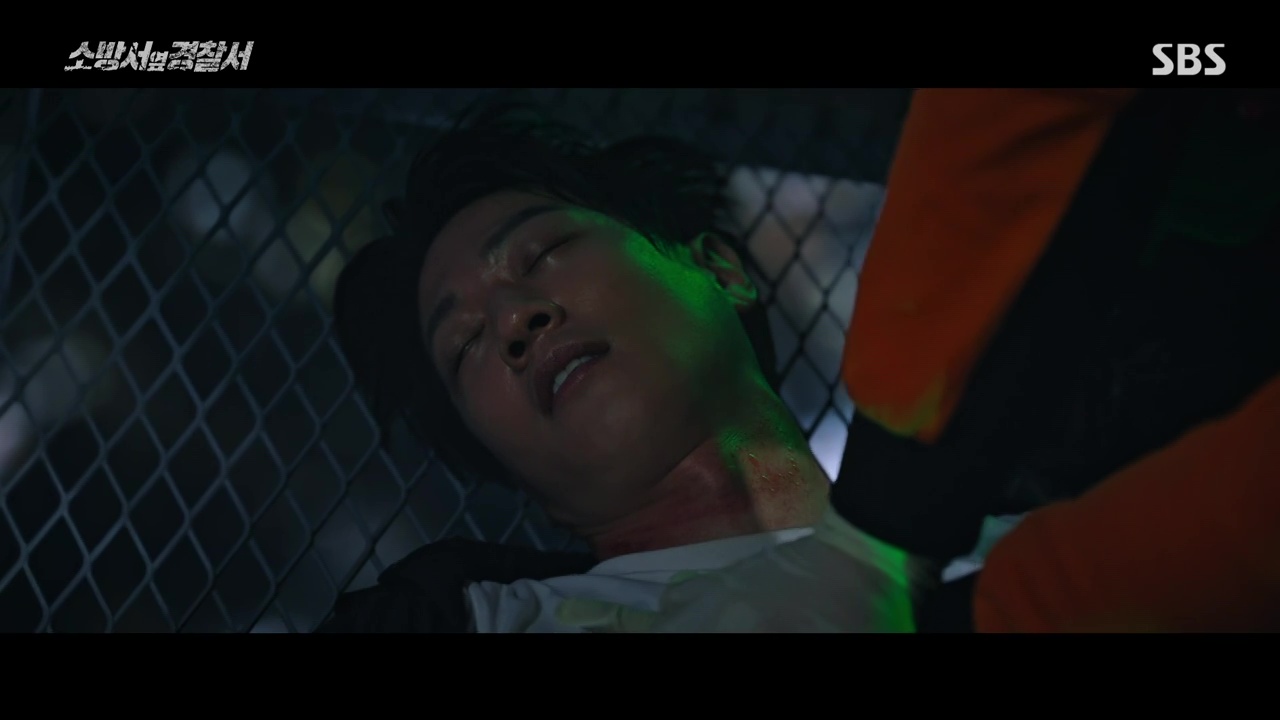 By the time his colleagues arrive, Ho-gae has already gone into cardiac arrest. Seol frantically tries to save him, bringing him back from the brink a couple of times. She anxiously waits all night while he undergoes surgery. That’s more than his father does – he pops in briefly to talk to the doctor and leaves.

Even during the whole murder accusation, Chief Prosecutor Jin seemed more concerned with his reputation than his son’s wellbeing. We learn that he has something over Chief Baek and ordered him to keep an eye on Ho-gae, but Chief Baek certainly isn’t happy about it, especially given how callous Chief Prosecutor Jin is about his own son. At least Ho-gae has people who do truly care about him. We end the week with Seol crying by Ho-gae’s bedside, waiting for him to wake up. 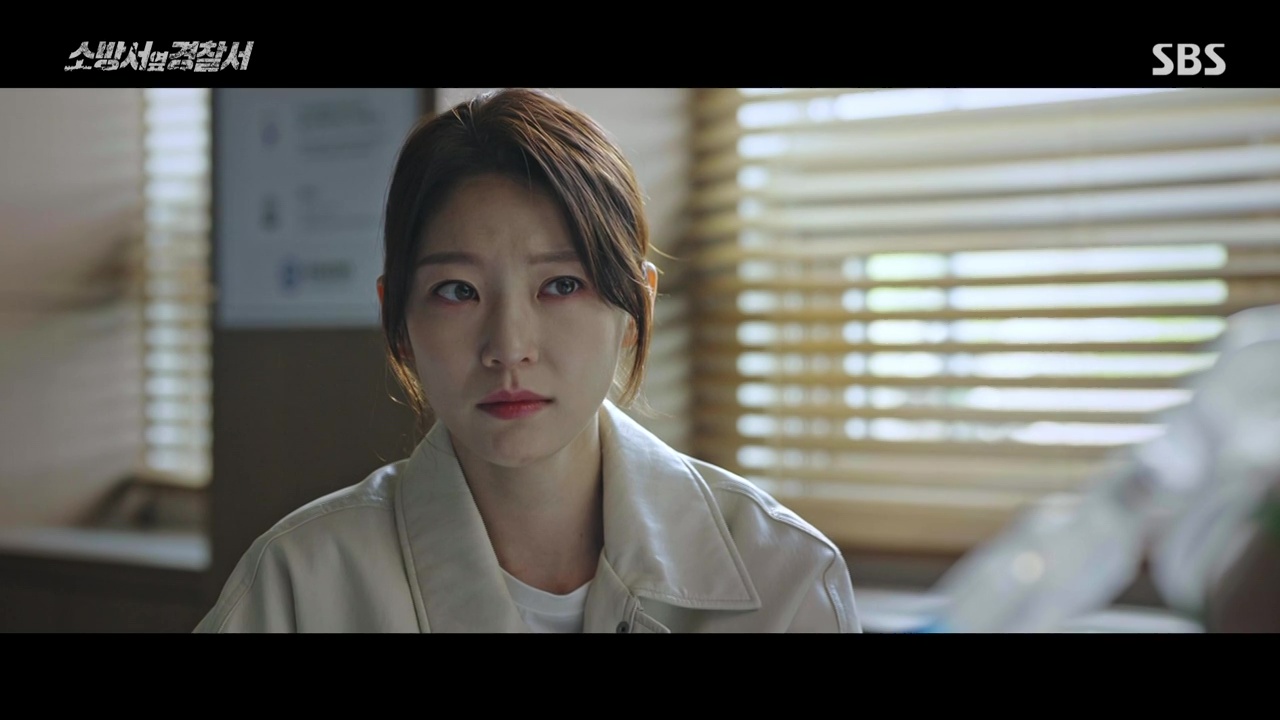 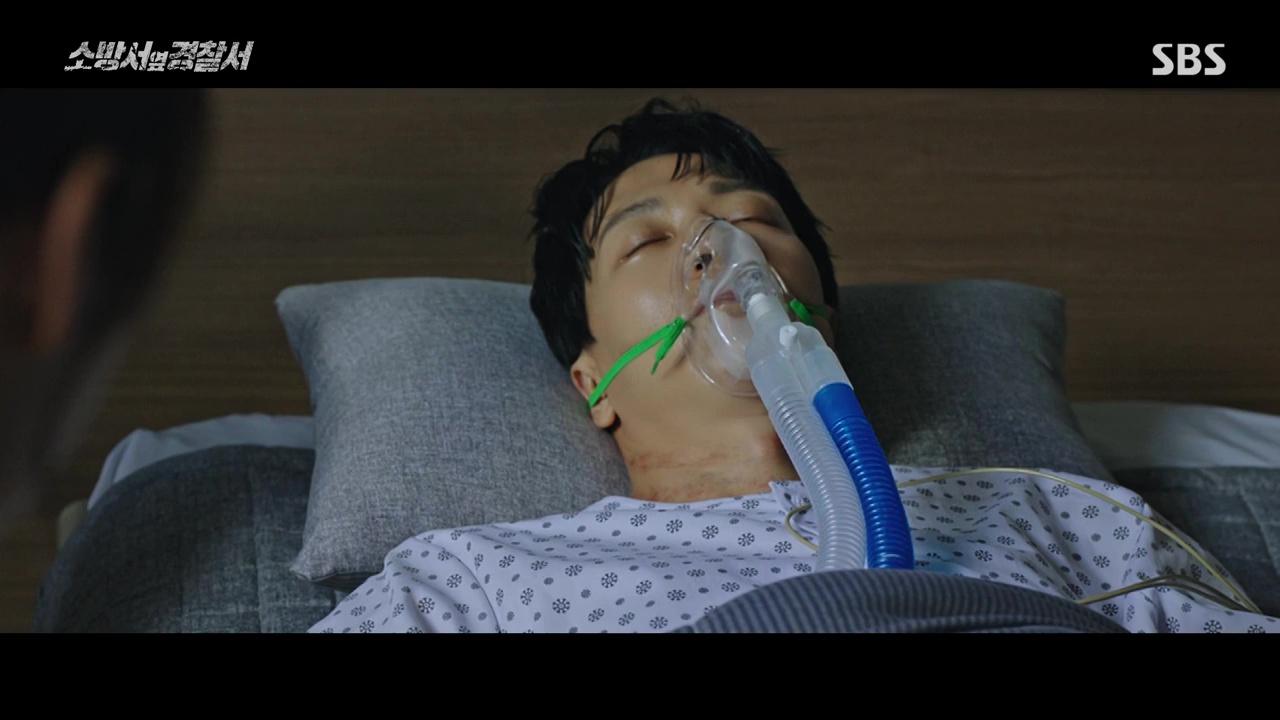 I’ve never been fond of this Tae-hwa arc, but it looks like we’re shifting focus to it in the latter half of the drama. I was hoping for more on the daily work of first responders without all the added murderous chaebol antics that seemingly invade every drama these days, even when it’s unnecessary. You’d think saving people’s lives from disasters and crises would be dramatic enough.

Something about the balance of the drama feels off to me. It’s not the realistic(ish) portrayal of the work of first responders I’d hoped for, but it’s also not an entirely character-driven drama that would allow me to feel invested anyway. We’re halfway through, but I’m not quite sure what the drama is going for – is it a crime procedural? Action thriller? Ensemble slice-of-life? Hero-with-a-past romance? Sometimes, less is more. 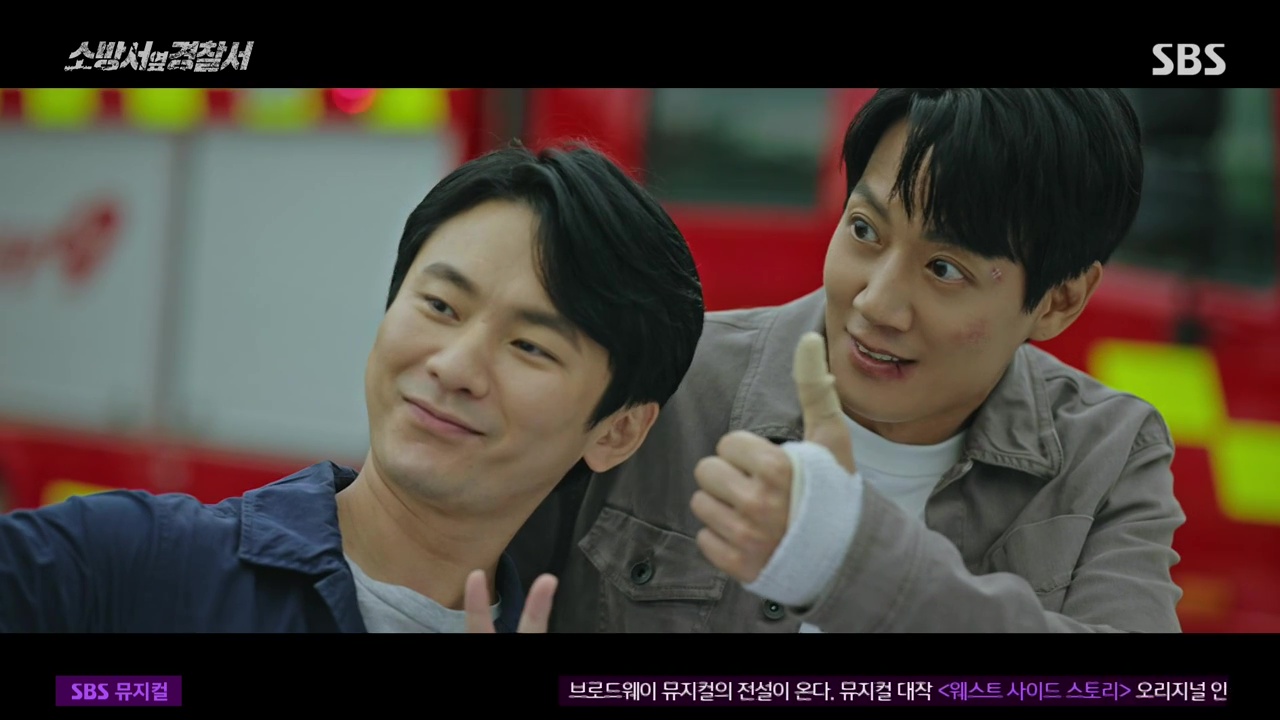 I enjoyed these episodes despite myself. I think after last week I just decided to roll with whatever ridiculous situation presented itself and it worked for me. I liked the focus in Ho Gae this week and liked the set up job TW orchestrated.
I would have preferred if he wasn't the continual saviour each week and would like the gang to finally get him out of a situation, but as the victim was himself this time, I can understand his motivation!
And I'm OK with the romance set up, he's had a hard time...😄

I like what you said! I feel the same. I am quite enjoying this after "rolling with what ever ridiculous situation presented itself" and it is kind of fun. I do like the parts where they do lots of problem solving to resolve situations and it has rekindled my love for Kim Rae won.

Yes, the problem solving is interesting and is definitely one of the reasons I'm sticking with this.

Sigh! I still have 5 more episodes to go and it does not look like a good sign that it took me this long to complete ep 7 from its orignal air date to now :(