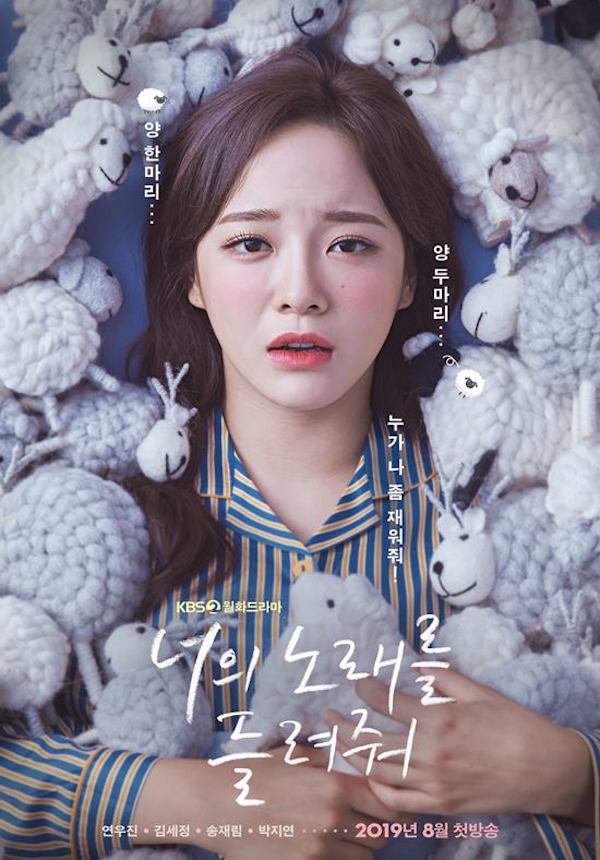 “One sheep… two sheep…” Kim Se-jung (School 2017) counts in her poster for Let Me Hear Your Song. In the teaser-trailer, it’s revealed that her character suffers from insomnia, defined as “the inability to sleep despite conducive conditions being fulfilled.” Despite tossing and turning in bed, she can’t fall asleep, and pleads for someone to help her sleep.

So how did she end up with insomnia? Perhaps it’s linked to the murder case that is at the center of this mystery rom-com drama. According to the synopsis, her character is a timpanist suffers from insomnia AND amnesia that can be traced back to the day she witnessed a murder. But when she meets a strange tone-deaf man, played by Yeon Woo-jin (Priest), they begin investigating the truth together.

In contrast to the poster above, the one below shows Kim Se-jung sweetly smiling as she sleeps with a mini-Yeon Woo-jin serenading her (I’d give a left kidney to get myself one of those.). The copy says: “Evening call? This man… Who is he?”

He’s her night errand boy, of course, who is in charge of helping her sleep with his tone-deaf songs. By day, he’s a pianist who managed to enter the orchestra in a fantastic way. On the outside, he may seem as desolate as a desert, but inside he’s hot and passionate.

Stills of Lee Shi-won (Memories of the Alhambra), playing a psychiatrist with both brains and beauty, have also been released. She is a strong supportive cousin of Kim Se-jung’s who sometimes goes overboard and acts like a helicopter-cousin. Despite her gentle appearance, she has a bit of a potty mouth and a tough demeanor.

Monday-Tuesday KBS drama Let Me Hear Your Song, written by Kim Min-joo and directed by Lee Jung-mi (Cantabile Tomorrow), will begin in August 5. 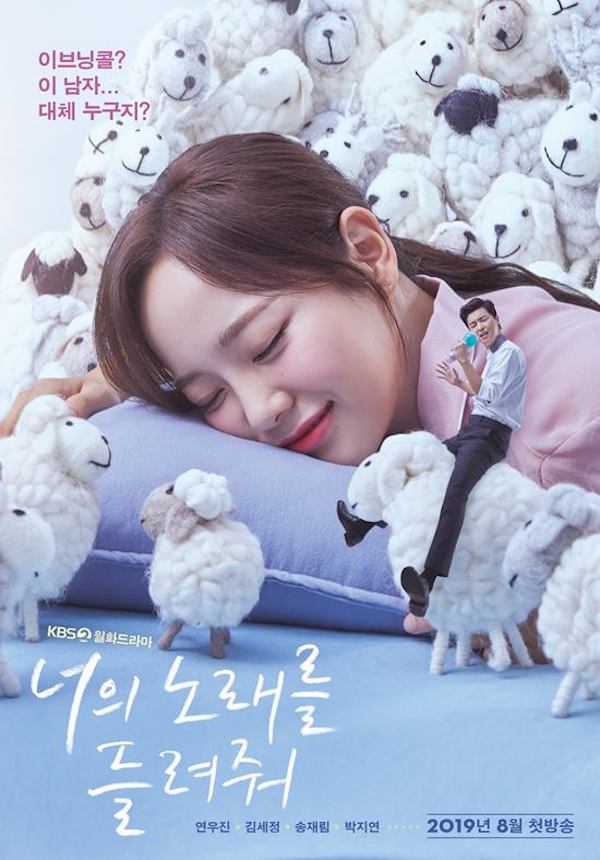 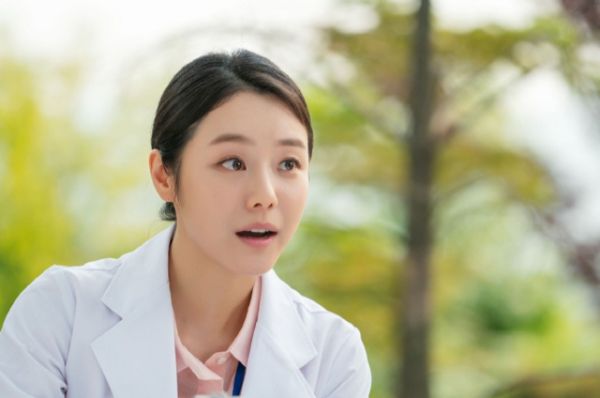 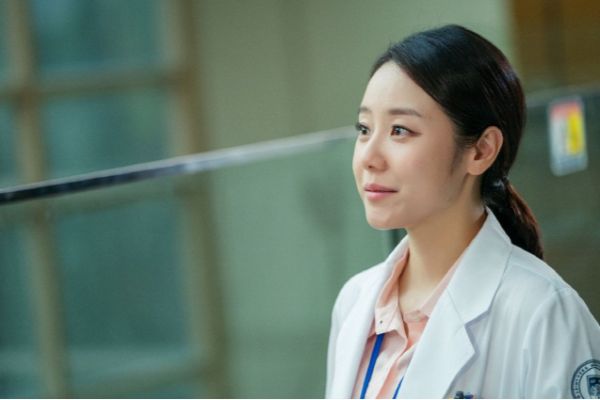 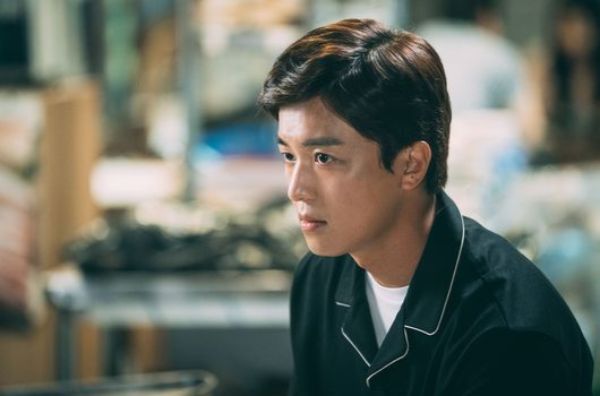 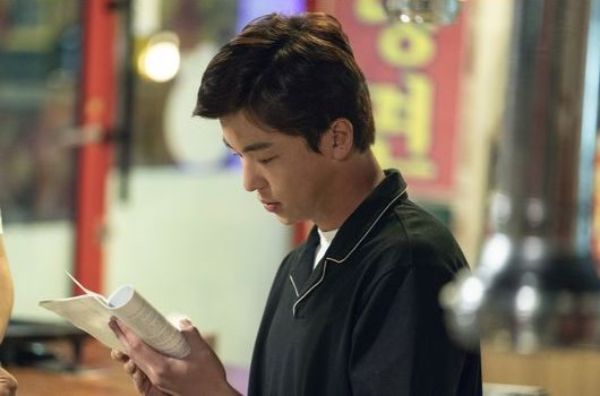 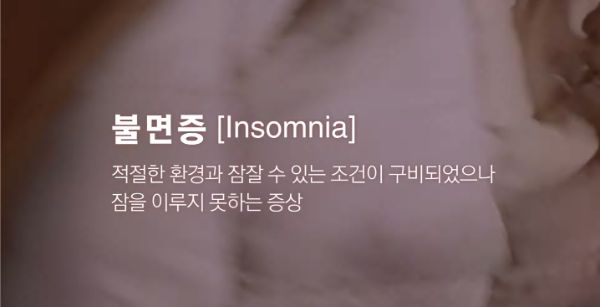 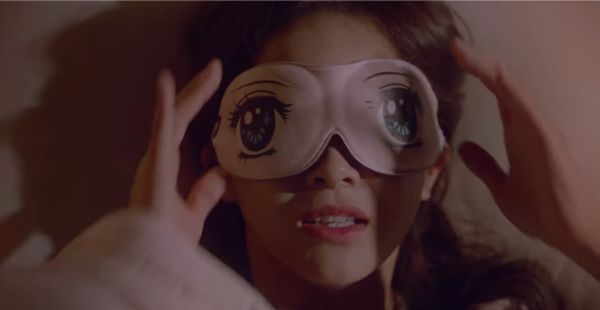 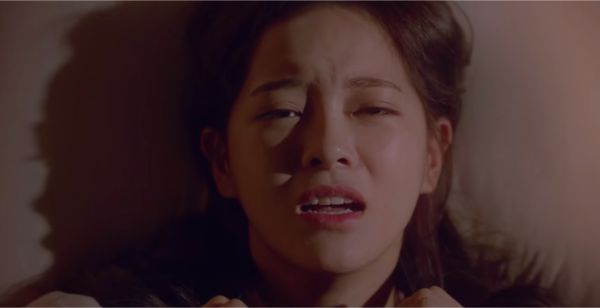 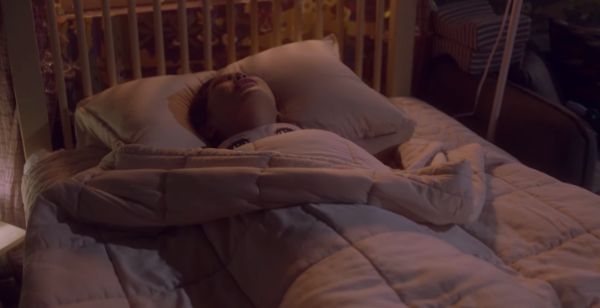 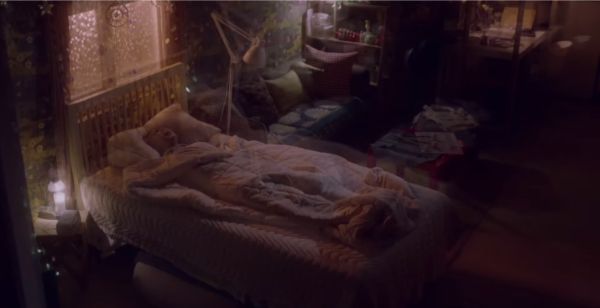 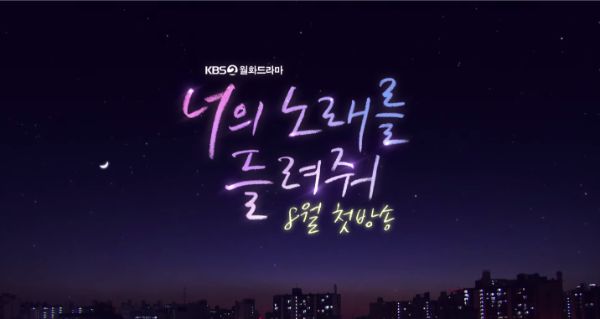 Sounds and looks really cute. I'm experiencing a drama drought right now so I'll be looking forward to this.

Time it right and you won't remember having stayed awake so long.

I couldn't pass the title "dream of sheep", Kate Bush (an English singer-writer) has a song called "And Dream of Sheep". It is part of an "operatic" set of songs (centered on the idea of a castaway woman from the moment she is lost in sea to the moment she is rescued) and the part where she is falling asleep in the middle of the ocean is this song:

It belongs to the "Hounds of Love" album. This is the titular song (excellent, if I can say so):

Here the character is fighting to the fact that, to her horror, she is falling in love.

I think Seul Gi was more convincing as a lacking sleep character. She was so funny! Kim Se Jung looks too pretty in this teaser :p

A yes, the raccoon eyes scene!

This looks adorable, and I'm excited, even though the premise is potentially overstuffed.

I am too. Really looking forward to it.

Are they so desperate for show ideas they're starting to use premise bingo?

Reads like one of those choose an item from column A, the, column B, etc that MAD Magazine did so well.

I thought nothing could get worse than a man with narcolepsy and a woman with synesthesia in a murder mystery but I suspect I'm about to be proven wrong.

If there's no faceblindness, I'm not watching.

Or at least a priest.

Yeah married catholic priest, who abandoned his wife and kids because he went to trip to France and there was a sun rising behind the statue of Saint Michael in Mont Saint Michel so he started to question himself and he went for a walk but got almost drowned by high tide and was rescued by monks so he had an amnesia and didn't remember his life, he came back to SK, became a priest and was doing some shaman rituals over possessed people

Writers need to stop mixing romcoms with murder mysteries, especially since they seem to be really bad at it.

The Last Empress, anyone?

But that show (that I love) is a makjang haha

Eh, sorry I ditched this one because it became a makjang ^^;

Queen of Mystery? (Let's pretend the sequel never happened though)

Also, The Girl Who Sees Scents? It's one of those underrated ones, tbh, but personally I found myself returning to this one quite often

For some strange reason these dramas appear like clockwork but I have yet to come across one where the writer has a clear vision for/ or an understanding of what happens when you mix these genres.

This is in stark contrast to the movie "Spellbound" (오싹한 연애) where mixing RomCom with gothic horror had a clear take on romance - and what is the often unspoken truth of pairing with someone.

Ummm... I would like to already forget about it...

I hope there's a lot of classical music.

I want those sheep, they're so cute!

Yes! I loved the way insomnia's definition appeared in rhythm with the music. Any drama that uses classical music extensively has my heart.

"...she sleeps with a mini-Yeon Woo-jin serenading her (I’d give a left kidney to get myself one of those.)."

You took the words right out of my mouth! I'll even give my accessory organs to get one of those umm tone deaf mini Yeon Woo-jin. HAHA

"...she sleeps with a mini-Yeon Woo-jin serenading her (I’d give a left kidney to get myself one of those.)."

You took the words right out of my mouth!

11 egads aka Dame Maggie with a heart of coal

The little stuffed sheep in the poster are cute.

I hope they sell those stuffed sheep. I just fell in love at the first sight

Shaun the sheep is a cute one, you can have one of those until than.

I have one such sheep already, bought that one three years ago, they are super common in the Netherlands.

My favorites are the ones who look like little English barristers with the wig on top!

Is it a good sign that the sheep props are getting more attention than the drama's story line?

12 Katakwasabi wants a Frodo plushie (the kakao emoji, NOT the hobbit!)

I want one of those sheep plushies. Cute sheep looks like fluffy clouds~

We agree on so much. Are you sure you're not me?

Add in face blindness and you have our new hit drama.

So the two of you are twins separated at birth? Maybe your real identities are chaebol heirs, forcefully separated to protect you from the corporate rival's agenda.

We are royalty seperated at birth and kidnapped from the palace to give way for Royal Hotness to ascend the throne.

I'm the twin bent on revenge, while you can be the one haunted by the disturbing images in my head.

The biggest obstacle to my revenge is my face blindness that prevents me from recognizing everyone I want to torture. However, faceblindness does not prevent me from having an amazing coat collection brought to you by fashion ppl. I also like to vacuum. A lot.

I'll be probably be brought down by a camera and tracking device in my Roomba, which I have named Lil Dusty.

Oh no. I'm never haunted by the disturbing images in your head. I'm disturbed you are rummaging my wardrobe for my awesome coat collection thinking their yours. Return my coats back, if not revenge of coats might happen.

@katakwasabi Excuse me, but those are MY coats. I do not need to rummage through your inferior (and tiny) coat closet, because I have a dedicated coat room, thank you very much. Pfft, next you'll probably be claiming that my earrings were originally yours. Family is so tiresome.

Oh @egads...Since you're bent on revenge, your memory seems to be distorted.

But you're family, I will magnanimously let it go. I have a fashion empire and a warehouse full of coats, suits, dresses, loose pyjamas, you name it...call me if you need styling advice. By the way, I don't wear earrings. I only wear rings, one of it is a nail ring *twists*.

I don't want to start a feud with my beloved twin so soon after we found each other. Family should stick together, but sweetie, I'm not the one that needs fashion advice, and certainly not from someone sporting a frizzy multicolored wig that is obviously constructed from some sort of man-made-material. Oh, and nail rings are so last year.

*adjusts gun holster underneath my stunning leather coat. (Yes, it's a bit warm for leather, but I have an image to maintain)

What the hell did I just read.
I want to watch it. Just so I can see if it’ll turn out to be a horrible or just strange mix. Honestly it might both because I’m doubting it’ll be good. But you never know, it might just work and surprise me.

ahh the posters are so cute and pretty to look at, can't wait to see se-jeong again!

Funny poster. Will check out the premier to see how it is.

Do they never use bed linen in SK?

You wonder, don't you? From watching dramas the answer is pretty much no (except at hospitals) and everyone sleeps in their clothes.

And with makeup and wonderbra. I find it odd.

While the amnesia angle has me less than thrilled, the characters and setting intrigue me. Add in Yeon Woo Jin (who I've appreciated since Arang and the Magistrate) as a pitchy sleep-aid and Kim Se Jung AND Song Jae Rim and I'm looking forward to it.

this sounds so ridiculous that i want to watch it LOL

Kim Se Jung is getting matured each day miss her in School2017 Hopes this drama will be well received.Hoping for best for Se Jung. 🎆🎆🎆🎆

Can Can from Offenbach's Orpheo in the Underworld (the piece in the video):