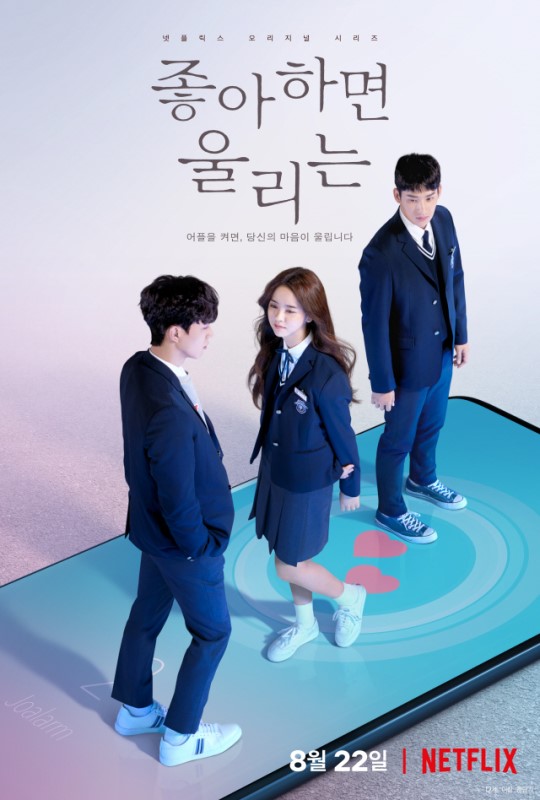 Aww this looks adorable! Netflix’s Love Alarm, which was first announced way back in early 2017, is finally premiering next month, and we finally have the show’s official poster and our first teaser for the webtoon adaptation featuring Kim So-hyun (Radio Romance), Song Kang (The Liar and His Lover), and Jung Ga-ram (Mistress).

The youth romance centers around a fictional phone app that alerts you when someone within a ten-meter radius has a crush on you. Which sounds like a horrifying prospect to me if I were a high schooler. It certainly complicates things between two best friends, played by Song Kang and Jung Ga-ram, whose characters are the prickly, cold type and the sweet, warm type, respectively. Of course they are. They naturally get involved in a love triangle with Kim So-hyun’s character, who is a hardworking, Candy-type.

In the teaser, Kim So-hyun installs the phone app and wonders what it is to like someone. Well, it sounds like she finds her answer really quickly, because she’s confronted by Song Kang who directly asks whether she likes him. The next thing we know, the two high schoolers are a couple, sharing a cute hug on school grounds and going on a seaside scooter ride.

Unfortunately, Kim So-hyun has another admirer in Jung Ga-ram, who determinedly enters her ten-meter range. She says, “The moment my love alarm rang, my body rang with it.” Jung Ga-ram makes his move as well, approaching Kim So-hyun and saying that he’s waited for her. This, of course, drives a wedge between the two friends, and they decide to let Kim So-hyun’s character make her choice between them. It looks like the show will move beyond high school into the characters’ college years and maybe even beyond, judging from the teaser.

Directing the show is Lee Na-jung, who co-directed Fight My Way and Oh My Venus, which I’m taking for a good thing since they both had very sweet couples at the center of the shows. Writing is Lee Ah-yeon and Seo Bo-ra, both of whom only have one other credit, having co-written last year’s Coffee, I Leave It To You. I’m usually a bit warier of writers with such a short resume, but since there’s a solid source material to adapt the show from, I’m less worried than I would be with an original show.

Netflix will be releasing all 8 episodes of Love Alarm on its platform on August 22. 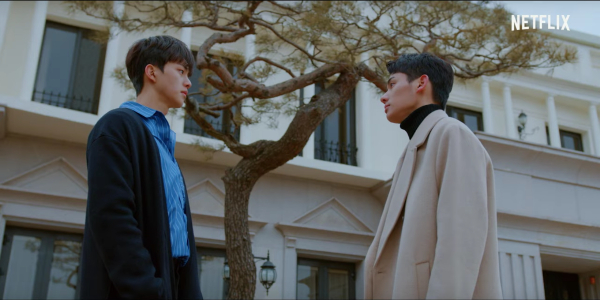 The teaser is gorgeous and nicely filmed. I'm already anticipating the chemistry and heartbreak.

If this phone app existed in real life, my app will never alert me...

I'm sure that is absolutely untrue but I find it interesting that the drama might cover that aspect as well. Many young people must feel and think the same thought. Intriguing concept.

I just hope this adaptation uses the concept well and adds something new to this youth drama!

I'll be looking forward to discussions regarding the social implications of having such an app exist. I get the feeling the 'love triangle' will be entirely guided by this consequence of 'manufactured feelings'. I could be wrong since I haven't read the source material.

Same thoughts! I also haven't read the source material (and won't probably do so) but I will check out this drama for So-hyun.

Also, the app made the characters look like they're playing Pokemon Go. Gotta catch 'em all, I guess.

Even swiping right on Tinder makes me nervous. I don't think I can handle this app. huhu

Why am I already conflicted about who I want her to end up with? And why do I feel like it will be the person she doesn’t end up with? lol these high school dramas and their second leads man...

Interesting! I just assumed the Jung Ga Ram was the second lead! Can’t wait to binge this one..

If I learned anything from Cheese in the Trap, it's that K-Dramas don't have to follow webtoons at all.
(That was a hard lesson to learn.)

"they decide to let Kim So-hyun’s character make her choice between them."

Now that's a first, male leads that actually respect the decision of the female lead. Props to that.

Feeling the same! The teaser is really really good! Good luck to the casts! 😁

So many youth drama! Even if Mr Temp. is an adult, it's about young people, there are still A Moment at Eighteen, Love Alarm, Seventeen years old's Condition (mini drama), A Day Found by Chance \o/

How much of this drama will be set in high school and how much beyond I wonder? I'm getting japanese drama vibes from this so I guess I should prepare a box of tissues. KSH is ethereal in the teaser though.

I agree. I somewhat got an anime-like vibe from the teaser, somewhat similar to the likes of Your Name and Weathering With You. This looks promising and I'm definitely keeping an eye on it.

At first I thought it’s just a youth high school romance and typical triangle love, but then I realized it’s not what it seemed to be. There is reasons why the webtoon are well loved and it’s because it has touched on social issues. Imagine if you love someone or think someone loves you but the app says otherwise, how much awkward the situation could be. Imagine if your friends app alarm rings often but yours never ever. As how much insecure the youngsters already feel with the popularity and being judged. The webtoon did really well so I hope the drama will give justice to the webtoon.
As for So Hyun, it’s almost two years since her last drama and judging from the teaser, I think it’s safe to say it’s worth the wait. Song Kang and Ga Ram may be rookies but so far they did their part well, esp Ga Ram, his eyes are full of emotions. Can’t wait for 22nd Aug, esp with all 8 eps release at once!

If it really is some kind of mystical app that just KNOWS, like without any input from the person who is ~doing the liking, that is indeed kind of creepy.. (as well as the obvious reverse, ie potential stalkage issues) but am I the only one worried about how such an invention would affect ~closeted people?? Would they even download the app?? Or could they just avoid it?? (& does the app only tell you about other people who also have the app, or any "living being" in general near you? o.o) Would "not participating" even be possible in such a popularity-hyped culture revolving around such a ~revolutionary concept?? As if regular peer pressure & bullying isn't bad enough.. ;((

i kinda wish such a thing exists LOL

she looks so grown up! omg

ikr! she's not even a teenager anymore irl! 😮

This is a refreshingly thoughtful and poignant teaser for a youth drama. Looking forward to it.

The Korean title is interesting! "When [You] Like, It Rings"? @raonah, Korean Learning Gang, what do you think?

Doesn't translate well, huh? I guess that's why they changed it.

Facebook & Google probably know enough about us so it doesn't have to be fictional much longer...
...then think about how they could monetize it...
...the free version could come preinstalled , then suggest you upgrade to the paid version to see who it is that likes you. For even more money the deluxe version would let you turn it off. Think called-id and paid caller-id-blocking.

Since it's 8 episodes, do we think this is going to be a season 1 / season 2 thing like what Netflix has been doing with the other dramas? I don't want to watch this and end up with a cliffhanger at the end!

I think it’s 99% percent ending at a cliffhanger though

I hate how Netflix does this! It defeats the purpose of the kdrama episode-airing formula for me!

Ever since I heard about this, I always felt as though it was gonna be cute and fuzzy in the beginning but turn eerie and dangerous because the app goes terribly wrong hahah, but maybe it was just me.

Love how this looks, can't wait to watch!

Teaser looks ok, but I want to watch the premier to make up my mind.

It won't have a premier you have the whole series to watch on the 22nd August. Have fun 😁

Usually Netflix drops 2 episodes a week for k-dramas. This one will be different?

Netflix only does that for dramas it doesn't produce. This one an original drama produced by them so they'll release the whole season at the same time. They do this for everything that is their own production like stranger things or the crown.

I've been looking forward to this for years, but strangely I'm a little disappointed. I just really don't feel that Kim So-Hyun fits the role. I will still watch and hopefully enjoy it!

How does she not fit the role? Apart from the fact that she is a chameleon actress and was the author's first pick for the role should the webtoon ever be made into a drama, this is exactly the kind of role that she excels at. Netflix waited on her for months to confirm the role and didn't even consider anyone else for the role because of the fact that she was a 100% fit for the role and her mad acting skills. The director also said that only Kim Sohyun could have played this role and bring depth to it. Not to mention all the netizen dream casts always had her as the top pick because she looks exactly like the webtoon character.

I guess it's just me! But I am still entitled to my opinion. I happily enjoyed the drama and think she did well in this role! But for me, in the webcomic, she was a very youthful, comical character. Slightly spazzy too. Kim So Hyun always comes off very calm and mature to me. She also did come off this way in the drama, and while I did love it, the sometimes humorous tone of the webtoon didn't come out at all in the drama, as the producers/writers/directors decided not to go at that angle. That's all! :)