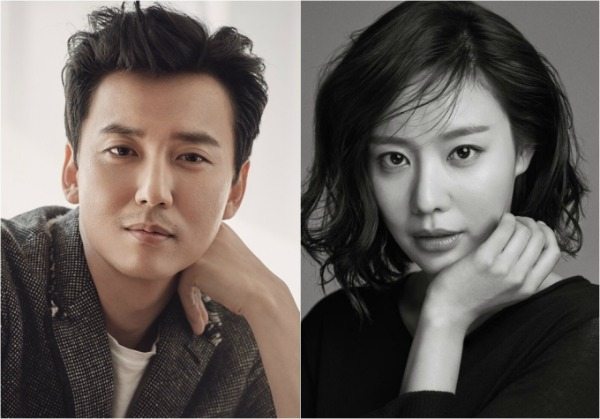 I’d been praying for Kim Nam-gil (Pandora) to return to dramaland after his four-year absence from the small screen, and voila, my prayers have been answered. Ask and you shall receive, so sayeth the drama gods. Kim Ah-joong (Wanted, Punch) has also confirmed a starring role in the upcoming tvN time-slip drama Live Up to Your Name, which has also confirmed its airdate.

Kim Nam-gil will play the real-life figure Heo Im, a skilled acupuncturist hamstrung by his own origins, who eventually advances the practice of acupuncture in 17th-century Joseon. Fun fact: Heo Im was a contemporary of the famed medical practitioner Heo Jun, although it’s unclear whether the more famous Heo will play a part in the drama. Heo Im, wayward because of his bleak prospects due to his lowly status, somehow travels 400 years into the future, where he meets Kim Ah-joong’s character, Choi Yeon-kyung. She is a resident in the cardiothoracic division, and projects a perfect, icy-cold image, while being deeply scarred on the inside. She doesn’t believe that acupuncture has any medical benefits, which should put her squarely against Heo Im ideologically when he drops into her 2017 life in Seoul.

I’m not too fond of medical dramas in general, but the combination of the time-slip element, Kim Nam-gil, and the director, whose last project was Dear My Friends, are enough to have me really interested. If nothing else, I’m really looking forward to Kim Nam-gil’s fish-out-of-water antics when he finds himself in modern-day Korea. Sources say his character will have a comic bent, which is great, because I’ve wanted to see him do more comedy. I was also interested to read that the drama will be a “two-way time-slip” fantasy medical show, which could mean that Kim Ah-joong’s character also travels through time. I’m kind of hoping it does, ’cause two fishes-out-of-water are better than one. But NO brain fetuses, ya hear me, Show?

tvN has confirmed that Live Up to Your Name will air in their Saturday-Sunday slot in August, following upcoming Forest of Secrets.

Ok, so I wrote a whole comment about how, after catching up with Tunnel, I might be ready to be done with time-travel for a while (I love it, I swear, I'm just seriously starting to wonder whether 50% of the dramas I've watched involve it, lol).

But then I saw that this could have them both travelling through time and now THAT could be interesting.

Not to keen on the medical stuff (though the acupuncture aspect seems cool). Or on Kim Ah-jung, tbh, but she isn't all that bad so I'll give her a chance.

I don't think I can get enough of time-travel stuff....that's like getting tired of romance, just won't happen for me.
So I welcome thee, time swap medical drama.
Though I'm less thrilled about the medical part...kind of had enough of those for a while. lol However, the director of Dear my friends? It's a must see for me alone for that because DMF is my second most favorite kdrama.

We drama fans can not be trusted to get enough of any gener specially when there's an intriguing plot and favorite casts, I was complaining about how i am tired of thrillers because I've watched all the thrillers this year, but then the upcoming thrillers came in the picture with thier shiny teasers I forgot about all that and decided ti watch them.

Time traveling is one of my favorite geners.

Thanks for more news on LIVE UP TO YOUR NAME, tipsymocha. It's sounding more and more interesting. A comedic acupuncturist? Now you've got me pondering my funny bone meridian. ;-)

Oh cool, it would be like Faith but in reverse.

I''ve seen her since 200 ponds beauty and also sometimes her drama. She's good but not actually my liking so I guess I'll pass this time.
but this is Kim Nam Gil, I waited for him since forever so I got some headache to decide

seriously! which dramas, or how many, has his character actually LIVED in the end????
: (

LOL IKR? Fingers crossed there's a clue in the title wording, LIVE Up to Your Name

XDD. It would be hysterical if he died after all. I'm not sure I would take the scene seriously.

Now the drama look more and more promising.. but a question still lingered unanswered: will KNG character live up to the end?

YAYYYY KIM NAM-GIL IS RETURNING!!! AND DOING SOME COMEDY!! Not really sure about the medical side of the drama, nor about Kim Ah-joong's character - cold and clinical, not sure if she can play that well, but hoping for the best for her and that she'll be able to have some comedic beats too. I really really want for her to be able to travel through time too, like come on, dramaland, what's it take to get a girl to time travel huh?

First thing in the morning when I opened Dramabeans and BAM ! This news just made my day :D

Now I'm having two major must-to-watch dramas, this one and Lee Jun Ki's Criminal Minds. Aah.. what a good time to be a fangirl~

YAAAAAY!
I am so excite and yessss at comic bent.

Such a waste that kim nam gils new drama will be with that plastic surgery monster....

Because that's so beautiful to call another monster.

Will the nation corpse die again in this drama??

Kim Nam-Gil back to my small screen? Yes please!

Someone at TVN really loves stories that feature time travel or extended flashbacks to another time!

IKR! I'm not against it but my initial reaction was another time travel? really, TvN?

He's not.... going to die here right?
I don't think I can watch another Kim Nam Gil character death.

sometimes I wonder whether he won't take any offer if the role he played will stay alive until very end.
even in Pandora he chose his own death *sigh*

Okay that brain fetus really made my nightmare.

I can't miss out Kim nam gil's return and the time-slip scenario only makes it more intriguing. i hope it's good.

Time travel is the trend these days... huh?

I'm excited for this.

May KNG character stay alive though it all !

I'm iffy about KAJ, but if the script is good, it wouldn't matter.

Definitely watching this! Double time slip is interesting and I'm curious to see how acupuncture is portrayed.

Oooh! Sageuk and modern KNGs, and not necessarily dead (see what I did there? ?) serious? Can.Not.Wait!

A 2-way time travel???? That's freakin the best idea ever! Why has no one ever thought of this before? If that's really gonna be in this drama I am 1000% watching it.

I can't wait. Been waiting for KNG in dramaland for a while now.