Acupuncturist versus surgeon for Live Up to Your Name 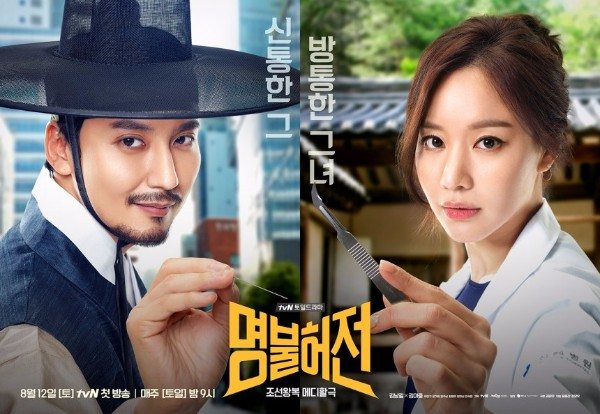 More promos are up for tvN’s next Saturday-Sunday drama Live Up to Your Name, which is a combo of some of the best 2017 trends: a medical-sageuk-timeslip fusion drama. Kim Nam-gil (Shark) and Kim Ah-joong (Wanted) are headlining, and they are both playing medical professionals, albeit ones with completely different philosophies and from different time periods.

The poster above says: “Miraculous and talented him and her,” as they both hold up their respective tool of choice—a needle for Kim Nam-gil and a scalpel for Kim Ah-joong. The latest teaser shows both of them in their respective time periods on their way to work.

In old Joseon 400 years ago, Kim Nam-gil’s character runs through the palace gates, going to the Chinese medicine pharmacy. He announces himself to the people as Heo Im, and says he’ll do his best to treat the patients, and we see brief flashes of him working his needles masterfully. According to the second poster, the drama will show the story of what happens when he, Joseon’s best acupuncturist, meets Korea’s best surgeon, played by Kim Ah-joong.

Kim Ah-joong’s part of the teaser begins with her speeding down hospital corridors. When she arrives at the OR, she flings off her gown and says she’ll lead the surgery. Then we see her all prepped in a gown as the teaser ends. The recently released stills show various scenes of the drama, including Heo Im suddenly taking Kim Ah-joong’s pulse. I can almost feel the slap coming…

Live Up to Your Name will begin starting August 12, taking the timeslot recently vacated by Forest of Secrets. 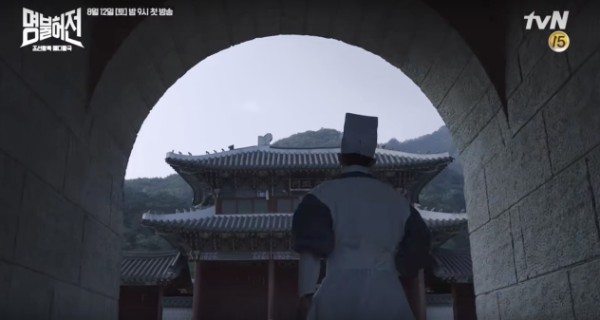 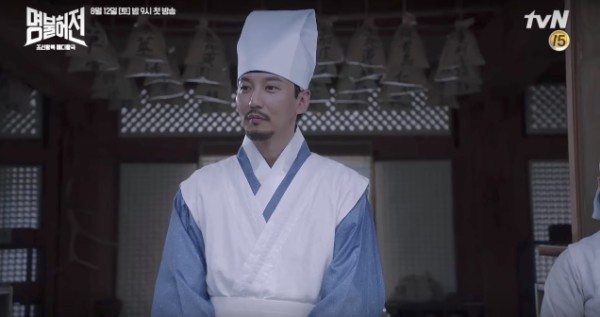 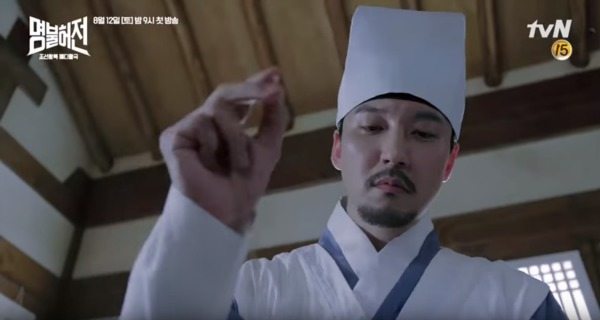 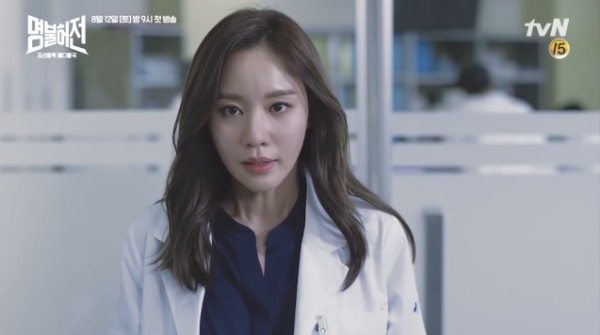 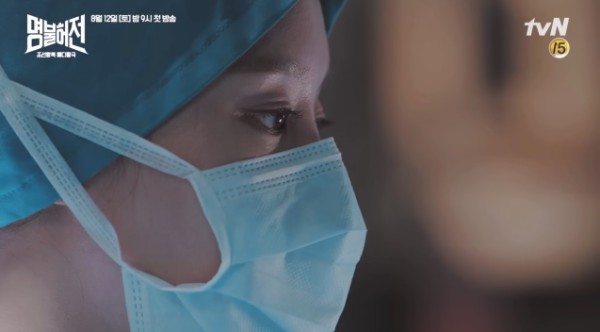 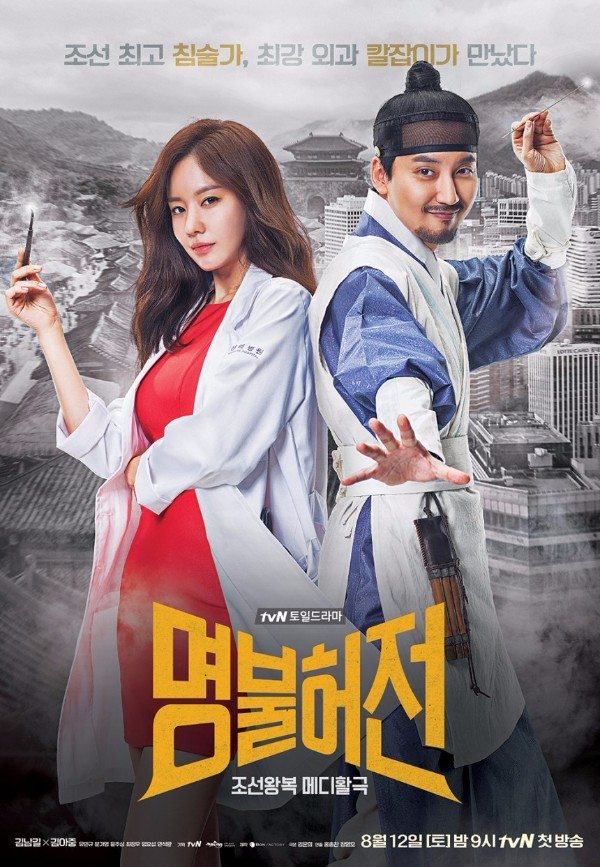 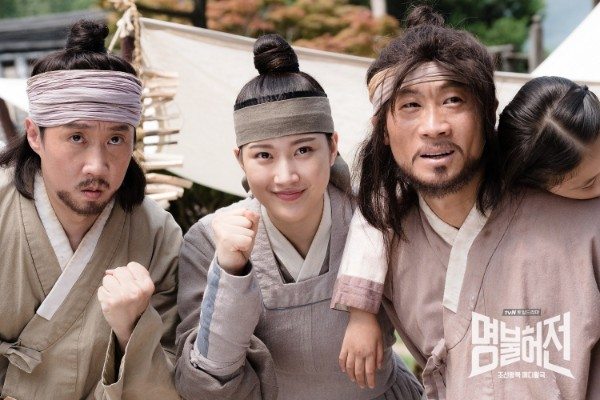 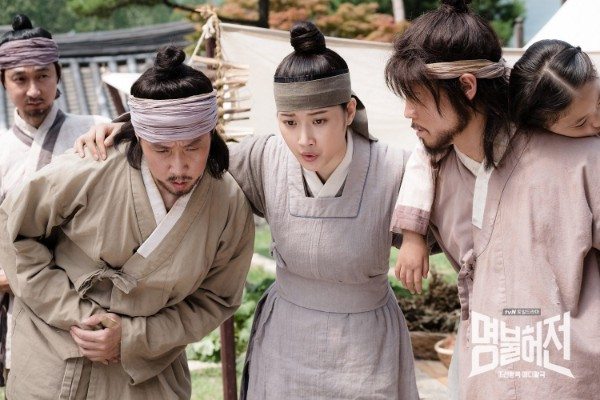 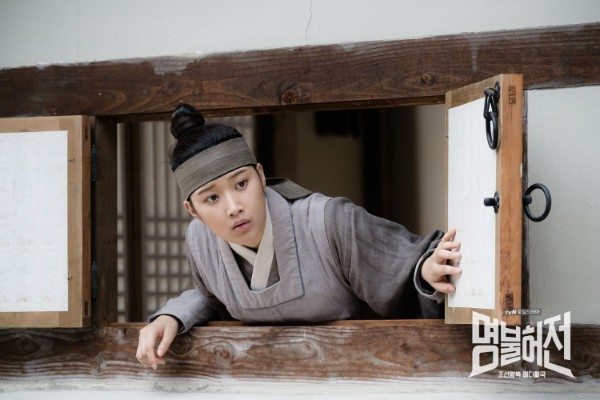 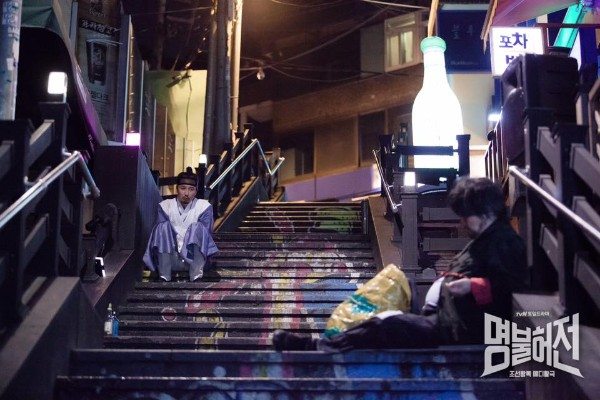 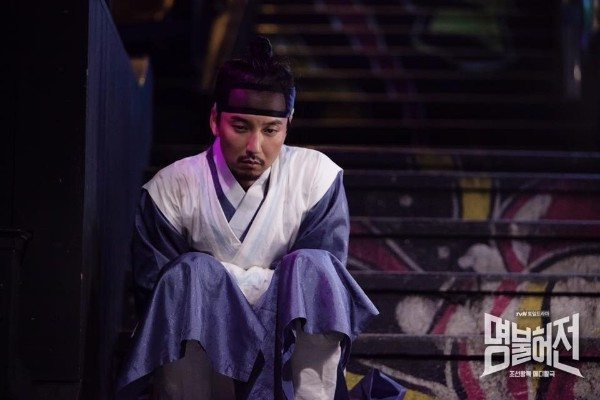 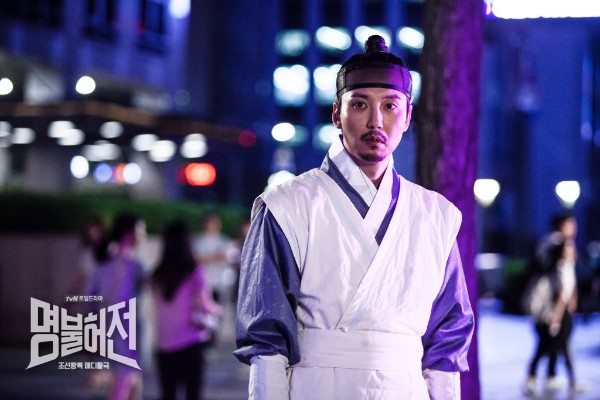 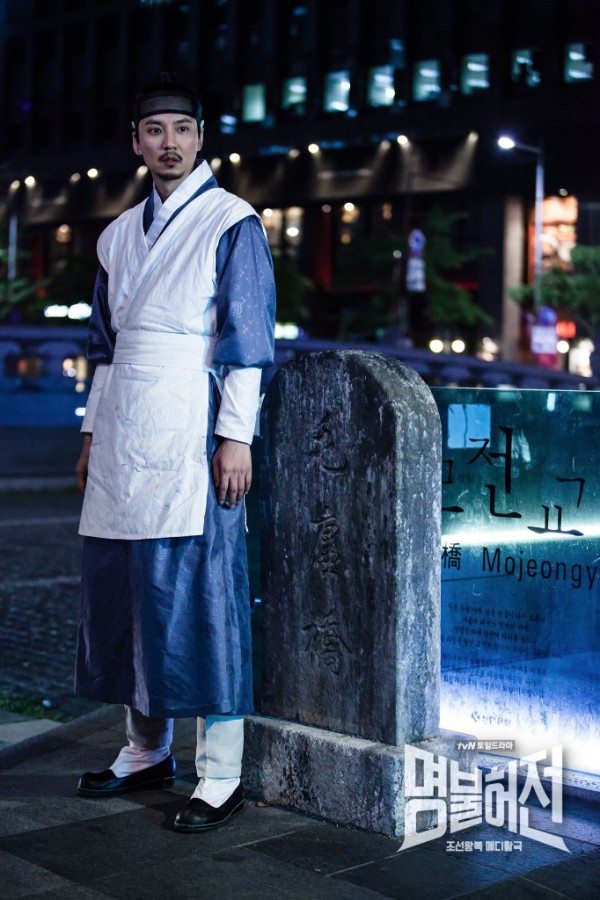 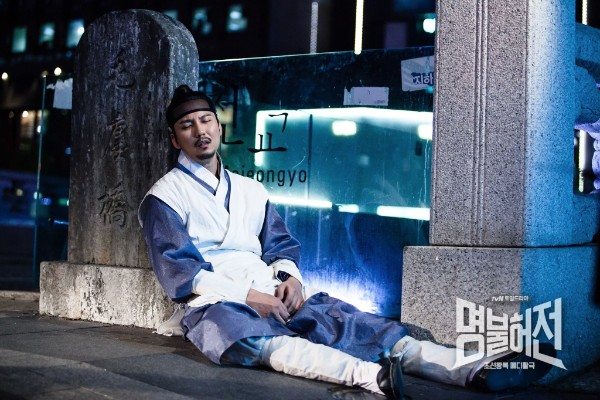 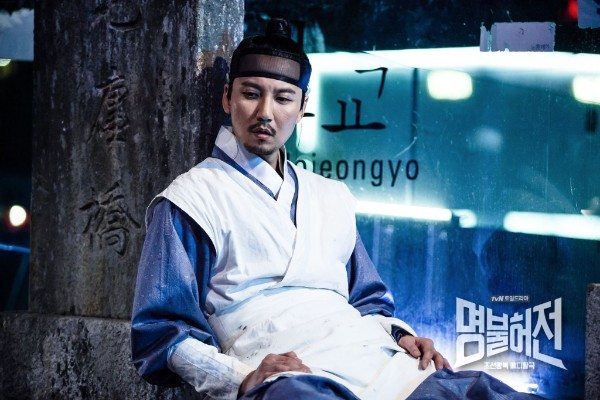 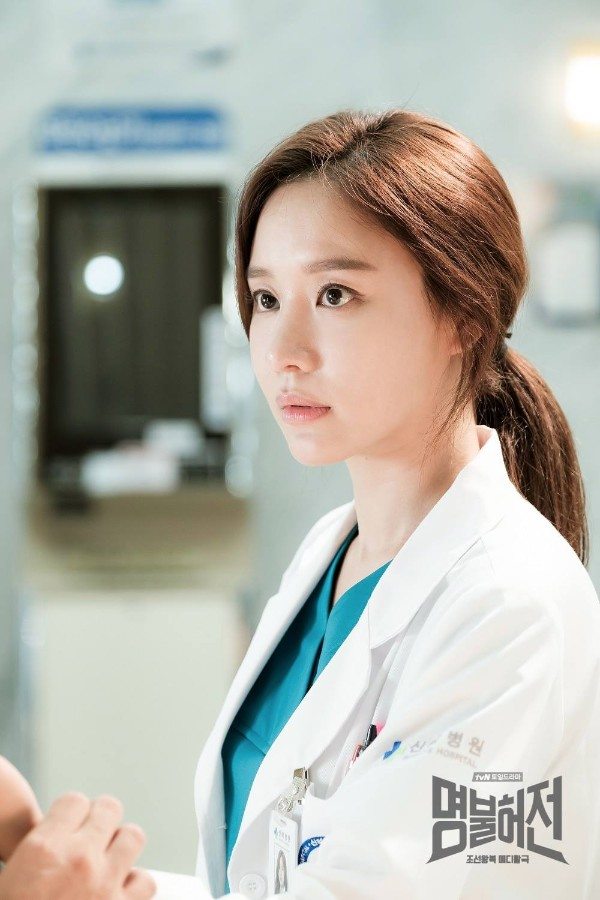 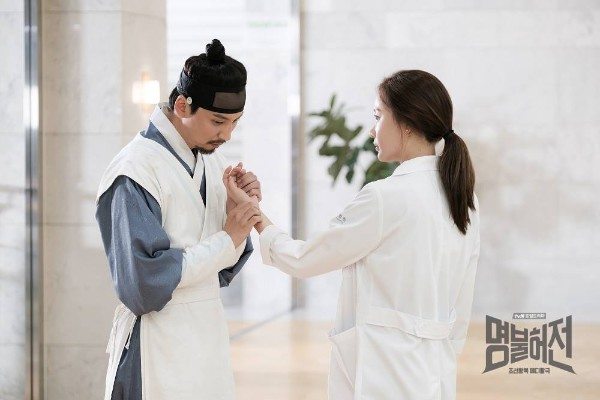 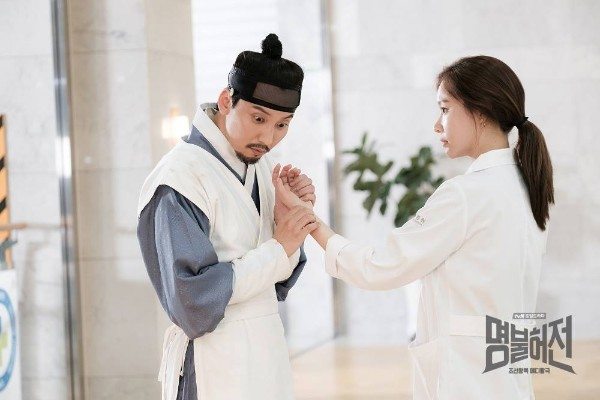 Yay! It looks hilarious! And is that Ppal Gang from Jealousy Incarnate?

I'm not usually into medical dramas but this one is definitely different enough to be interesting.

Does this mean DF will carry it? Since Forest of Secrets is over (btw the best drama this year). Hope so because this and Save Me are the only two new ones I'm really looking forward to. Kim Nam gil, Yay!!

Good question. It is not listed on their "coming soon" page.

This has been what I've been worrying about. DF haven't listed it as an August drama they're picking up. And it doesn't have a license on Viki either. Kocowa is for the 3 main channel dramas not TvN. Which makes me worried no one will pick it up! :( :(

Anyway, will we ever see Heo Im throw away his Joseon costume and dress up in a suit (or at least casual clothes) or getting the newest smartphone from Kim Ah Joong's character? Because no one in modern k-drama can live without fashionable outfit and their smartphone..

Thank goodness this is a TvN show so I can watch it! (Boo, hiss to kocowa)

I watch all of mine on http://www.dramaload.se
you can watch all the shows (even week by week recent ones) streaming for FREE

Not so sure, it is not listed on either DF or Viki. Viki has it as "restricted access" which basically means not.

Boo, hiss at Kocowa. But, it seems that the dramagods are looking upon us favorably for now, Strongest Deliveryman (KBS) will be on Dramafever so...

I can't help but being reminded of Faith. I hope it would be fun to watch. The plot and all these stills make this drama very promising. I will give it a shot because of Kim Nam-gil <3

Medical-sageuk-timeslip fusion!??!?! Why not throw in some zombie prosecutors?

wow, a timeslip to the future with kim nam gil and kim ah jong,
I'll tune in for sure.
For the character, just be safe, especially near the end of the drama.

I'm going to watch this. It reminds me of Dr Jin, in a nightmarish kind of way, and Kim Nam-Gil looks like SSH, only difference is, one can act and the other overacts.

Glad I'm not the only one who immediately thought of Dr.Jin. Man+ Doctor +Time Travel = me backing away in fear. That was an impulse reaction though, I'm willing to give this a shot, if only because if it's bad it'll definitely be hilariously bad.

Dr. Jin is one of the few shows where both the Japanese and Korean versions were REALLY bad.

It's a classic to me because it was so bad, and because I loved Heads' recaps. They were hilarious.

So excited for both dramas premiering next week: Manhole and Live Up to Your Name! They both look so funny and wacky. I need more comedies in my drama plate because Falsify and Reunited Worlds sure aren't light!

It seems they both travel to each other's respective timeline, I like that. Usually its just one person who time travels, but if both follow each other, it'll be much more fun ;-)

So, I'm a bit confused, how will the time-slipping work? Will they continuously exchange places in time (ie Heo Im being in Ah-Joong's tim and Ah-Joong being in Heo Im's time), will they exchange who is where?

After watching Rooftop Prince, I kept thinking that I would love if the modern time was half-ed, and when the men returned to their time, Park-Ha would follow. Thus, the tables have turned, but because Gak and the boys hav ecome to care for Park-Ha, they try to help her adjust as Park-Ha also realizes the feeling of being lost in time, etc.. At least I thought it would be interesting to see the dynamics change that way.

So I'm already kind of in love with this show, where at least we know the two characters will go back and forth about when/where they are.

Just going by the pre-broadcast hype, this is one that could go either way. One problem with medical dramas is they are often so full of Really Bad Medicine that it distracts from the story. Will wait and see.

This looks so fun! I love time slip dramas! I'm so in!

Do check out the longer version trailer too... https://youtu.be/4iPm-eVFrSw.
It's hilarious ???

the last 'medical timeslip' drama I watched was faith, so for this drama I hope you will 'Live Up to Your Name' ^_^