Nothing to Lose adds Dongha and Haeryung to its lawyer lineup 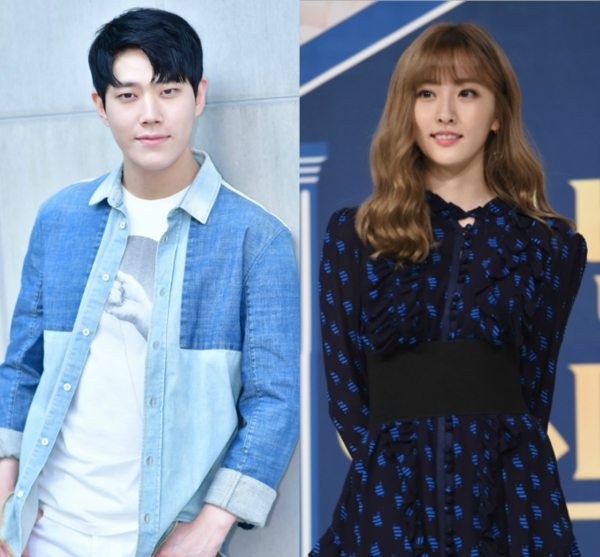 We’ve got several more lawyers to add to the mix in SBS’s upcoming courtroom drama Nothing to Lose. Up to join Park Eun-bin (Age of Youth 2) and Yeon Woo-jin (Seven Day Queen), who are both still considering their offers to star as judges, are Dongha (Suspicious Partner) and idol group BESTie’s Haeryung (Star of the Universe).

If she accepts, Park Eun-bin will play a ticking time-bomb of a judge, who regularly works herself into a temper in court, especially if the source of her ire is an unrepentant defendant. Nothing to Lose will revolve around her fight against the big, powerful baddies that framed her older brother for a murder he didn’t commit, and killed him as well. Yeon Woo-jin is considering the role of a fellow judge, though his temperament is much more suited to his occupation than his colleague. Described as cold-headed and warm-hearted, Yeon Woo-jin’s would-be character is called the “wise Solomon,” and will maintain a hard-to-define relationship with Park Eun-bin’s character. They’re peers and rivals, at times at each other’s throats, and at other times acting like a new couple.

Dongha has been offered the part of a very capable prosecutor who graduated with Park Eun-bin at the top of his class. Once he’s latched onto a criminal defendant, he doesn’t ever let go, earning him the nickname “Mad Dog” (heh), and always challenges directives from above he believes are unjust. It’ll be interesting to see whether he’ll aid Park Eun-bin or work against her, especially if he is under the impression her brother was a murderer. Dongha is certainly broadening his range with every role, going from petulant chaebol heir (Chief Kim), to a psychopath (Suspicious Partner), to potentially a prosecutor here. I hope he does pick a project soon, even if it’s not this one, ‘cause I’m eager to see him back on my screen soon.

Reports have gone back and forth on whether idol-actress Haeryung has already confirmed her role, but the character she’s up to play is still a law school student with a pretty colorful background: She’s a third-generation chaebol as well as a former idol, but she also has a very quick mind that would excel in the legal world. Unfortunately, her gold-spoon background is a source of prejudice from those around her, but that doesn’t stop her from pursuing a career as a judge. I don’t think I’ve ever seen BESTie idol Haeryung in a variety show, let alone a drama, but I’m going to try to be optimistic and hope for the best regarding her acting abilities.

Nothing to Lose will follow While You Were Sleeping in November, in SBS’s Wednesday-Thursday slot.

Tags: Dongha, Nothing to Lose

Ooph my heart aches a little seeing that Park Eun-bin will have a “hard-to-define relationship” with the male lead....

Please let it be defined, even if the definition comes at the last minute of the last episode. Or declare that there will be a whole other season for the definition to take place, to clarify, or to give meaning, while nvody dies in a number of years in which one can count with fingers. Thank you in advance.

My source for the Age of Youth 2 videos didn't include the epilogues. I was really bummed at first, but now I'm so relieved because as far as I'm concerned, they didn't happen. Song Ji-won is gonna be a kickass halmoni in my universe.

I don't think i will get over the AOY trauma anytime soon.

Hello fellow traumatized beanies. We should start an AOY support group. I have been watching Ssongsungmin FMV's on YT on repeat. Anyone has any better ideas? Should we pray to spiritual father so our wishes will be fulfilled? Lol

Yes, please guide me to the light, fellow Beanies. Watching Ssongsung FMVs now makes me feel like a grieving widow watching her wedding video on loop like Bruce Willis in The Sixth Sense (.....shivers......wait, am I now becoming the ghost haunting Ji-won? I am definitely Sasaeng now without question)

The AOY support group will spare the people around me from my rants therefore salvage my relationships with whom I love.....

I laughed then i cried. Count me in for the support group.

I like the "hard-to-define" relationship if it is done properly. Though I also do hope for some clarity at the end.

My main concern with this drama is that it doesn't sound very interesting at all.

Any show that adds Dongha has nothing to lose. I hope he doesn't give me a bad case of Second Lead Syndrome.

I see what you did there and appreciate it 😁

Haven't watched any of the dramas they're in before so I'm hopeful still about this story. I really like the ticking time-bomb of a judge premise.

and so far I'm still not getting fed up with legal dramas, *crosses fingers* yet.

Lmao why does this sound like Jiwon/Sungmin rs .... Park Eun Bin character seems like a mean jiwon and yeon woo jin sound like a lot like sungmin role.This could be gold or a disaster tbh.

OK with the addition of Dong-ha, this is going to be more interesting. Maybe Dong-ha declined I Am Not A Robot because he wasn't ready to be a male lead yet. And this drama sounds a better choice for him imo.

I love the idea of Park Eun Bin, Yeon Woo Jin and Dongha all together in one drama!
Though I'm less crazy about watching ANOTHER legal drama...

Yay me too
I'm actually tired of all those court room drama but I can't resist Park Eunbin, Yeon Woojin and Dongha all in one drama

I like Dong Ha ever since Chief Kim. It would be very interesting to see him as a second lead. For Park Eun Bin's sake I really want this drama to be a big success so we can keep seeing her in dramas and eventually she can do one with son seungwon where she can get married to him, have his kids, continue bickering, become old with him and definately NOT die in 8 years....

Is the potential lead here too young to be a judge? Well they look so young to me. Im expecting actors in 30s to lead this.
Its good Dongha is up for a second lead again and turning down being lead in I am a Robot.

Are you talking about Park Eun Bin or Yeon Woo Jin? If it's the latter, there's nothing to worry about because he's in his 30's (born in 84).

The description of Haeryung's character reminds me of a real-life (ex?) K-pop idol who actually (semi?) retired from the entertainment field and actually did go onto studying and attaining a law degree, but I can't remember who it is.... Oh gosh, not remembering is going to drive me insane XD The name of the person is going to come to me in the middle of the night and I'm going to wake up and be like, "OOOOOOH, THAT'S WHO IT IS!!!!!!" XD

That sounds really cool! Let us know if you remember who.

I think that's Yoona from Shinvi, a group that was part if a subsidiary of SM entertainment.

Dongha, please be a good person so I don't have to be morally conflicted like when you were a psychopath.

They better hurry up. It just one month to the airdate. SBS rush again, their rush dramas always good as first then draggy in the middle (SP, RW)

The female and male lead description sound like Jiwon and Sungmin in Age of Youth a lot. At this time if only Son Seungwon was the male lead too...

Oh please, I can't wait to see you Dongha, please accept the role.

I got to say, I have a lot of respect for Dongha. The fact that he gave up a leading role on another show for a supporting role, shows a lot of respect and confidence he has. I always hate when a show casts an idol or a newbie, who cannot act, for the lead over actors who are so much better and deserving of the chance or when the supporting characters are so much better. They get cast in a lead without going through the process of side and supporting roles to grow as an actor. Not to say that Dongha isn’t capable, but that he is willing to grow more first shows a lot of class.

Really excited for this cast line-up! I have high hopes for the chemistry between the 2 male leads and park eun bin! :)