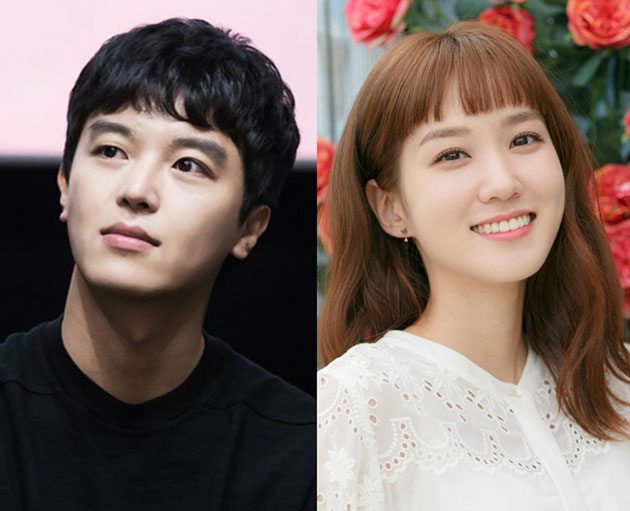 Oh my, this could be interesting—Yeon Woo-jin (Seven Day Queen) may be working with another Age of Youth alum (after first pairing with Park Hye-soo in Introverted Boss), having been offered the same drama that Park Eun-bin (Age of Youth 2) is currently considering. According to his agency, Jump Entertainment, Yeon Woo-jin was offered the leading male role in upcoming courtroom drama Nothing to Lose, and he’s currently reviewing the offer.

The main plot for Nothing to Lose is centered around the heroine, who is notorious for being thickheaded. When her brother is framed for a homicide and murdered himself by the corrupt and powerful, she challenges them directly like a bull in a china shop. So that’s clearly a ticking time bomb for disaster.

If he confirms, Yeon Woo-jin will play a judge from the Seoul District Court, who always dreamt of becoming a respected judge since he was young. He values his record as much as his life, and as such, he treats each case as if his life were on the line. With his wisdom and flexibility, he’s often called to be a mediator between plaintiffs and defendants. When he’s assigned to the same division as the heroine, a strange new relationship begins—not quite rivals, but not quite friends either.

Wednesday-Thursday drama Nothing to Lose will begin on SBS in November, after the end of While You Were Sleeping.

Is it bad if my first tought is "Yeah, good kisses forthcoming ! " ?

LMAO! Hardly, I'm sure half of us had the same thought :P

Yep, after my disappointment with no kisses of her and Sung-min, I had the same thought!!

LOL me too. i will be waiting for this drama XD

Have you seen his kisses with Lee Jae Hoon in Just friends? XDD

I have! It was freaking awesome in epic proportions! Hihi 🔥😳😍

At this point I feel like the mother in suspicious partner "These days cats and dogs can become prosecutors".
Please. Just please. I'd rather watch a drama about people in prison (*looking at you Wise Prison Life*) than yet another prosecutor/judge drama.
Maybe they can make a drama about a fish seller, or some people in a village and their everyday stuff.
Sorry to the actors, but I am barely going through wyws right now 😢😢😢

I'm here for this pairing. Or really either of them in anything. But really hope this one works out for both of them.

I will watch anything with Park Eun-bin in it.

I am sick of all this law-related drama but gosh this pairing is something I didn't know I need.
Please say yes!
And please be good they both deserve a good drama T_T

Yes please. I love both them.

Okay, not gonna lie, I've dreamed of this pairing. Partially because I had wondered whether she could have done a bit better with the lead role in Introverted Boss, but also because I thought she could have been awesome in something like Seven Day Queen too, though I'd never change the cast for that.

So I definitely want this pairing to happen, even if I'm pretty ready to be done with legal dramas. I just also want it to turn out good! Wish I knew about the writer/director.

im male, but seriously i love Yeon Woo Jin, he's one of my favorites korean actors.
The guy is seriously so underrated.
About the drama, sounds interesting and the pair looks pretty good, they're really good actors.

Am I the only one who don't like the pairing? I love both the actors individually, but together... maybe Ii should give them a chance..

I def agree, he's one of my faves too! I've seen him do wacky, romantic, melo, angsty, broody, villain-y, all to great effect... sigh ♥ So so talented. I'm happy that he's getting a lot of lead offers too

Isn't anybody going to complain that these are both actors' third lead roles this year like that robot drama? 😂

I'm gonna be so pissed off if there is not enough romance. Age of youth 2 left me sooo bitter...

Here for it. Want it. Need it.

This is like witche's court judge version not that in complaining

I like the pairing, not so much the premise. I have not seen both AoY but I like Park Eunbin's aura. Yeon Woojin is very likable too. I will watch out for this.

wwwoooow i did not see this partnering at all. but when i saw the title of the article- the feelings are positive. and dont their faces match each other. It also meansd we can look forward to solid acting!

As long as no Kiss scene thenI will watch it... cause YWJ is too handsome for her...lol... sorry.... still cant move on with 7dq..... rewatching 7dq coz pmy-ywj pairing still the best!

Park Eun Bin is literally gorgeous...people tend to forget because she's largely become famous off of her quirky, amazing Song Ji Won, but look back to Operation Proposal. Girl is beautiful as hell.

are you blind???? Park Eun Bin is georgeous

Well Park Eun Bin is too pretty for him too. Haha... I can't move on with AOY2 that I still want Park Eun Bin and Song Seung Won

Guys thts just someone's preference.Don't have to be so offensive.It's just that 7DQ's memory is still fresh and people still imagine him with PMY,tht's it.And bdw,why unregistered users shouldn't be commenting.R u paying for commentating as a registered users?

Yeon Woo-jin's previous two dramas didn't work on me so I pin my hope on this one and also Park Eun-bin is my girl crush... Is it too much if I ask Son Seung-won for second lead male? LOL

DON'T. YOU. DARE! Would you take responsibility if I die of second lead syndrome? Poor Seung won. If he doesn't get the girl for the THIRD time, I should just die.

If he doesn't get the girl for the THIRD time, he can have me.. LMAO

I really like both actors, but with this premise I wish they would use older actors/actresses. I know PEB can play older roles but there are plenty of talented older actresses that would probably be a better fit. Kim Sun Ah, Lee Yu ri, Lee Bo young, Gong Hyo jin...Kim Hye soo would be awesome.....*Looks up PD and writer's credits, sees Entertainer*...Umm guess not.
I had this same problem with Suspicious Partner (and a lot of dramas involving lawyers and doctors). My brain just would not accept Nam Jihyun as a lawyer. Why not just use age appropriate actresses/actors?

LOL my brain couldn't accept Park Bo Gum as a lawyer in I Remember You...thought I was the only one with that problem!

I didn't watch Suspicious Partners but female lead does look really young and I know she is young...honestly am not too thrilled about the prosecutor storyline but I love Yeon Woo Jin and will pretty much anything he's in.

I think depends on where you are
from, but in some countries age like 25 y/o can already be a l lawyer/prosecutor. I became a lawyer at the age of 24 but yes in general people said it's weird to see someone young as a lawyer. There was long discussion on this regard on the previous thread. Either Park Eun-bin or Nam Ji-hyun aren't too young to act as lawyer and judge, because it is age appropriate in Korea.

I can totally see this pairing! They can do both heavy and wacky scenes. I hope the writing and directing make good use of this cast. *sideeyeingmaddog*

No quite rivals, not quite friends? is it *GASPS* lovers?!
Soooo here for this paring!

I like Yeon Woo-jin, so hope this is good.

Its about time Park Eun Bin got a spotlight. She is amazing on AOY

This is Park Eun-bin's third drama for this year too, so no "oppa love" rule applies here.

CSB did different roles for this year too, or at least different genre (except SD and Robot) imo - Rebel was a sageuk and she was one of main leads (4 main leads here) then her drama special as high school student was a melodrama, Strongest Deliveryman was a romcom and similar toa Robot (I don't what know her actual role) .q.But agree YWJ and PEB had clear different kind of roles they acted this year and they managed to not leaving any trace of their past role in their next role.

Maybe because CSB was offered Robot when she was still doing SD, and I think some viewers lost interest with her in SD, so the reactions weren't so great.

+ YWJ is here! Couldn't have been happier.
- Courtroom? Again in this year?

I hope this drama will turn out as good one. The height difference between them will be cute (and it reminds me of Park Eun-bin & Lee Tae-hwan in Father I'll Take Of You). Hope there is a courtroom kiss in this drama. 🙈 Both of them are working really hard this year, and no long break.

Lol nowadays I see Chae Soobin's name in all the casting news. People either hate or love her it seems.

Nothing against her but tbh, K-drama's choices this year was boring. I keep seeing repeated castings like Yoon Kyun-sang, Yeon Woo-jin, Park Eun-bin, Shin Se-kyung Chae Soo-bin, Yeo Jin-goo etc taking on 2-3 dramas per year. It makes me wonder if the PDs have just given up or these are really the "it actors" of the year.

I think because the scripts are not so interesting this year so popular actors pass on those, they can be on vacation still makes tons of money. Those opportunities get pass to lesser known actors that mostly never had lead roles before, so they accept all as they wouldnt know when opportunity like that can happen again.

Yes just like what C said, the scripts are less interesting this year. Compared to 2016 which had several blockbusters and works by well-known writers, the dramas this year are a little less profile. 2018 will surely be different. I mean, there's already Mr. Sunshine and Kingdom. Not to mention the big names like Lee Young-ae, Jang Dong-gun are making a comeback as well.

O yes, I'm waiting for Jang Dong Gun comeback too.
Hopefully the Suits remake will be good. I do hope YWJ will continue to shine in this drama but yes, too many legal drama already incoming ( not sure my plate have more space for it).

I just realized, I've been watching a lot of dramas in court lately. And now this. Is this the age of prosecutors & judges & lawyers? Oh well, Yeon Woo Jin. Does anybody else love his voice? It's melody to my ears.