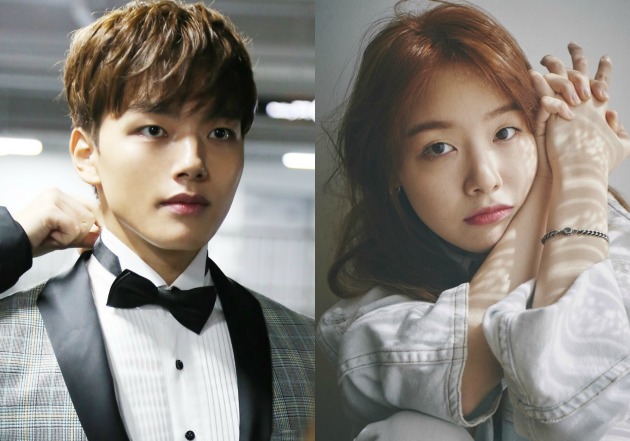 Casting has been a bit chaotic for the remake drama Absolute Boyfriend, which has tossed around a number of different names before finally settling down and confirming that the new series will be headlined by Yeo Jin-gu (Reunited Worlds) and Girl’s Day’s Minah (Beautiful Gong Shim), with Hong Jong-hyun (The King Loves) in a supporting role. (At one point Chun Jung-myung and Song Ji-hyo were in contention, but they’re no longer in the mix.)

That means dramaland’s robot trend will be continuing for the foreseeable future, as Yeo Jin-gu joins Seo Kang-joon (Are You Human Too) and Chae Soo-bin (I’m Not a Robot) in playing a TV android. This project actually pre-dates the others by a while; I’ve heard rumblings of a Korean version of Absolute Boyfriend for years, although it’s never made it out of development hell (remember when the title was courting Kim Haneul and T.O.P?). The original property was a manga with the same (translated) name, also known as Zettai Kareshi, which was made into the Japanese drama series in 2008 starring Hayami Mokomichi and Aibu Saki. In 2012, a Taiwanese version was also made, called Absolute Darling and starring Jiro Wang and dramaland’s own Gu Hye-sun.

Yeo Jin-gu has confirmed taking on the lead role of “Yeong-gu” aka “Zero Nine,” a robot with a warm heart (what?) who falls into a “sweet and electric romance” with a human woman whose heart has become frozen because of painful past experience with love. Of course they would be opposites, and of course the dynamic is set up in the way that defies nature. K-dramas, I love you, never change.

Hong Jong-hyun will play the role originally offered to Chun Jung-myung, a top star named Ma Wang-joon who harbors a pain of his own. The only person to really understand it is the sisterly stylist played by Ha Jae-sook (On the Way to the Airport, Birth of a Beauty), who cleans up Wang-joon’s messes, humors him, and soothes his temper when necessary.

Absolute Boyfriend will be directed by PD Jung Jung-hwa of Flower Boy Next Door and written by Yang Hyuk-moon of Mirror of the Witch. Those credentials are solid, and I’m generally onboard with the casting, although the one that has me most curious (and an itty bit concerned) is Minah, who is adorable when she’s playing warm-hearted, bubbly, very human characters. We’ll see how she’ll do playing cold and professional.

The drama was once looking at a run on OCN, but that has since fallen through. It will be entirely pre-produced and aims to begin filming in July.

I know Ji Ah was real, but robot boyfriends should be a thing. That and webtoon boyfriends a la Kang Chul.

The article about Kang Haneul and TOP was from 2011! So this has been in development hell for 7 years? Not sure if that's a good sign.

I guess that now YJG has been a clone, he's moving on to android. I hope for his sake this goes well.

Solid young cast. Feels like a waste to not have Minah play bubbly though. Was also hoping Yeo Jin Gu's next role would be meatier after Reunited Worlds, where he vastly out-acted the older cast. I should go back and finish Circle...

Finishing Circle is a must!

Yeo Jin-gu as a warm-hearted robot is enticement enough for me.

Remember that summer when Moonlight Drawn by Clouds and Moon Lovers aired on the SAME day, in the SAME timeslot

That's right! Back then, Mondays were Moondays for us. 🌜

That... that was a crazy time.

*big sigh* Absolute Boyfriend was one of my first manga's and it's a bit disappointing to know that they won't be sticking to the original story line.

I never read the manga, but I wish this Korean version would've kept Soshi. Why do we need an emotionally-damaged top star when we can have a sweet, caring childhood friend?

I'm one of those quite relieved they won't be sticking to the manga's original plotline. I found it childish and the female lead got on my nerves a lot. But it was a highschool setup so I guess she should be given more slack.

I'm not familiar with the manga but I've seen the Japanese original live version. Apart from 'highschool', this was my impression as well. Juvenile and a female lead that made me want to poke my eyes out. Basically a sitcom without the laugh track.

This is a cast I can get down with. The key is Yeo Jin-gu. He's so fabulous there's no way anyone will be getting Second Lead Syndrome for this one.

I just realised that Yeo Jin-gu is about to do yet another drama as a male lead where he doesn't get to kiss the girl.

And yes I realise he's technically kissed the girl but he probably kisses his grandmother the same way.

Actually, Im Siwan has that “first male lead syndrome” title in The King Loves, ironically also against Hong Jong-Hyun, whose second lead, Rin, ended up with the girl. The shipping wars in that show...SOOMPI had to shut down a thread because it was so nasty. And unrelated but related, @outofthisworld, I hope this is on your radar.

In that case then Hong Jong-hyun has invented the always the second lead who gets the girl syndrome.

Are you talking about my baby?

I read "Hong Jong-hyun (The King Loves) in a supporting role" and spaced out. After reading VB's comment, I perked up again.

@outofthisworld, yes, it’s your baby, about to get the girl yet again! But I’m totally fine with this development as well!

I have such a soft spot for Reunited Worlds, even though my warm feelings have little to do with the plot, pacing or romance.

Oh! I know you’re fond of it from.. somehow, and I’d love to hear a positive perspective on it! Could you tell me where I could find your thoughts on it, if you’ve posted about it?

Thank you most kindly!

"my warm feelings have little to do with the plot, pacing or romance."lol, then where do your fond feeling come from, the cast?

I own the manga and have read it multiple times, just from the synopsis I can already tell it'll quite different but I just hope they don't change the ending. I only watched the ending from the Taiwanese version and, even though it was "accurate", it was cheesy as hell and kinda desperate for tears. I hope they keep it as simple as they can so as to follow the manga's purpose. But my hope will probably go to the trash. I will still give it a shot of course and I'm always hoping for the best.

I'm also excited about Ha Jaesook haha she was absolutely lovely in Birth of a Beauty.
Happy that this finally begins filming. Can't wait to see my girl Minah and Yeo Jingoo partnering up!

Unpopular opinion but I didn't like the manga. I spent most of the time rolling my eyes at the female lead. I hope and pray that the characters would be given more depth this time. I'm a bit anxious about this, especially as it doesn't seem like there's even a tv station for this drama already. But if I could spend days watching Yeo Jin Goo be passionate about watermelons, of course I'm on-board with this drama.

This was my impression of the Japanese live version too. I"m hoping the Korean version has a better female lead and spends a bit more time on universe-building rather than "wacky" robot antics.

But Yeo Jin-gu is love so I'll be watching anyway.

Yes, the female lead was rather too desperate for male attention and kept both of the guys hanging 80% of the time. I hope the female lead would be better written this time. And I agree about the universe-building as well. I mean it's a romcom so I probably shouldn't expect too much but still... T_T

I've realized my love for Jin-gu does not extend to watching poor dramas. I have dropped way more of his than I would like, so I need this to be good please.

I think the key with cold characters is that they're still able to show some vulnerability even under the coldness. I think that's one of Minah's strongest skills as an actress, so I'm optimistic.

Also, Jin gu and Minah both have such deep voices!

It seems like the story will be different from the original, hopefully for the better, as some of the tropes and plot could come across dated now (shoujo manga from the early 2000s isn't the most progressive and often childish, granted it was set in high school unlike the dramas). Could be nice to still an updated, refreshed version of the same story.

Having now seen the original Japanese version, I really hope they do more with the premise than The Wacky Adventures of an Ingenue and Her Robot Roommates .

However, I once held out hope that the Korean version of Mischievous Kiss wouldn't be as heinously offensive as its Japanese counterpart and was sorely disappointed. Still, I'll tune in for Yeo Jin-gu always.

OMG a Vampire Idol reunion!!! Will Hong Jong Hyun and Minah finally get together here? Does he come back as a cranky vampire star, and find that her heart has frozen after waiting for Yariru all these years?
*waving the SLS flag already*

Omg YES AHAHAHA. I’m still waiting for their happily ever after. Now is their chance!

Looking forward to the many bread and IQ jabs ;)

I was in at Yeo Jin-gu being a robot, but it's not only him but also Gong Shim and ALSO Rin? Give me this drama, and fast!!! 😍😍😍

I’ll at least watch this for YJG and HJH. HJH seems to be picking projects where the second lead actually ends up being part of the OTP (if this one follows its source material). I may start type-casting him into this role. I’ve never seen Min-Ah in an anything, so I just hope she can hold her own opposite the gargantuan talent of YJG. Actually, I hope everyone can hold their own against him. One of the reasons Circle so good was that the entire cast was amazingly convincing, even the green ones. Which reminds me, I have a theme of the month to write!

I like Min-Ah and I think a world of Yeo Jin Gu but of course, the one I love is Hong Jong Hyun.

Is that his modus operandi? After getting my heart torn apart and put back together by Rin, I am all for it if that is the case!

SIGHS. I wanted Hong Jonghyun to pick up a lead role after The King Loves. SIGHS. I'm not a fan of the original manga or Minah too. SIGHS.

I also think it's time Hong Jonghyun got a lead role. :(

Yeo Jin Gu is a great actor, but I have a hard time seeing him as the perfect robot. I was thinking of someone like Jang Ki Yong who has a model build. I guess I still have Hayami Mokomichi in my head as Night :S

robot boyfriends if only this was a real thing!!! Program them to take out the trash and snuggle when watching scary movies lol

But Zettai Kareshi is not even that good even with my live action standard (lower than other genre lol) so I dont understand why they need to remake it?
And I think my baby boo YJG is still toddling in picking up good scripts/projects.... oh baby boo...

Not too keen on watching a remake of Zettai Kareshi but will check it out for Yeo Jin-gu and Minah.