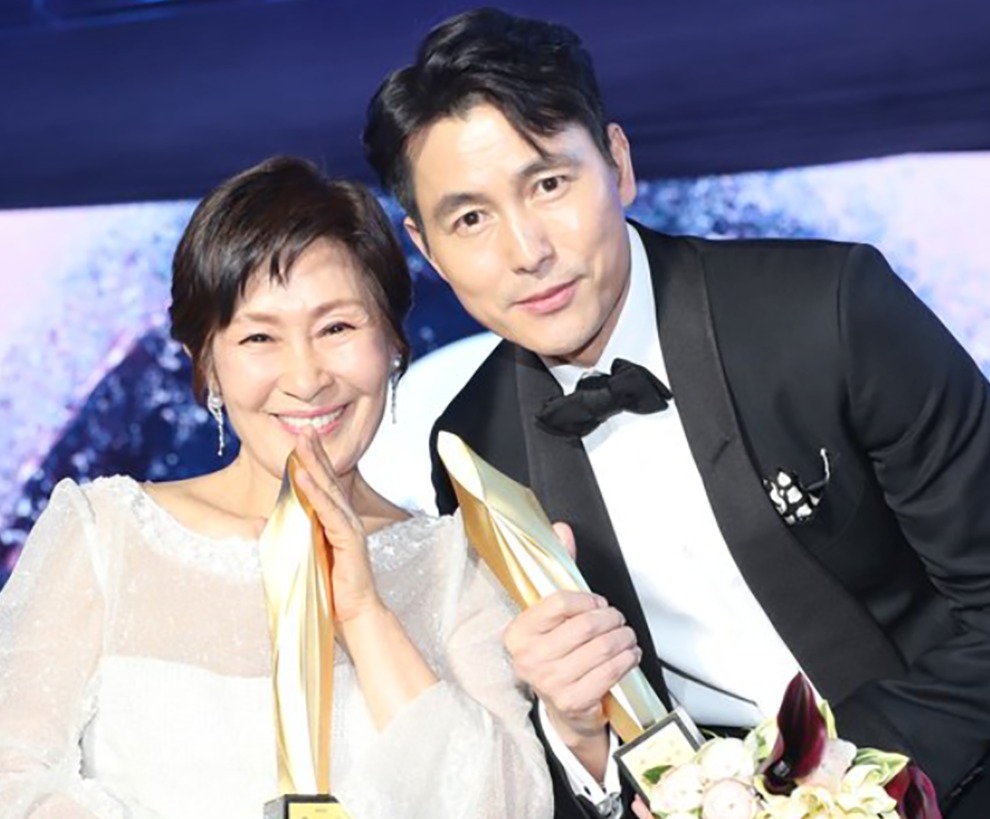 The 55th annual Baeksang Arts Awards were held on May 1, 2019 and stars from cinema and television were in attendance to receive their awards and fete their colleagues. Unlike the year-end shows, the Baeksang Awards aren’t organized by broadcaster so the nominees and winners tend to be more interesting and less predictable. Last year’s emcee trio, Shin Dong-yup, Suzy, and Park Bo-gum returned to host again (though this is actually Suzy’s fourth consecutive year hosting).

Kim Hye-ja and Jung Woo-sung were the big winners of the night as they were awarded the Daesang. Kim Hye-ja was received the Daesang in television for her role in The Light in Your Eyes and Jung Woo-sung won the Daesang in film for his role in Innocent Witness. SKY Castle picked up the most awards in the TV section, with four awards in total for directing and acting. My Ajusshi prevailed in a strong field to win best drama (the other nominees: Mr. Sunshine, The Light in Your Eyes, SKY Castle, and Red Moon, Blue Sun) 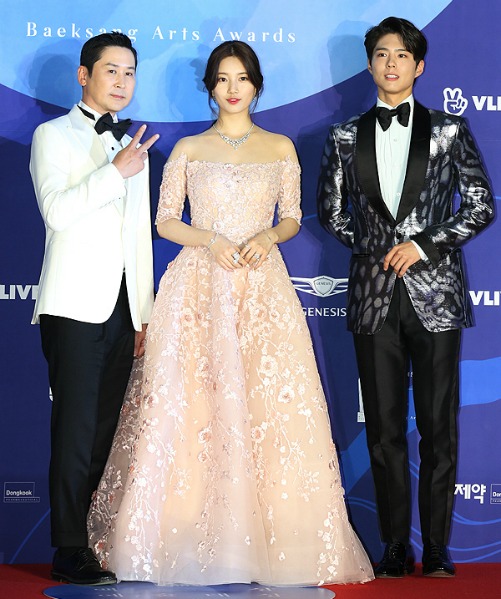 The dramatic film Miss Baek scooped the most awards in the film section with three wins, but the North Korean spy thriller The Spy Gone North followed closely behind with two awards. Han Ji-min won the top acting award for her role as the lead in Miss Baek and castmate Kwon So-hyun picked up the best supporting actress award. The film’s director, Lee Ji-won, was honored with the best new director award for Miss Baek. The Spy Gone North won best film and Lee Sung-min was awarded the top acting award for his role in the movie.

Fashion-wise, I normally find Korean awards shows uninspiring, but I actually enjoyed the Baeksangs more than last year’s year-end awards shows. The color palette was still largely monochrome but there was a tiny step away from the bridal looks we usually get. The men’s fashions were by and large the same old black suits and tuxedos. Some actors went the experimental route with their blazers, opting for textures and colors that departed from the norm. While I admire the effort, I think it worked better for some people (Kim Young-kwang) more than others (Choi Jin-hyuk).

On to the winners! 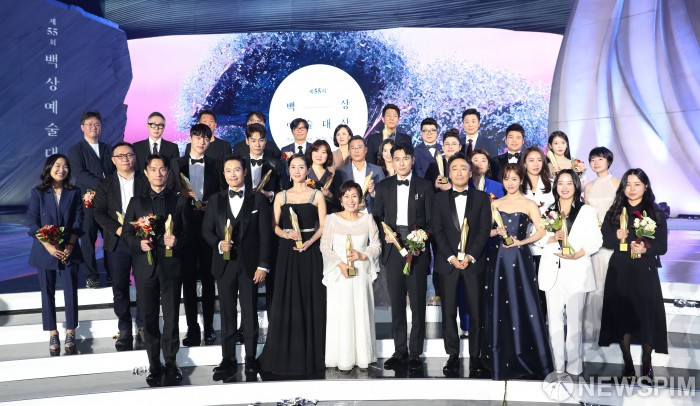 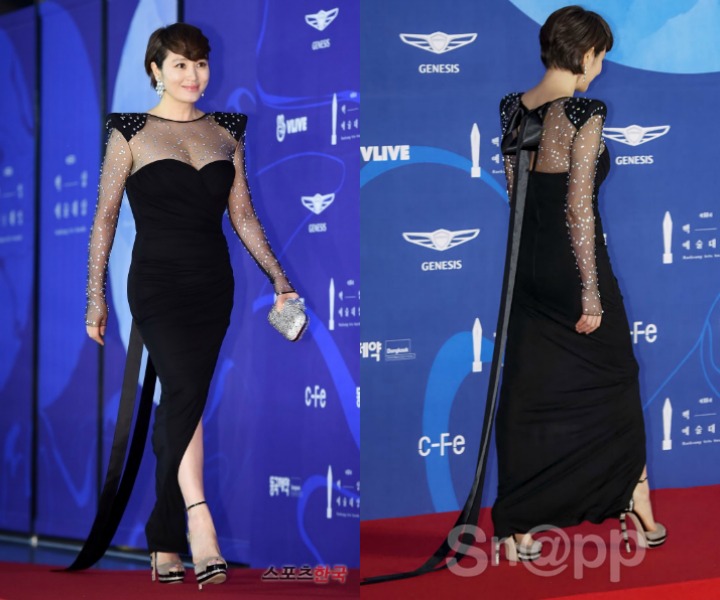 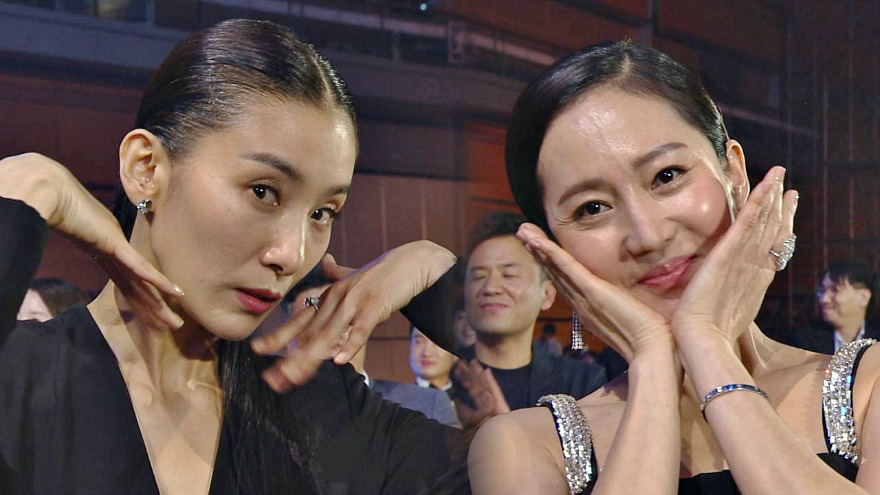 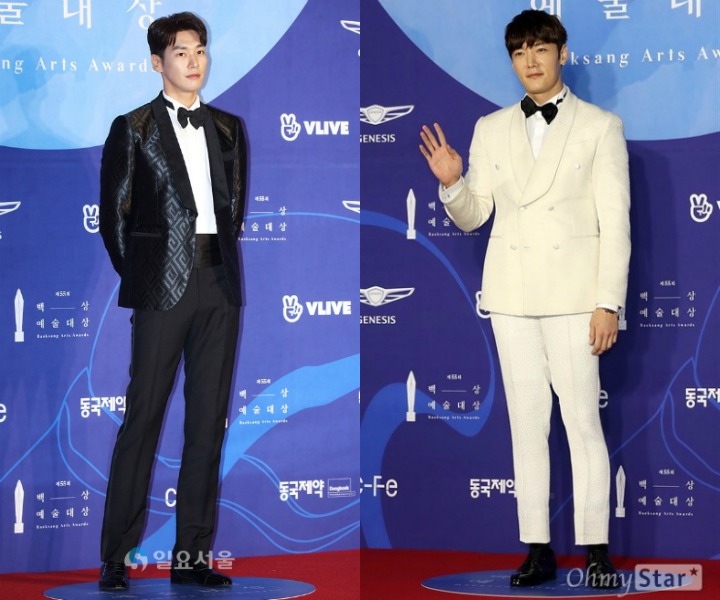 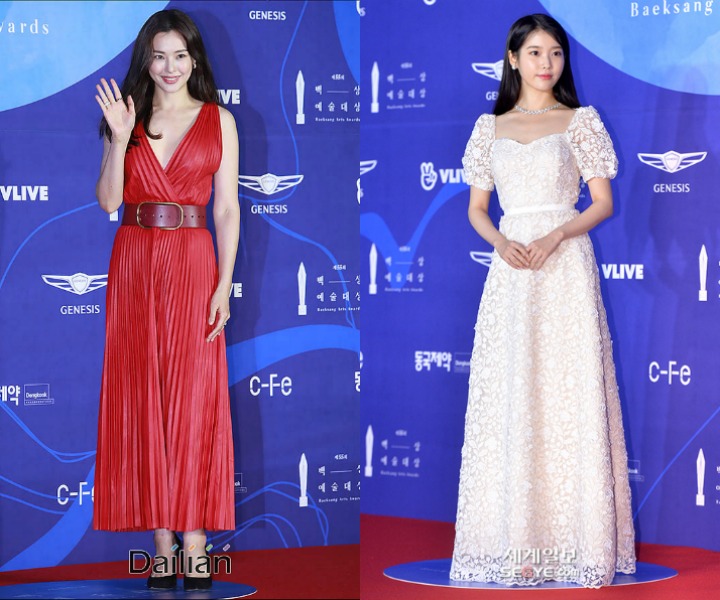 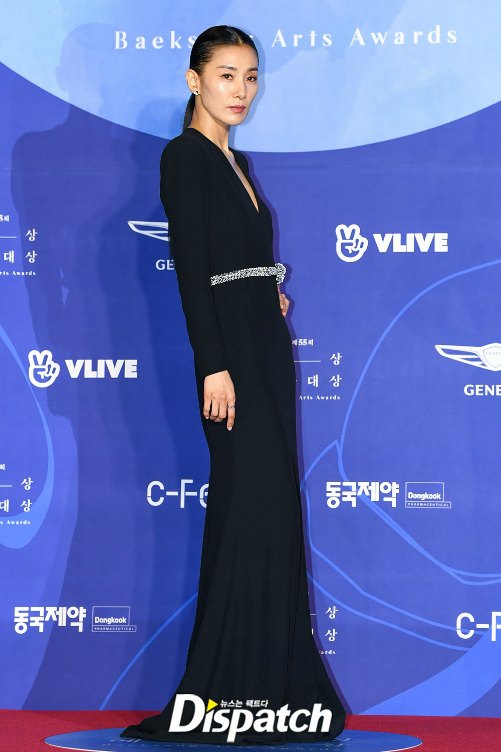 Congrats to the winners, but especially to Kim Hye-ja. It was well deserved - she did a fantastic job in Light in Your Eyes. I am most happy for her.

Han Cinema included part of her acceptance speech, which was actually the ending soliloquy from Light In Your Eyes (aka Radiant/Dazzling):

"My life was sometimes happy and sometimes not. Although life is merely a dream, I was happy to be able to live it. The cold air in the morning, the breeze that comes before the flowers bloom, the smell of dusk... There wasn't a single day that wasn't dazzling. Life may be tough, but everyone alive has the right to enjoy everything that life has to give. Even if today is just ordinary, and the next one is just ordinary too, life is worth living. Don't waste the present with regrets of the past and worries of the future. Live today, dazzlingly. You deserve it. To all of those who were a mom, a sister, a daughter, and yourself".

I love her :) I think she really deserved the Daesang.

I got teary eyed over Kim Hye-ja's speech. Much respect to this legend! Here is to more Daesangs in the future!

Can we have a drama with Kim Hye-soo? It has been too long.

Signal 2 with the same cast, please?

- The one thing Team UAENA does well all the time is hiding the fact that Ji Eun’s hair is actually extensions 😉😉😏😏😏 But need to work harder in stop choosing the same flower appliqué for her to wear to every event
- My favourite look of the night goes to Lee Jung Eun sunbaenim’s blue pantsuit 😍😍😍
Honourable mentions: Oh Na Ra (THIS is a flower appliqué dress done right), Han Ji Min

Hmm... this is the most uninterested report on a major award show ever to appear on Dramabeans. How I've missed Javabeans and girlfriday.

You aren't the only one! I find the comments section more amusing and wittier than the articles.

Dear Lord... an award show where all the winners deserve it! 😱

There's a lot of strong competition too! My indecisive self can't imagine sitting on that awards panel and having to pick just one winner for each category.

When your movie line-up includes Swing Kids and Miss Baek, you know it's been a good year! 😆

IKR? It's been a while

I can't comment on the TV awards, but I'm surprised at how well-chosen most of the winners on the movie side are. I'm glad they remembered Lee Sung-min in The Spy Gone North, whose performance was brilliant but not exactly flashy awards material. And I'm glad Kang Hyung-chul got Best Director for Swing Kids after the disappointment at the box office, because that movie really was put together with extraordinary skill and flair.

I would have given Lee Sung-min the daesang award to be honest.
He was in a much tougher competition in the Blue Dragon award last year against Kim Yoon-seok.

He totally deserved the Daesang, but I'm just glad he got Best Actor cos I was so convinced that he didn't have a chance against the more glamorous and/or obvious likes of Yoo Ah-in and Joo Ji-hoon. (Actually I rather dislike JJH, but he really was very good in Dark Figure of Crime.)

Jung Woo-sung was good in Innocent Witness, but I didn't expect him to win anything either. So I'm pretty flummoxed by his Daesang.

Swing Kids floored me - I loved every second!

Less eye-rolling than the previous.

So happy MY AHJUSSI is still winning, almost a year after it was televised. So so deserving! ♥♥♥

Kim Hye Ja's acceptance speech which was also the ending narration in Dazzling was award worthy in itself. Such beautiful words written by writernim, and conveyed via Kim Hye Ja's soothing voice. Gold!

Congrats SKY Castle team!!! That is such a great picture of Kim Sep Hyung and Yeom Jung Ah!! Proud that you were able to bag 4 awards. It was a tough competition. Kim Hye Yoon, my girl ❤️ So deserving. Hope that’s just one of the many acting awards you’ll receive!

Congrats to My Ahjusshi! If I think about it, My Ahjusshi did give me a more satisfying end, great closure thank SKY Castle. But it was SKY Castle that brought out all those heavy intensifying emotions for me!!!

Lastly congrats Jang Ki Yong! you were amazing in Come and Hug Me. I hope to see you in another drama soon. Sucks I had to drop Kill it halfway through ep 1, but I just couldn’t get into it 💔

How can I get the video of this award show