In this time travel drama, a detective who does not show emotions becomes aware of the existence of time travel. When he meets a genius physicist who has traveled from the future into the past, the two find their lives are more deeply entangled than they first realized.

In this time travel drama, a detective who does not show emotions becomes aware of the existence of time travel. When he meets a genius physicist who has traveled from the future into the past, the two find their lives are more deeply entangled than they first realized. 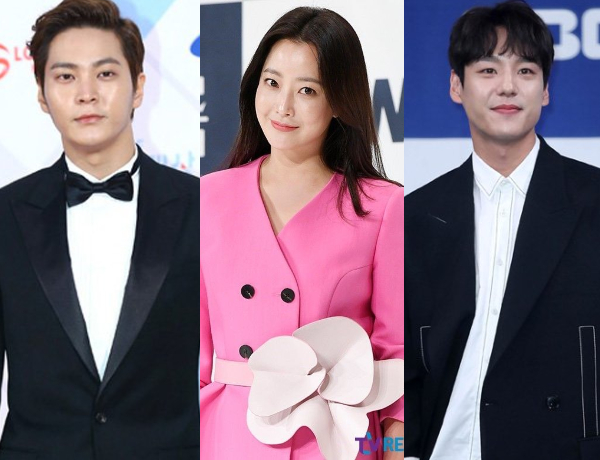 It looks like Kim Hee-sun (Room No. 9) and Joo-won (My Sassy Girl) are the top contenders to be the leads in upcoming SBS drama Alice, with reports saying they’re close to confirming. More recently, it’s been announced that Kwak Shi-yang (Welcome 2 Life) has also received an offer to join them.

Sci-fi romance drama Alice is about a woman and a man who make their final goodbye at death, but miraculously meet again, stepping over the boundaries of time and space. If Joo-won confirms, this will be his first drama after returning home from military service.

Kim Hee-sun is set to play a genius physicist who holds the key to the secrets of time travel. Due to the time shift aspect of this drama, Kim Hee-sun must play a 20-year-old, a 30-year-old, and a 40-year-old version of herself, which should be no problem since she’s virtually ageless.

She meets a police investigator, to be played by Joo-won, who insists that their reunion is fated. Together, they begin to pursue a case that helps her uncover the secrets of time as well as some secrets about herself. The role that Kwak Shi-yang has been offered is that of a time traveler who is the manager of Hotel Alice.

SBS’s Alice, directed by Baek Soo-chan (Girl Who Sees Smells), is set to air in the first half of next year.

I love love this trend of "older" women getting interesting roles, along with the male leads to match them.

women will always be girls.
Kim Hee Sun is not just gogeous by her looks but she has a very bright expression total opposite of my RBF

Thank you for the casting news for Joo Won, @tineybeanie. I've been keeping an eye open for him since he mustered out of military service. Here's hoping this drama is a better one than MY SASSY [JOSEON] GIRL. Hmmm. Maybe he'll end up in Goryeo with a plastic surgeon and join forces with Choi Young and the Woodalchi. As for the geeeenius physicist, we all know that she's really Hwata. Kwak Shi-yang did a nice job as the conflicted orabeoni of Yeon-hee in MIRROR OF THE WITCH.

Ha, exactly! This comment is giving me all the FAITH feels. Time for a rewatch? I think so

@Flighty Gazelles,
I'm currently watching MY COUNTRY, and for me it's wall-to-wall flashbacks to FAITH. Luckily we don't see Choi Young or King Gongmin on screen. It would have killed me. Yang Se-jong and Woo Do-hwan remind me of Lee Min-ho as they're about his age at the time he starred in it. Oh -- Ki Chul cameos as the father of one of the leads. No sign of Sung Hoon and his killer flute. ;-)

I haven't had the time to watch new dramas but when I do, I'll check out My Country...maybe lol.

I've been anticipating Joo Won's return the most, and he's been out for months now. I hope the fact that he's taken his time selecting a project is a good sign. I love time travel but it's so hard to do well.

What a cast! I've watched even the bad time travels, so I could definitely watch for these talents.

Been waiting sooooo long for JooWon's return. So glad he's back!
I feel like since Youngpal, the man hasn't been choosing the best scripts. Hope this is a good one! *fingers crossed*

Oh wow, the woman is the geeeeeeenius this time around?! HALLELUJAH!!!

This sounds potentially awesome but also potentially disastrous. I’ll be checking it out.

Joo won!!!!! Come back to dramaland~~~~ he really is taking his sweet time to prepare for a comeback.

The description doesn't intrigue me though. I'm not a fan of sci-fi. Huhuhu

Wishing the cast and crew all the best for this project. Fighting.

Woah, a woman physicist? I remember somewhere beanies had a discussion of professions and some beanies said they wanted to watch a show with physicists! wow! dream come true!

I feel like this show could be absolutely everything I love so refuse to muster any enthusiasm or expectation.

LOL, great strategy. Temper your expectations, that way, you can't be let down.

I am happy to see Joo Won in consideration for a role but I would love to see Si Yang as a lead.

This drama has potential to be on my watch list. I like all 3 actors and I'm a big fan of time traveling stories.

Scifi dramas always get me. Now in my radar

Pls choose a good project this time! I have to admit that My Sassy Joseon Girl was... hmmm quite a mess for me (haven’t been able to begin watching Ep 2 till now.)

I’m not a fan of sci-fi shows, but upon hearing the premise of this show I thought how wonderful it would be for Joo Won to play the role of a police officer again (as he did in Ojakgyo Brothers), and something sci-fi also reminds me a bit of Yong Pal, the show I really like.

Pls be good this time show.

And how come I just finished Oh My Ghost which starred Park Si-Yang as a lovely, heart-warning chef. He was so cute in that show, and I’m a bit surprised to see him again (so soon indeed) in this project.