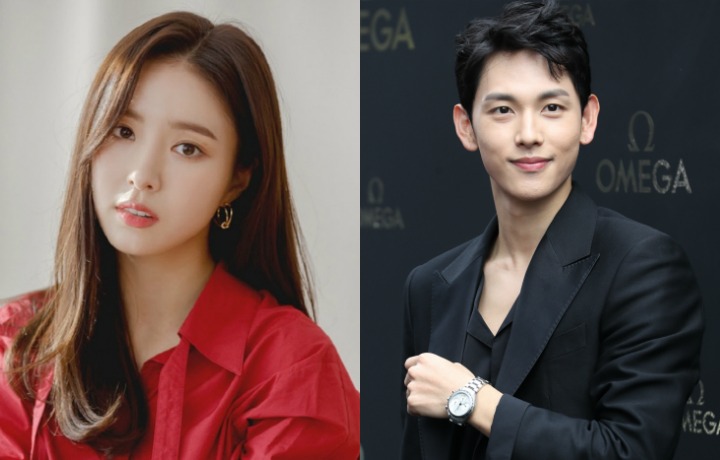 The drama’s central conceit is that in the modern era, everyone is busy living their own lives and it’s difficult to truly understand each other even when you are speaking the same language. We’ll get to follow along as the characters build relationships despite the difficulties in communicating with each other.

Shin Se-kyung will be playing an adventurous translator who is true to her feelings. She’s also a realist who knows what she likes and what she doesn’t like. Shin’s character first became interested in languages because she had fond memories of subtitles helping her to understand an evocative foreign film. When she realized that some subtitles were written incorrectly, she decided to do the job herself by becoming a translator.

Im Shi-wan (Hell is Other People) plays Shin Se-kyung’s potential love interest. He’s a failed athlete that once competed in short distance events at a national level and even used to sell out arenas (even though track and field is a relatively unpopular sport). But due to an unfortunate event, his life completely changes and he decides to retire for good. He then meets Shin Se-kyung’s character, and he realizes there’s more to the world than just track and field.

In the supporting cast, SNSD’s Sooyoung (Tell Me What You Saw) plays the CEO of a sports agency. She’s from a wealthy chaebol family, but she’s been overlooked as the chaebol group’s heir just because she’s not a man. Kang Tae-oh (Tale of Nokdu) plays a carefree art student who has a bright and refreshing personality. When he first meets Sooyoung’s character, she demands that he draw her a sketch. Despite her bad temper, he becomes intrigued by her and how she seems like Rapunzel trapped in a tower of her own making.

Regarding Shin Se-kyung’s casting news, a show staffer said, “Shin Se-kyung was perfect to express a well-rounded young woman and we look forward to seeing her act in a romance.” Recently, Shin Se-kyung won the Top Excellence Award during the MBC Drama Awards for her work in Rookie Historian Gu Hae-ryung. She also currently stars in a Youtube show called Jinsa Noona, where she vlogs about her daily life.

Run On, directed by PD Lee Jae-hoon (Chief Kim) and rookie screenwriter Park Shi-hyun, will begin filming by the end of the summer and begin airing on JTBC during the latter part of this year.

I think Shin Se-kyung shines more in sageuks than in modern dramas but I like her, so I will see if the teasers look good.

I enjoy her work, too but I find her a bit unsettling because fairly or unfairly, I assume she has had a ton of work done on her face as it always looks like it's been planed and smoothed down to a unnatural porcelain finish.

I don't think she got PS, but we never know. But between her and Soo Young, I prefer her beauty and her acting.

she has never had plastic surgery my dear a lot of female actress/idols name her as one of the beautiful faces ...she is always praised and admired for that

She looks the same from her childhood photos

wow she totally does

Whoa, I have been grossly unfair! The poor soul has clearly never been exposed to UV rays and has never eaten refined sugar or trans fats in her life. I hope the women in my life never read this thread -- cleaning up after enraged tempests is never fun.

For me, the best news about this production is another appearance by Sooyoung. My Spring Days is one of my all-time favorites, albeit a heart-wrenching one. I have wondered why she is not a bigger star: she is just lovely, multi-talented, smart as a whip and although as an actress she does not give someone like Han Ji Min anything to worry about, she is more than competent.

I suspect the character discription of Shin Se-Kyung's role (the part about wanting to do subtitles better) resonates with more than a few of the writers here!

I've only watched her in Tell me what you saw and she was remarkable.

Resonates with viewers too. Where is she when we need her?

And who needs her more? Netflix? Viki? "Unofficial" sites?

Lol. When I become the head honcho there a memo will go out to the KDrama Subtitling Division removing the F-bomb from the style manual.

I think those exact same words for about eight out of every ten new dramas I read about, but it has not stopped me from enjoying them all the same.

Oh, yes. Only I need to know more.

The story doesn't sound new at all but the cast sounds great, I love all of the leads!
And PD Lee Jae-hoon from Chief Kim/Good Manager?
I'll definitely watch!

"When she realized that some subtitles were written incorrectly, she decided to do the job herself by becoming a translator."

Omg omg omg omg! This article made me jump! I was just saying the other day that I miss Shin Se-kyung and was windering when she'd be back! Ahhhh I already like her character based on the description. I started out as a Super Junior fan who knows nothing about Korean and was so grateful to subtitlers. I told myself I will learn Korean and provide subtitles as well. I already feel for her!

I loveeeee Shi-wan too. Plus the supporting cast are people I like. So excited kyaaaaaaaaaaa

Although not a big fan of her works but I think Shin Se Kyung is a good choice for this role. Don't know about other languages but saw a video once where she was fluently conversing in English. I guess it won't be difficult for her to mould in the character .

Yes, she's good in English! Pretty sure she's self-taught too~

This cast is everything! And finally we’ll have second leads who are not meddlesome and have a romance of their own? Sign me up!

I’m so excited for this because if done well it has a chance to be as good as Fight for My Way, I love a good underdog drama

I have not seen her in a modern drama so this will be interesting. I loved that Sooyoung has been taking roles!

Im Shi-wan is one of those promising younger actors in Chungmuro. I'm glad he accepted "Boston 1947." I can't wait to watch it.

Writer Park used to work with Kim Eun-sook as an assistant writer in DotS.
What to expect? I dunno.

Where do you get these kind of info on writer? The majority of news coverage/ info are on actors. I really want to follow certain writers/directors work but there's hardly any material out there (in english anyway)

I think you can find such information on Han Cinema https://www.hancinema.net/

No specific sites really. I used to get it from MrX's site but he is no longer around 😢.
Google and make your own judgement based on the original source.

OK, I will be checking this one out.

Ooh.. I’m looking forward to the 2nd leads’ story. I like them more than the leads, tbh.

i love and miss shi kye sung and im siwan..perfect pairing..so relatable about subtitles will definately watch it

I had posted about this on my fan wall and I will say this again, I am more excited about the secondary couple here. I'm really happy that there won't be unnecessary love triangles. I feel like a translator's character will be relatable to international drama fans. Netflix should be smart and pick this up. I have only seen Shin Se Kyung in Bride of Habaek and taht show was disappointing as a whole so I can't really blame her for that. I haven't seen the rest of the cast in anything except Kang Tae Oh in clips of Nokdu Flower so I'm looking forward to this drama

I recommend watching Deep Rooted Tree ans Six Flying Dragons. Shin Se-kyung was in both of them and both are very good dramas.

she was also very impressive in rookie historian go hae run..she carried and stole the show in that drama all the awards she got for it were well deserved

I am anticipating this because I am actually quite disappointed with Rookie Historian, not really her but the story isn't really that good. I hope this is a better project for her

Doesn't really sound all that interesting to watch unfold for 16 episodes tbh, but a translator type of job (Hi Sharon Choi!) is interesting as I don't think its been depicted yet in a K-drama!

I watched and put on hold Misaeng recently because it felt too dreary, but Im Shi-wan was well cast as the innocent and hard worker in that show. And he kinda looks the same and its been what 8 years too woah :O