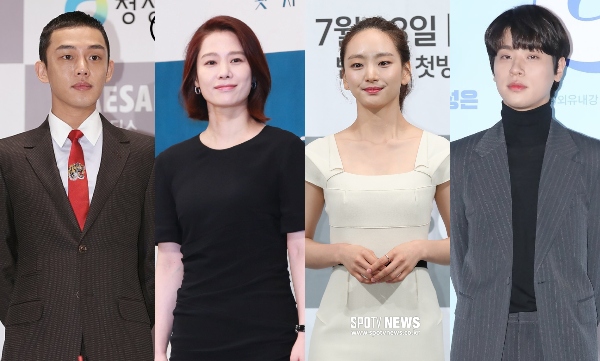 Hell is a supernatural drama series based on a popular Naver webtoon by the same name, drawn by Choi Kyu-seok of Awl. It’s about an unexpected phenomenon that occurs when grim reapers from Hell arrive on earth and appear before people to collect their souls for eternal damnation.

Within the drama, Yoo Ah-in plays the charismatic, mysterious head of a new religious cult that believes the appearance of the grim reapers is a divine sign. Park Jung-min’s character is a broadcasting station PD who pursues the truth about this new religious cult. But as he focuses on finding the truth, Won Jin-ah, who will be playing his wife, has a breakdown due to a yet-unnamed difficult; painful experience.

Kim Hyun-joo will be putting her legal cap back on as she plays a lawyer who stands against the followers and allies of this cult. Yang Ik-joon (Bad Guys: City of Evil) may be an ally of hers, as he’ll be taking on the role of a detective who is investigating the phenomenon of the grim reapers’ appearance.

Information on some of the supporting cast members have been released as well, with two actors having worked with Yeon Sang-ho on his last drama, The Cursed. Kim Shin-rok (The Cursed) has been tapped to take the role of a young mother who is told by the grim reapers that she is bound for hell. Kim Do-yoon (The Cursed) plays a fanatic member of a group that follows the new cult. Ryu Kyung-soo (Itaewon Class) will be playing a priest–who is also enthralled by the cult.

Hell is set to premiere on Netflix, but the release date has not been scheduled as of yet.

The official Netflix English language press releases are calling this one 'Hellbound.'

Hyped about getting to watch Yoo Ahin in a drama again, and this looks so good!

The premise seems interesting and it'd be nice to see YAI in another drama! I am slightly hesitant about the other cast members, but I could be proven wrong.

I enjoy all the actors in this drama, but Yoo Ah In is something else, he has such presence on screen. I can't wait to see it.

Whoa Park Jung-min finally!!!!
I'm just so happy for Yoo Ah In. He's having a fantasy career for his age. No hallyu attached, just pure acting.
Kim Hyun-joo <3.
Won Jin-ah, this is more promising than her latest drama.
Yang Ik-joon the actor/director/writer/sound mixer/editor....

Are you sure this is not a movie? LOL

So many of my faves in one show...truly a "divine sign" haha

This could be good!

This could be really good but I feel it might be too scary for me.

Mmmmm.... so this isn't a comedy? Its a serious piece about a death cult and the grim reaper appearing? Or am I reading this wrong? The synopsis sounds like 'Goblin' meets 'When The Devil Calls Your Name', with the humor and music removed.

Honestly, I don't think this plot or theme will do any of these actors any good. Why do they have to mess up with the occult???? 😩😡
I don't like it, I don't, I don't.

I'm curious when they will film it. Won Jin Ah will start filming Senior, Don't Put on That Lipstick soon.

All these talk of grim reapers...

and no one casted to play a grim reaper?

Maybe the'll be played by extras? The grim reaper could be faceless beings.