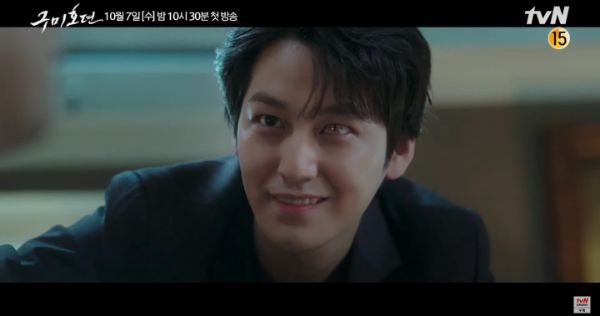 A thrilling new teaser for upcoming fantasy-romance drama Tale of the Nine Tailed has been released. It features Jo Boa (Forest) as an investigative PD pursuing rumors of a real gumiho, played by Lee Dong-wook (Hell Is Other People).

Lee Dong-wook is a legendary gumiho who has protected the Baekdudaegan mountain range since yore. He catches and passes judgement on mysterious monsters that have stepped out of line in the mortal world. Meanwhile, Jo Boa’s character has a burning passion for supernatural occurrences ever since her parents disappeared 21 years ago in a freak car accident. Finally, Kim Bum (Mrs. Cop 2) plays the most dangerous gumiho alive; he’s the half-human half-brother of Lee Dong-wook.

The teaser begins with Lee Dong-wook staring down at something, and Jo Boa’s voice asks, “A monster?” We’re transported to the scene of a car accident on an isolated road, and a man replies, “That person doesn’t age or die.”

There’s a close-up shot of Lee Dong-wook, and in his narration, he tells Jo Boa: “Forget everything about me.” He passes by her at a wedding, and she doesn’t back down, “You’re the only piece of evidence I have.” A flashback takes us to a hazy memory where she remembers a man who looks like Lee Dong-wook saving her on a bus.

In the middle of the forest, Lee Dong-wook and Kim Bum engage in an intense fight. He says, “A man who has succumbed to darkness is no longer anything, let alone a man,” and the teaser ends with close-up shots of the three main characters.

Wednesday-Thursday tvN drama Tale of the Nine Tailed will begin airing on October 7. 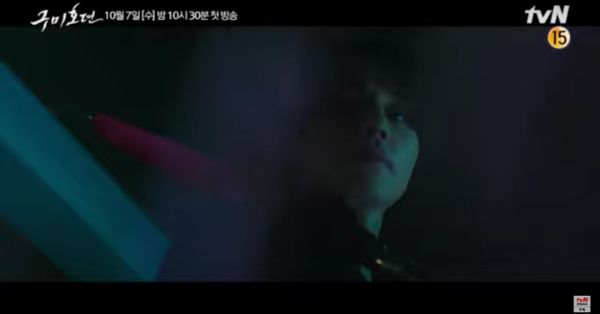 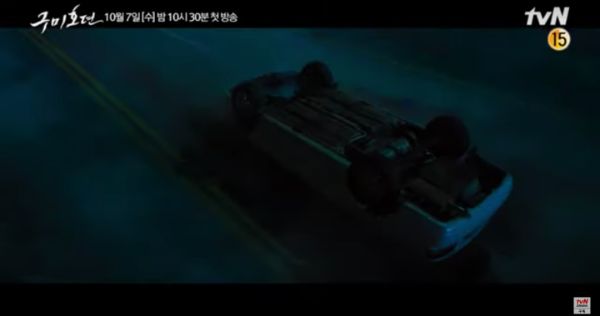 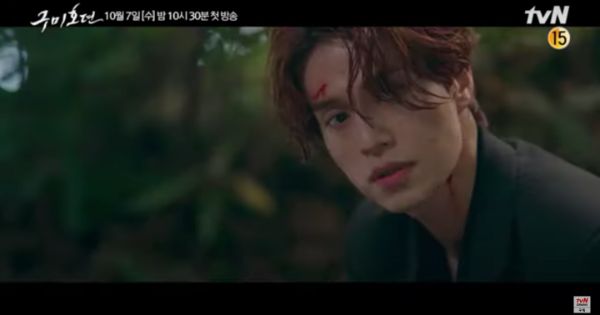 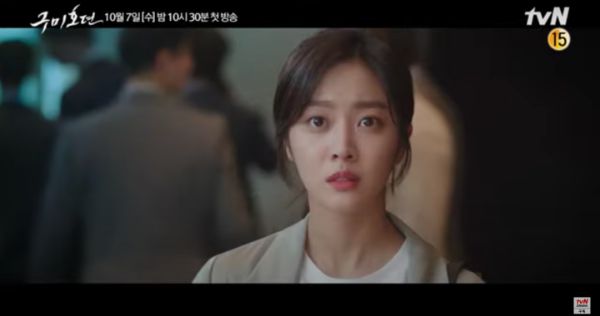 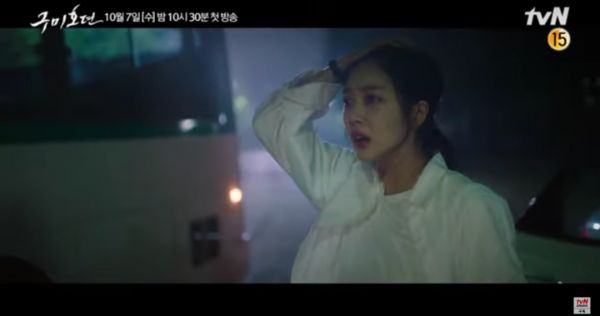 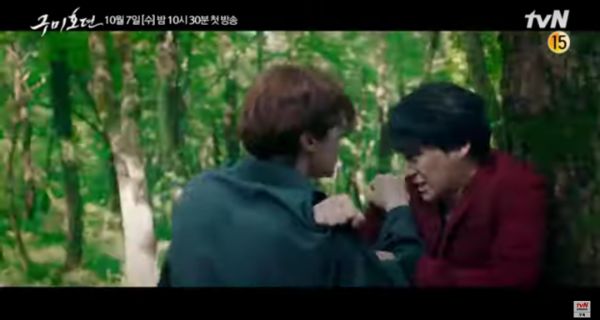 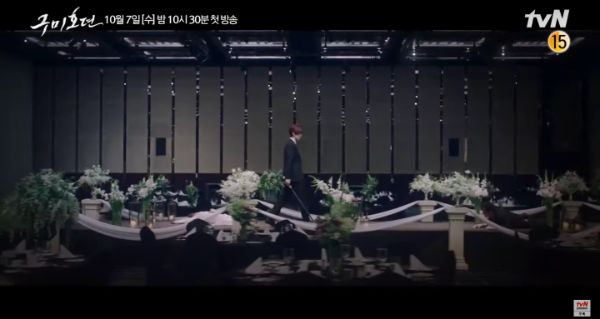 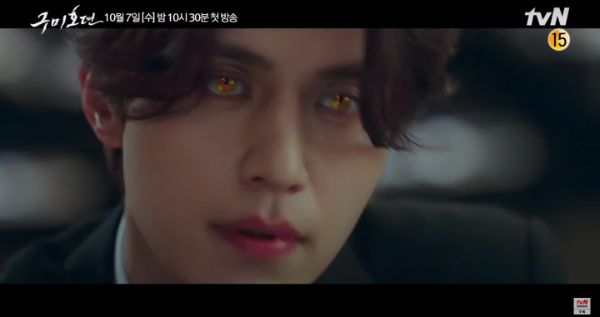 OooOOOhhh I'm already kinda hooked and hoped that it will be good! I love seeing a darker side of LDW~

This has the makings of a piece of top-flight, A-List entertainment but I must admit I am not in the mood because there are so may good character-driven dramas to feast on right now (FoS 2, Do You Like Brahms, Record of Youth), I am in the mood for shows with plainer, less fantastical settings.

I don't like that hair color on Lee Dong-wook.

This kind of looks like a disaster but it's not really my type of drama.

Wow the main lead looks so hot! Can’t wait to watch this drama. Love his eyes at the end. Hopefully CGI will be as good as in this teaser.

These bots are getting more creative these days! @db-staff

I don’t care if it’s (again) two (supernatural) brothers falling for the same woman. If it’s LDW, I’m in.

By the way, no wonder Kim Bum looked like a bad baddie in previous shots. He’s the bad baddie, I guess.

I second! To the first paragraph.

Never seen Kim Bum before in anything.

love Kim BUm and LDW! this is going to be epic for me! i love the gumiho theme and it will be interesting how they present it this time! and the obligatory staring at LDW!

Kim Bum was best in Padam Padam in my opinion. I've seen him in a lot of dramas, but his manner is often shy and quiet. Padam Padam he was stronger and more imposing as a character. I also liked him in the first Unstoppable High Kick series back when he was not much more than a kid and probably still in high school. I've never seen him in any of his films.

I have not watched Padam Padam. Will check it.

it is worth checking!

October 7 it is! I hope this is on Netflix! In Europe!

It’s on Viki. I’ve already added it to my list.

i've only seen kim bum in bof. he just hasn't been in any projects that caught my attention, ig. but he was my fav in bof and really wanted to see more of him. I've loved lee dongwook since my girl. jo boa was kinda only good in her debut drama. buuut, I'll be sure to check this out maybe halfway through. the men just looks to spicy for me to not check it out.

DAMN do they look awesome. I totally miss Kim Bum and glad to see him back on our screens again.

Excited to see so much pretty! And in a supernatural setting is a big bonus! I am in the mood for a fantasy to balance out the fluff romcoms, melos, mystery and dramas I have been watching recently.

The King IG Bromance is back! This time without the hat.

Kim Bum looks like Damon Salvatore from Vampire Diaries and I’m HERE for it. Btw don’t take it wrong, as much as Kim Bum reminds me of Damon, Lee Dong Wook is my favorite actor. I’m Team Reaper— sorry, pure blooded Gumiho.

They do know that LDW looks "Otherworldly". :-D

I was Team Reaper, thorough and thorough!

@123gog45 Have you ever read The Vampire Diaries novels? I read them years ago but never watched the series.

I watched the series. Even if I was a book worm I never got the chance to read the novels.

I read the novels when I was in middle school. The series was continued but they weren't written by L.J. Smith.

Oooh I forgot about Kim Bum, excited to see him back on screen...

And now I am getting Twilight vibes, LDW's hair color, saving girls in/from accidents, supernatural "brothers" fighting in the woods... please be good, show. I crave a good fantasy/suspense/romance thriller. Minus the damsel in distress, please.