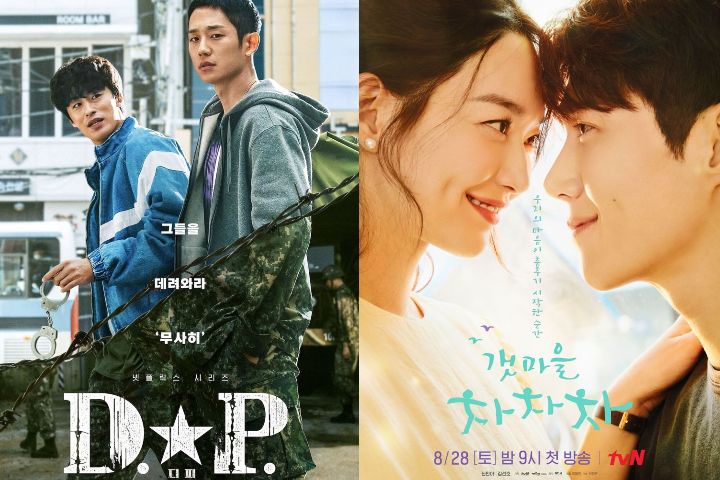 It’s time for the first wave of premieres as the autumn onslaught begins! This week we have Netflix’s latest original — an emotionally heavy military drama — and the highly anticipated tvN rom-com featuring dimples, more dimples, and seaside cuteness. I’ll take both, please.

Reasons to watch: Netflix is becoming famous (or is that infamous) for their more dark and heavy take on K-drama content, and D.P. looks like it will be no exception. Jung Hae-in and Gu Kyo-hwan form a deserter pursuit team, and it’s their job to locate and bring back military personnel who’ve gone AWOL. Without even seeing a minute of this show I can picture all the heartache and moral dilemmas already. I’m a big fan of Jung Hae-in, and I love a military story, so even though I don’t really want my heart to be crushed by yet another depressing drama, I don’t think I’ll be able to say no to dog tags, camo, and raw emotion. 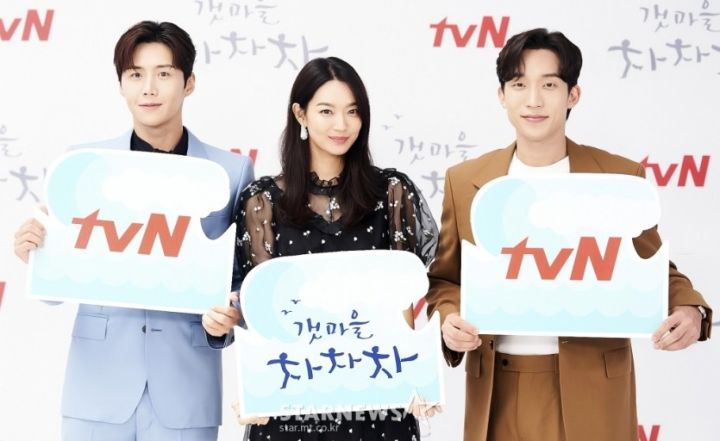 Reasons to watch: tvN dramas generate a lot of buzz, but there was something about this rom-com, and the promise of Shin Min-ah and Kim Sun-ho, that raised both expectations and interest. Recent promos have given us a pretty good sense of what to expect with the dynamic between these two: the city-chic woman who attracts attention in a tiny village, Kim Sun-ho’s exasperation with her wackiness, and the promise of the squabbles, hijinks, and attraction between them. The drama looks beautifully shot, the leads look amazing, and I’m as excited for a refreshing seaside setting as I am the opposites-attract romance that’s (finally) heading our way.

Well, I at least learned from the trailer what 'cha-cha-cha' means. Apparently, the heroine asks to borrow the hero's car (jadongcha) but he mishears what she said. She repeats 'No, cha. Cha-cha-cha' and her attempt to mimic turning the steering wheel looks like she's dancing the cha-cha. I wonder how well that joke is going to survive subtitling.

Thanks for clearing that up.

The heroine instead of saying jadongcha (car), shorten it to "cha" which In korean "cha" is tea.

Finally!! I have the feeling that I waited so looong for them! I'm so excited!

The wait is over! How to choose between bromance and romance? I'm in for both 😁

Dimples and desertion, I am here for it.

Oooooooooooh, I am READY for this!!! Happy weekends ahoy!

AHHHH i’m so excited to see JUNG HAEIN again!!!! the trailers for DP look so exciting, and although romance usually grabs me there’s something about DP that makes me so interested, Friday can’t come soon enough!!

I am in for both dramas and pleased that both will be available on Netflix US.
I believe that all six episodes of D.P. will be released on Aug. 27 and that CHA CHA CHA episodes will be released S/S beginning Aug. 28.

(O/T the third upcoming drama on my list is the sageuk RED SKY/LOVERS OF THE RED SKY (Viki US) which will air episode one on Aug. 30).

D.P. wasn't even on my radar but the promo for it was really good. I'm interested in seeing Jung Hae-in in a non-romantic role.

I really like Shin Min-ah and Kim Sun-ho so was excited for Hometown Cha-Cha-Cha, but I found the promo material pretty meh. I want to fall in love with a rom-com, it's been so long, so here's hoping it turns out to be charming and fun with enough story.

shin min-ah! (rewatching my girlfriend is a gumiho)cha cha cha! this feels so good!

kim sun ho is the whipped cream on top!

You didn't watch Prison Playbook? Jung Hae-In has a nice family relationship with Jung Moon-Sung aka Dr. Do Jae-Hak from Hospital Playlist.

why yes i did! thanks for asking!

YES YES YES. It’s been so long since I’ve been this excited about both the upcoming shows. Can hardly wait to watch either. This weekend’s about to be amazing.

Shin Mina and Kim Sun Ho are PERFECT for these roles!!
*finger hearts*

It feels like I am not watching enough kdramas these days. I hope Chachacha is good!

Are you recapping Chachacha? @missvictrix

13 parkchuna is still an Errant 🫘

YES bring it on HaeIn and Dimples Duo! I’m so ready for both dramas. But DP only has 6 eps - i hope it’s not cos they gonna leave me waiting for a 2nd season.

YES YES and YES!!! Finally it's here! Bring on the dimples and cuteness 💕💕💕

I have watched the first episode of HOMETOWN CHA CHA CHA and it looks like it will be a good romcom.