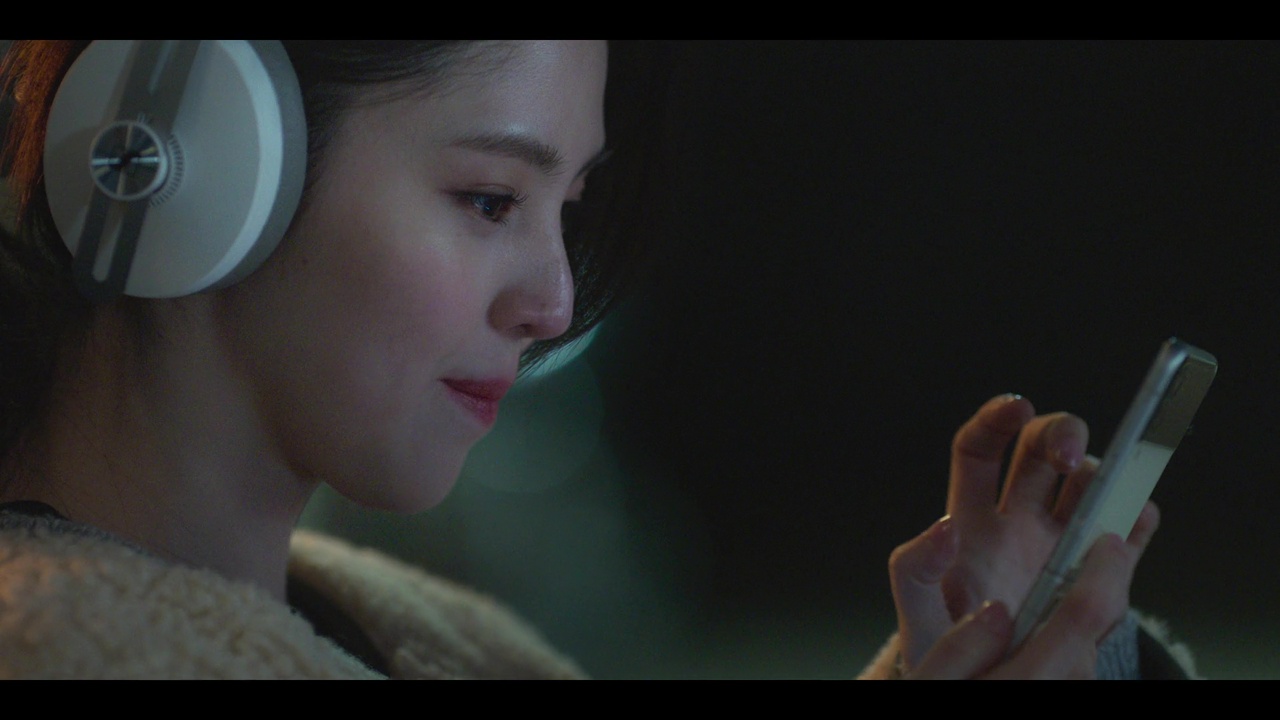 Our photographer’s longing for his best friend to really notice him continues, as does her quest to understand and put into words the feelings he’s experiencing all too intensely. Will she figure it out before he has a chance to open up, or will he find the courage to bare his heart first? 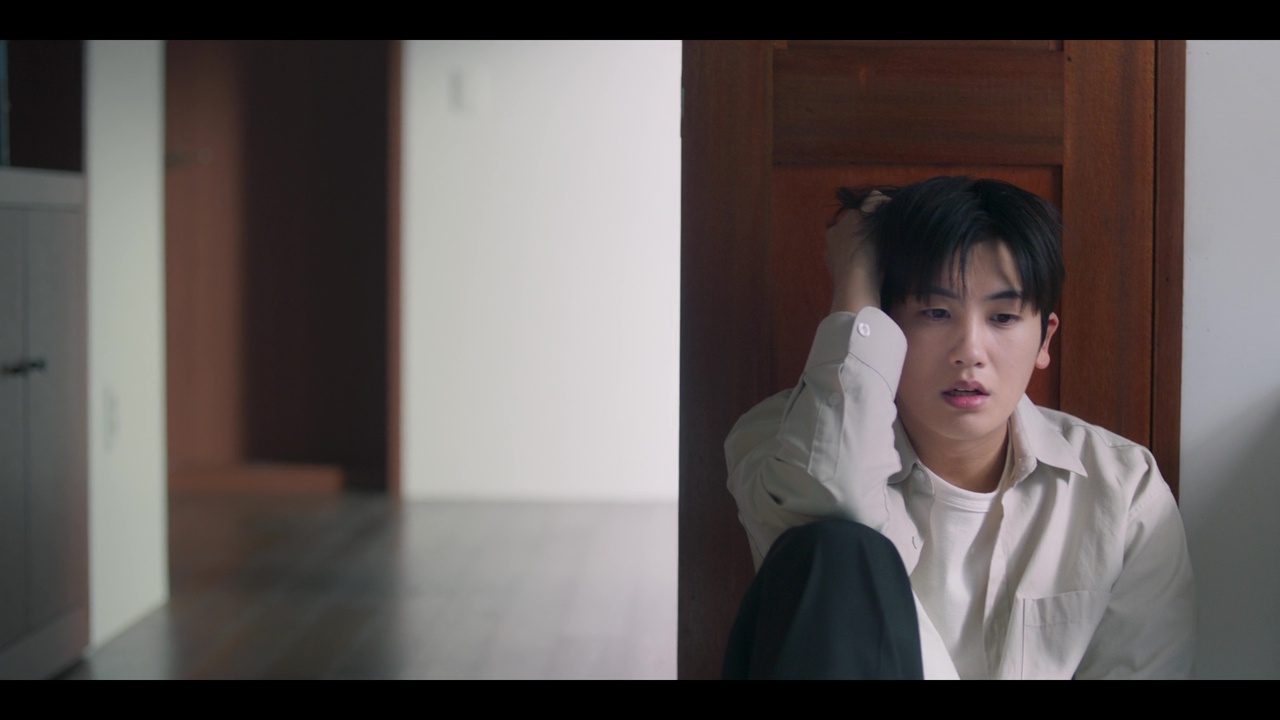 After waking up in each other’s arms, Sun-woo and Eun-soo spend a few moments in awkward silence, and then decide it’s best to move on with the day and pretend it didn’t happen. Still, while Eun-soo washes up, Sun-woo agonizes over whether she might have heard him whisper in frustration that their closeness was driving him crazy. She totally did, but doesn’t let on.

Avoidance in general seems to be Eun-soo’s way of coping with feelings or problems that confuse her. Thus, when she hits writer’s block, she decides it’s time to take a walk, which leads into a coffee break and then a drive – which she’s terrible at, having to be continually reminded to watch the road. 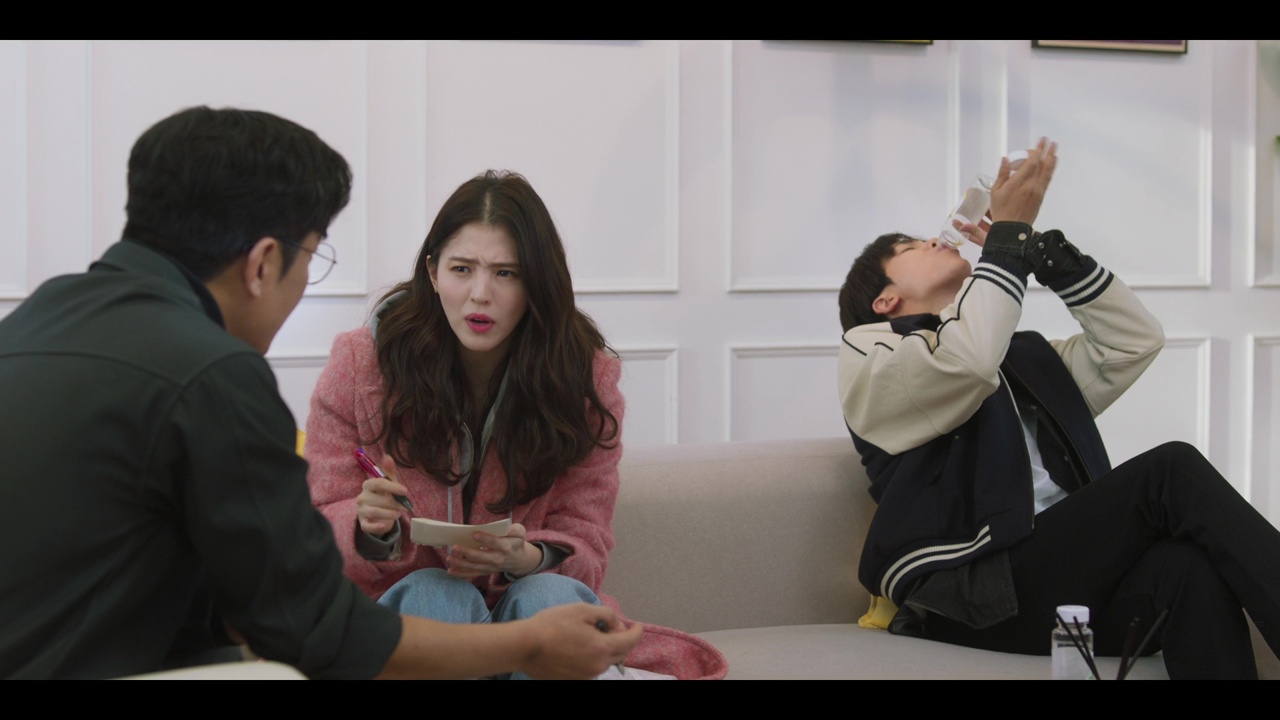 Sun-woo, of course, tags along. That means he’s with her when the composer calls her in for a quick meeting to discuss the direction of their song. The fact that the composer gives her tangerine juice without asking her preference annoys him (her mom sends her boxes of tangerines from Jeju all the time, so she’s sick of them), and he decides to handle it by being childish and disruptive, for some reason.

They quarrel over it, but she shows up at his studio with flowers and a gift to apologize. But it’s more for the sake of clearing the air than anything else, because neither of them likes to stay mad at each other for long. 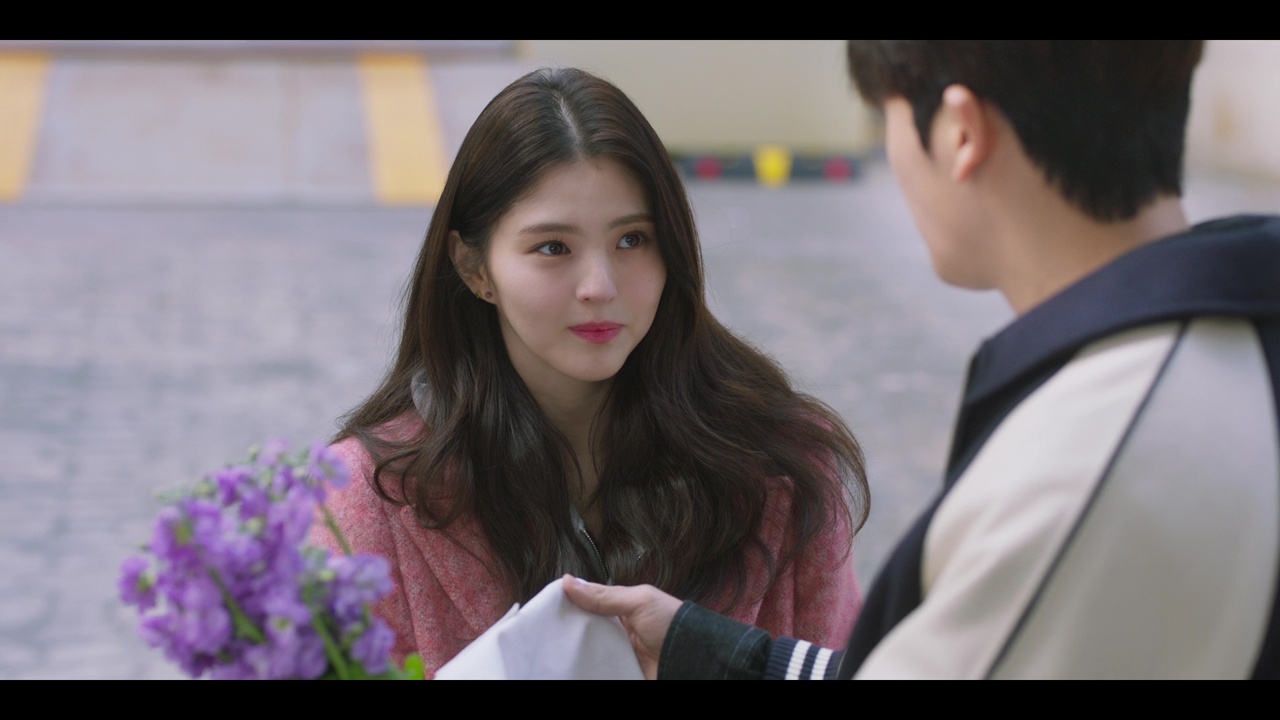 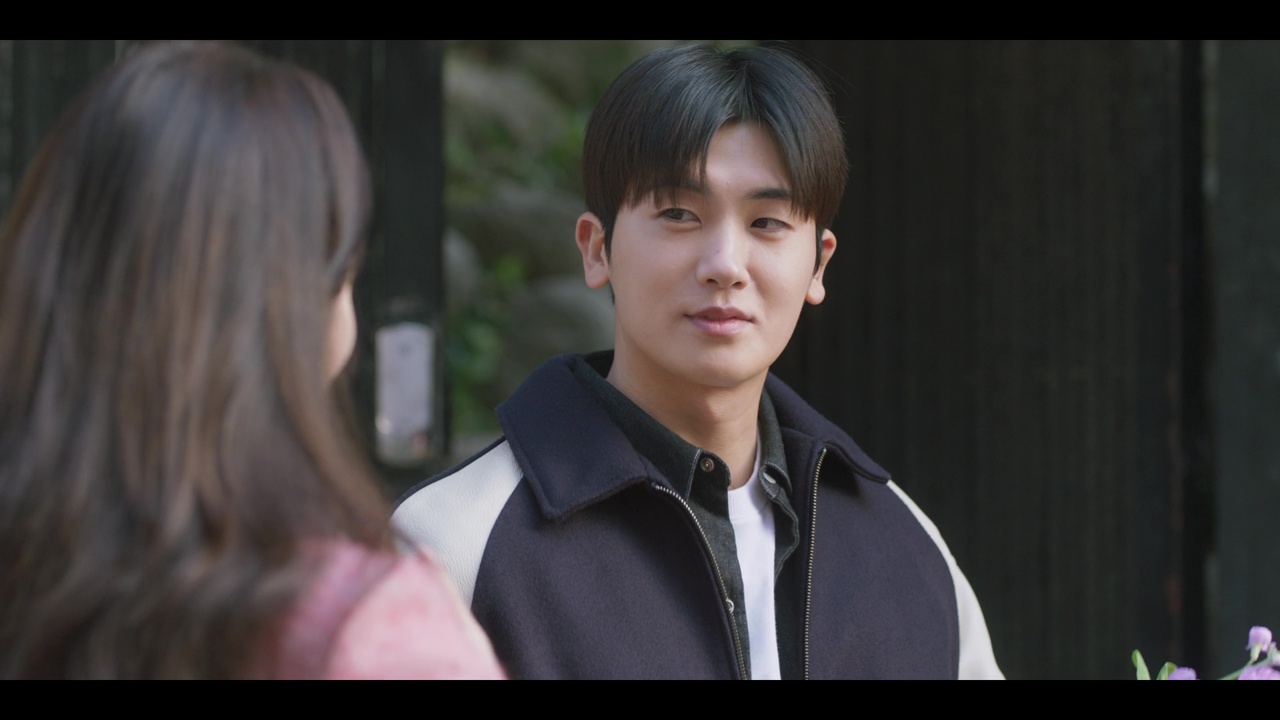 The cinematography in this show continues to be visually stunning, though something about this episode didn’t quite match the tone of the first to me. I missed that pensive, melancholic atmosphere. It did return by the end of the episode, but first we took a detour through a few more rom-com tropes like going grocery shopping together, wherein Eun-soo piles the cart high with way more food than they need.

Then they return to Eun-soo’s home after dark and find her mom (played by Lee Jung-eun) waiting for them, having already discovered Sun-woo’s things lying about the place. She glowers as they hastily jump to explain the situation, but then she sits them down and spreads out a deck of tarot cards. Ha, this is apparently a new hobby for her, so it comes completely out of the blue for everyone. 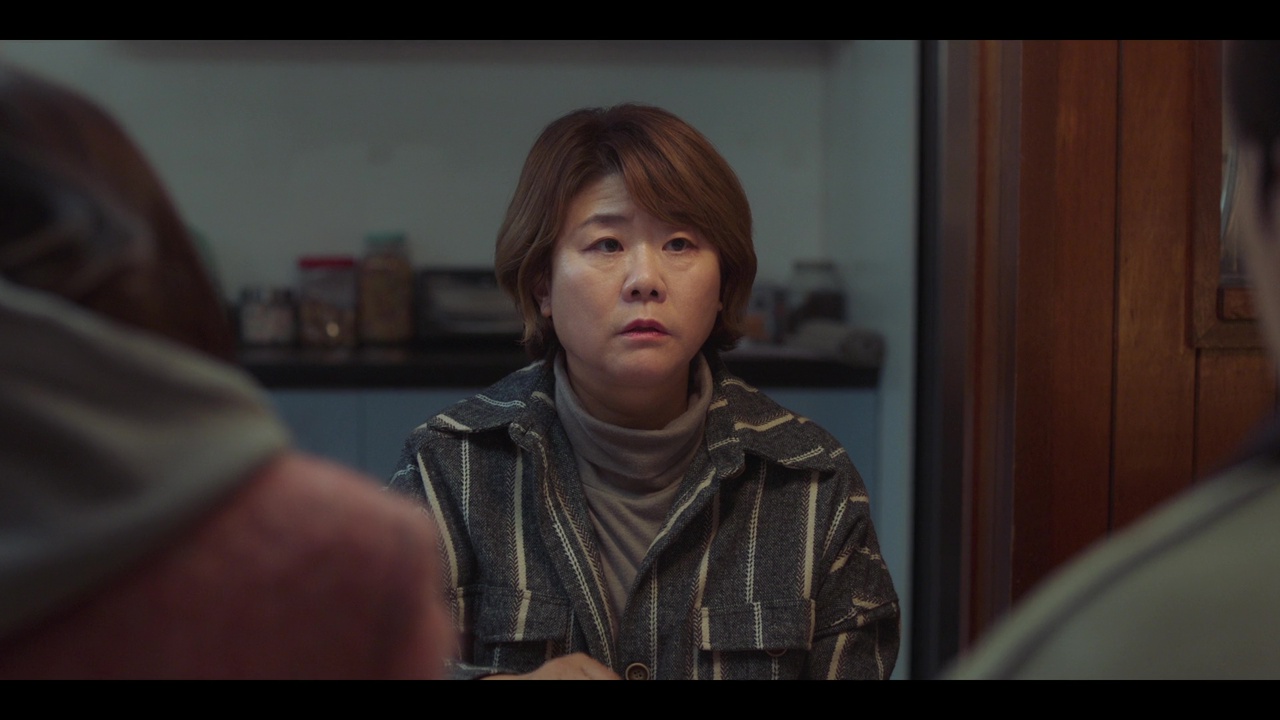 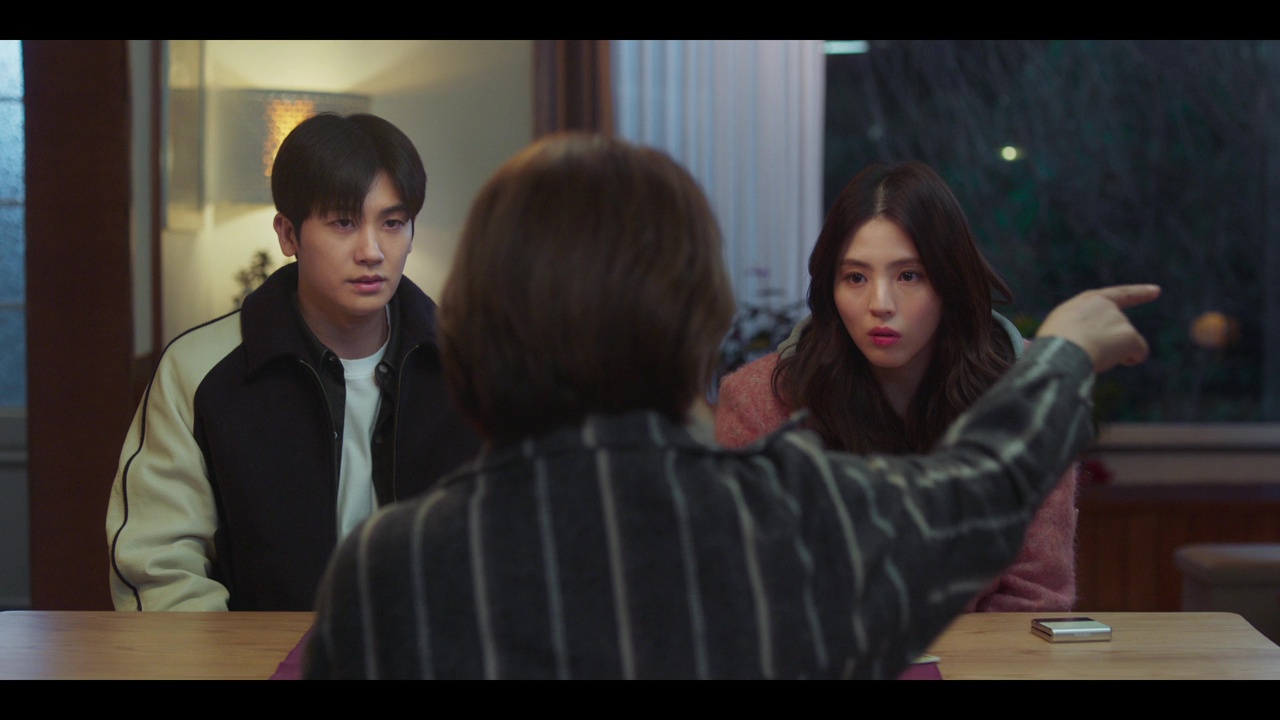 Sun-woo’s cards tell her that he has a sincere, enduring love for someone… who’s very far away. But Mom’s gaze travels from his face to Eun-soo as she says it, and she’s suddenly in a very big hurry to leave. On her way out the door, she gives Sun-woo the card that indicated his love was far away, as a good-luck charm. Aw, she definitely knows.

Throughout all this, Eun-soo is still working on trying to grasp the concept of unrequited love. The composer describes it as the chill of being outside at 4:40 in the morning, so she drags Sun-woo outside for a 4:40 am walk to feel for herself what that’s like. 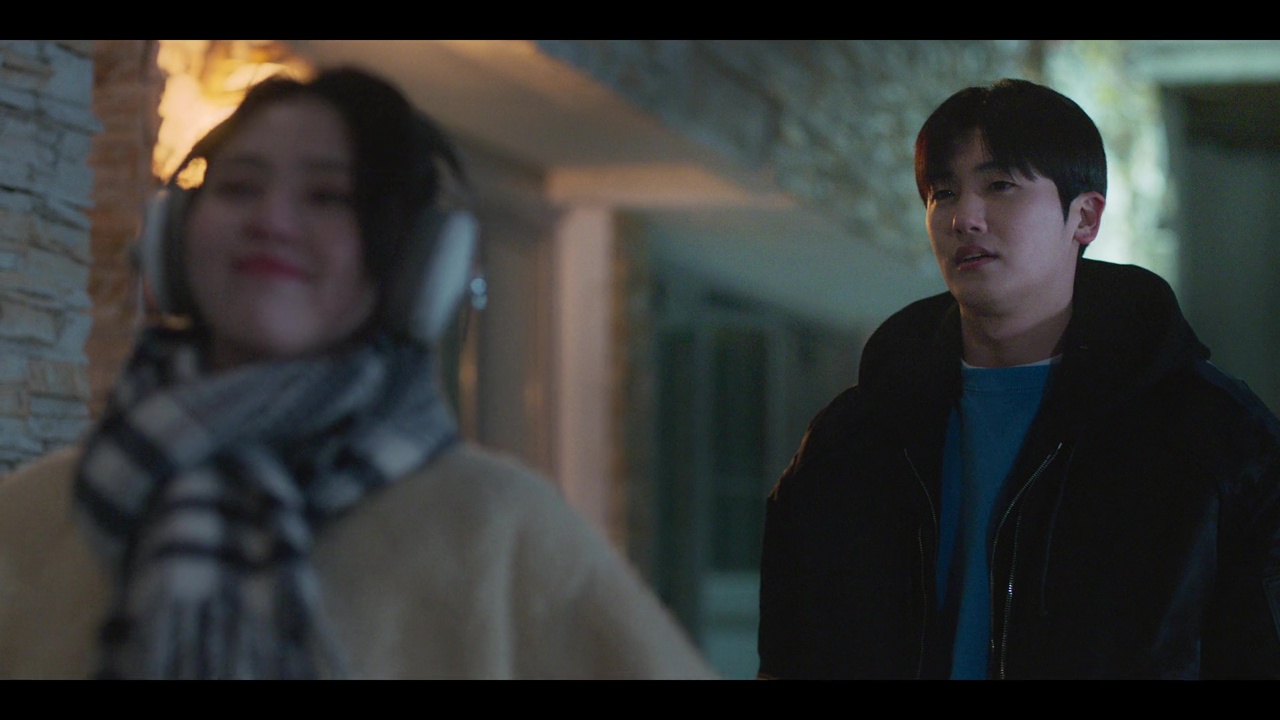 Sun-woo, meanwhile, clarifies that unrequited love is painful, not because of what one wants from the other person, but what one longs to do for them. Which is to give them everything they want.

In the moment, Eun-soo wants chocolate – so chocolate she gets – but throughout the days they spend together, he constantly goes along with her whims, even if he initially grumbles about them (like that 4:40 am walk). Eun-soo remains oblivious, not even seeming to notice how he panics when she does things like grab his hand, or how listening to the demo of her song gets him lost in his feelings. 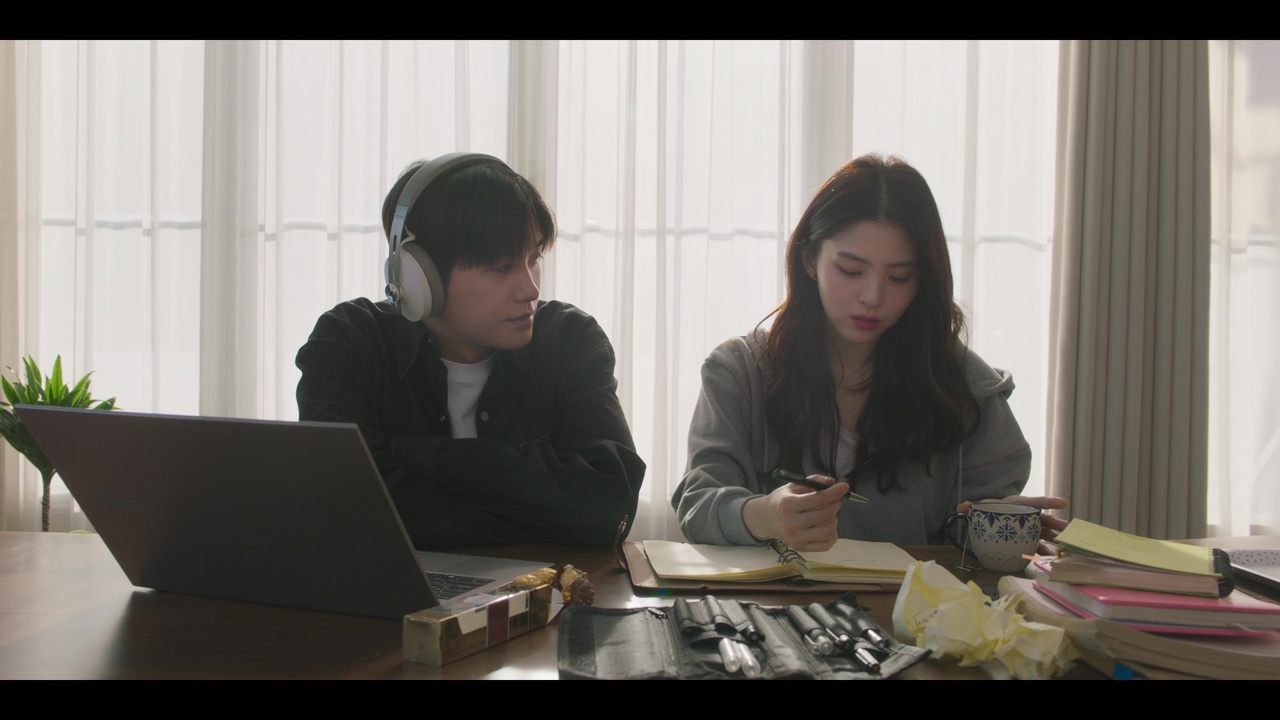 To be fair, Sun-woo plans to tell her soon, but we only have four short episodes to work with, so the secret is bound to come out before he’s quite ready for it to. While he’s in the shower, his assistant calls needing a file to be sent over from Sun-woo’s computer right now, so Eun-soo sends it to him.

While she’s there, she goes on a hunt for the old photos of her that he said he deleted to make space on his computer. She finds them easily enough, along with other photos he’s taken of her over the years. Seeing herself through his eyes – er, lens – gives her pause, but she doesn’t have much time to take it in before he catches her in the act. 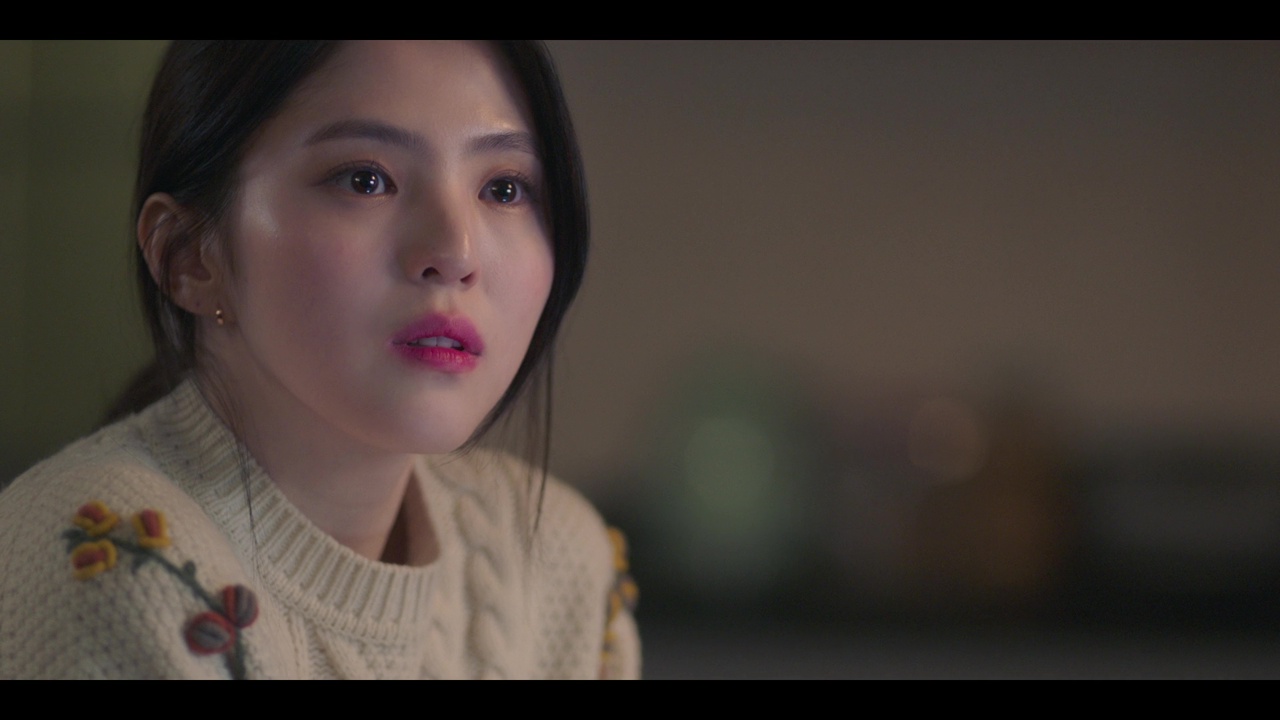 I totally loved this episode and the show itself. I really had hope this show will be emotional one. I still shoutout to the main leads Han So-hee and Park Hyung-shik so much and I wanted to have a happy ending by the end of this show.

I knew it was for early morning walk, that's what I mean.

I bet Eun-soo writing a song The Distance Between You and Me.

By the opening of episode 2 of four episodes, Han So-hee had a English thank-you and I knew I am so proud that she struggled to speak English. I also knew that Park Hyung-shik improved English too.

So she knows now. It is kind of creepy how many photos he has of her now. That being said they have a great friendship, so I hope they continue to show that despite the crush. Also his descriptions of one-sided love for her song are really sweet. I loved the cameo with the hardest working actress in S.K. Lee Jung Eun.

Seo In Guk is also supposed to do a cameo for this kdrama, but since he has covid19, that might not happen.

I don't actually think it's creepy. I take pictures of all my friends all the time especially if I find them photo worthy, so if you look at my computer you would find as much photos of some of my friends

Not a singular friend you have a crush on, but some of your friends. That is what makes it creepy to me.

Generally, I agree with you but since he is an art photographer, she may be as much is as much muse and inspiration as romantic object. Less stalkerish in that way, perhaps.

I would say more but I have not actually seen the show cuz, you know, Disney+ sucks.

Disney+ is dropping the ball when it comes to promoting K-dramas/K-content. I feel like they could've a potential cash cow on their hands, but they don't even have a specific fan community like Netflix has. One thing, I did read that Disney invested a lot of $$$ (like about a hundred million) for K-dramas. So, clearly they know the value, I assume b/c its a new market maybe in 2-3 yrs time one of their shows might hit it big and hopefully they'll start promoting it better and it'll be same time/day.

For a drama that was named Soundtrack, I can't remember any of the songs at the end of the episode... They needed Our Beloved Summer's musical producer who really chose songs that suited the drama.

For the story, it's cute but nothing more.

For a 4 episode drama, they compressed the story but nevertheless it delivers the important and romantic details. Park Hyungsik and Han Sohee just aced their portrayals. This kind of genre and with top caliber actors, ST #1 should have at least 12 full episodes to maximize the commercial value of the drama. Still, ST#1 is a great drama, first in a musical drama concept, very relatable and amazing visuals. Highly recommended especially to the hopeless romantics.

I’m liking the softness of this show. And the length is perfect too. I kind of wish they released it all at once though. Ot would be a good one to just binge watch.

This episode didn't do much for me... for me the drama quite bland. And I find it pretty unrealisting that a person twhose job is writing finds it soo difficult to understand such simple emotions. The lyrics of the demo song were really silly. No wonder the producer didn't approve them.
Plus, they did one of the things I hate the monst in dramas... making the ML act stupid and rude just because he is jealous. That is not cute.
The drama has its moments and it's really soft and pretty... but that's all for me. Isn't it supposed to be a musical drama? Where is the music?

Late response, but while I absolutely loved the first episode, I also found this one a bit disappointing. The first ep nailed its soft pretty tone while this was a bit all over the place. Individual scenes were cute or funny and well-acted but edited together it didn’t work as well. Both leads were likable in ep1 and less so here. Eunsoo was too manic pixie dream girl and Sunwoo’s jealous moments were funny but also made him childish.
As for the music, I do like the soundtrack but I think the music is way less of a focus than the marketing team and title led us to believe.